10 Best Wolf Moon Tattoo Ideas You Have To See To Believe! 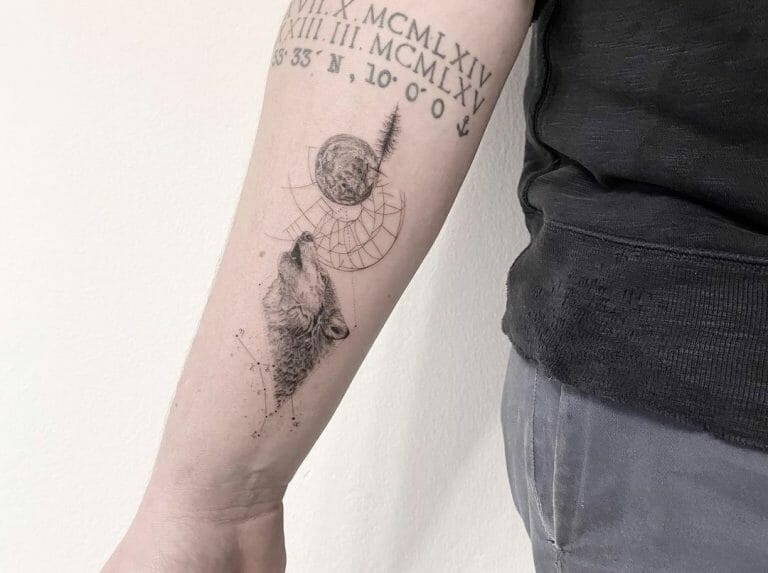 Thinking of getting some unique wolf tattoos? Check out some of the best moon wolf tattoos for you to experiment and select from!

Wolf tattoos are a popular design for animal tattoo designs.

There are many ways you can get wolf tattoos on your body. It could be a snarling wolf tattoo or a wolf pack tattoo.

If you don’t want to get the snarling wolf or wolf pack tattoo ideas for your next tattoo design, you could get a moon wolf tattoo. What do wolf and moon tattoos mean? The wolf is very popular among native Americans. Even before the stories of little red riding hood, the native American tribes, the wolf symbolizes intelligence. These are tribal symbols associated with life, death, rebirth, and divinity.

She-wolf symbolizes femininity, loyalty, unity, and other meanings. This is a famous tribal symbol among other tribal symbols. There has been a myth surrounding the wolf and moon for a long time. The wolf tends to howl during the full moon, according to some legends. Due to this, the wolf moon is a popular tattoo design concept too.

Let us check out some awesome moon wolf tattoos here. The moon is considered a feminine symbol of power, creativity, transition, and growth, and getting a moon tattoo could also help you feel these emotions. The time taken for a wolf tattoo may vary depending on the size and detailing required for the tattoo.

There are different ways to get a wolf tattoo. A lone wolf tattoo has a particular strength of its own. Among the various wolf tattoo ideas, this wolf moon tattoo of a lone wolf will look good on your skin. The tattoo artist has drawn a full moon behind the majestic wolf tattoo. There is also a stream and a forest seen beneath these animal tattoos. This art style involves a moon, stream, and wolf. The dark shade behind the full moon represents nighttime. The wolf eyes are light blue giving it a unique touch to the whole wolf tattoo. These types of moon wolf tattoo designs also make perfect sleeve tattoos for the arms.

Wolf Howling At The Moon Tattoo

Howling Wolf In The Dark Forest

This is also a wolf with a moon tattoo. In this tattoo design, you can see a howling wolf again. The lone wolf is howling at the moon in the deep dark forest. The trees in the forest are done in black ink lines. The lone howling wolf symbolizes the deep meaning of the strong and independent personality of the wolf. A wolf’s howl is part of its primal instincts. But here, the howling wolf represents strength, free spirit, and connection to the wilderness. If you are a fan of howling wolf tattoos, these types of tattoo designs are ideal for your next animal-inspired ink. The wolf side of your personality is shown off beautifully in this howling moon wolf tattoo.

There are various wolf tattoo ideas to get this animal motif tattooed on your skin. In this wolf tattoo, the wolf is seen standing on a high stone. The moon and forest cover the body of the wolf. The wolf tattoo’s meaning is very profound. The deep meaning relating to this wolf tattoo is spiritual protection, loyalty, and strength, all of which are part of the wolf’s nature. The hidden meanings of wolf tattoos are also devotion, luck, love, and family. This spirit animal is an excellent tattoo idea for you. This particular wolf tattoo would look really good on your lower arms. The wolf in this tattoo design has a tribal style in its design.

Mixing two contrasting ideas is popular among various tattoo ideas. You see something substantial and something elegant mixed together. In this wolf tattoo, the angry wolf is surrounded by floral designs in thin black lines. The image of the angry wolf and the elegance of the flowers make this wolf tattoo among some of the beautiful tattoo designs. The wolves tend to be a powerful symbol of strength. Flowers, as you all know, are a symbol of beauty. When these two ideas get mixed, amazing wolf tattoos like this are made. This would make a perfect wolf hand tattoo since these types of tattoo designs are small in size. If you like such contrast in wolf tattoo ideas, this one might be worth checking out.

The howling wolf tattoo design is back again. In this howling wolf tattoo, the wolf is seen howling at the moon at midnight. A wolf howling at the moon tattoo meaning can be different from that of the original reason. In reality, a wolf howls at the moon to communicate to the wolf pack. The pack wolves send messages through this howl. In this tattoo, the meaning of the howling can be of the free-spiritedness and the closeness one has to the family. Just like the wolf pack, the bond between the family can be represented through such tattoo ideas.

This simple wolf tattoo has the head of the wolf looking straight ahead. The rest of the wolf’s body has the image of the forest with closely tied up trees. The large tattoo of the wolf and the small design of the forest make this an awe-inspiring work of art. This can be made as a sleeve tattoo for your arms and legs also. The eyes and the wolf’s look in this wolf tattoo show off the power this animal holds. The wolf looks solid and fearless in this tattoo design. Simple tattoo designs like this are a great way to get wolf tattoos on your body. Do you feel like getting this wolf tattoo on your body?

For those looking for other ideas regarding wolf tattoos, here are some more Wolf tattoo ideas for you to check: