101 Best Wolf Head Tattoo Ideas You Have To See To Believe! 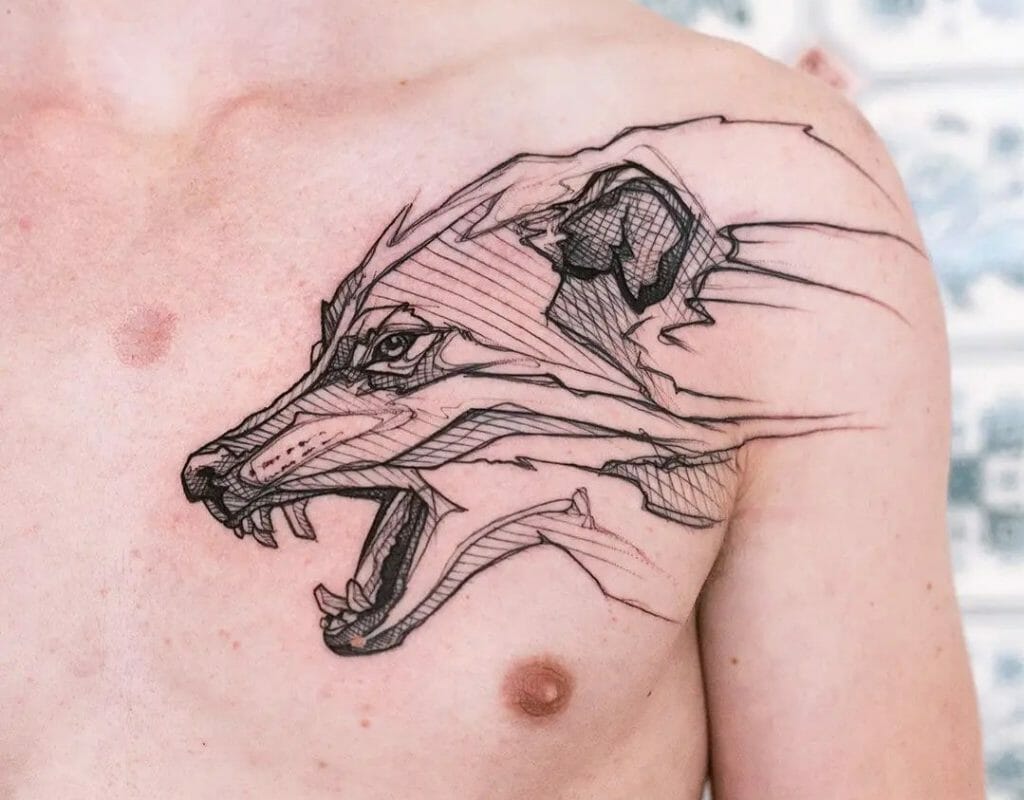 A wolf head tattoo can have a variety of meanings. Heads represent death, whereas wolves are known as protectors.

A wolf with a head in its jaws, on the other extreme, could indicate your reasonable ‘human’ self-being overwhelmed by your wild and uncontrolled ‘wolf’ aspect of your nature.

It’s also a sign of conquering inferiority and gaining fortitude, especially in the face of loss and suffering. Wolf tattoos are one of the most popular designs from the perspective of history. Wolf is revered in many civilizations and cultures. Wolves always live in packs, have significant familial bonds, and have been loyal animals throughout history. Because of its trailblazing and guiding qualities, it is frequently employed as an emblem of spiritual guidance. Wolves are thought to be extremely powerful and can survive in challenging environments. To depict this wolf tattoo meaning, people often get stunning wolf tattoo designs on their body.

Wolf head tattoos are among the most popular types of wolf tattoos, mostly among guys. They are suitable to be placed on any part of the body as they look beautiful in any size and design. Wolves have exaggerated facial expressions that convey a wide range of emotions and ideas. If you wish to get a wolf tattoo, you can take into account how you want others to perceive your wolf tattoo and what it says about you. A snarling wolf, for instance, indicates your frightening appearance and more combative side, while a wolf with a calm attitude appears more distant, secretive, and mystical.

The lone wolf represents someone powerful and self-sufficient. A lone wolf is a wolf who does not belong to a group. These wolves are more deadly than group wolves because they are more formidable. In this tattoo, the wolf’s skull is coming out from the middle of the wolf’s face and mouth. It looks both scary and threatening at the same time. The bold black ink lines look stunning. A lone wolf tattoo could be ideal for you if you have lived a similar life, watching out for yourself and prospering alone through your abilities.

If you want animal tattoos that aren’t too serious, this wolf head tattoo is great for you. While it’s to a realistic wolf head tattoo, there is a funky, cool side to it. This cartoon-like depiction of a wolf tattoo shows the green wolf sticking its red tongue out. The wolf’s eyes are yellow, just like its fur and there are sharp teeth protruding from its mouth. In nature, wolves are scary and dangerous, but this portrays the wolf as a hilarious character.

This traditional wolf tattoo is inked in black and grey with red hearts in the place of his eyes. The hearts are coming out of the wolf’s eyes, and there are hearts around his mane and on his head, as well. This wolf tattoo has a start contrast. On one side we see the sharp yellow teeth, and red tongue out to devour its prey, but the eyes and red hearts add a bit of romantic whimsy to it. The tattoo uses black shading to create depth in the tattoo. It is well suited for men as well as women. You can place this tattoo on the forearm, as show here.

This wolf head tattoo is scary and captivating to look at. This wolf head is inked entirely in curved black lines. One right side of the wolf’s face are abstract lines where the eye should be. This ink tattoo is placed the stomach, but it would fit wonderfully on the arms or back as well. Wolf tattoos often stand for loyalty. All animals in the wild are naturally afraid of the wolf because of its fantastic hunting skills.

This wolf head tattoo is carved in black ink with yellow eyes. The wolf is shown with an open mouth as he is growling with his head facing upwards. The long teeth that the wolf uses during hunting makes this tattoo intriguing. The wolf has a death stare, perhaps aimed at the prey. If you want a colourful howling wolf tattoo, you can consider this tattoo.

The wolf’s head can be seen holding a rose in his mouth. Wolves are generally portrayed as a howling wolf or on a hunt or snarling wolf, but this shows the wolf is playful with a rose in his mouth. The red, black, and grey colors look bright and stand out well. The black colour of the traditional wolf tattoo contrasts with the red rose. You can use this design as part of a bigger wolf tattoo sleeve on the arm or leg.

While this tattoo is placed on the arm, it can also be made on the chest for men, which is a great and cool style. Men typically opt for chest tattoos since they provide ample space for intricate patterns. You can also get a whole wolf tattoo stretched across your shoulder and bicep for more effect. A howling wolf on the opposite flank of your chest is a classic choice, as it places the animal exactly above your center.

This cool wolf tattoo is made with bold lines on the forearm. The wolf’s eyes are red and bloody match the wolf’s tongue and the red rose behind it. The entire wolf tattoo is inked in thick black ink strokes, contrasting the sharp, white teeth. A wolf pack tattoo idea done in the American traditional wolf tattoo style can make you stand out and pack a punch.

A competent artist can add a sense of force, ferocity and intrigue to your tattoo. This tattoo design can put you in a trance. This wolf tattoo is prominently placed on the chest and is inked in dark grey and bright orange. The wolf depicted here as two pairs of eyes, one below the other. The bright orange depicts the wolf’s whiskers while his mane is entirely in grey. This tattoo looks wonderful placed on the chest, but you might be able to create a similar design on the back as well.

Leg tattoos have become increasingly cool and fashionable in recent years. Leg tattoos offer plenty of room to your tattoo artist to develop a distinctive wolf tattoo design. This wolf design has blue eyes and a red tongue between its sharp teeth. The rest of the wolf head is inked black brush strokes.

The ideal placement for a wolf tattoo can vary depending on your preference and the size and detailing of the tattoo. The pricing of a tattoo depends on the size, artist’s experience or fame, design, and the colors, if used. A forearm tattoo can be more expensive than wrist tattoo as it covers a bigger area, but it also depends on the size of the piece. A detailed and intricate wolf tattoo would take more time to ink as compared to a simple outline design.

A wolf is the symbol of strength and determination. When it is in the pack it strives to be a good member and protect the weaker members of the pack. Here are a few more ideas you can play around with before you get your very own wolf head tattoo.

Still looking for inspiration, then checkout this blog post about head tattoo ideas.

What does a wolf head tattoo represent?

A wolf head tattoo typically symbolizes strength, courage, loyalty and protection. It is often associated with the idea of a lone wolf that stands alone against adversity. It might also represent the wearer’s connection to nature and their spiritual journey. A wolf head tattoo can also be symbolic of family or community spirit, representing unity among those who have gone through the same experiences. It can also have a deep personal meaning that is unique to each individual wearer. Ultimately, wolf head tattoos are a powerful way of expressing one’s identity and values.

What are the different styles of wolf head tattoos?

Wolf head tattoos come in a variety of styles, ranging from realistic to abstract designs. Some can be done in black and grey or full color, while others may feature stylized elements such as tribal swirls or geometric patterns. Wolf head tattoos are often depicted with other animals like bears, eagles, and horses to create a powerful image.

How much does a wolf head tattoo cost?

The cost of a wolf head tattoo will depend on the size and complexity of the design, as well as the skill level and experience of the artist. Generally speaking, small tattoos can start at around $50 while larger pieces may cost several hundred dollars. Prices may also vary depending on where you are getting your tattoo done. It is important to shop around and find an experienced artist who is comfortable with the style you have in mind. With a bit of research, you should be able to find a professional tattoo artist who can create a beautiful wolf head tattoo for you.

How do I take care of my wolf head tattoo?

Aftercare is an important part of preserving the beauty of your tattoo. Immediately after getting it done, you will need to apply a thin layer of antibiotic ointment such as Neosporin and cover the area with a bandage. You should also keep the tattoo clean and moisturized with unscented lotion or coconut oil, and avoid picking or scratching at the scabs. Regularly cleaning the area with a mild soap and warm water is also essential for keeping your tattoo looking vibrant for many years to come.