101 Best Western Tattoo Ideas That Will Blow Your Mind 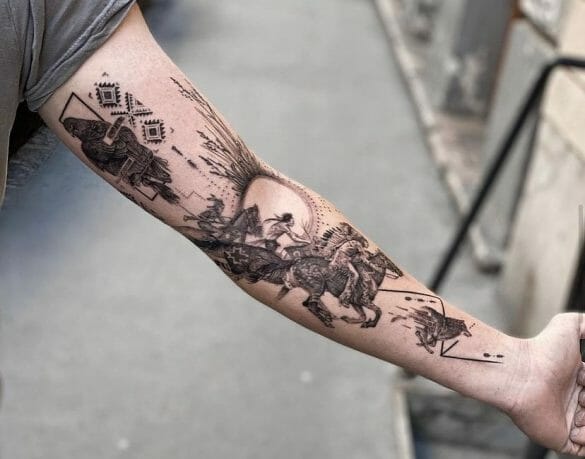 If you are looking for some cool western tattoo ideas, you are on the right page. We have the best tattoo designs for you!

The modern cowboy tattoos have brought back the beauty of the old western culture.

Western culture generally revolves around cowboys and their culture. Cowboys were men who lived in the wild, on ranches, and completed their daily chores while on horses.

The cowboys had their own style with their boots and hats, which are now referred to as cowboy hats and cowboy boots. Their style is very different from the mainstream and general fashion styles. They generally represent a longing for freedom, strength, and grit. They represent masculinity and a rebellious nature. Their ability to flaunt the many gears they carry is inspired.

If you want to showcase your pride in the American cowboy culture, then it is time to ‘giddy-up’ and choose the best tattoo for you! We have gathered a list of some of the best cowboy tattoos for you to choose from.

A cowboy is a very important figure in the history of the American culture. Getting a tattoo of a cowboy means you want to remember or pay a tribute to some important male figure of your life, like your father, brother, son, or grandfather. These tattoos don’t have to represent the real cowboys, they could be a representation of your love for cowboy movies like ‘The Good, The Bad, And The Ugly’. Such tattoos are generally elaborate and take more than one sitting to complete. Generally, these tattoos are made either on the chest, back, arms, or legs of the person.

This particular tattoo is made as a half-sleeve tattoo on the wearer. It is made with shades of black and white ink. It shows a cowboy holding its horse and walking towards sunset. The shadows under the tattoo make it look more realistic and unique. This tattoo is large and versatile. It is generally placed on body parts like the back, chest, thighs or the arm. This amazing tattoo could be an excellent choice for your next tattoo!

Cowboys used to spend months in the wilderness with the animals on their horses. They were seen as outlaws who wanted freedom. If you wish to get a cowboy tattoo, they could represent or also be a reminder of you working towards the freedom of your mind.

This is a very realistic tattoo of a cowboy riding a horse. The main style quotient of the cowboy, hat and boot is mentioned in the design. There is a skull near the leg of the horse making it look like the cowboy is in a dangerous land. The beautiful strokes and waves in this tattoo are definitely made by an expert tattoo artist. This beautiful design is made as a half sleeve tattoo on the upper arm of the person. Although this tattoo is made with black ink, the lighter shades of black make up the insides of the horse and other quotients of the design.

Texas is also known as the Lone Star State which is famous for its live music, BBQ, hot and humid temperatures, and the cowboys of course! Texas is known as the ‘Cowboy Capital’ all across the world. These cowboys are hard at work and it shows on the Panhandle and the Prairies in South Texas. The ranches of Texas are so popular that they are also mentioned in movies and advertisements. The beautiful state has the heart of the cowboys.

This sweet tattoo is a tribute to every cowboy of Texas. It appears to be a sketch-like tattoo made completely in black ink. This tattoo has various elements of cowboy designs. It shows a cowboy’s face with a cowboy hat, below that is the splitting image of The State Capitol in Austin. Beside the building is a cowboy holding a whip and riding a horse. This beautiful tattoo is made with shades of black and grey, however, some other colors can be added to this tattoo that will make it look like a beautiful painting.

There has been a lot of representation of cowboys in old west movies in Ameirca. They show the cowboys spending most of their lives in the Wild West. They have their own culture where they spend the days herding cattle, working on fields, taking care of animals, and spend the nights enjoying themselves drinking alcohol and playing cards in the casino.

This amazing tattoo shows the famous guns or pistol that cowboys used to carry, with dice and cards. The theme of this tattoo coincides with the theme of the movie, “Wild West’. This tattoo was made completely in black ink and shades of grey. There is a Wanted poster behind the gun in coincidence with the theme. This design is made as a sleeve tattoo on the leg of the person. This beautiful design can be a challenge for some, however, it is a fantastic design and great choice for your next tattoo.

‘Gunslinger’ is a term that is usually referred to the people in Old West America who are known for carrying a gun and being dangerous. These people often participate in shootouts and gunfights.

This beautiful design appears to be a desert because of the cactus and the barren land. Many different types of needlework have been used to make this design like dot work and fine line work. The colors used to make this piece are black and grey. There are some thick, bold lines of black that make the outline and some shades of grey that make the inside of the piece. The cowboy standing in the middle is holding a gun and he is made from dark black ink. This beautiful design has been placed on the right side of the chest of the wearer. This is a big and bold design and can be placed on any part of the body like the back, the thighs, the chest, or even the arms. Consider this piece of work for your next body art if you are a fan of Cowboys.

This tattoo is a beautiful piece by the tattoo artist, wrapped around as a sleeve on the arm of the wearer. It starts from the upper arm, where there are clouds and mountains, and goes to the lower arm where you can see 2 Cowboys on their horses. The detailing of this tattoo is just tremendous. It’s mostly made with fine line-work art. The colors that have been used in this tattoo are black, grey, and white. Such designs that have a lot of detailing take more than one sitting to complete. Compared to other Western tattoos, this tattoo is a large one. Because of its surface area, it can only be placed on other body parts like the chest or the back. This tattoo looks like a sketch. However, you can add colors to the design to make it look more appealing.

A skeleton cowboy tattoo is a unique design that not everybody finds very appealing. This tattoo is a symbol of bravado. They are a representation of somebody who is not afraid of going on their own path. These designs generally contain a skull of the skeleton wearing a cowboy hat.

This particular design has more elements to it. It shows a skeleton holding a gun, and riding a horse in The Dark Knight. The detailing on this tattoo makes it look very realistic. The colors used in this design are black and grey and white have been used to highlight some areas. The tattoo has been inked on the upper arm of the person. However, it is a big tattoo and can be placed on body parts like the chest, back, or thighs.

This tattoo is more of a neo-traditional tattoo because of its bold lines and bright colors. It shows a cowboy riding a horse in the barren lands. In the background, there is a bright red sun, and it’s surrounded by clouds. Hues of blue, black, brown, and Gray have been used to highlight the cowboy and horse. This is one of the best neo-traditional cowboy tattoos that you will find and can be a great choice for your next tattoo.

This particular tattoo depicts the scene of a Train Robbery. We can see there are three Cowboys holding a gun, one riding a horse, standing in front of a train trying to rob it. This tattoo looks like a sketch with shades of black, grey, and white. The design has been inked on the upper arm of the person like a half sleeve tattoo. This design is comparatively larger than the other tattoos and can be placed on other body parts like the chest, back, or thighs.

This is another design that shows a skeleton cowboy. The detailing of this design is tremendous. It has shades of black, grey and white. This design shows that Cowboys are brave creatures because even after suffering 2 arrows, the Cowboys still standing and holding a gun trying to kill their enemies. This is a beautiful design that is placed on the leg of the person. The correct placement of this tattoo art is anywhere on the body that has enough space to show the skeleton. A beautiful design that will be great for your next tattoo.

Western tattoos are generally bold designs that are not everybody’s choice. If you liked these designs, but are unsure of a permanent tattoo, you can request a temporary one instead. If it suits you, you can convert to a permanent tattoo instead.

Here are some other tattoo choices that you may like –

What is a western tattoo?

A western tattoo is a tattoo that is commonly seen in the Western world, especially in the United States. It typically includes images of cowboys, horses, and other Wild West-themed imagery.

What are the most popular western tattoo designs?

Some of the most popular western tattoo designs include images of cowboys, horses, cacti, and skulls. Other common themes include the American flag, eagles, and barbed wire.

Are western tattoos painful to get?

Like any other tattoo, western tattoos can be painful to get depending on the placement and size of the tattoo. However, many people find the pain to be manageable and even enjoy the process of getting a western tattoo.

How do I care for my western tattoo?

Once you have your western tattoo, it is important to take care of it properly to ensure that it heals correctly and looks its best. Be sure to follow your tattoo artist’s instructions for aftercare, which may include cleansing the area with a mild soap and water, applying an antibiotic ointment, and covering the tattoo with a bandage.