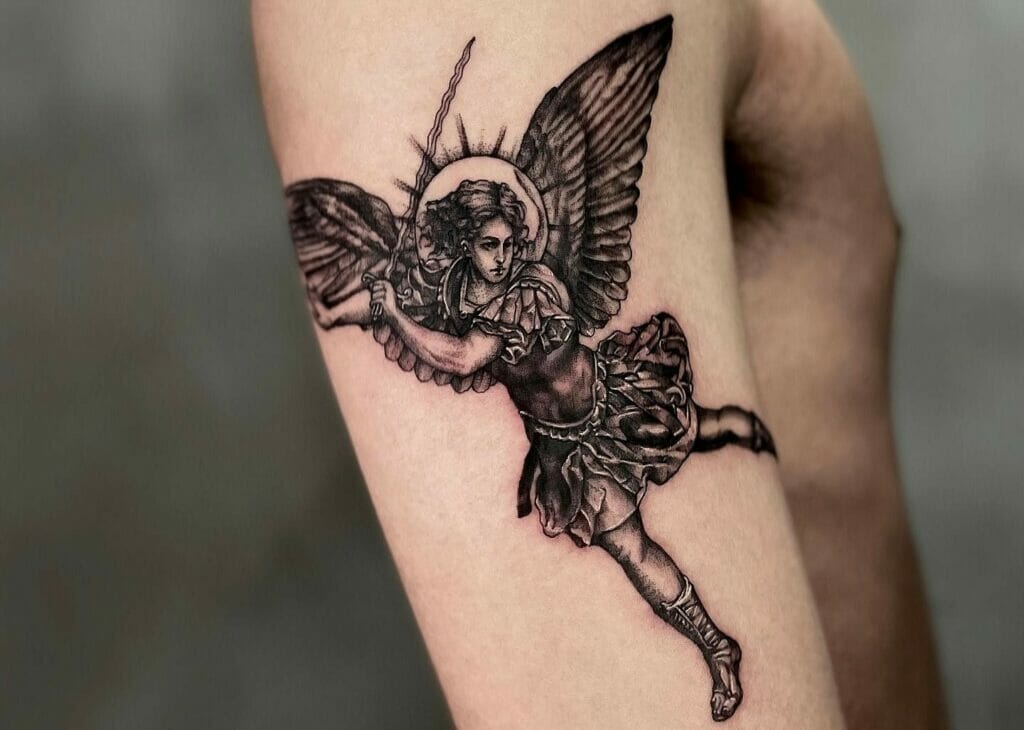 If you want to get a religious tattoo with a majestic outlook, then the warrior archangel Michael tattoo is one of the best ideas you can get.

The first mention of the archangel Michael can be traced back to the third century in the Book of Enoch.

Saint Michael the Archangel has been considered the chief of angels, and his duty was to protect the people of Israel. The name Michael can be found in Judaism, Christianity, and Islam.

In many religious texts, Micael has been referred to as the ‘great captain,’ and during the crusades, the Christian army believed that he would help them to win the war against the heathens. Even in Bible, it is mentioned that it was Michael who spoke to Moses on Mount Sinai.

The depiction of Michael in art is mostly as a warrior with a sword in combat, which also became a great tattoo idea in the tattoo industry.

Followers of Christianity, Judaism, and Islam often gets the archangel Michael done on their body. This tattoo is highly religious in nature and is done by people who have great faith in their religion. These Saint Michael tattoos mostly range from medium to large and are done accordingly on the body.

The medium ones are placed on the forearm, calves, belly, and shin, while the large ones are on the chest and back. A popular tattoo subject among men and women, these tattoos are mostly done using black ink. Here Saint Michael is not only portrayed as the leader of all other angels but of the human race and the tattooer in particular. The highest form of spirituality can be reflected in this design.

One of the best archangel tattoo designs is the warrior Michael with clouds. The first and foremost thing this tattoo represents is the presence of Michael in heaven. He singlehandedly battled with evil forces to keep them away from the gates of heaven. The tattooer believes in a similar fashion that Michael will help them to keep their evil spirits away from them.

The best place to put these tattoos is on the chest, back, thighs, forearm, and bicep. The clouds can be either done with light shading or with dark shading. The light shading demonstrates that Michael has already blessed the tattooer and they are leading a pleasant and cheerful life. But if done with dark shades, then it symbolizes that Michael is yet to help them or is helping them to battle against the evil forces.

Along with the image of Saint Michael, many people inscribe quotes from religious scriptures on their tattoo design while inking an angel tattoo. The scriptures mainly consist of the parts which have influenced them the most and the tattooer wants to reflect that through this design.

The best place to put these designs is on the wrist, forearm, back, neck, bicep, and ankle. Bible for Christians, Quran for Muslims, and The Talmud for Judaics are the most popular book choices from where the quotes are taken. These tattoos are mostly done using black ink and are both popular among men and women.

The protective archangel Michael tattoos are one of the most majestic pieces of artwork one can own in their body. Here the warrior archangel Michael is not only seen with a sword but also with a shield. This shield not only protects Michael from the blades of evil creatures but also the follower and worshipper of this brave angel.

The best place to put these tattoos is on the forearm, back, chest, shin, calves, and thigh. Mostly done in black ink, these tattoos are done by people who believe or have been saved from addiction, violence or abusive relationships by the faith they had in religious spirits. When done by followers of Christianity, the shield has often a cross sign wielded in the design.

An iconic tattoo art is the Michael tattoo with a raising sword done on the body. The raising sword depicts the warrior spirit of the angel and also portrays how he defeated Satan and his army with this vigor. The best place to put these tattoos is on the forearm, chest, back, bicep, and thigh.

The color of choice for these tattoos is generally black ink and they are both popular among men and women. The tattoo artist often includes an image of a demon being killed with the raising sword of Michael and with this, the tattooer wants to reflect that all their evils are warded off by the blessings of Michael and will bring them good luck. The tattoo also reflects the courageous nature of the tattooer with this angel tattoo.

The warrior archangel Michael is mostly done as large tattoos when done in the back. These designs look extremely beautiful and almost look like a story being told in verse. Often these designs are ornated with the cross, Jesus Christ, or Mary Magdalene, along with Michael fighting against Satan and his band of devils.

These tattoos take quite an amount of time and enough space, but the meaning it reflects is that of the warrior spirit of the tattooer, just like Michael and their protective nature. Black and white ink are used for etching these tattoos on the body and are most popular among men.

The St. Michael tattoo with a scepter has a Christian leaning particularly. The scepter is designed in the form of a cross representing the symbol of Christianity. The mention of Michael as a great angel can be found in the Old Testament and other Christian texts where he acts as the defender of the Church and assists people at the hour of death.

The main reason for Satan’s defeat was due to Michael, who guided all the angels against him and his evil creatures. The patron saint Michael is the key religious character and the symbol of courage, protection, and guidance. The tattooer who has great faith in the Christian religion and wants Michael to be by their side in their time of need often gets this tattoo. The best place to put them is on the back, chest, forearm, shin, calves, thigh, and bicep.

Only a few efficient tattoo artists can create a small Michael the archangel tattoo. The intrications are so minute that it is very hard to get the exact design done in this small art form. People who love clean and crisp designs in a tattoo mostly get this small tattoo done.

The best place to put this tattoo is on the wrist, ankle, neck, behind the ear, foot, and hand. Depending on the choice of the tattooer, it can be either done in black or in colorful ink. Protection, bravery, and guidance are the key symbols reflected by these Michael tattoos.

Many tattoo artists believe that the forearm is one of the best places to get any kind of tattoo design. Putting an archangel Michael in the forearm looks like God’s divine workings in a magnificent manner. With the archangel tattoo, the tattooer demonstrates their faith in the divine workings of God and believes that Michael is there to protect and guide them.

These mighty angel tattoos are often fused with beams of light at the back with a warrior sword depicting the battle against evil. They are mostly done using black ink and are both popular among men and women.

Many people get the saint Michael tattoos with a resting sword for a deeper meaning. These tattoos often range from medium to large and blossom beautifully in large spaces like the chest, back, legs, thigh, and sleeves. This saint Michael tattoo design is often seen with a guardian angel in a kneeling position with the sword pointing downwards. The angel has its wings spread and a beautiful halo over his head.

The tattoo reflects the meaning of the end of the conflict or the battle won. Similarly, the tattooer with this tattoo wants to demonstrate that they have won the battle against anything vicious that they were fighting. The tattoo looks extremely majestic and is mostly done using black and white ink. The tattoo can also represent peace and is known for its aesthetic value.

In many religious texts, it is mentioned that the name Michael means ‘one who is like God’, and this shows the significance of this tattoo design and why he was chosen as the leader of angels.

Other tattoo designs that can be done using Michael as a concept are given here.

What does the warrior archangel Michael tattoo mean?

The warrior archangel Michael is known as the leader of God’s army and the protector of humanity. The meaning behind his tattoo is one of strength, courage, and protection.

Where on the body should a warrior archangel Michael tattoo be placed?

The ideal placement for a warrior archangel Michael tattoo is on the upper back or shoulder area. This placement allows the tattoo to be easily seen and ensures that it will not be covered up by clothing.

How much does a warrior archangel Michael tattoo cost?

The cost of a warrior archangel Michael tattoo will vary depending on the size, complexity, and placement of the tattoo. Smaller tattoos may start at around $50, while larger, more detailed tattoos can cost upwards of $500.

How big should a warrior archangel Michael tattoo be?

The size of a warrior archangel Michael tattoo is typically dependent on the placement of the tattoo. For example, a small tattoo on the wrist may only be a few inches in diameter, while a larger tattoo on the back may span several feet.

What colors should a warrior archangel Michael tattoo be?

The colors used in a warrior archangel Michael tattoo are typically based on the meaning behind the tattoo. Common colors used include blue, which represents loyalty and courage, and red, which signifies strength and power. Other popular color choices for this type of tattoo include black, white, and gray.

What is the symbol for the warrior archangel Michael tattoo?

The symbol for the warrior archangel Michael tattoo is typically a sword or a shield. These symbols represent the strength and power of this archangel, as well as his ability to protect those who wear his tattoo.