10 Best Vulture Tattoo Ideas You Have To See To Believe! 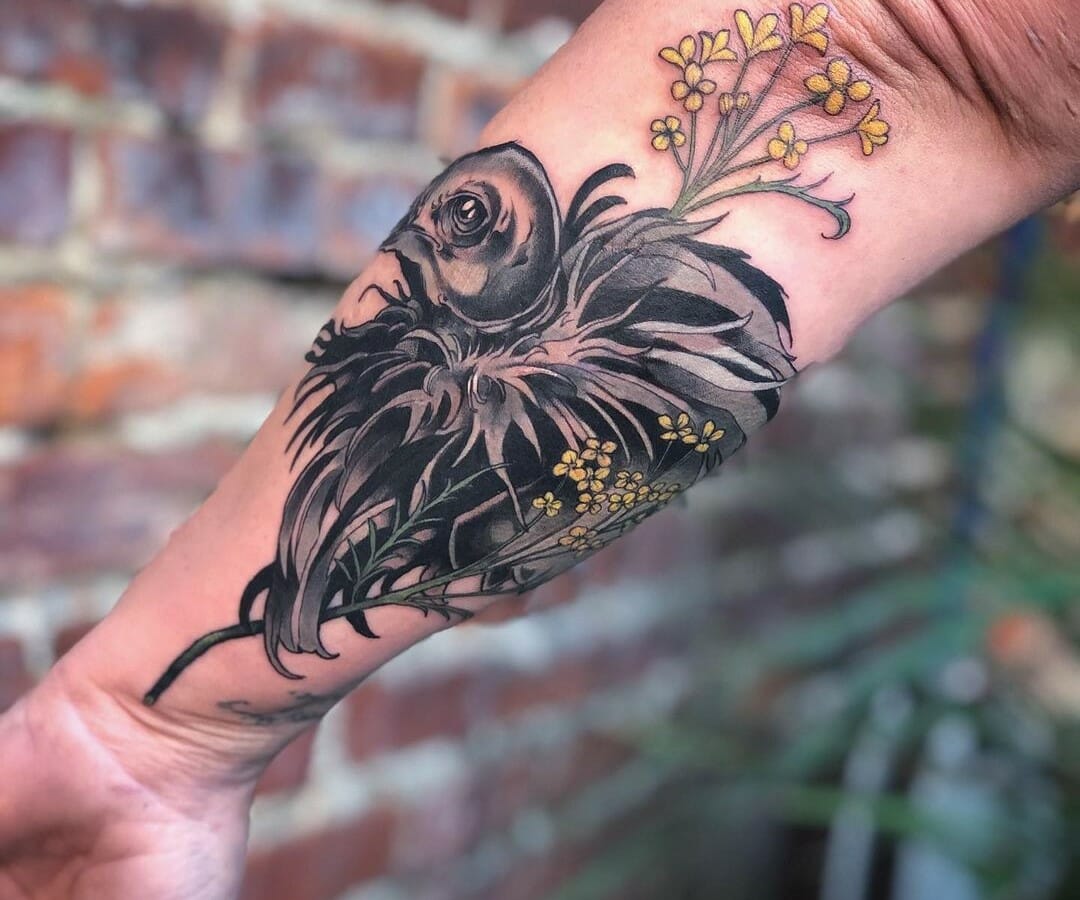 Does the bird; vulture intrigue you, so much so that you are considering getting its tattoo? Here are some inspirational ideas for you to choose from.

Vultures are scavenger birds that feed on carrion, meaning they eat the flesh of dead animals as a primary source of food; they don’t hunt but wait for the animal to die or an animal to finish eating.

For this unique food choice, vultures are considered a crucial link in the ecosystem chain, as they clear up dead carcasses within days, sometimes even hours. This prevents the spread of disease and bacteria, and even stench caused by dead bodies.

Vultures were worshipped in ancient Egypt as they were considered noble creatures, symbolizing motherhood and creation. People of ancient Egypt worshipped a goddess of motherhood called Mut, who is usually depicted wearing a headdress that shows a vulture in flight. They believed that she was the one who created the universe, that the universe is the creation of the goddess’s motherhood.

Here are some inspiration-worthy tattoos to help you get started on your vulture tattoo idea.

Vultures are known for feeding on carrion, i.e., dead and decaying bodies of animals. They do not prey on healthy, living beings generally. Vultures are not looked upon as pretty, beautiful birds either, as they have a bald head and a predatory countenance. Hence they are not considered as a tattoo option for many. Yet, some people opt to make vulture tattoos, as it is regarded as a symbol of rebellion and going against the status quo. This image depicts a vulture attacking a snake, and both the vulture has its beak opened in a screech while the snake bares its fangs. This vulture tattoo covers the entire expanse of the back and is an example of a traditional vulture tattoo in blackwork style.

Vultures are known for being scavengers. This tattoo depicts the innate nature of a vulture in its best form. This tattoo shows a black vulture that holds a skeleton in one claw and some bones in another. Vultures do eat the flesh and innards of a dead body, but only one species of vulture is known to eat the bones of carcasses, namely the mountain-dwelling bearded vulture. Hence, we could conclude from the vulture tattoo that it could be the species called mountain-dwelling bearded vulture tattoo. This vulture tattoo is inked on the upper abdomen part of the body of the person.

This tattoo idea shows a vulture being hit on the neck with an axe while some arrows are stuck in its wings and feathers. Still, the fiercely protective and predatory emotion can be seen clearly in the vulture’s eyes. The tattoo is inked heavily, with lots of shading in many places and magnificent strokes to give the tattoo the feel of a pencil sketch. The tattoo could symbolize a broken spirit or opposition against rebellion as it shows how the stroke of the axe can bring down a solid and noble creature like a vulture. This is a very creative tattoo and inked by a perfect artist. This vulture tattoo is made either on the lower leg or the upper arm of the person.

Vulture Tattoo With A Surrealist Twist

This is among one of the unique vulture tattoos which can be seen on the internet. This tattoo depicts a vulture that had a CCTV camera attached to its neck instead of ahead. The words’ birds aren’t real’ have been inked in a spooky font in one corner. This vulture tattoo could be inspired by the vulture’s ability to spot small animals and even insects from high above in the sky. Vultures have a fantastic sense of vision, and they very quickly can be considered in the top categories of animals with sharp sight. This ability enables them to find prey like dead mice, insects, and animals from great heights in the sky, from where they scan the area for prey. This is an example of a surrealist tattoo, where the image is an imagined concept or a fictitious character created out of things that have a real character.

Another vulture tattoo shows a black vulture with its wings spread carrying a human skull in its sharp claws. This tattoo is highlighted with various colours like pink and blue, with red in the background. As vultures eat dead bodies, they’re described as animals who eat death itself. In many cultures, vultures are known as the symbols for the cycle of life and death. Vultures are considered a significant part of nature, as, without them, giant animals would rot and decay for a long time and spread harmful bacteria and diseases. Thankfully, the digestive system of a vulture has adapted and is immune to such harmful bacteria and viruses, which makes them compelling species. Hence, most vulture tattoos in which the vultures hold skulls depict their power and role in being the symbol for the cycle of life and death.

This is an example of a traditional tattooing technique. The image shows the head of a vulture tattoo that has been inked across one side of the person’s head. The tattoo looks pretty unique and creative with a hint of rebellion, as very few people opt to get tattoos on their heads that are too directly on top of the skull as it could be excruciating to get a tattoo inked there. The person who receives a tattoo there has to be very careful against any infections caused by the tattoo wounds as it is a sensitive area. Apart from that, the tattoo has a very relaxed and badass aura about it, which gives a compelling vibe to its owner.

The image in the above link is a Japanese-style tattoo, which depicts a vulture. This vulture tattoo is coloured with black shading in the expanse of the wings, which are not open. The vulture seems to be stationary. The outlines of this tattoo are bold and thick, with light shading of blue and red in some places to highlight the wings and claws of the vulture. In the background, the bright red sun can be seen, which is a very famous symbol for Japan as well, as it can also be seen on a Japanese flag which appears as a big red circle on a plain white background. This symbol for the sun is significant as Japan is said to be the country where the sun rises first. The inspiration for Japanese vulture tattoos comes from the artistic style of ancient Japan. This vulture tattoo can be made anywhere on the body, for example, on the calf or forearm, even the waist.

This image shows a shoulder to collarbone tattoo, which covers most of the upper part of the chest. This tattoo depicts two vultures who are scavenging and eating the meat of an animal, which can be seen held in the claws and beaks of the vultures. The meat appears in stark contrast against the body as it has been inked with a bloody red colour. This is an example of a realistic vulture tattoo, wherein the vulture tattoo appears almost close to how the vultures look. The tattoo artist has done a fantastic job of tattooing the wings, which needs a lot of time and patience. The part of the body this person has chosen to make this tattoo also makes it unique and gives the tattoo a beautiful appearance as if the vulture tattoo is something the person can wear.

This tattoo depicts a vulture in a skeletal form with skeletal hollow eyes and a human skull at the base of the vulture tattoo. It seems as if the bearded vulture is decaying to dust, with mushrooms growing over it, indicating death and decay. This tattoo could be telling the meaning of a vulture, which stands for the symbol of the cycle of life and death in many customs. The vulture is also known for many vile things which it has to do for survival. It is said that vultures can vomit as a means of self-defence against their predators. But some scientists argue that they vomit to unload themselves of the weight of the food they have consumed to make a quick escape rather than using it as a method of self-defence. But whatever the reason, vomiting does its job well at throwing off the predatory animal from its course.

The above-linked image depicts many vulture tattoos, which cover all of the chests. The tattoo shows two vultures that create an illusion of being interlocked with each other. One of the vulture heads has a beak opened in a screech, while the other head looks a lot like a skeleton of the bird. These vultures share the same body, and their wings cover the expanse of the chest. This vulture tattoo is shaded in most places with black colour, leaving very few places uncoloured from dark shading. The tattoo artist has used very exceptional skills to make such an intricate tattoo. These vulture tattoos could be a symbol for vultures known for eating death itself, as they scavenge dead animals and help conserve nature and keep the ecosystem in balance. The vulture tattoo meaning could be inspired by a sense of dead worshipping too.

Just like the vulture, a raven or a crow is not considered as emblems or tattoos easily. But there is symbolism in getting these birds tattooed, too. Sadly humans don’t talk about the truth. The importance of crow in tattoos could mean transformation in some regions in Southeast Asia or wise spirit guides as noticed in America. The raven tattoo stands for protection, magic, and prophecy. It is also a totem that symbolizes war and death. Here is a different idea for more Vulture tattoos for you to look at

10 Best Vintage Tattoo Ideas You Have To...