10 Best Volcano Tattoo Ideas You Have To See To Believe! 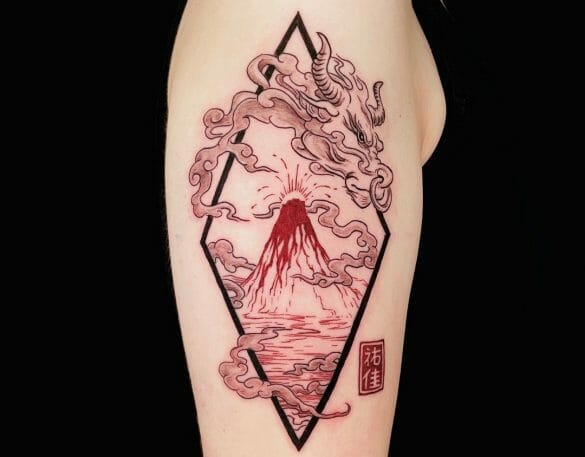 Are you looking for something fiery and vibrant but can′t find your perfect tattoo idea? Fret not, we have these volcano tattoo ideas that you can′t resist.

Volcano tattoos are connected with a high-energy, explosive personality.

A volcano tattoo is appropriate for men and women with a burning spirit and an explosive nature.

It represents the possibility of regeneration after devastation; volcanic soil is among the most productive on the planet. Plus the leftover ash clouds in the atmosphere provide breathtaking sunsets.

One might ask how volcanoes can be the source of life. We all understand that the power that originates from the core of volcanoes has generated countless islands and archipelagos. As a result, new territories have formed, which have later been “colonized” for wildlife and vegetation.

Another type of tattoo that volcano tattoos are also found in the Hawaiian culture. Volcanoes are a representation of the Hawaiian Goddess Pele, who is recognized as the goddess of fire and volcanoes and the originator of the Islands of Hawaii.

Likewise, volcano tattoos hold different meanings and links to different cultures, their elements, a part of the people′s lives. It is a classic tattoo set of ideas that also share different motifs for people to choose from. Together with their volcano tattoos, giving it an enhanced look.

So, going with the trend, we have curated a list of some of the most gorgeous volcano tattoo ideas. They range from bright and vibrant pieces to delicate and dainty-looking pieces.

Without any further ado, check out this cool volcano tattoo idea-collection and explore some quick

In the ancient world, people believed that volcanic eruptions were the result of “Gods′ rage”. However, we are well aware that volcanoes are anything but that. But the unnerving gushing of the hot obsidian and the sunless clouds of ashes justifies why people would believe in such things.

As daunting and destructive as they are; they are also life-givers. We are well aware that several volcanic eruptions have led to the origin of islands around the world. This change that hot magma brings to nature is both a statement of power and beauty. While people fear volcanoes, others find it fascinating enough to get their skin tattooed with volcano tattoos.

Here, the artist has created a stunning-looking sleeve that has all the vibrant colours blended into one beautiful skin art. The reds and oranges used in the tattoo give it an element of rage and fiery magma, gushing out. The blues and greys make for a stunning background and smoke emerging from the mouth. Together they make for a beautiful and realistic-looking volcano tattoo.

Another realistic-looking artwork, this beautiful piece is utterly gorgeous. Here, the artist created a freshly erupted volcano scene, with the red and orange colours of the dripping hot magma, giving the volcano tattoo a very realistic look.

The whole look covers quite a large portion of the tattoo and if you are someone who will never hesitate to commit to large size tattoos then we′d suggest you get this beautiful tattoo.

Of course, it might consume more amount of time than a regular tattoo however, we would advise you to get this tattooed if you have previously experienced getting tattoos that take a longer time. Because such an intricate tattoo design might look great, however, it will also take a longer time to cure. But, all that wait and patience will definitely be fruitful once healed.

The Vilyuchinsky Volcano is located in the Kamchatka Peninsula in Russia. It is said that the last sunset of the day falls on the top of the volcano and is a popular tourist place.

It is beautiful and scenic so of course, when it is turned into a tattoo design, its elements are further enhanced into a tattooed version. Quite possibly, with a lot of patience, the artist created a replica design of the volcano. The greys of the smoke and the mountain contrasts beautifully with the light blue of the water. Water bodies together with volcanoes can never go wrong seeing as they are highlighting the natural resources as well as serving to enhance the natural allure

Though it′s an average-sized tattoo, the tattooist managed to capture its scenic splendour in the tattoo.

Every little detail, including the smoke, adds to the aesthetics of the tattoo. The blurred and dotted work looks classic and manages to enhance nature′s look. The design is a unique piece, seeing as very few people would think of getting an actual volcano tattooed, making it a significant content or win when it comes to finding the perfect tattoo.

The mountain′s cone form and the lava squiggles create a fascinating geometrical feature. A tropical volcano tattoo might also include other picturesque features. The juxtaposition of palm trees and flowers next to an explosive volcano creates a captivating image. A cityscape form similar kind of elements.

There are many cities and towns based close to volcanoes around the world, most of them are in-active volcanoes, however, the thrill of having a volcano close by is quite spooky.

Here, the artist etched a blackwork style of art that includes a cityscape motif together with an active, smoky-looking volcano. Modern art design will definitely appeal to many today. It is also an ideal design to have if it is your first time getting a tattoo.

If you are interested in a design that has a sense of simplicity and yet is elegant enough to catch attention then we assure you that you will love this tattoo.

This simple and sweet design is truly every minimalist′s dream today. With thick and simple lines, the artist etched an active volcano, with the lava and smoke pouring out of it′s mouth. While it is a simple design, one might question why anyone would want to get a tattoo of a volcano. Well, a volcano tattoo meaning will surprise you, seeing as only a few will think of such a destructive activity as anything but that.

However, an active volcano might signify strength. It is also a representation of the change in nature that occurs after a volcanic eruption. Today, we might see a volcano as dangerous but in the tattoo community, a volcano holds a deeper meaning. This simple design is ideal for someone who is getting tattooed for the first time. It is sweet and meaningful and less time-consuming.

Time and time again we have been made aware of some of the active volcanoes on the Island of Hawaii. It is said that the Hawaiian people believe volcanoes are the representation of Goddess Pele who created the Island. She is known as the Goddess of rage and fire. One of the significant elements of Hawaii, and other than that palm trees are also a part of the island.

Together with a volcano and a few palm trees, the tattoo artist etched one of the cutest and the most aesthetic looking volcano tattoos. The simple details including the thin-lined smoke of, the orange sun, and the green palm trees make for a cute little design you just cannot resist.

The course of time needed to etch something that signifies power might need quite a significant amount of time, however, something as simple as this will definitely take lesser time and yet it will bag you many compliments.

Colourful Tattoo Of An Active Volcano

Volcanoes are powerful symbols of nature′s forces. Most volcanoes are inactive for the most part of the year. However, when they are active, they have the potential to alter the path of history.

Quite possibly one of the neatest looking tattoos we have come across so far. All details, all the lines and curves and colours used to create the tattoo has been neatly, meticulously and accurately placed. The artist gave the overall tattoo a cartoonish look. It depicts a scene of an active volcano spurting hot lava from it′s open.

There are smokes and replications of the flora and fauna included in the little scene, framed inside a box. It is ideal for those who prefer quirky looking tattoos and want to have a little bit of fun with their design. While other tattoos were more on the realistic side, this tattoo is more on the animated side.

This one is an epic piece, bringing together all the classic elements of nature. Air, Water, Fire and Earth. Another important significance of a volcano, in the world of tattoos. The dinosaur motif just serves to add to the gorgeous piece and enhances its natural look.

Together with the Plesiosaurus and the spurting lavas, this black and white piece makes for a stunning piece that can be placed on one′s back or even on one′s biceps. Basically, a spot that gives the artist the freedom to get creative is ideal for this tattoo.

Volcano tattoos are mostly just a volcano while some other details might include water bodies, a stream of hot lava, and the flora and fauna. However, the dinosaur adds a different twist to the tattoo. Specifically, if you are a dinosaur enthusiast who also happens to have an affinity for all things old and extinct.

Getting a tattoo of a volcano is representative of a kind of vigour and power that comes from inside. Everyone can think of somebody who exemplifies this sort of endurance, fortitude, and passion. Maybe you are the personification of it now. So, it only makes sense to get a tattoo of a volcano to represent those qualities in you.

Here, the artist used a simple Fineline style of art to create a small tattoo, featuring a volcano and a few mountains. The volcano has smoke coming out of its mouth, while the mountains are covered with small clouds. The entire piece provides an aesthetic look that you just cannot resist. We can assure you that it will definitely appeal to the minimalist in you, with its meaningful and simplistic nature.

Volcano Tattoo With An Island and The Sun

Islands and Volcanoes have always been associated with one another. One massive example includes the Islands of Hawaii. So, it makes sense to have a tattoo with the island and the sun as a motif. Here, the artist etched a minimalist tattoo artwork. The sun is created with little dots. In the middle, there are dotted lines that connect the motifs and the volcano with one another. The only coloured etching is the palms. Together they make for a sweet and alluring artwork, placed in the hip.

Volcanoes are by far the most conspicuous reminders of mother natures might. They exemplify the natural world’s allure as an offspring of risk, grandeur with a hint of destruction. A sleeping volcano tattoo represents a promise or a return to tranquillity after a violent age. This is also an excellent method to get all five elements into your body: earth (mountain), volcano (fire), air (clouds), and water underneath.

If you are looking for more erupting volcano tattoo designs, take a look at these.