101 Best Virgen De Guadalupe Tattoo Ideas You Have To See To Believe! 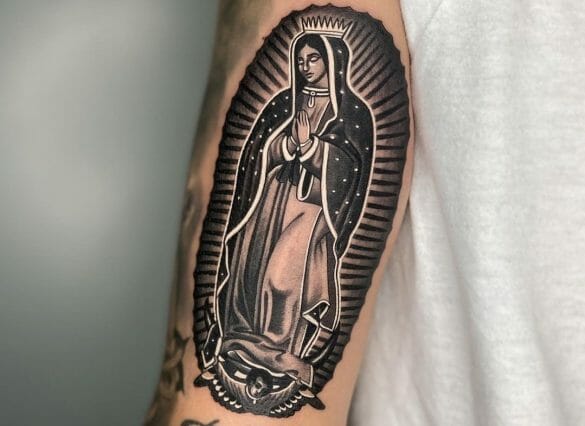 Are you looking forward to having an amazing and unique tattoo? Here we have 10 best la Virgen de Guadalupe tattoo ideas for the devotee in you.

If you are Mexican or Spanish, then you must have known the complete story of La Virgen de Guadalupe and why she is praised so much.

However, if you are not Spanish or Mexican, then you might not exactly know who this woman is. But you have seen her in many Catholic Churches, especially in the Basilica in Mexico City.

Well, if we are talking about this woman, then let’s discuss the local folklore. An indigenous Mexican peasant whose name was Juan Diego saw a young woman at the Tepeyac Hill. Speaking to Juan Diego, the lady identified herself as the Virgin Mary. She wanted to have a church erected in her honour at that site. Juan Diego conveyed this message to the Archbishop of Mexico City, named Fray Juan de Zumárraga. The archbishop asked for a miraculous sign as proof. Then, the lady filled Juan Diego’s cloak with Castilian roses, the flowers which are not native to Mexico. When Juan Diego opened up his cloak in front of the archbishop, the flowers fell and formed the picture of the Virgin Mary. Then, that lady is known as La Virgen De Guadalupe. She appeared four times in front of Juan Diego because he believed in her.

Now that we do know a bit about her, let us take a look at some of the tattoos based on this figure, who is quite popular in Latin America!

What can be so beautiful than having a tattoo of the traditional painting of La Virgen de Guadalupe? This is the same painting that is painted on the cloak present in the Basilica in Mexico City. Do you know that the Basilica is the most visited Catholic shrine site in the world? One should visit this place at least once in their life. This Virgin Mary tattoo is so beautifully tattooed on the person’s leg. This is an awesome idea to have a religious tattoo for all the Mexicans to show their theistic side. And look how impressive this is looking on the leg, with so much detail and precision. A simple and yet detailed black-inked tattoo to have on your body.

A religious lady tattoo for a beautiful back is what you want right now. The blessed lady to protect and bless you whenever you need her. How about a beautiful and cool Virgen de Guadalupe tattoo design to bless your back and life? In the Catholic accounts, it is mentioned that Virgin Mary appeared to Juan Diego four times and also once to the uncle of Juan Diego. When the lady asked Juan Diego to meet at the hill, but he couldn’t make it because his uncle was not well, she blessed the uncle of Juan Diego, and he got well in no time. The lady who blessed Juan Diego’s uncle will indeed bless you too. Go and get this amazing back tattoo based on an even more amazing subject and flaunt your summer body.

Isn’t it cool to have your entire arm covered with the tattoo of Virgen de Guadalupe? La Virgen de Guadalupe, which is Spanish for The Virgin of Guadalupe, is one of the most popular Catholic tattoos among the local people of Mexico and also in various places of Latin America. The indigenous people praised the Virgin Mary and respected her a lot. Having this tattoo for anyone is such a feeling of pride and satisfaction. This religious lady plays a significant role in Mexican history and the life of Mexicans. This tattoo on your arm will make it visible to everyone and inspire them to get one for themselves. Find yourself a talented tattoo artist who can give you this satisfactory feeling of having a Virgen de Guadalupe tattoo on your arm.

Do you like bodybuilding? Do you have big biceps? Are you looking for an awesome tattoo for your biceps to flaunt at your gym? Here it is. This Virgen de Guadalupe tattoo has everything you wish for. If you want to have a bold and yet religious tattoo, your search has come to an end. This is one of the best tattoos you can have on your body, especially your big pumped-up biceps. Bicep tattoos are always the best to show off your muscles. Flaunting your biceps with such a beautiful tattoo would be your dream. Go and fulfil this dream of yours. Find an artist who can add this much detail to your biceps to look more incredible than ever.

Everyone wants big tattoos so they can show them off to everyone. La Virgen de Guadalupe tattoo designs are made for those who wish to have huge tattoos on their body. But are you one of those who want a tattoo of the Virgin Mary but do not want to cover a significant portion of their skin in tattoo ink? Then this tiny tattoo of La Virgen de Guadalupe can be your perfect choice. This is one of the unique forms of Virgen de Guadalupe tattoos. It is so little with so few details and yet conveys the same honour and respect. The size of the tattoos doesn’t matter. What matters are the feelings and emotions. And this tattoo art explains this very well. This is a small and minimalist tattoo with a religious identity. This tattoo is not one to show off, but the one which can matter a lot to you—a tattoo that can bring positivity and good vibes in your life.

This is another La Virgen de Guadalupe tattoo for your arm and bicep. But this one is really quite different from the other tattoos. This one is not the full image of the Virgin Mary, but only her face and hands. This is not the same as the traditional image of the Virgin Mary that is also seen in parts of Latin America. Virgin Mary, also known as Our Lady in Catholicism, is shown here in a praying stance. This piece of art was probably leading the event when she asked Juan Diego to have a church erected in her honour. This tattoo can be an excellent choice for your arm or bicep to show off your theistic and religious side. Have the Holy Mother on your arm to always bless you and your life for a better version of you.

A full arm tattoo is always one of the most appreciated and loved types of tattoo. This tattoo of the Virgin Mary also contains Castilian roses. These flowers played a significant role as a sign to prove herself in front of the archbishop in Catholicism. When these flowers fell from Juan Diego’s cloak, this made the archbishop realize that he was right about the young lady. One of the exciting features of these flowers is that they are not native to Mexico. But, there’s another interesting fact about this story. When Juan Diego missed a meeting with Mary because of his uncle, she told him to gather flowers from the summit of Tepeyac Hill, and this incident took place in the winter of December when it was barren all around. This was such a miraculous act of her which she showed to Juan Diego. Having such a tattoo with such a beautiful story is like a dream come true.

An amazing full chest Virgen de Guadalupe tattoo for hardcore tattoo lovers. La Virgen de Guadalupe tattoos come under the tag of religious tattoos. But as you can see in this picture, how cool this tattoo art is looking. It’s all about how an artist moulds the religious features with such grace that it doesn’t look religious at all. This is one of the most extraordinary representations of the Virgin Mary painting. Through this kind of tattoo, all the Mexicans can maintain religiosity without compromising modern art forms. This tattoo shows that you can have bold and religious elements together in one single tattoo. Also, you need to have a lot of guts to have this full chest tattoo because it is a very long and painful process.

You might want a Virgen de Guadalupe tattoo with a few details. But you enjoy every element of the picture as well, like the Castilian flowers, waves, and all and want a tattoo that combines both. We think you are talking about this one. This tattoo art has all the traditional Virgen de Guadalupe image elements, but not in the realistic kind of picture. This tattoo is a kind of minimalist image of the Virgin Mary. This low detail tattoo may also cost you less as compared to the detailed and realistic one. This is such a fantastic and exciting form of a religious tattoo. You need a tremendous tattoo artist for yourself who can make this one for you.

This one has the traditional Catholicism look of the Virgen de Guadalupe image. The other tattoos look like an excellent imitation of the original image of the shrine. But this one looks like the original one has been imprinted on your skin. This might have some dull colours, but it seems like it has been hand-painted by the original artist who created the actual image of Our Lady. Plus, this tattoo is on the outer arm, where not everyone gets a tattoo. Typically people have interests in having tattoos on the inner arms. Having a tattoo on the outer arm is such a unique and amazing idea. Hurry and have this unique tattoo before your friends do.

How did the Virgen de Guadalupe become a popular tattoo?

What does the Virgen de Guadalupe tattoo mean?

The Virgen de Guadalupe tattoo is a meaningful symbol that represents faith, strength, courage and protection. It also serves as a sign of pride in Mexican heritage and culture. The colors used in the tattoo can also have special meanings – white stands for purity and innocence, blue symbolizes peace and serenity, red means passion, and gold stands for wealth and power. Furthermore, the Virgen de Guadalupe tattoos can also be used to represent a person’s faith in God, as it is believed that the Virgin Mary will protect and guide whoever wears it. Additionally, this tattoo can be a reminder of one’s cultural identity. Regardless of its individual meaning, the Virgen de Guadalupe tattoo is an enduring symbol of faith, strength and courage.

What are some of the best Virgen de Guadalupe tattoo designs?

How much will a Virgin of Guadalupe tattoo cost?

The cost of a Virgen de Guadalupe tattoo can vary depending on the size, location and complexity of the design. Generally, simple designs in black ink will be cheaper than more detailed or colorful tattoos. The cost may also depend on the experience of the tattoo artist, as well as any additional elements that are added to the design.