10 Best Viking Valkyrie Tattoo Designs That Will Blow Your Mind! 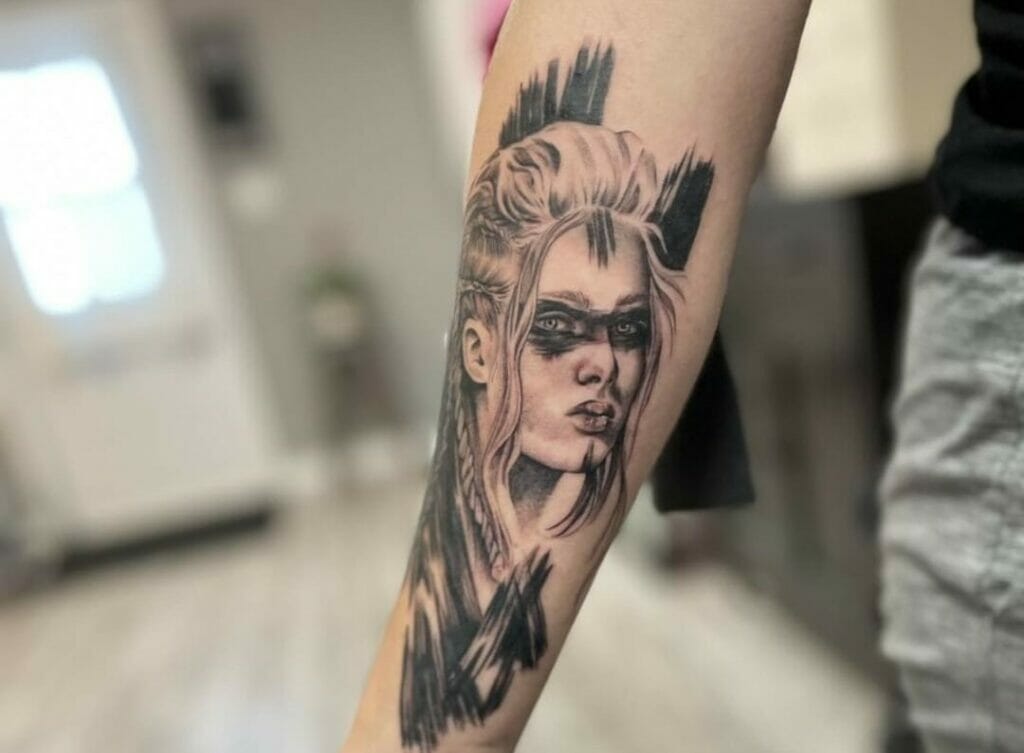 If you are a fan of the Norse Mythology, then you must know who the Valkyries are.

The Valkyries were a race of female warriors in the Norse mythology. And thus, they are also one of the most popular choices for people who want warrior tattoos.

There are many connotations to a Valkyrie tattoo. The Valkyrie were the gods of the battlefield who used to decide who lived and who died in a war. They used to soar above the ground of the battle and decide who to strike upon. They helped many heroes in wars and were considered to be warriors for the righteous side. Interestingly enough, all the Valkyrie were female, and thus, many women who have a very strong mentality love to get Valkyrie tattoos on their skin. The Valkyrie mythology is very inspirational and motivate people. You can get a Valkyrie tattoo to show off your warrior’s mentality. You can also get one to express how much you value integrity and honor in your life. The idea behind a Valkyrie tattoo can be quite simple. Some people get it to remember their ancestors and their culture. They are not only a source of beauty but also honor and people get inspiration from the symbols of the tattoo. If you have also always wanted a very cool Norse mythology-inspired Valkyrie tattoo, then you have come to the right place. We have a list of ten amazing Valkyrie tattoos right here.

Valkyrie tattoo designs are a very commonly seen feminism tattoo. They are one of the best warrior tattoos you can get and this one is a great example of why they are so famous. This tattoo is done in a neo-traditional style, which is famous for its bright colors and bold outlines. You can clearly see how beautiful the tattoo looks on the person’s skin. There are also many details that make the tattoo come to life. The Valkyrie in the tattoo has a spear and the winged helmet that is one of the signs of a true Valkyrie. The colors in the tattoo are bright and they compliment each other beautifully. If you are a fan of the neo-traditional tattoo form, then find a tattoo artist who is a master in this style and you can also have a tattoo as cool and badass as this one.

Badass Valkyrie Tattoos for the Ones with Warrior Mentality

Looking for a really badass tattoo that showcases your strength and sense of justice? Well this tattoo is the perfect choice for you. This Valkyrie tattoo is done in black and grey and looks absolutely stunning on the person’s arm. It shows the front face of a Valkyrie warrior with the winged helmet and the face symbols. There is also a little wolf face at the bottom of the tattoo that ties the whole piece of art together. The wolf is also a symbol loyalty and guardianship. The meaning of this tattoo is righteousness, and loyalty. This tattoo is an excellent choice for people who like black ink tattoos.

Realistic tattoos can be hard to get but once done, they look absolutely stunning. Just like the tattoo in the picture. The Valkyrie were winged warriors and were called the’ Chooser of the slain’, meaning they took the fallen soldiers to two different places. Half of them were taken to Folkvanger to goddess Freyja’s afterlife, and the rest were taken by the Valkyries to Valhalla, the hall of the Gods. The Norse people believed that the Valkyrie will guide their souls to Folkvanger or Valhalla if they fought with honor. This tattoo clearly shows how fierce the Valkyrie were. It has a very realistic feel to it which can be tough to replicate for many tattoo artists. So make sure you find one that is a pro at realistic tattoos.

For a lot of people, the forearm is one of the most common places to get a tattoo on. The part of the body is mostly always visible but also can be hidden away with a sleeve. Getting tattoos on forearms also hurts less than most other parts of the body. That is why, if you have always wanted a forearm tattoo, then you might want to consider this beautiful Valkyrie tattoo. True to the other usual Valkyrie tattoos, this one also has wings on her helmet. The images in the tattoo including the sun and the moon and the other details make it a truly beautiful tattoo to look at. The tattooing was also done very well. All in all, this is one of the best Valkyrie Viking tattoo ideas for you. You can also add a Viking tattoo to the other arm to make them look even better together.

All tattoo lovers have at some point, wanted to get a full sleeve tattoo on their arm. Some have already gotten it and some are still deciding on what to get. Well if you are a fan of the Norse mythology, then we might have a tattoo sleeve idea for you. The tattoo sleeve in the picture is very vibrant and colorful. The main image of the tattoo is obviously the face of a Valkyrie, which is done very well and the details look amazing. The classic winged helmet on her head adds to the imagery. There are also some other elements to the tattoo like the eye and the crow. You can also choose to add elements like the God Odin, who was very closely related to the Valkyries. This is one of the best Valkyrie tattoo ideas for people who want tattoo sleeves and love the Norse mythology.

Detailed and Technical Valkyrie Tattoos You Will Love

This tattoo is perfect for people who like very detailed and technical tattoos on their bodies. But you will have to browse through a lot of tattoo artists to find one who can perfectly capture this amount of detail. The artist took a highly detailed approach for this tattoo and it is very evident from all the intricate detailing on the armor of the Valkyrie warrior. This is an amazing tattoo design if you find someone who can pull of the intricate designs, but having a tattoo this beautiful on your skin will be the ultimate reward. This tattoo is perfect for both men and women. And though this tattoo is really large, you can also get a smaller, similarly detailed tattoo as well if you want.

As we have already explained, the Valkyries were a huge part of the Norse mythology, and have a big role to play in it. So it will make sense for people to get a tattoo that not only focuses on the image of the Valkyrie but also on some Norse symbols that are very important. You can find many tattoos regarding this design as this is one of the most common Valkyrie tattoo design out there. And this tattoo idea is perfect for people who like intricate Valkyrie tattoo designs with amazing Norse symbols. Instead of the helmet with wings, this tattoo features a head of a wolf on top of the woman’s head, but you can always get the winged helmet if you want. This tattoo is also perfect for men and women.

Valkyries were a breed of goddesses very closely related to the Norse goddess Freyja and the God Odin. They were seen in the battlefield and they led the souls of the soldiers who used to die with honor in the war to the afterlife. They were also connected to other Gods. This black and grey tattoo is done in a neo traditional style and one of the best tattoo ideas for people who like the art style but also want a black ink tattoo instead of a colorful one. You can also add other Gods and Goddesses in the tattoo design and make it a complete picture with vivid scenes and details. It will make a great tattoo sleeve.

The Norse mythology is full of amazing elements and one of them are the Valkyries. Valkyrie tattoo ideas are neverending and you can get them in any style you want. This is a very interesting Neo-traditional tattoo which carries all of the elements of neo-traditionalism. It has bright colors, bold lines and amazing details covering the whole forearm. This tatto is also a great Feminism tattoo as Valkyries are one of the best symbols of Women Empowerment. You can also get an American Traditional Valkyrie tattoo and it will also look amazing.

If you are someone that enjoys a higher degree of creepy imagery in your tattoos and also love the Norse mythology, then the last tattoo on our list is for you. This tattoo is done in black ink and has some amazing details. But the tattoo artist has chosen to give the Valkyrie in the tattoo a creepy look with all the details in the face and that gives it an extra level of creepiness which we love. The crow at the bottom adds to the imagery. The details on her armor is also amazing. You can ask your artist to draw you an even creepier design if that is something you want.

Did not find your perfect tattoo on our list? Don’t worry as we have some others up our sleeves that might cheer you up.