10 Best Viking Chest Tattoo Ideas That Will Blow Your Mind! 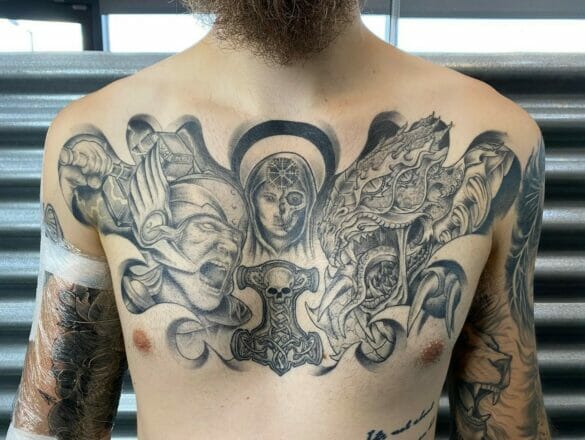 Is getting a Norse Viking chest tattoo your dream? Then here is an elaborate archive of the most demanded Viking tattoo designs for you.

Vikings have inspired the world with their history of bravery and dominance.

They were exceptionally fearless and could go to any length to quench their thirst for pirating, raiding, and colonizing. So no wonder they have inspired the later generations with their beliefs, symbols, and traditions.

While it is not so easy to understand the way Vikings lived their lives, it is certainly acceptable that they led their lives with pride. They embedded their beliefs into many symbols and tattooed them on their skin. These Viking symbols had a strong reflection of their unity and culture. Viking tattoos are often inspired by the mythical stories from Norse Mythology. Norse culture has a deep impact on these Viking tattoo ideas.

Viking tattoos symbolize perseverance, unity, bravery, and strength. The need to conserve and serve their families, worship their gods, and protect their culture and traditions are the origins of these tattoos. They would express these through body art. A mythology geek would know the value of these symbolic Viking tattoos.

So if you are one of them, you must find it thrilling to bear the symbolism of the past on your skin like historical creations. Having a Viking tattoo on your chest brings your power and strength. Here are a handful of exotic Viking chest tattoo designs for tattoo artists as well as tattoo lovers.

This is a broad and complicated Viking skull tattoo design on the chest. It is carefully done in black ink. The Viking symbols like the Valknut, a pair of the helm of awe symbols, two crisscrossing Viking axes, and some absurd patterns covering the broad chest make the tattoo look interesting and appealing.

All those Norse symbols make it obvious that the Viking tattoo symbolizes courage and vigor. The Viking warriors often sought their power from the Viking Compass and the animal skull would represent protection against their enemies during wars. The axe was the most used weapon for the warriors. This Norse tattoo design symbolizes “Victory or Valhalla” which means even if the Viking soldiers die in the battle, they will continue their journey of bravery to the Nordic heaven, known as Valhalla. Valhalla is one of the 12 realms of Asgard and it is where the souls of the deceased Viking warrior would settle after their glorious death. This tattoo brings the sense of winning against life’s struggles.

This is a spectacular tattoo design of the Viking god Odin on the chest. The tattoo follows the Realizm tradition of painting. Odin’s face is thoroughly detailed with this one hollow blind eye intimidating the onlooker. The thunder strikes flashing through Odin and his raven’s eyes reflect a deeper meaning behind this Norse tattoo.

The artist has done an exceptional job etching the most powerful Nordic god onto the skin. Viking gods were worshipped with mich devotion by the Vikings. Odin is one of the most worshipped Nordic gods with one blind eye and a horned helmet in Norse mythology. His image alluded to wisdom and knowledge. The one who bears the tattoo of Odin on the chest is a strong believer in the greater power of knowledge and seeks wisdom in every aspect of life.

The simple yet striking Web of Wyrd Viking symbol tattoo design on the chest brings an aesthetic sense to the onlooker. The zigzag interconnecting lines of this symbol are detailed with black dotwork. The tattoo stretches from the chest straight down to the stomach.

Web of Wyrd is not as much a celebrated Viking symbol as the others. But it certainly bears an effective depiction of their beliefs and morals. The intricate patterns of the Web of Wyrd symbolize the interrelation between past, present, and future. The wish to control time and fate promotes the demand for these Viking tattoos. Anyone who is a devoted follower of the Norse tradition can opt for these tattoo designs.

This Viking raven tattoo of Huginn and Muninn is one of the best Viking tattoos out there. This is a simple Viking tattoo elegantly rolling down from the shoulders to the chest area. The two birds are maintained with dotwork in black ink which gives them a gorgeous look.

This pair of mythical ravens are like pets to god Odin of Viking mythology. They swoop over Midgard and bring with them much information. They are the representation of thought and memory respectively. This Viking Raven chest tattoo design is popular among many tattoo lovers who appreciate the Norse gods and the Viking culture.

This next Viking tattoo design portrays the Valknut symbol from the Nordic tradition. It is completely based on dotwork with black ink. The shades of the three interlocking triangles vary from lighter to deeper as the dotwork gets more intense here and there. This is a small Viking tattoo that will be perfect for both men and women.

Valknut is one of the most wanted traditional Viking tattoos. It is famous for its symbolism. The inevitable transition from life’s glory to death’s finality is reflected through this body art. Many Viking warriors would draw this important symbol on their skin to accept this idea. If you are someone who enjoys life’s blessings and also accepts the fated death brings, this tattoo design may define your belief.

Yggdrasil or the Tree of Life is the most acclaimed Norse tattoo on this list. The green tree turns brown and sheds all the leaves, standing upright with its contrasting conditions.

Yggdrasil is one of the most important Viking symbols in Norse Mythology. The Old Norse words Yggr and Drasil together form this word, meaning quite literally “Odin’s horse”. This was a predominant Nordic artwork that influenced the Viking god Odin to hang himself on the tree just to gain all the knowledge of the world. It has a strong mythological reference to the Nine Realms. The Tree of Life looks mystical and provokes the tattoo bearer to have it proudly on their chest.

The Viking warrior tattoo is another common Norse tattoo design that is quite prevalent in the tattoo world. This is a tattoo of a female Viking warrior whose beauty is strikingly drawn by the tattoo artist with dexterity. Her face shows fierce determination and bravery.

This Viking-inspired tattoo design imitates the Celtic knotwork of the Triple Horns of Odin or the Triskelion. A small tattoo again, carefully tattooed by the tattoo artist. The tattoo has absurd patterns intricately woven into it. Men and women often opt for this tattoo design to get on their bodies.

These three horns bore the Mead of Poetry and Odin drank it as he aspired to gain the most wisdom in the whole universe. The Mead of Poetry was created from the Wisest man Ksavir’s blood. Greater ambition forced Odin to steal it. His trophy would make Him create the greatest poetry of all time. So any tattoo lover who looks up to Odin and His unquenchable thirst for knowledge would be fit for this Nordic knotwork tattoo design.

This Norse tattoo shows a Viking ship on the roaring sea and a Viking warrior. This tattoo is done skilfully on the back with black tattoo ink.

Longship tattoos bring the memories of Viking raiders who would go on battles fearlessly risking their lives. A Viking ship tattoo often signifies a new journey with a brave heart. A follower of Nordic tattoo would definitely want this Norse tattoo on their body.

Helm of Awe is one of the most demanded and respected Norse tattoos of all time. This Viking Culture tattoo looks exquisite on the chest along with the amazing patterns. The eight trident runes are drawn perfectly too.

Viking Compass tattoo has 8 runes suggestive of directions whereas this Viking rune tattoo design indicates a strong weapon that could paralyze the enemy. This Norse tattoo is often confused with the Viking compass tattoo. It is an Icelandic item that was achieved by Sigurd after he defeated the dragon Fafnir. This Nordic tattoo design gives the tattoo wearer the strength to surpass their fears. Also, it looks very stylish with a pattern all around it.

Vikings were fierce beings. They bore their pride on their skin as tattoos. Getting a Viking tattoo, either a Viking forearm tattoo or a Viking sleeve tattoo, is empowering. A meaningful Nordic tattoo like a Viking axe tattoo, Viking troll cross tattoo, or Norse Wolf tattoo is a very popular tattoo. These awaken a deep sense of pride and acceptance within us. The power of acknowledging our history, cultures, and traditions. Symbolic and traditional Viking tattoos are what bind people to their roots. Believing what the Vikings believed is a unique choice and you must adhere to it. Getting a Viking tattoo on the chest to proudly acknowledge yourself is never a bad decision.