10 Best Vampire Tattoo Ideas You Have To See To Believe! 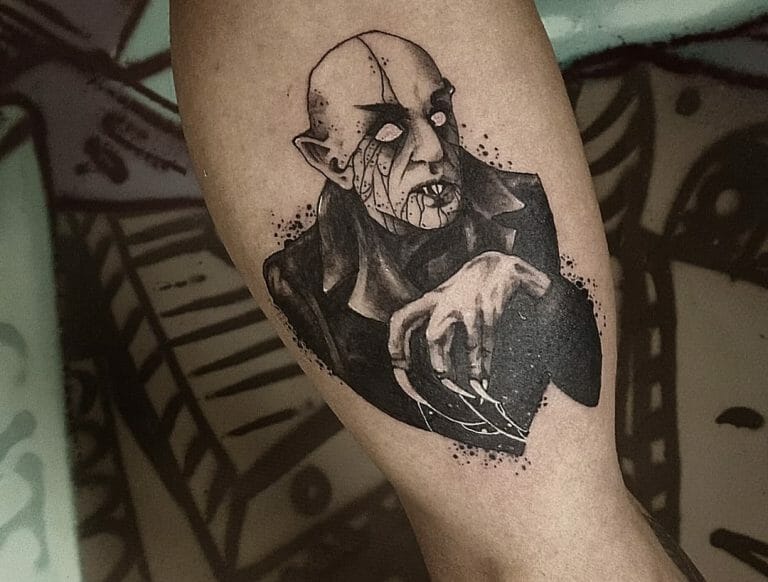 Want a vampire tattoo displaying your love for the evil creature? Search no more, ’cause we have got exactly what you are looking for!

Vampire tattoos are becoming quite trendy these days.

Vampires are ‘undead’ legendary creatures that originated in Eastern European folklore during the 17th and 18th centuries. These human-like creatures have some unique characteristics associated with them. For example, they are generally said to have pale skin, they can look anything from morbid to beautiful and they usually have blood dripping from the long vampire fangs they use to suck the blood of the humans they prey on. The legends surrounding vampires say that the humans killed by a vampire also turn into vampires as they are revived after death. Vampires can turn into bats or wolves and can hypnotise their victims. Vampires cannot cast a shadow which means they cannot be seen in mirrors, captured in photos or recorded. The tales say that a vampire sleeps in its coffin during the daytime and goes out to seek victims at night. Even though they are capable of being healed faster than humans, there are many ways to kill a vampire. Things like fire, sunlight, a stake through their heart and decapitation can kill a vampire. In medieval Europe people who lacked scientific education believed that the widespread infectious diseases were caused by vampires. Which led to dead people being suspected of being vampires and corpses being dug out from their graves to put an end to the ‘vampirism’. In 1897, Bram Stoker’s novel ‘Dracula’ made vampire legends more popular. Even though vampires are just a part of a myth, in today’s world, people still claim to be vampires. Modern ‘vampires’ usually drink small amounts of blood from willing donors in order to keep themselves healthy. And if not blood, they claim to feed on other people’s energy to keep going. A vampire tattoo can be a symbol of dreams, fantasy, death, eternal longevity, change, strength, resurrection, seduction, love, sex and many other things. Getting a vampire tattoo, be it for any reason, can upgrade one’s entire look in a terrifying way. Vampire tattoos come in different shapes, sizes and colours. If you are into vampire tattoos and want one for yourself, we have got you covered with some amazing vampire tattoo designs you might wanna consider getting inked:

This black and grey vampire tattoo features a gothic female vampire with the wings of a bat. This is a beautiful yet terrifying chest tattoo anyone into dark stuff would not be able to resist getting inked on their body. The woman in this female vampire tattoo has bloody fangs and an empty eye that looks absolutely frightening as well as gorgeous. This tattoo symbolises love and transformation in a beautiful manner. It would be a great choice if you are looking for a back tattoo as well. But the detailing of this tattoo is extremely minute and so it demands a good set of hands of an artist who is skilled.

Traditional tattoos are those with distinct linework and a limited number of colours used in them. This traditional tattoo showcases a seductive woman with bloody fangs and lust in her eyes. This one would suit people who are into or are classy women who can be lecherous at times. This specific tattoo has other meanings too. For example, it represents the fact that things of beauty are not always pleasant. And attractive humans or creatures like this female vampire can cost you something as precious as your life too. The usage of the colours mauve and yellow adds up to the aesthetics of the black lines and shading. With the help of a good artist, anyone can totally rock this vampire tattoo.

Neo-traditional tattoos are the ones that have illustrative bold lines, colours with high saturation and give off an effect of dimension without being 3D. And this beautiful vampire tattoo fits that description like a key fits into its lock. This tattoo has symbolism that is the exact opposite of the last tattoo. This one portrays a female vampire with a split head and a rose coming out of the crack. What this particular vampire tattoo wants to say is that, not everything that appears startling is actually fearsome and that there’s good in everyone who apparently seems evil or bad. And if you agree, go for this one.

In spite of being majestic, this vampire tattoo is pretty unsettling in nature. It seems like we can hear the screaming vampire just by looking at this piece of art. We can spot five colours ( black, red, yellow, orange, and purple) being dominant in this tattoo. The emptiness in her eyes and the blood on her teeth make the image very ghastly. And the horns and the septum ring make this artwork sicker. This one would look good on any body part, be it the arm or the calf. With some money and some patience, you’ll be all set to get this one tattooed.

It is a crime not to talk about Count Orlok (based on Bram Stoker’s character, Count Dracula) from Nosferatu when we talk about vampire tattoos or even vampires. Nosferatu, adapted from the 1897 Novel ‘Dracula’, was the first-ever vampire movie to be filmed. Nosferatu not only made vampires more popular but also added a new characteristic to the beasts. It was the first published work that said sunlight kills vampires. This vampire tattoo features Orlok in a very unnerving way. This piece of art looks too realistic to be two dimensional. And thus, you must start looking for tattoo studios with the best artists and reasonable charges in your area and get on it already.

Looking for a vampire tattoo to flaunt your love for gothic stuff as well as your queerness? We have got the perfect tattoo for you. If you support the LGBTQ+ community, you can get this one tattooed, irrespective of your gender, age or skin complexion. You can get this tattoo inked anywhere from your ankle to your wrist. And the best part is that this tattoo design is so simple that it would not cause you much pain or burn a hole in your pocket. So stop waiting and get this piece of art inscribed on your skin as soon as you can.

As the legend says, vampires have the ability to transform into bats, probably because some bats consume blood to survive. And it is said that bats are deeply connected to death and the underworld. Because of their nature of being nocturnal, bats are called the ‘Night’s Guadian’. And the bat in this vampire tattoo adds up to the spookiness of the artwork really well. This tattoo is pretty intricate in nature and has quite a lot of techniques used to be inked. You can get this on your thigh, chest or back, but it might be painful. But we can also assure you that the pain will be worth it.

Pulling off a full-back tattoo can be difficult, but with this design, one would look absolutely cool. This tattoo features a vampire who is apparently a semi-naked woman standing in a seductive way. Also, there are floral patterns, a face split into two halves and a spider web incorporated into this vampire tattoo. This tattoo beautifully symbolises power, sex and love. This piece of art might look simple because of the bold lines, but we are sure that you would still need an artist who knows how to do their job well anyway. And if you already know someone trustworthy, stop wasting your time and go get this inked.

Garlic is supposed to be harmful to vampires. But do you ever wonder what would happen if the vampire withstands the garlic and sucks on its fluids? It would probably turn into a Garlic Vampire, right? And we believe, this is exactly what a Garlic Vampire would look like. But is this creature supposed to look scary? Because it is clearly more cute than scary. It’s a funny tattoo one could get for Halloween or any other occasion for that matter. In fact, one doesn’t even need an occasion to get this one tattooed. So if your interest in cute goth stuff is real, you would not regret getting this tattoo inked on your body.

Do you want a vampire-themed bat tattoo, but have run out of space on your skin to get one? This is exactly what you should get. The fangs and the unsettling emptiness in its eyes make the tattoo pretty gruesome. This vampire tattoo is a symbol of death, darkness and facing one’s inner demons. Thus, it would be a great idea to get this one inked if you are into dark stuff. With some planning before the tattooing, some attention from your artist during the inking and some care from your end during the healing process, this tattoo is gonna look dope on your hand.

We believe you have wrapped your head around the fact that there is quite a variety of vampire tattoos you can choose from. You can even get one personalised by your artist for yourself. Vampire tattoos can have anything from the famous Dracula to a vampire character from some popular movie or series and many other elements incorporated into them. We hope you have been helped to make up your mind about the tattoo you want by going through the list of vampire tattoos we put together for you. And if that is not the case, and your confusion still persists, here are some more ideas for vampire tattoos you will find on the internet: