10 Best Vampire Bite Tattoos That Will Blow Your Mind! 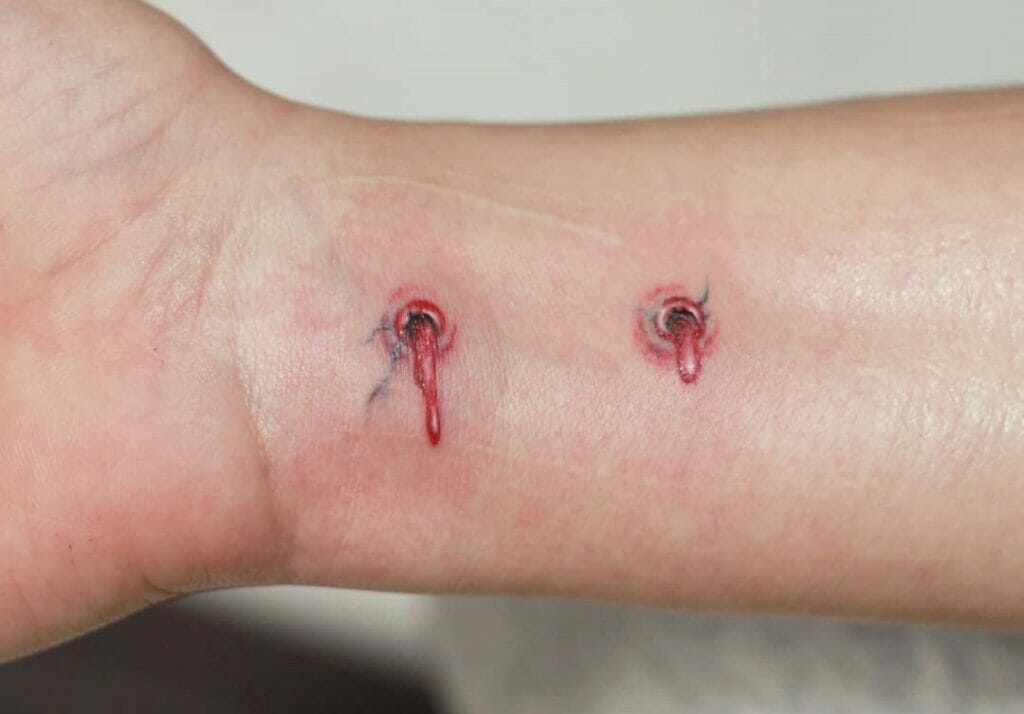 Are you obsessed with web series related to vampires? Do you want to get vampire-bite tattoos? Have a look at this vampire bite tattoo article to discover some new ideas.

Vampire bite tattoos may appeal to those with a dark or Gothic inclination. Vampires are beings of horror folklore, but they nonetheless pique our interest and excitement.

Though vampire bite tattoos are an acquired taste for many, it seems that the people are just hungry to pour their blood for the love of vampires as the voracious undead are to feed from them. People who want to get the artificial bite marks of a vampire constitute a startlingly varied cross-section of the world’s population. If you are also a fan of vampire bites, then check out these tattoos for inspiration.

Dark and gothic pop culture motifs like vampires, the undead, and vampire bite tattoos dominate the world of body art. Tattoo artists are scrambling to meet the rising demand for vampire-themed body art. This vampire tattoo would look great on someone who wants to have a petrifying theme. This tattoo is perfect for you if you want to carry a permanent mark of the night-dwellers on your neck.

Vampire tattoos portray a lot of things. This vampire tattoo perfectly delivers the intended message. It is also important to have an idea that the direct message is only for the wearer or everyone. The direct message can reveal the connection of the wearer to dark energies and interest in the occult or as emblems of evil and terror. The vampire bite marks are an enchanting beauty to have on your body.

Vampires have been present in human mythology for centuries, even though the term “vampire” was not popular until 1734. Over time, they have changed their nature from fearsome ghosts to romantic creatures like Lestat and Dracula. True Blood, Twilight, and The Vampire Diaries are some of the few examples of vampire literature that has been modernized. Movies have also been reimagined, with classics like Count Dracula and Nosferatu that were given new life on the big screen.

Vampire aficionados and those who have a soft corner in their hearts for the macabre will undoubtedly like and appreciate this. The vampire tattoo symbol is a worldwide monster with different identities and ideas that best fit them. The vampire is sometimes regarded as being the most charismatic creature, with great power of repulsion and attraction.

The sensation of ecstasy is typically portrayed as being induced by either the vampire’s psychic skills or a substance communicated through the bite. A vampire bite tattoo feels like an eternal kiss. Even though Vampires are just a myth, they are very popular. And even if you don’t like them, you have to admit they’re pretty cool.

Vampire tattoos appear in a variety of styles, each featuring a distinct figure, element, or symbol. This realistic vampire bite tattoo will look great on a lady’s neck. The vampire tattoo’s meaning depends on how they are used with symbols such as power, rebirth, love, longevity, death, sex, dreams, transformation, eternal, and much more.

The undead emerges from their coffins or graves at night to consume the blood of the living. Biting the neck with sharp, long, pointed canine teeth has become as fashionable as zombies snacking on brains. The drop of blood gives a real look at the bite marks.

Vampire bites on the neck are always seductive; it’s as if you’ve left with something like an eternal kiss of death. The neck is a visible feature of the body. So if you want to get a vampire bite tattoo, think twice because it will remain exposed for the rest of your life. The neck, in particular, is frequently connected with communication.

So, for some individuals, neck tattoos represent being open to meeting new people and situations and may even indicate that the person enjoys taking chances. But vampire bite marks indicate evil and terror. Those with neck tattoos seem courageous, powerful, and smart.

Vampire bite tattoos could appeal to those with a darkish or Pointed arches spirit. The design of a vampire bite tattoo typically has blood drops and is rather realistic. Additionally, the shoulders or neck are the standard locations for these tattoos. A vampire bite art piece looks fantastic, with some colouring and bruising for a more realistic appearance! This piece might make a lot of comments fly your way.

It’s important to realize that each vampire bite scar meaning denotes a definite purpose, so pick the one that best captures your true intent. This realistic ink of a vampire bite illustrates how rapidly the vampire spirit spreads throughout your body after infection.

Bella Thorne is famous for the “Bite Me” body art ascent to fame. The idea of getting a tattoo is to express that, despite being different from how society perceives you, you are still not free to move about as you choose. This tattoo is for you if you desire a simple, minimalistic design that makes its statement clear and concise. People choose to get these tattoos in red ink over standard black ink.

Tattoos that read “Bite Me” have been linked to vampires and are meant to signify individuality because vampires do not integrate into the normal culture. The lips, butt, neck, and chest are all perfect locations for this tattoo.

A vampire bite tattoo is ideal for showing off your passion for evil. One intriguing subject of discussion has been the legend surrounding the well-known vampire. The story has a lot in common with the well-known Dracula, who introduced the idea of a vampire to the public and was equally renowned by Twilight. The aesthetic of vampire bite vector illustrations is striking but fascinating, having a powerful visual effect that is both beautiful and frightful.

The finest representation of a vampire’s bite is in this variant. The fangs are like those of a vampire, spilling blood from the victim onto the neck, giving it an infectious appearance that can be frightful. The fact that vampires are nocturnal creatures does not imply that the colour of a vampire tattoo must be used exclusively. If you desire a vibrant vampire bite tattoo, you may make it fit your style.

Traditional Vampire Bite tattoos with a bleeding look are popular tattoos at Halloween parties. Some vampires prefer an immortal kiss on the arm or wrist rather than the neck or shoulder. Because vampires are active at night, the colour of the tattoo doesn’t have to be the only choice. A vivid vampire bite tattoo may be modified to meet your style if you so want.

You should carefully consider your selections and ensure the design you’ve picked is something you want before deciding whether or not to be tattooed. It is more noticeable when it is fastened to the arm or wrist, and relying on the connotation you assign to it, it may appear beautiful or frightening.

If you’re a serious tattoo aficionado or are just planning to get your first one, you’ve probably been thinking about where you’d want to be inked. Many people choose to use their arms, backs, legs, or any other available area. However, unless it’s the only available site, many people don’t think of their collarbone or clavicle as an appropriate location for their tattoo. Some people find wearing vampire-bite tattoos to be incredibly appealing.

This vampire bite piece of artwork on the collarbone wonderfully depicts the typically small amount of blood that comes with vampire bites. A distinctive option for anyone who doesn’t want massive, obnoxious vampire bite tattoo ideas. Due to its high exposure, it’s an uncommon choice, yet many attractive collarbone tattoo patterns and designs are available for both tattoo experts and newcomers.

If you are just researching the ideas of vampire bite tattoos, remember that these teeth marks will stay forever. It will also help you to think about the location you want to get inked with bite marks. The neck is ideal for getting vampire bite tattoos, but your grandma and some people may beg you to differ. You can also go for a wrist or a thigh tattoo, as they are also popular places from where vampires drink blood. Some people may get terrified by deep vampire bites. But for others, these deep puncture wounds are a portal to a terrible and mysterious world. Below are some ideas for more tattoos from which you can draw your next inking inspiration.