10 Best Valhalla Tattoo Ideas You Have To See To Believe! 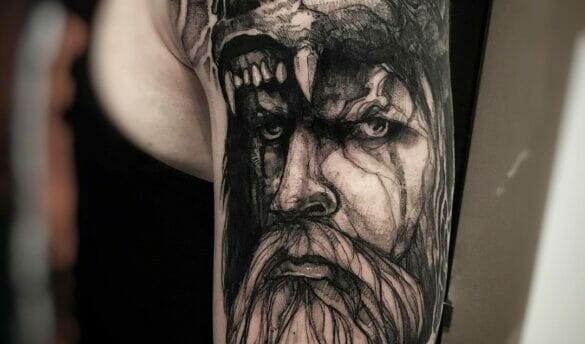 Looking for a tattoo to honour your Norse genes? Check out this list of Valhalla tattoo designs curated specially for you!

There is something truly mystical about Norse mythology and symbols that is sure to grab attention!

Norse mythology-inspired body art is always bold in appearance. The symbols can be interpreted in several ways.

“Valhalla” according to Norse mythology is similar to the concept of heaven in Christianity but not quite! It is more commonly referred to as the sign of the “hall for the fallen warriors” of the Viking clans. So basically it is a special place of honour in the afterlife of Nordic warriors where they are rewarded for their courage and bravery.

An interesting fact for people who love tattoos is that it is said that the Vikings themselves would be covered in body art from head to toe and considered these new tattoos to be sacred since they depicted symbols from Norse mythology.

It is important to note that the Norse symbols mentioned in mythology have deep historical and philosophical meanings. Therefore make sure to choose the Valhalla themed tattoo you want carefully before you decide to visit the tattoo shop to get inked!

What we can assure you is that the design is sure to grab eyeballs and speak volumes about your Norse lineage, where ever you go!

This is a beautiful and powerful tattoo that is sure to grab attention and lead to captivating conversations. The tattoo can technically be made on any part of the body but will look super smart on the chest area. According to Norse mythology, a valkyrie is one of Odin’s twelve handmaids who carry the slain warriors and fly with them to Valhalla where they can rest in eternal bliss. The Valkyrie in this tattoo is shown to be a powerful warrior princess watching over the gates of Valhalla. The piercing gaze is guarding the treasure and artefacts hidden inside heaven and protecting it to be enjoyed solely by the noble warriors. The tattoo is gender fluid and that is the best part about it! Walk into the tattoo shop and note that you ask for an experienced tattoo artist to create this look for you!

This tattoo is well suited for all body parts but will look particularly stunning on the chest area or even the arms. This black and white tattoo features a norse warrior skull in Valhalla. The skull is crowned by the head of a dead bull and adds some extra masculinity to the over-all look of the design! This tattoo is a sign of glory even in death.

This bold design can be made on any body part including the leg, arms and chest but is particularly well suited for the arms and legs as shown in the image. The design features the text “Valhalla” along with other norse symbols decorating the sides of the gates to Valhalla. The design also features a Norse warrior finding his way to Valhalla where a treasure awaits him in the afterlife. The shading on this design is intense and will require an artist who is skilled at the art from a reputable shop.

This is one of those new tattoos you must get if you are looking get your back inked. It is always a good idea to have a complete scene tattooed on your back. This is one of those designs that is no less than a movie poster. The Valkyries keeping guard at the gates of Valhalla on both sides look dramatic and beautiful at the same time. There are more tattoos of the warriors walking into the hall of the fallen to which they now have access. The warriors already within the hall can be seen waiting to accept the new recruits! This a perfect choice for those who are a fan of the famous viking video games.

This is one of those tattoos that is perfect for strong women looking for more tattoos to get inked. It is also more uncommon than other Valhalla-themed tattoos since it has a vibrant colour palette. A Valkyrie is a female guard of Valhalla who escorts fallen heroes to the great hall of fame. This is a perfect choice for women who are fans of the famous vikings video games.

Odin is the king of Gods according to Norse mythology who decides who he may accept as a fallen hero and be granted access to Valhalla. This beautiful artistic bodyart is one of those tattoos that is a perfect blend of boldness and power. The artistic work on Odin’s face is truly remarkable and something to admire. The gates of Valhalla open up right above Odin’s face symbolising his power and command over the Norse people. This beauty can only be successfully recreated by an experienced tattoo artist from a reputable shop.

This is a great tattoo inspiration for those looking for Valhalla themed sleeve tattoos. The shading, especially on the long locks of Odin’s hair who is the king of Valhalla , is the work of a true genius. There is something about Odin’s eyes in this piece that gives it an other worldly appearance.

This is one of those beautiful tattoos to add on to your collection of body art inspired by norse mythology to honour your genes and warrior like spirit. The tattoo depicts Odin, the King of Valhalla in a state of shocking rage as a viking ship navigates itself through the rough seas during the course of a storm, seated atop Odin’s head. Make sure to visit a reputable shop to get this one inked!

This is another one of those Valhalla tattoos that you must add to your collection if you are a fan of Odin. He is shown here in his true celestial form with a halo of sacred norse symbols around his head. The angelic feathers attached to both sides of his face gives this work of art a truly celestial look. The soft curls on Odin’s hair and long flowing beard add a delicate touch to this otherwise masculine work of body art. You may find other celestial themed ones during the course of looking for other Valhalla body art at the shop.

This is one of the ultimate Valhalla tattoos that you must add to your collection if you are keen on it! The masked look on Odin as he presides over the great hall of fame at Valhalla is full of suspense as well as glory and power. The dark theme of this tattoo give it a bold look that is not for the faint hearted. During the course of recreating this tattoo keep in mind that patience is of utmost important for both yourself and the artist working on it! Make sure to visit a famous shop to ask for this to be inked in yourself.

If you are still looking for more tattoos that satisfy your desire to know more about norse mythology, check out the list of ideas below!