101 Best Upper Arm Tattoo Ideas You Have to See to Believe! 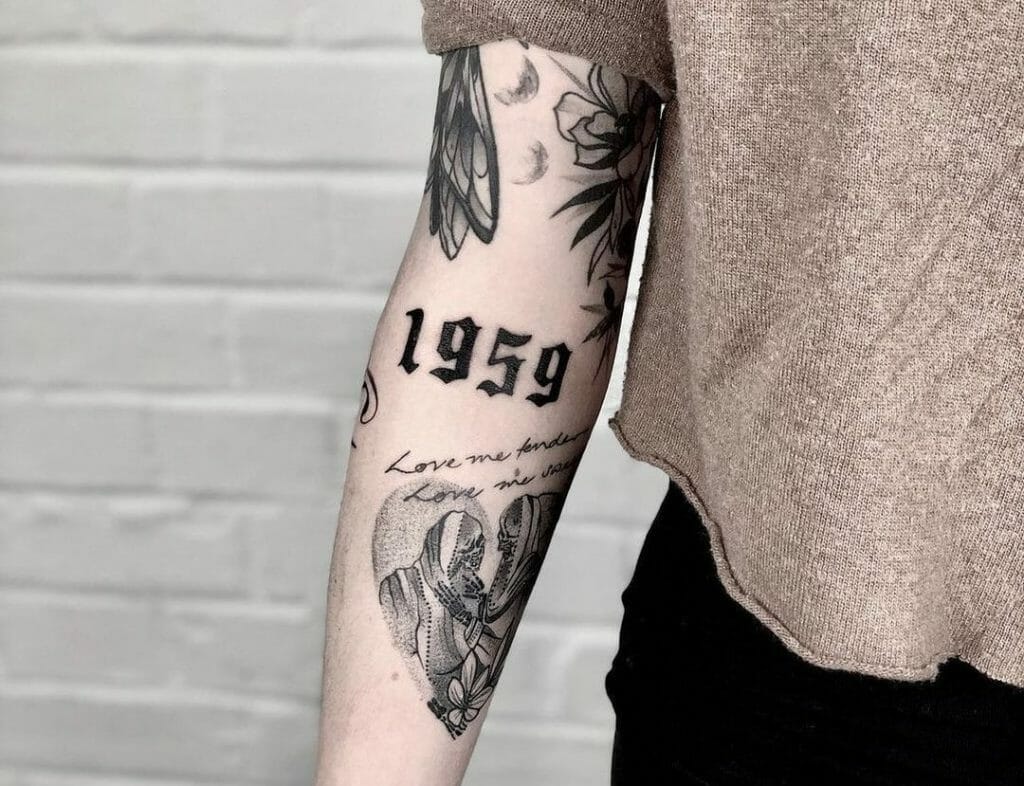 Tattoos have come a long way since their inception and have been evolving throughout the years.

Tattoo designs have taken small and big shapes and have been tweaked to fit any part of the body. Arm tattoo designs are one such idea that has gained popularity over the years.

Arms are one part of the body that are always on show and hence, have become a great place to get yourself inked! Arm tattoo designs have grown over the years with the creation of various designs, styles, patterns, and elements that have been incorporated into the industry. Upper arm tattoos are often the larger versions as these tattoos can be expanded onto the lower arm or the inner arm to give the tattoo a much larger surface to spread and create a design that is eye-catching as well as stunning. With all that said, here are some of the best upper arm tattoo designs for you to choose from!

Ornamental tattoo ideas have been a part of the world of tattoos for a long period of time and have come in different shapes and styles that can cover either the whole body or a specific part of it, like this tattoo which is an upper arm sleeve design.

Ornamental tattoos take a simple design and incorporate various elements that can become a symbolic tattoo idea according to the preference of the wearer.

Cool arm tattoo ideas like this design can be tweaked in style and shape, making them great bicep tattoos, upper arm tattoos, inner arm tattoos, half-sleeve tattoos or they can cover the entire arm.

Since the inception of tattoos, floral designs have been a mainstay in the tattoo world because of the vast amount of flower species that currently exist in the world.

As a result of this diverse number of flower species, floral tattoos have become one of the coolest tattoo ideas for people who love to showcase their calm nature to the world.

Floral tattoos come in various awesome designs and can even be altered into badass designs that suit both men and women.

Small tattoo designs like this idea can be great sleeve tattoos, but if you are looking to change the placement, you can get this tattooed on your lower arm or chest. However, a cool design like this should be flaunted and work great as a half-sleeve or full-sleeve tattoo design.

If you want to draw attention to yourself, then dragon tattoos are one of the many cool arm tattoo ideas that you should think about getting tattooed on yourself!

Dragons have been a part of folklore all across the globe and have been included in many mythological stories and are a part of various cultures and traditions where they are often seen as having a negative or a positive impact on society.

Line-work tattoos like these popular arm tattoos are a great way to show your love for the world of body art by getting them inked on your skin, and if you are feeling adventurous, you can always change this from an upper arm tattoo idea to a full-arm tattoo by asking your tattoo artist to incorporate your entire shoulder and inner arm, making this design a full-sleeve tattoo.

John Ronald Reuel Tolkien, also known as JRR Tolkien, is one of the most famous writers in the world and is known by most guys and girls as the creator of the world-renowned Lord of the Rings series.

The books and movies have been a part of the ever-growing literary culture and are seen as a masterpiece that can be thoroughly enjoyed by people of all ages.

Thanks to this popularity, there are vast LOTR tattoos all around the world that people don on their skin to pay tribute to the series.

This upper arm tattoo is one such design that incorporated various elements of the series into the shoulder design as it takes a few factors that are important to the plot in the form of the One Ring and Aragorn’s dagger among other elements.

If you are not a fan of the colourwork, you can get your tattoo artist to ink this on your body in all black ink or get another related upper arm tattoo on the other hand.

With its rising popularity, anime has become one of the modes of entertainment that have created a plethora of tattoo ideas that suit the shoulder, chest, forearm, legs, back, and other parts of the body.

Simple arm tattoos like this design are a few of the cool arm tattoo ideas that make use of a panel directly from the manga and create a tattoo design based on it.

The simple design of a panel with intricately drawn figures in the panel showcases the talent of the artist which plays an important factor in choosing an artist for yourself that no matter what will bring out the best of your tattoo selection.

An upper arm tattoo idea like this can also be tattooed on the shoulder, forearm, or can be turned into inner arm tattoos or given a full sleeve or full arm tattoo form by enlarging the size.

Tarot cards have been used over the years as a way to gain insight into the past, present, and the future and are one of the most common ways to predict the supernatural, because of this, tarot cards have also been used in the tattoo industry and there are a plethora of tarot tattoos just like this one.

The sun and the moon both have different symbolism individually, but when combined together, they represent a universal belief and the emergence of opposites of each other, i.e., light and darkness.

Tattoos like this design can be great inner arm tattoos that you can flaunt! Not to forget, thanks to the flexibility of tattoo designs, you can get this enlarged and this inked covering the full arm in the form of a full-sleeve tattoo, and if you are uncomfortable with the idea of prying eyes, you can easily hide tattoos like this by wearing a long sleeve shirt.

A unicorn is a mythological creature that has the form of a horse with a single horn on the forehead. Unicorns have been part of my folklores around the world and the unicorn symbolism is used to represent innocence and chastity as recorded in old tales, only virgins could tame a unicorn.

As of now, the unicorn definition has shifted from such tales and these creatures are now seen as cute and lovable animals that people relate themselves with.

The popularity of the unicorn has soared over the years and a unicorn tattoo is almost as common as that of a dragon and small unicorn tattoo designs have become famous.

Geometric tattoos have gained popularity since they were brought into the world of tattoos and rightfully so as they are one of the best ways to show the adaptation of artists all around the world. Geometric tattoos come in various ideas to choose from and the shapes and styles can be anything you desire!

These tattoos are usually small, but you can get them inked in a larger form to make use of all body parts like the shoulder, back, legs, chest, upper arm, inner arm, sleeve, and various other parts.

However, it is suggested to get a good artist as these tattoos should be symmetrical and precise to look good and any small mistake will be noticeable.

Geometric tattoos are of great value if you are looking for a simple, or complex outline tattoo design as they are used to symbolize stability, order, and harmony.

Whales are one of the most majestic creatures to ever exist in the high oceans and this gigantic animal has been part of ancient literature and folklore throughout their existence and has become one of the most recognized animals in the world.

Thanks to this popularity, whales have had various symbolisms and meanings throughout history, the most common symbolism being that of a spiritual guide that controls the elements of the seas and oceans. In many cultures, whales have been depicted as a creature blessed by the Gods with divine qualities and are a soothing addition to the turbulent world.

This whale tattoo takes on a minimalistic approach with its simple form with the waves, moon and stars incorporated into the frame to give the tattoo a calm and soothing look.

Cats are unique creatures when compared to other animals on earth thanks to their quirky personalities and looks. They have served as human companions since ancient times and on several occasions, have been found mummified with their owners, especially in ancient Egypt where the Goddess Bastet, the cat goddess was worshipped.

Cats can be some of the best arm tattoos as they often symbolize intelligence, intuition, prosperity, and feminine power. As is shown in this tattoo, you can add elements like flowers to the design to make it more appealing and beautiful. The placement for tattoos such as this is usually the best on the upper arm, but you can get it inked on the inner arm or tweak the size to create a full sleeve tattoo to suit your preference and do remember upper arm tattoos can take a huge chunk of your time depending on the details being incorporated into them, so be prepared to sit for around 3-4 hours!

Here are some recommendations similar to these tattoos:

Still looking for inspiration, then checkout this blog post about Half Sleeve Tattoo.

How much does an upper arm tattoo cost?

The cost of an upper arm tattoo will vary depending on the size, complexity, and location of the tattoo. Generally speaking, small tattoos can start at around $50 while larger, more intricate tattoos can cost upwards of $500.

How big can an upper arm tattoo be?

There is no real limit to the size of an upper arm tattoo. However, it is important to keep in mind that larger tattoos will take longer to heal and may be more painful than smaller ones.

What is the best upper arm tattoo design?

There is no one “best” design for an upper arm tattoo. It all depends on your personal preferences and what you feel will look best on your body.

What is the healing process for an upper arm tattoo?

The healing process for an upper arm tattoo can take anywhere from 2-4 weeks. During this time, it is important to keep the tattoo clean and dry. You may also experience some itching and redness.