10 Best Unus Annus Tattoo Ideas That Will Blow Your Mind! 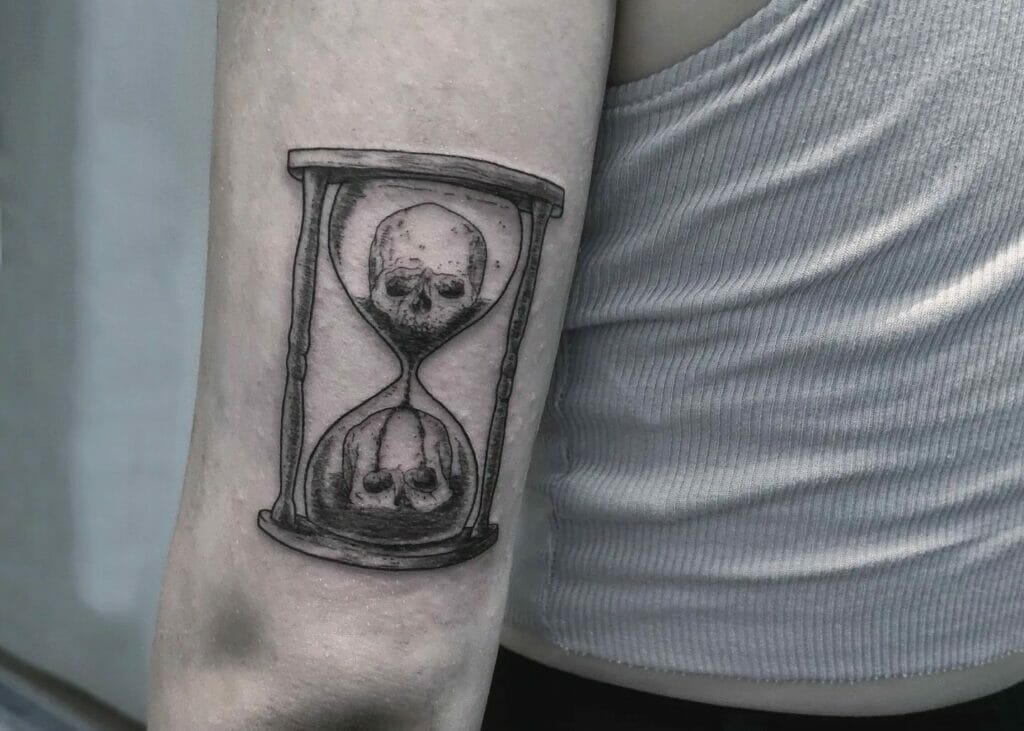 Want to get inked with ingenious but eccentric tattoos, then you can choose from the catalog of unus annus tattoo designs.

Unus annus are two Latin words, and their English meaning stands for one year.

Unus annus is also a nomenclature of a YouTube channel; the main idea behind creating this channel is that videos will be posted for a prolonged period of 365 days, and then the channel will be deleted. This concept can be well adapted for some outlandish ink ideas that will shower high levels of positive vibes on the wearer.

Mark Fischbach and Ethan Nestor are the creators of this channel, and it indeed got deleted one year after its first upload. They constantly entertained the viewers for one long year and dissolved it when the purpose was served. The centerpiece of this YouTube channel was an hourglass with a skull on each side, and the slogan was ‘memento mori’ which is a Latin phrase that means one cannot escape death. Unus annus tattoo concepts similarly rise from the agenda that death is inevitable and one has to utilize every possible millisecond to move against the temporary nature of life. Also, other tattoo ideas have been conceived to dedicate to the outstanding work and entertainment showered by the hosts’ Mark and Nestor of this channel. So these tattoo designs can also be considered memorial tattoos as well as customarily unique sets of tattoos of alacrity. Several tattoo designs have been discussed below in depth.

This is the most common unus annus tattoo design. An hourglass is an ancient time-measuring device with two round glass sections containing a certain amount of sand that exactly takes an hour to fall from the top to the bottom. The same process can be repeated after the completion of one cycle of time. Unus annus tattoos are ideally about proper time management; thus, the hourglass is the most common theme of these tattoos.

The first thing that comes into mind for getting a memento mori tattoo is the concept of an hourglass. This calf tattoo is of two dank skulls fitted in an hourglass where the sand granules are poured from the top of the lower skull. Getting inspired by the YouTube channel or simply by the concept, these hourglass tattoo designs will catch the eyes and transcend the souls of any viewer.

Back tattoos can fit any kind of ink design as the backside offers a formidable space. The canvas is huge, and tattoo artists will be cherished to fascinating ink designs on it. The fans from the humongous fan base of the unus annus YouTube channel can get ink inspired and ink freakish designs as back tattoos.

This passionate fan got her back tattoo done with the idea conveyed by her favorite YouTube channel. Although back tattoos generically represent detailed unique designs, a small badass tattoo will also fit the purpose. Here a small memento mori back tattoo of an hourglass reminds the tattooer to forget everything about the past and plan for the future.

Another concept of some other tattoos that are slightly outlandish but well defines the main theme of the YouTube channel is a timer tattoo. The timer tattoo is a very positive tattoo design that can be utilized in the day-to-day aspects of life. Hurdles and obstacles will always be there in life, just the proper mindset is needed to tackle them, and this abstraction can be depicted in this tattoo idea.

This is a cute but subtle unus annus tattoo concept as the timer was an essential part of the entire journey of this YouTube channel. The arm tattoo referring to the default reset form of a stopwatch always reminds the wearer that everything can again be restarted from zero or the beginning. Ink freaks who are somewhat stubborn can get this tattoo done wherever they want and unleash their determining attitude of never giving up on life.

Matching tattoos are done by couples as a notion of intimacy and bonding or by hardcore ink freaks on either pair of legs or arms. There is a wide range of options for matching tattoos that can be inked with a bit of quirkiness. These tattoo designs might contradict each other or can complement each other just the way the wearer wants to cast ’em.

These leg tats are extremely cool and can catch eyes at first glance. One monochromatic and one colorful hourglass with craniums has been inked by an ardent fan who regularly watched videos of his favorite hosts, Mark Fischbach and Ethan Nestor. The channel might have been deleted, but the memories that remain forever can be deciphered from these matching tattoos.

In the last streaming video of this popular YouTube channel, hosts Mark Fischbach and Ethan Nestor entered a coffin as a sign of the last goodbye. Final episodes and season finales are always tough, and this was an emotional moment for most fans as they could barely watch this heartbroken scene. So a dedicated coffin tattoo is properly justified for the fans who want to reminisce the memories.

This is an arm tattoo of a coffin, a quite realistic tattoo that guides the wearer always to take the positives from dead memories. One half of the coffin art is shaded in black, and another half perfectly fits the skin tone, which intensifies the look. The popular term memento mori in Italic font wraps the coffin and leaves the perfect mark of a dedicated memorial tattoo idea.

Unus Annus And The Skull Tattoo

Any unus annus tattoo representing a skull inside an hourglass is the obvious design. Other skull tattoos associated with the genre of unus annus represent the inescapability of death. So a skull and memento mori tattoo will always leave positive impacts, lest not some exceptionally dank tattoo art.

This forearm tattoo is extremely detailed and creative. Bold black ink has been used to ink one half of the skull, and the terms unus annus and memento mori. One needs to have an intrepid personality to ink these tattoo designs; the result will surely catch the eyes of the viewers.

Thighs are that part of the legs which hurts less while inking a tattoo. The muscular parts and the extensive area of curvature can fit engrossing designs leaving people awestruck. A thigh unus annus tattoo can be the ideal memorial tattoo with an ocean of illustrative designs.

This huge and elaborate unus annus tattoo design has every element in it. The wearer dedicates this tattoo to her favorite content creators whose videos helped her to recover from her mental breakdown. The term memento mori, the hourglass with skulls, and the timer make this tattoo an idiosyncratic work of art, encouraging more and more tattoo enthusiasts to ink unus annus tattoos.

Butterfly tattoos represent purity and sophistication. They are one of the most common tattoo themes and can be inked anywhere on the body, irrespective of gender. To create some out-of-the-box tattoos, butterfly tattoos can be modified to form a plethora of designs, one of which can be inspired by the services of Mark and Nestor on their creative YouTube channel.

The skull of the traditional unus annus tattoos is placed on the butterfly’s head in this design. The death-skulled butterfly inside the phrase memento mori is inked with dark black inks and displays an eye-catching look. It is a small tattoo, but such designs are intricating and exceptional in the category of unus annus tattoos.

Unus Annus And The Devil Tattoo

Scary tattoos have endless results, from the theme of Halloween to a scary house tattoo to the evil face of Nemesis. They can surely chill the spine of the viewers and keep them at the edge of their seats. A re-structured tattoo of the unus annus skull to a satanic ghoul can hold the same meaning as an unus annus tattoo and can also represent the courage to overcome the disbalances of life.

An evil figure holding a death ax is the ultimate devil tattoo one can crave for. The term memento mori is perfectly inked on the curvature of the ax blade, and it always reminds the user to uplift his soul spiritually. The journey of the YouTube channel was fascinating, and this conclusion has been dedicated through this engraving devil tattoo design

Typographic tattoos or quotation tattoos define the favorite verses or phrases of the wearer. It can be long with more than one line or precisely in the form of a favorite slogan or terms. Typographic tattoos look extremely cool with stylish fonts and can be inked anywhere on the body, showering plenty of hidden meanings.

Dedicated to the continuously uploaded videos of his favorite channel, the tattooer inked a creative memento mori tattoo. The word ‘unus’ in bold black ink and the word ‘annus’ in outlined black ink deliver an out-of-the-box typographic message. Also, the idea of the unus annus tattoo timer has been inked along with them to enhance this arm tattoo idea further.

Unus annus tattoos are restricted to a certain group of fanatics only who were deeply moved and touched by the activities of Mark and Nestor. But on the other hand, they can also invite experimental tattoo lovers who represent a major portion of the freakish tattoo community. Some other tattoo options can also be executed.