101 Best Unique Music Tattoo Ideas That Will Blow Your Mind! 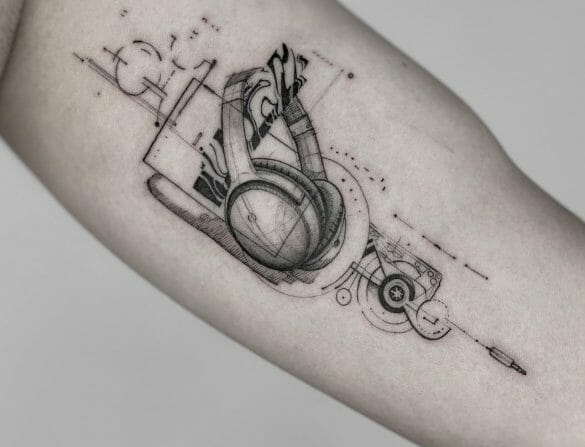 If you like to hum now and then and are passionate about tunes, then getting a unique music tattoo is a great way to celebrate music.

The Latin word “musical” has been derived from the ancient Greek word “mousike” which translates to muses.

According to Greek mythology, the muses are the nine deities under whose guidance the arts and science were conducted. Around the earlier parts of the seventeenth century, the modern term music was first used in its true sense.

The historical origin of music and musical instruments is quite unclear and is still a topic of hot debate. Bones with holes have been found of pre-historic origin, which looks exactly like a flute, but their purpose of usage has not been able to be identified by archaeologists.

As time passed, different instruments and genres came to the front and today, music is a global phenomenon. The popularity of music has also made it a choice for a tattoo design by many music and tattoo lovers.

The music notes are one of the most common music tattoo designs you can find worldwide. These music note tattoos can vary from small to medium and are put accordingly in the body. The small ones can be inked on the fingers, wrist, neck, shoulder, and ankle, while the medium ones are placed on the forearm, bicep, back, shin, calves, and chest.

Either traditional black ink is used for this music note tattoo, or varied colors can be used. These music symbol tattoos are done by a musician to honor their profession or to show the love they have for this beautiful phenomenon. They can also be done by an admirer of music who not only likes listening to music but also want to carry a token of it with themselves.

From Beethoven to Arthur Rubinstein, the piano has been the choice of legends in the classical genre. Many musicians even start learning music in their childhood with pianos. These have made the piano tattoo design one of the most in-demand tattoo choices in the industry. Depending on the size, this music tattoo design can be put on the forearm, back, chest, bicep, thighs, and calves.

Now the piano tattoo design can be inked in a variety of formats. Piano keys in black and white can be inked which will give a psychedelic feeling to the viewer, piano keys fused with music notes, a realistic grand piano, or a piano ripping out of the skin. Popular both among men and women, the ink is chosen according to the design choice by the tattooer.

Unique Behind The Ear Music Tattoo

Putting music notes behind the ears is probably one of the coolest tattoo designs one can get inked with. Through the ears, we listen to any kind of sound, and doing a music note tattoo behind the ear will resonate with the idea of listening and love for music.

While getting music tattoos here, a person must be careful as it is quite a sensitive area and the experience can be painful. The ink used for getting these music tattoos is mostly traditional black.

One of the most popular instruments in the music industry around the world is the guitar. It can be divided into three types acoustic, bass, and electric guitar. It is quite natural for this reason that a guitar tattoo design would be a great choice for not only people who can play this instrument but also for those who love to listen to its tunes.

Inking a guitar tattoo not only symbolizes the love for music but also demonstrates the concept of peace, self-realization, happiness, and melody. The guitar tattoo design is an extremely creative design that can be fused with flowers, barbed wires, ribbons, or a cross to make it more meaningful and appealing.

One of the unique music tattoo designs is the microphone tattoo. These tattoo ideas reflect a variety of creative elements, which is more than representing a music lover. The size of these music tattoos varies from medium to large and best blossoms on the chest, bicep, forearm, back, thighs, and shin.

A microphone is an object that is not only used for musical purposes. They can be used for giving speeches, in rallies, or for announcing something. Getting a microphone tattoo done on the body reflects the idea that the tattooer wants themselves to be heard by the public. It is a cool idea and a great tattoo choice for people who want to express their creative ability.

A perfect music tattoo choice for music lovers who has a leaning toward the old-school style. The concept of the gramophone, which later was modernized into a record player, was first invented by Thomas Edison in 1887. People with a true passion and love for music who adores the advancement of technology in music often get this tattoo done on their bodies.

These music tattoo ideas can be done by inking the device in the body with traditional black ink in the form of line art or can be done in a realistic manner by using colorful ink. This music tattoo is popular both among men and women and is extremely soothing to the eyes. The best place to put them is on the back, chest, forearm, thighs, calves, and bicep.

Musical notes, microphones, earphones, or musical instruments are done following the concept of minimalism and are mostly done in black ink. People who are introverted or shy and do not want others to know about their musical taste or their love for music mostly get these music tattoos done. They can also be inked due to their clean and crisp design.

Inking a favorite word from books to lines from a favorite song on your body has become the new trend in the tattoo world. A variety of things can be represented by this tattoo design and mostly the words or lines are written in traditional black ink. The best place to put these tattoos on the body is on the wrist, forearm, shoulder, neck, back, and fingers.

The tattooer can demonstrate their love for a certain song by inking particular lines of that song and also pay homage to the artist who has composed it. The song or a particular songline may aptly reflect the personality or feelings of the tattooed, which can also be represented with this music tattoo. Popular country and pop tracks like ‘Hotel California’, death metal like ‘God is Dead?’ or progressive rock like ‘Another Brick in the Wall’ are some of the famous choices.

The couple music tattoo ideas are both a sweet design and a great way to show love for each other. Two people can share the same taste in music or they can have different tastes but they must always respect each other’s opinions. This is not only in the case of music but also in every sphere of life.

This is exactly what the tattoo reflects and helps two people to better connect with each other. These matching music tattoos can be done on the wrist, forearm, fingers, ankle, shoulder, and back. The tattoo designs mostly consist of microphones, musical notes, instruments, or song lyrics and are mostly done using black ink.

Music is something that is divided into various genres. Ranging from classical to pop music the choice of the tunes can vary from one person to another. Now there are thousands of artists around the world performing these different genres and someone’s voice, performance or composition may inspire you very much in all wakes of life.

To honor that person and their works, many people get tattooed with the image of the musicians. Some of the popular musicians whose tattoos are famous are Freddie Mercury, David Bowie, John Lenon, Elvis Presley, Amy Winehouse, and the list is countless. The best places to put these tattoos are on the forearm, chest, back, shin and thighs.

Music is something that can make you sad or can soothe your soul and that is the reason it has appealed to the mass in this gigantic manner. And for the same reason, music tattoos have become extremely popular.

Other music tattoo ideas that can be incorporated into the body are: