10 Best Uncle Iroh Tattoo Ideas You Have To See To Believe! 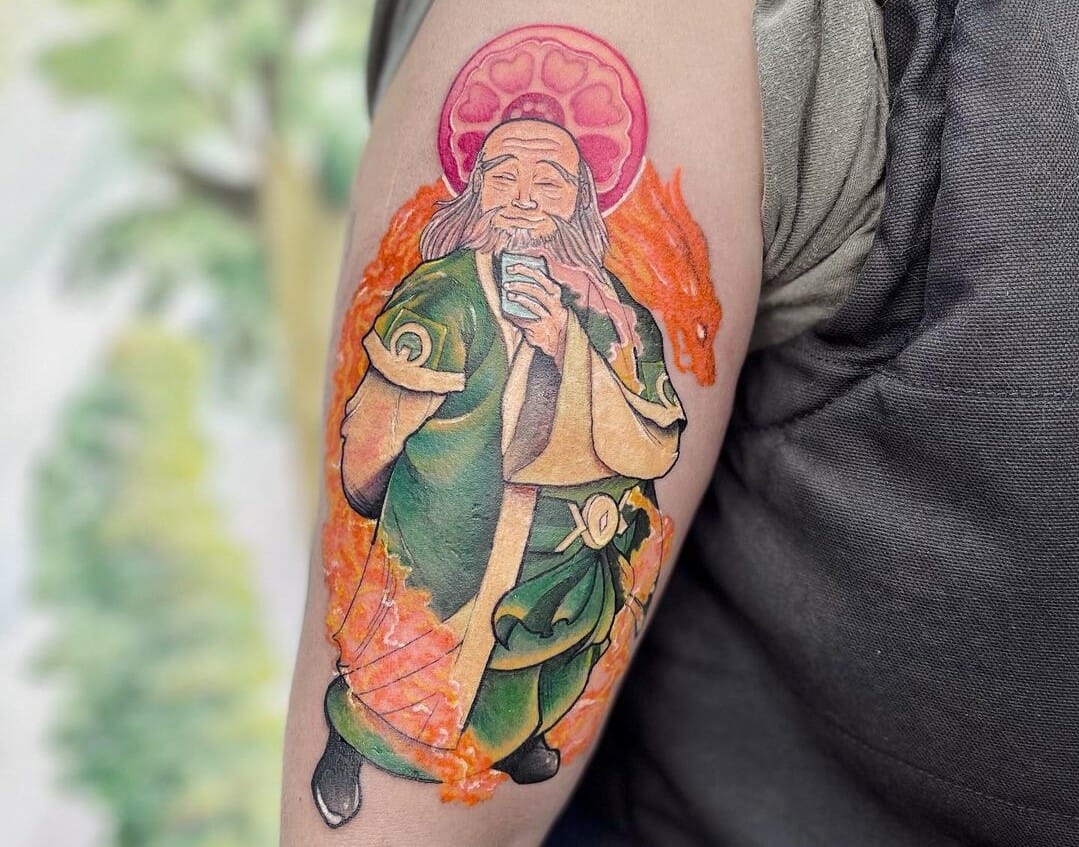 Need a tattoo flaunting your love for Iroh from ‘Avatar: The Last Airbender’? Here are some awesome uncle Iroh tattoos you must check out!

Uncle Iroh, also known as General Iroh, despite being a side character, has been one of the most favourite characters of everyone who has watched the series.

Iroh was a firebending master who was the former Crown Prince and the retired General of the Fire Nation. He was the uncle and mentor of Zuko, the banished son of his younger brother Ozai. Iroh was a kind, open-minded, generous, wise and humorous firebender. He believed in living life to the fullest and choosing one’s own destiny. He was a spiritual firebender who wanted to maintain the balance between all four elements: Earth, Water, Air and Fire. The absolute fan-favourite Iroh even fought his way to the Spirit World after he lost his son. He even entered the Spirit World after his own death, unlike other humans. Even in his old age, Iroh was quite a womanizer who was called ‘handsome’ on many occasions. He is a believer in the philosophy that encourages peace, harmony and mutual understanding. Nevertheless, when he feels threatened or sees injustice or violence against the innocent he can become quite a frightening nemesis. And these are the qualities that make him so special and loveable that tattoos inspired by him become more popular with each passing day. And here are some Avatar: The Last Airbender tattoos inspired by Iroh:

Iroh’s fondness for tea has been made pretty clear in the series. As we all know, Ginseng and Jasmine tea were his all-time favourites. During his retired life, he was extremely passionate about his tea shop in Ba Sing Se. And that essence has been captured really well in this piece of art. And so this simple tattoo outline would be a cool choice if you love Iroh. If you know an artist with a set of steady hands, go for this one.

Iroh Sitting In The Sun Tattoo

It was the sun that allowed firebenders to control fire. This tattoo excellently features Iroh sitting in the sun, enjoying a cup of his favourite tea. The use of the red colour is pretty dominant in this one. The colours of this artwork make it look vibrant and radiant. With a skilled artist and some care from your side during the healing process, you are definitely going to rock this calf tattoo.

This one represents two things Iroh was passionate about: tea and Pai Sho, a two-player game. According to legends, the game was invited by spirits and has been popular ever since it was created. And the lotus tile in his hand is used in Pai Sho. The usage of blue and green in this watercolour tattoo is really beautiful and intricate in nature. Getting this one tattooed might be expensive and painful, but we assure you, it’s all gonna be worth it.

The Dragon Of The West Tattoo

Iroh’s claim of having killed the last living dragon and his ability to breathe fire earned him the title of “The Dragon of the West”. But the truth was that he lied about killing the last dragon to keep the master dragons alive. Hence, the nickname he was given was indeed just as meaningful as this work of art. If you know someone with experience in the field of tattooing, you would not regret getting this one inked.

Iroh and Other Avatar Symbols Tattoo

This awesome work of art features things that are symbolic to the series. The tea in Iroh’s hand, the Moon and Ocean Spirits in the form of koi fish and the symbols of the four nations (Fire, Water, Air, and Earth Nations) inscribed on the lotus tile are what makes this tattoo unique without the use of colours. It’s just that the black ink shading has to be executed well in order to make this one look perfect on your forearm or calf.

This beautiful artwork is a symbol of the title Iroh had earned. It features Iroh as the Dragon of the West. The use of the three primary colours of light i.e. red, green and blue is marvellous. And the usage of white ink is also worth mentioning. It gives this work of art a realistic, sparkly touch. An artist with expertise and reasonable rates will be perfect for getting this one tattooed on your skin.

Iroh And The Spirits Tattoo

This one is a bit similar to another one we have on our list. This presents Iroh, the moon and ocean spirits (named La and Tui respectively) in koi fish forms and the lotus tile from the game Pai Sho, in a magnificently colourful manner. This tattoo is extremely intricate, as well as realistic. But it is going to need a lot of attention and care from both the artist and the bearer, while and after tattooing.

If your love for Iroh is real, what could be better than a black and white Iroh inspired artwork inked onto your skin? Iroh was extremely fond of tea. This one thing that Iroh loved never failed to make him happy. And this pleasing piece of art flawlessly captures that essence. If your artist is skilled at the dotwork technique, this one would look absolutely aesthetic. So wait no more and go for it already.

This work of art highlights Iroh’s happiness that he gained from brewing tea. Iroh, in spite of going through grief quite a few times, was a happy soul. He acquired his happiness from a variety of things like singing, playing instruments, playing the two-player game Pai Sho and most importantly tea and serving tea. This colourful skin art has caught his spirit really well. And all you need now is an excellent artist to ink you.

Want an Iroh themed back tattoo but do not want to cover the whole back? We have got the most perfect thing for you. This one presents the smoke coming from Iroh’s teacup transforming into a dragon that basically represents Iroh (the Dragon of the West) himself. It is also a beautiful blend of colours. With some money, patience and a skilful pair of hands of an artist, you’ll be all set to get this one inked.

Mentioning this is meaningless, but the character, Iroh, received a lot of love from the viewers of the series. He was a role model for a lot of people who watched his story unfold with time. This one anime character never failed to inspire lives and even tattoos. Given this symbolic value attached to the character, it comes as no surprise that Iroh happens to be a hot favourite for anime tattoo lovers. We hope our list of Iroh inspired tattoos was helpful for you to choose, customize or create one for yourself. And if your confusion is persistent, we’re here to offer you some more designs for you to think about:

10 Best Umbrella Tattoo Ideas You Have To...

10 Best To Infinity And Beyond Tattoo Ideas...

10 Best Time Tattoo Ideas You Have To...

10 Best Tiki Tattoo Ideas You Have To...

10 Best Tiger Tattoo Ideas You Have To...

10 Best Taurus Tattoo Ideas You Have To...