10 Best Twin Flame Tattoo Ideas You Have To See To Believe! 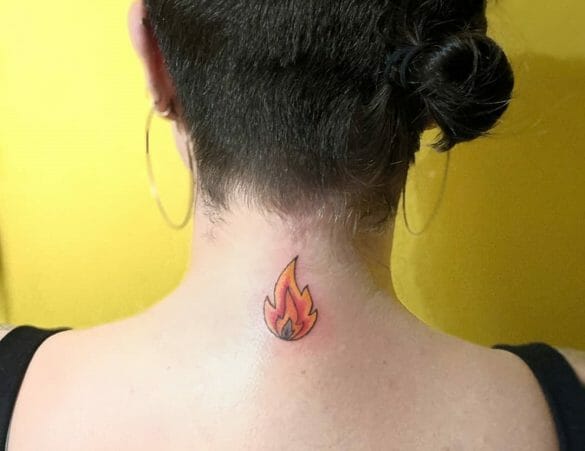 POV: You have a twin flame and you would like to etch this bond forever. Sorry for being so direct, we promise the list of twin flame tattoos is pristine!

A twin flame tattoo is a staple for couples who are contented in their relationship and find their love to pass all tests that life throws at them.

Although the terms “twin flame” and “soul mates” are widely used interchangeably, they are not the same. Your twin flame is someone who is a direct reflection of yourself in the most uncanny ways possible and step into your life to make a significant impact on your persona.

Though it is fairly rare, twin flames are seen to maintain their bond forever despite the challenges that inevitably come into the equation when you are dealing with your mirror self. Your twin flame might as well be your significant other, a friend, or even a person that you have known for a couple of months. As fascinating as it already is, finding your twin flame is a purely organic process that happens when your energies are in tune with each other. In other words, twin flames are spiritual wholes who confront and challenge each other in becoming a greater individual. Surreal, no? Tattoo enthusiasts find this motif so exceptionally gratifying that they tend to ink themselves with twin flames tattoos, be the bond lasts or not. Hence, a twin flame tattoo could represent the wearer’s acknowledgment of their twin flame’s role in their lives, or their spiritual journey, or even a celebration of the myriads of hardships that they went through to keep their flames burning together. If you have found your twin flame, or just taking notes for whenever they arrive, keep scrolling to find our picks for your inspiration.

Twin flames are often seen as complementing and conflicting feminine and masculine energy, and as popular conventions go, they can be equated with the Sun and the Moon. These two space objects often float around your feed for they are a favourite among artists dealing with two opposite energies in the spiritual context. The Sun is often associated with the masculine energy with its rage and fury, while the moon achieves the tag of being the feminine one owing to its coolness and serenity. This union of the two flames brings forward a perfectly suited for you to ink your twin flame tattoo. A simply outlined tattoo like this one will strike a balance between overcrowded and plain tattoo ideas.

If you prefer smaller tattoos, ink your twin flame symbols in this fun and meaningful way that you can even share with your other half! The crescent moon in both these twin flame tattoos presents with direct imagery that marks its identity in the most subtle way. Opt for such a small twin flame tattoo while keeping the symbolism well connected.

This twin flame tattoo plays with the idea of two incomplete souls becoming one after they unite. Although the idea of twin flames advocates against this notion, the motif is a wonderful way to highlight the spiritual journey and growth that the twin flames undertake. Here the body remains at the center while the mind is divided between the polar opposites represented by the reddish ink used to ink the radiating sun and the more mellow shades to portray the moon. The triangles by extension highlight the lasting eternity that the twin flame journey entails. Moreover, a triangle is a geometrical symbol of stability that has proven to last a lifetime. You can get this wonderful depiction of twin flames on your arm, forearm, or even on your side abdomen as is shown in the picture.

The East considers dragons to be the epitome of spirituality and awakening and thereby a fitted trope for your twin flames tattoos. This fine-line monochromatic tattoo depicts the twin flame love with a dark and a light dragon ornamented with subtle dot work to enhance its effect. Mention must be made of the numerals at the top of the design. 11:11 is a recurring design that has gained immense popularity. Angel numbers like 1111 are consecutive repetitions that have great significance in numerology. Many people are of the opinion that 11:11 is the twin flame number which when repetitively encountered means that your twin flame is very close to your reach. Spooky, huh? All in all, the angel number along with this perfectly laid out conception will make a spectacular back tattoo for you to flaunt!

Small twin flames tattoos have created havoc in the tattoo industry and justifiably so. These compact designs strike a neat balance between elaborate ideas and minuscule tattoos. Here, the artist draws a heart with bi-coloured flames that aren’t too bright nor dull. The twin flames here assume the colours of purple and blue, which you can definitely alter with red and blue, or red and yellow-based on your preference.

If you have found your twin flame and soul mate in the same being, this is your cue to etch your twin flame love in such a pictorial tattoo. The twin flames cover the entire forearm with the woman burning bright in the shades of red and the man pacifying in blue. The colour splash is vibrant and effortlessly sways attention towards the union of the two souls. The infinity symbol near the wrist is noteworthy owing to form a conjoined loop of two individual circles that again reminds us of the wholeness of individuals even without their twin flames.

Running out of ideas for your twin flames tattoos? Well, one clever and literal way to portray twin flames is to utilize the idea of burning matchsticks. Matches are well-suited for this purpose and you can craft them based on how intense you would prefer them to be. The artist here attempts to review the sticks in a serious light that shapes up to form a cathartic fire that cleanses the soul. This symbol could be interpreted as the effect that twin flames have on each other’s spirituality. The connotation of the twin flame journey is rather romanticized in pop culture showing only the sunshine and rainbows. The truth is when you meet your mirror image things are bound to get messy and out of place. You would burn and be shaped into a newer self and the process isn’t really one of the easiest. The idea here attempts to capture exactly that new beginning that both the selves enter. The red and black combination further brings the gravity of the process to fruition.

This review is another way how you can couple polar opposites in the same frame. The interaction of opposite energies has attained a balance between chaos and harmony and the universe is a testament to that relationship that is to last an eternity. What makes this tattoo art such a stunner is its union of opposites represented with such minute details. There is a fair share of colour blending and tedious line work that brings out this graceful body art. For people interested in the cosmos, ink this twin flame love on your arms or a quirky site as that of the side abdomen and cherish this union for a lifetime.

The twin flame infinity symbol tattoo is a go-to for people opting for ideas filled with symbols. The symbol imitates the age-old lamp burning bright over the platforms of infinity. The infinity forms one of the stable symbols that highlight the impact of such a stellar union. Together with the triangle, the infinity is enclosed within the periphery created by the circle. If you notice carefully, all the symbols that are used in this twin flames tattoo provide much more information than they can pictorially describe. The circle is the epitome of perfection and has been regarded as the symbol of ideal. In the same way, the triangle is tagged as the most stable geometric shape and the infinity says a lot about eternity. These symbols when taken together can form a powerful mark that you can control by interchanging colours and introducing creativity.

This twin flame symbol tattoo is crafted in the same line of thought, showing the infinity symbol in a quirky loop. The red and black draws attention without being too loud about it. You can ink both these twin symbols on your body parts with maximum exposure.

Ink the angel number as a way to regard your twin flames. Keep the twin flames simple and crisp with a plain 11:11 that will paint your soul on your skin. Add a small triangle beside this symbol to indicate twin flames in a seamless way.

This is another offbeat way to etch twin flames without using any flames for that matter. The artist twists the word “eleven” as a mirror image of the first one, thereby bringing about the twin flames tattoos in a completely different review. Get these tattoos on your forearm and let people sway in their charm!

Couples can easily employ the imagery of lock and key to stress on their twin tattoos. The symbol is rather less used in this tattoo trope and can be brilliant to execute the twin flames effectively. The addition of triangles is a significant mark and complements the other half better.

Colour your flames in an inside-out manner and there you have your twin tattoos to match with your significant other. The fiery red flames complement the ashy center, perhaps showing a glimmer of the individual’s persona in the two flames and vice versa.

Twin flames tattoos are impactful remnants of the Yin Yang symbol that shows conformance of conflicting forces. Apparently, it is not just in human relationships but the law of the universe to keep its flames burning by similar yet challenging energies. Either wear these on your own or twin with your twin flame and create statement pieces with spirituality! Below are some suggestions to ease your troubles: