101 Best Tribal Sleeve Tattoo Ideas That Will Blow Your Mind! 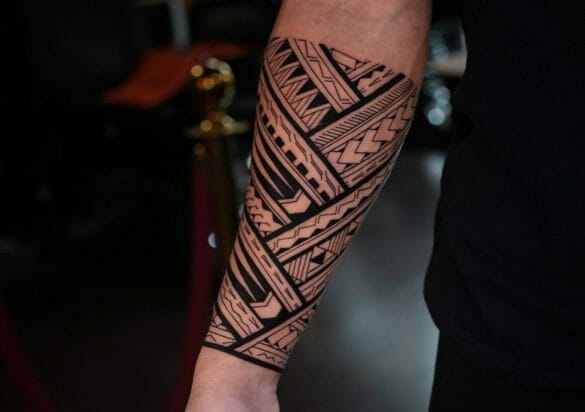 If you’re looking for good tribal sleeve tattoo designs, then find your favorite from the list of best tribal tattoos in the article below.

Tribal tattoos are pretty common for people who choose to get sleeve tattoos. Tribal sleeve tattoos usually are steeped in history and heritage.

Sleeve tattoos are quite common among people because the arm is one of the parts of the human body which is easily expressible. Tattoo artists can get creative with their designs as well because they get enough space to draw their creative work. Tribal tattoo meanings are not simple, but they carry the stories of the people and the tribes and the wearers can express their social status through their half arm sleeve, full sleeve tattoos, or even full body art at times. Choose the best tribal tattoos from the article below and sign up to get a tattoo and get it to your artist or get creative and make your own unique design.

Not a lot of people go for 3/4 sleeve tattoo ideas, but like all other types of sleeve tattoos for men and women, tribal designs are perfect for 3/4 sleeve tattoos as well. They are becoming more and more popular among people who want to get a large tattoo, but also want to be able to hide them easily with rest of their arm sleeve visible. They are also perfect for people who don’t want to get their tattoo covered up by the watch or jewelry they wear. The picture above is of a 3/4 sleeve tribal tattoo with beautiful tribal tattoo designs. It contains maori symbols, geometric patterns, spiral, and wavy patterns similar to most maori tribal arm tattoos. The tattoo started from the shoulder and the arm band design ends at the forearm.

Forearm tattoo ideas are very popular and common because forearms are on the places in a person’s body that are most visible. People can show off their tattoo designs the best way and it is also one of the least painful areas in the human body. Tribal arm tattoos usually cover the entire areas of the specific part of the wearer’s skin. Hence, they look amazing as evident from the picture above. It shows a beautiful sleeve tribal tattoo that looks like mandala drawings that has been drawn on the wearer’s forearm. This particular design is a pictish tribal tattoo design. The simple spiral designs, black blocks and more are quite common in celtic and pictish tribal tattoo designs.

Maori tattoo ideas were started with the indigenous people of New Zealand. The tattooing style is known as ‘Ta Moko’ and included specific artwork from the culture. These tattoo designs held significance to the culture and their heritage. It carried their story and the people considered them to be a symbol of valour and strength. The tattoo style has become popular in today’s world, so it’s important that we learn about the designs properly before tattooing. The picture above shows a large full sleeve Maori tribal tattoo covering one side of the wearer’s chest and shoulder. It contains beautiful patterns similar to other maori tribal tattoo designs with black blocks. All of the patterns in the design hold quite significant meanings to the culture.

Tribal designs include different types of designs that come from different cultures which have deep meaning to them. In Native American and Aztec culture, their attire, in Filipino culture, their nature and more are the most common for tribal sleeve tattoos. However, the designs that are very common among all culture are animals, like wolves, tigers, or eagles. All these animals and birds have significant meanings to different cultures. The picture above is of a tribal wolf sleeve tattoo drawn on the wearer’s forearm. The tattoo of the wolf looks like drawings as it’s drawn in realistic styles with a beautiful scenery of the nature of night. The moon on the top of the mountains, river in front, and a wolf howling at the moon completes the intricate tattoo design.

Some of the most famous Aztec tribal tattoos include the symbols of their culture. However, the most popular Aztec tribal tattoos include designs of Aztec warriors who are loved, respected, and coveted in their culture. They also look incredibly beautiful even when they are drawn in simple black and grey ink as evident from the picture above. It shows an upper arm sleeve tattoo of an Aztec warrior wearing a headgear and a warrior costume. The design contains a shield with Aztec symbols. There is another Aztec artwork and symbols that is quite common in their culture. The realistic design of the warrior with the symbols is emphasizing the tattoo perfectly.

If you’re wondering ‘how much is a tribal sleeve tattoo’, that depends on the type of tattoo and the size of the tattoo. You may have chosen the best tribal tattoos from the list above, but if you haven’t, then here are a few suggestions –

You can get a full or half body art starting from the shoulder or chest and get your tribal arm tattoos that you can design by getting inspired from the list above.

Most tribal tattoos are drawn in black and grey ink. However, colored and white ink tattoos are getting popular. Hence, you can also choose a tribal design and make it a white sleeve tattoo for your next tattoo.

What is the history of tribal sleeve tattoos?

Tribal sleeve tattoos have been around for centuries, with their origins dating back to various indigenous cultures across the globe. In many cases, these tattoos were used as a form of identification or expression of cultural affiliation. Today, tribal sleeve tattoos remain popular among both men and women, and are often seen as a way to display one’s strength and masculinity.

What are the meaning of tribal sleeve tattoos?

There is no one meaning of tribal sleeve tattoos, as they can be interpreted in a variety of ways. In general, however, they are often seen as a symbol of power and strength. They can also be used to express cultural affiliations or to pay tribute to one’s ancestors.

What is the best way to design a tribal sleeve tattoo?

When it comes to tribal sleeve tattoos, there are a number of things to consider. First, you’ll need to decide on the size and placement of the tattoo. You’ll also need to choose a design that is both meaningful and aesthetically pleasing. Once you’ve done this, you can then begin the process of designing your tattoo.

How do I care for my tribal sleeve tattoo during the healing process?

After you’ve gotten your tribal sleeve tattoo, it’s important to take care of it during the healing process. This means keeping the area clean and moisturized, and avoiding any activities that could irritate the tattoo. Once the tattoo has healed, you can then enjoy showing it off to the world.

How much do tribal sleeve tattoos cost?

The cost of tribal sleeve tattoos will vary depending on a number of factors, including the size and complexity of the design, the experience of the artist, and the location of the tattoo shop. In general, however, you can expect to pay anywhere from $200 to $1000 for a quality tattoo.

What are some common misconceptions about tribal sleeve tattoos?