10 Best Tribal Raven Tattoo Ideas That Will Blow Your Mind! 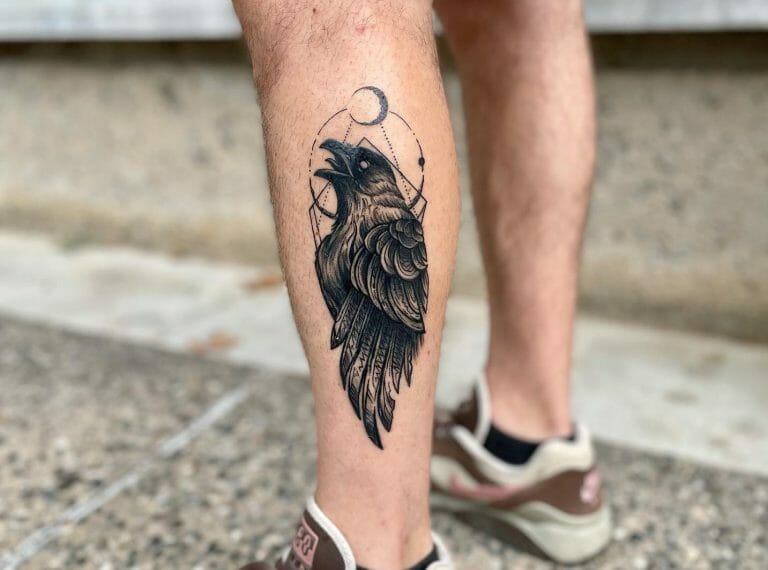 With various contrasting symbolism attached to it, the raven is considered to be a mysterious bird. Creatively use its beauty through a simple tribal raven tattoo!

Since historic days, ravens have a fair share of conflicting symbolism related to their presence and arrival.

Ravens are one of the most widely founded and talked about birds in many ancient cultures, known for their negative symbolism and some positive aspects as well. Through its associated meanings and mysterious appearance, the blackbird is now a well-loved part of tattoo culture.

A raven or crow is a common sight around our living spaces, having zero effect on its surrounding environment. However, back in the historic days, its association with Greek and Norse mythology added to its mystery and led people to believe that the bird used to carry powerful secrets. Ancient times linked the animal to wisdom, good luck, magic and several other beliefs, which are still pretty relevant in culturally rich regions and practised in a manner by keeping a safe distance from the blackbird or believing its arrival as causing agent of events.

Greek mythology signifies ravens as a symbol of bad news, darkness and death, with its relation to Apollo, the god of prophecy. On the other hand, Vikings used ravens as a symbol for Odin’s ravens, who would narrate the world’s happenings. Even Native Americans believed ravens to be the bearer of magical powers, who carried wisdom, protection magic, and were the ultimate creating power behind the existence of everything. Literature is drenched with diverse symbolism for ravens, which is why its popularity in tattoo cultures continues peaking!

The tribal raven tattoo uses line art to create a very detailed full-chest piece. The raven tattoo design is one of its kind as it assimilates geometric patterns and line art to create the shape of a bird which carries different curves and feather details. The tattoo majestically stretches across the chest and is made for large spaces. Therefore, if you wish to get a similar tattoo, either choose your back or chest area to get it done. Instead of using bold colours, the tattoo features shades of grey that make it more intense through scattered darkness.

A perched raven tattoo in neo-traditional style perfectly exhibits its negative symbolism through bold, dark colours. This tattoo explores the dark side of the raven, sitting over an axe with hollow eyes. The tattoo is scary and gorgeous at the same time, with intricate detail on its wings incorporating mystery to the entire art piece. A slight dot work can also be seen on the edges of the axe adding to its depth.

Eye tattoos are another visual treat for tattoo lovers; imagine incorporating a raven into it! The tattoo is extra special for anime lovers as the eye and crows featured on the tattoo are not random but associated with the famous show Naruto. Popularly known as a Sharingan, the eye tattoo features several crows to depict its extreme power.

The tattoo artist has used several shades of red and black to make the tattoo as vivid as possible. If you are a Naruto fan hoping to get a raven tattoo, this one could be your calling!

Instead of featuring a crow tattoo, the raven inspired sleeve tattoo makes for a unique design. The tattoo uses raven feathers as its inspiration and replicates the same pattern on the arm to create feather-like features. A combination of bold colours, light shades and dot work can also be seen adorning the arm, adding more depth to the artwork.

The tattoo can either be created on the shoulder or sleeve, but its location must not be played with more than that, as the entire essence can be lost with the location change.

The double-headed raven symbolism relates to Odin’s raven, part of Norse mythology. The pair of ravens Huginn and Muninn are known in Norse myths as a pair of ravens that used to fly over the world and bring information to the god. The information mostly referred to the war on Earth and the people who lost their lives in the war. The ravens were bestowed with the gift of speech and were a symbol of wisdom and a happy afterlife.

The tattoo features several raven tattoos compiled together to create a cohesive piece for the chest. The raven tattoos seem to hover around a ring that can be perceived as an eclipse-like structure or a protection magic ring to protect against evil entities.

The tattoo is pretty detailed in depicting a raven carrying several poses around the ring. The tattoo artist has also added ink-spill-like effects to strengthen the aura of this tattoo. The tattoo can have several meanings, so feel free to opt for whatever suits your belief.

The gothic raven tattoo features a creepy artwork of a nearly dead yet alive raven. The raven appears extremely vicious through its illustrated sharp claws and the rib cage, which is supposedly sticking out of its muscled cover. The tattoo artist has done an exceptional job at raven’s expressions which appear vicious and pretty real, narrating its symbolism in this tattoo to lie more towards death or negativity rather than wisdom.

Raven tattoos keep changing their symbolism through simple addition or removal of elements, just like this tattoo which appears to be mystic through incorporated books and skulls. As much as ravens are enough to carry the strength of this tattoo, the artist has added additional features to offer a deeper meaning to this illustration.

The detailed work on the raven’s feathers is applaudable, while the background elements are equally alluring, making the entire tattoo worth your attention and inspiration.

A complete flip from the usual raven tattoos, the tattoo feature raven in a new light and colours, to be precise. The tattoo artist has tried depicting the fierce nature of a raven through vibrant red, orange and yellow colours, resembling fire-like features. The tattoo artist has entirely used bold colours to fill the raven and its highlights through inconsistent colour patterns. The tattoo is perfect for the sleeve or shoulders.

Raven tattoo ideas usually hover around black and white tattoos, though you can always play around with colours and include additional elements for an elevated look. As a symbol in different cultures, the raven holds different meanings, which you can use to express your own story. We hope the tattoo list will enable you to find your next ink.

Here are some more recommendations to find inspiration from. Change colours, and flip elements to switch tattoo placement to personalise the tattoo as much as you want. The idea is to use these designs to make yours, so be open to experimentation and find your perfect match!