101 Best Tribal Cross Tattoo Ideas That Will Blow Your Mind! 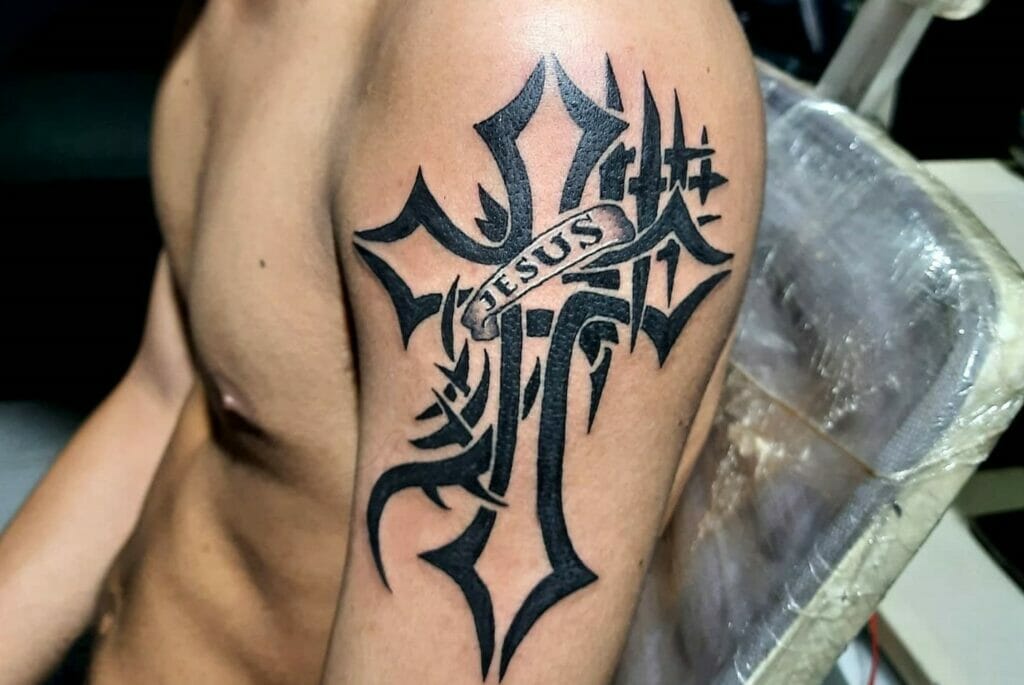 Tired of the same old cross tattoo designs? Get a tribal cross tattoo instead, and put a little spin on the traditional design.

Tribal cross tattoos can be considered an umbrella term.

Since every tribe has a unique culture, so the depiction of each tribal cross tattoo varies. Although the cross is now commonly associated with the Christian faith, did you know that the cross symbol is a much more ancient symbol than it appears?

From the Greek goddess Diana to the Egyptians, and even among the Hindus, the cross symbol has been a part of various cultures. No doubt, traveling across so many cultures and periods, the meaning of the cross has altered greatly over time. Similarly, the meaning of the cross is altered depending on which tribal tattoo design it is inspired by, just as tribal tattoos and their significance also greatly differ in general. From narrating the story of one’s heritage to celebrating achievements, there is a lot of room to play with tribal tattoos. One thing is common in most tribal tattoos. They are usually done in black, in bold and sharp strokes. A tribal cross is usually used as a symbol to ward off evil. Of course, you can always get a tribal cross tattoo to display your pride in your identity to the world.

We have a stunning upper arm tattoo on our hands. On a traditional-looking Christian cross, the bold black markings of the typical tribal style can be observed. However, these lines are not wholly meaningless. They are tattooed to resemble wings. To highlight the wings, the cross has been inked on a lighter grayscale. The unisex design can be rocked by both men and women alike.

The cross tattoo attached with wings can be interpreted in many different ways. Popularly, it is taken as a sign of religious freedom. On the other hand, sometimes, it is also used as a symbol to remind one of a near-death experience, thereby urging one to live life to the fullest. However, it may also be tattooed to commemorate the memory of a loved one who has already passed away. So, if you are getting this tattoo, make your meaning.

This piece exudes sheer beauty. If you are a person who has searched high and low for amazing full-sleeve tribal cross tattoo designs, here is one worth considering. The impression of the cross symbol is interestingly not done through tattooing but by the absence of it. Various tribal patterns run all over the arm, creating the cross on the sky of the body through clever placement of these shapes and strokes.

You must be wondering, what does a tribal cross tattoo mean in the Maori culture? The closest to a cross in Maori culture is a Koru, which, just like the cross in the Christian religion, is associated with new birth and growth. The spear-like pattern in the tattoo also has a separate meaning. They symbolize wisdom and strength, as well as the struggle where both of these qualities come to play.

Among the tribal designs, this one wins our hearts because of its intricate simplicity. Instead of a plain square cross, here, the sharp and asymmetrical strokes create the symbol of a cross. For those who are getting inked for the first time or are just terrified of needles, this tiny tattoo might be one of the best tribal cross tattoo ideas you will come across.

Since this tribal tattoo style is more basic as in, the influence of no specific tribe can be determined; hence, this can be taken as one of the universal tribal cross symbols which tribesmen used once upon a time to keep evil at bay. Of course, one may also use this tattoo as symbolism for their devotion to their religion, which is what cross tattoos usually denote.

Just have a look at this cool piece; it is perfect as cross tattoos for men. The tattoo spreads over the entire calf of the leg up until the ankle. In this tribal tattoo art, many different shapes from the Maori style can be detected. At the very center, a turtle can be traced, whose back is made to look like a set of overlapping fabrics. Also, the spear symbol can be seen, which is inked in the shape of a cross.

As mentioned once already, the spear depicts the individual’s courage and strength. This tattoo design is fit for a warrior. Turtles, on the other hand, are a motif for travel and navigation in Maori culture. Hence, the tribal cross tattoo shows the determination of the person who is seeking strength and willpower to sail through the tumultuous waves of life.

The site for tattooing is the nape of the neck on the body for this piece. When it comes to simple tribal cross tattoo designs, this is one of those tattoos which say a lot with very little. A traditional cross can be seen, which is completely red. Around the cross, tribal tattoo designs are seen, which almost look like nails.

The main reason for getting this tattoo is usually tied to faith in religion. The red is indicative of the blood of Jesus and the sacrifices he made to save humanity. Hence, this tattoo is a sign of strong spiritual commitment not only toward God but also toward mankind.

The unisex cross design appeals both to guys and girls alike. This is one of the great Celtic tribal cross tattoo ideas one can come across. The Celtic cross can be easily differentiated from other styles because of the circle in the tattoo design. The typical knots of the Celtic design are arranged in a manner to look like a tree in this cross. Even though completed with only black ink, the tattoo is worth marveling at. At the top, a little butterfly is seen perched on the cross.

Apart from the Christian religion, the circle in this cross is a symbol used to signify the halo. Moreover, the circle also represents pride in the Irish faith. The butterfly, a mark for transformation, can designate the change the faith brought in the world.

Here we have a fun little twist on the same old cross tattoo. This tattoo can travel across cultures. The cross is designed to make it look like a wooden one. One intriguing addition is the way it has been tattooed. The cross looks as though it was pinned into the flesh on the arm. The tribal impression is created through the use of what looks like ropes tying the cross together. Finally, a quote is found that reads only the strong survive.

With the use of shadow and highlighting styles, depth is given to the wood. Moreover, the person with this tattoo takes it as a reminder to persevere, no matter how trying the times get. Remember, this tattoo design might take patience, so clear your schedule out for the day.

Guys and girls, do you lose baseball? Here is a quirky tattoo to let the world know about it. Against the black ink on the entire tattoo design, only the stitching found in a baseball is given a red hue to enhance the beauty of the tattoo. The cross is structured with a circular frame, typical of the Celtic cross design. Inside the baseball, the name of the wearer is written in cursive. You can also change it up by inking your loved one’s name or of your favorite player.

Of course, since this is an out-of-the-box tattoo design, you can create your message with this. For us, it looks like pledging your loyalty and love for baseball.

Shark teeth represent protection and guidance, while the spearheads stand for the sting of animals or the warrior nature of a person. The waves allude to life and its nature to constantly change. Tiki being a Polynesian God, the Tiki eyes indicate fertility and protection. Finally, the turtle shells point to longevity and rest. The structures, when taken together with the Psalm extract, not only wish for the well-being of one but their family and rejoice in the idea of the unity of all with God.

A sexy back tattoo on the body is always mesmerizing. Men and women can both carry this with grace. The Celtic shape of a cross is tattooed to make it look like it is made out of thorns. The sharp and lean strokes on this piece add to the charm of the tattoo.

While the thorns look eye-catching, they also have a religious message behind them. Jesus wore a crown of thorns, which the tattoo seems to suggest without being obvious. Therefore, this design shows the deep religious devoutness of the wearer.

One thing is clear; you should always approach elements of any culture respectfully and learn the significance of the design that you ate opting for.

We hope the collection of tribal cross tattoo designs fascinated you as much as they did us. Hence, let us squeeze in a few more noteworthy mentions before saying goodbye to these attractive patterns.

What is the meaning of a tribal cross tattoo?

What are some popular designs for tribal cross tattoos?

Some popular designs for tribal cross tattoos include: Celtic crosses, Crosses with geometric patterns, Tribal crosses with animal motifs, Dreamcatcher-style crosses, and Boho-inspired tribal designs. Designs can be combined in a variety of ways to create unique and meaningful works of art. Other elements such as feathers, arrows, flowers, and stars can also be added to the design to further customize it. Tribal cross tattoos can range from simple and subtle to more intricate and detailed designs, depending on what look you are going for.

How much does a tribal cross tattoo cost?

The cost of a tribal cross tattoo will vary depending on the size, complexity, and detail of the design. Generally speaking, small tattoos can range from $50 to $125 while larger pieces may cost up to $500 or more. Prices also vary by artist and studio so it’s best to shop around for the best deals.

How do I choose a tribal cross tattoo design?

When choosing a tribal cross tattoo design, it’s important to pick one that has special meaning to you. Consider the origin and cultural significance of the design and what it represents to you personally. Think about where you want to put the tattoo on your body and how big or small you want it to be. You should also research different artists and studios to find the one that best fits your needs. Lastly, be sure to discuss any questions or concerns with your artist beforehand so you can make an informed decision.