101 Best Trash Polka Tattoo Ideas You Have To See To Believe! 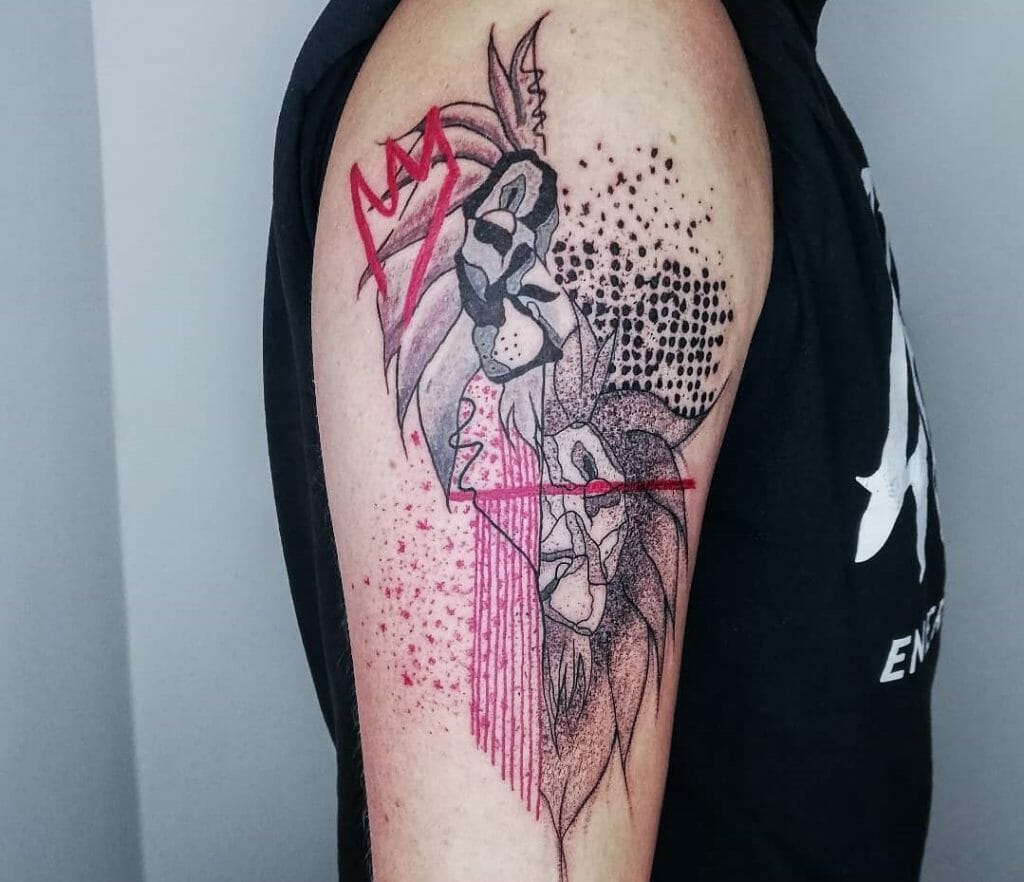 Searching for your perfect trash polka tattoo designs? Don’t worry, we’ve got you all covered. Let’s check them out and choose the best.

Not only is it a new trend among the creative audience who likes playing with various elements of abstract figures but also this trash polka style has proven that the bold graphic combination of a red tattoo with black lettering in trash polka design has the power to exhibit fine art and genius flair in the tattoo world.

The Tattoo Of Time

One of the most requested and popular designs of trash polka tattoos is the clock. These tattoo designs are famous for their artistic creativity and awesome combination of various elements.

The ink used here is black which is used as the primary colour. Another ink that has been subsequently used is the colour red, a perfect complement in the trash polka tattoos designs adding the perfect contrast that the tattoo essentially needs.

The clock in the middle has been perfectly emphasised by the text written underneath which says ‘time flies’ and right beside it, the word ‘enjoy’ diversifies to add meaning to this tattoo. The tattoo artist has also used various creatures like the crows in this design to add more depth into this tattoo.

This trash polka tattoo is one of the most liked designs of all. The most unique feature about this tattoo is the animal that has been selected – the lion, which depicts strength and power that the tattoo screams of. The placement of this tattoo is also suggestable in the chest area; as the symbol of cross makes it more spiritual and authentic.

If you look closely at this tattoo, you’ll notice the red cross that has been inserted in this tattoo covers one of the lion’s eyes and is giving it a spiritual note. The tattoo artist has used various textures and lines to make this tattoo appear quite realistic. Flaunt it on your skin and radiate bravery and courage.

This trash polka tattoo design is quite perfect for its nature. There is a human skull that has been placed in between various polka dots and brush strokes in circular lines to make the figure look more chaotic. This is the specialty of the trash polka tattoo.

Right under the skull and the polka dots, there is a star enclosed inside a double-line circle with a red background and a brushstroke pattern. Although this tattoo is quite abstract, the colour scheme of this tattoo and the various figures, brush strokes and patterns that have been used in this tattoo makes it unique.

The Darkness Of War Tattoo

This right here is one of the best trash polka tattoos designs. It reflects the dark war front line where a soldier has been drawn firing a gun. Right above him is the chopper that is used in war to inflict damage to the enemies.

The chaotic scene that has been portrayed in this tattoo fits very perfectly with the theme of the trash polka tattoo designs which is ‘beauty in chaos’.

The tattoo artist has done a great job in using shades of black and grey to bring realism to the tattoo and has also used shades of red to capture the attention to the centre of the tattoo.

This tattoo right here is a Spanish inspired tattoo where a man holding a gun has been portrayed on the large part of the arm. The size of the tattoo is such that it will look great, even in the legs or also at the back.

There are various honeycomb designs that are surrounding the man’s figure including various texts in spanish both in black and white. There is a windmill and various other figures that has been drawn to capture the essence of the tattoo.

This tattoo right here is a Russian inspired trash polka dot tattoo. The tattoo artist has used patterns that look like brush strokes and has also tried to splash various colours of red throughout and has made different patterns using black lines.

The tattoo artist has also tried to give a holographic look to the tattoo. Once you look closely at the bicep region of the man you will find that there is a figure of a Roman God and there are various roman texts on top of the figure to complete the essence of this Roman-inspired tattoo. This element adds a myterious yet interesting taste to the tattoo.

The Tattoo Of Abstract Images

This tattoo right here is basically a vision where the tattoo artist has used various figures, various scenes and various notes to portray art. Looking very closely at the back of the sleeve you will find that there is a figure of an ice skating guy.

Right beside it, you will find that there are abstract patterns and figures that have been drawn using black, grey and red inks.

This trash polka tattoo is for our anime lovers. As an anime fan you will easily be able to notice the anime character that has been drawn in this tattoo. It’s the protagonist of the Dragon Ball Zee anime and his name is ‘Goku’.

A very unique and aesthetically pleasing way to represent this tattoo, in which the tattoo artist has used the main character in the centre and has highlighted various features of that character using red and black ink overlaid on a splattered red background.

The tattoo artist has also added honeycomb patterns on top of the character and has tried to make a frame around the figure using black strokes. Right under that, he has used the polka dots in both black and red. The name of the anime character has also been inserted in this tattoo for better representation. A must try tattoo for all anime lovers.

This tattoo represents a blend of Valkyrie tattoos, Rune tattoos and Norse tattoos. As you can see, there is a figure of a God like creature that has been drawn in the very centre and that figure has been given large angelic wings along with the Valkyrie symbol. It is a symbol of feminine power and prestige.

The entire tattoo looks very religious and is a tribute to the Valkyrie culture. The use of black and red ink in this tattoo is remarkable as it brings out more depth and punch into it’s visuals. N

What is a trash polka tattoo?

A trash polka tattoo combines elements of traditional tattooing with a unique, punk rock twist. The result is a bold and eye-catching tattoo that is sure to turn heads.

How is a trash polka tattoo made?

Trash polka tattoos are made by combining elements of traditional tattooing with a unique, punk rock twist. This includes using bold lines and bright colors to create a tattoo that is sure to turn heads.

What are the main elements of a trash polka tattoo?

The main elements of a trash polka tattoo include bold lines, bright colors, and an overall punk rock look. This type of tattoo is sure to turn heads and make a statement.

What are some other tattoo styles similar to trash polka?

Some other tattoo styles that are similar to trash polka include traditional tattoos, new school tattoos, and Japanese tattoos. These tattoo styles share many of the same elements, such as bold lines and bright colors.

How long does a trash polka tattoo take to heal?

A trash polka tattoo usually takes about two weeks to heal. This is due to the bold lines and bright colors used in the tattoo. It is important to follow the aftercare instructions provided by your tattoo artist to ensure proper healing.

How much does a trash polka tattoo cost?

What does trash polka tattoo mean?

Trash polka tattoos are unique tattoos that combine elements of traditional tattooing with a punk rock twist. The resulting tattoo is bold, eye-catching, and sure to turn heads. Trash polka tattoos often include bold lines and bright colors, and they typically take two weeks to heal. The cost of a trash polka tattoo will vary depending on the size, complexity, and location of the tattoo. Generally, smaller tattoos will cost less than larger tattoos. Tattoos that are located on visible areas of the body, such as the arms or legs, will also generally cost more than tattoos that are located on hidden areas of the body, such as the back or chest.