101 Best Traditional Wolf Tattoo Ideas You Have To See To Believe! 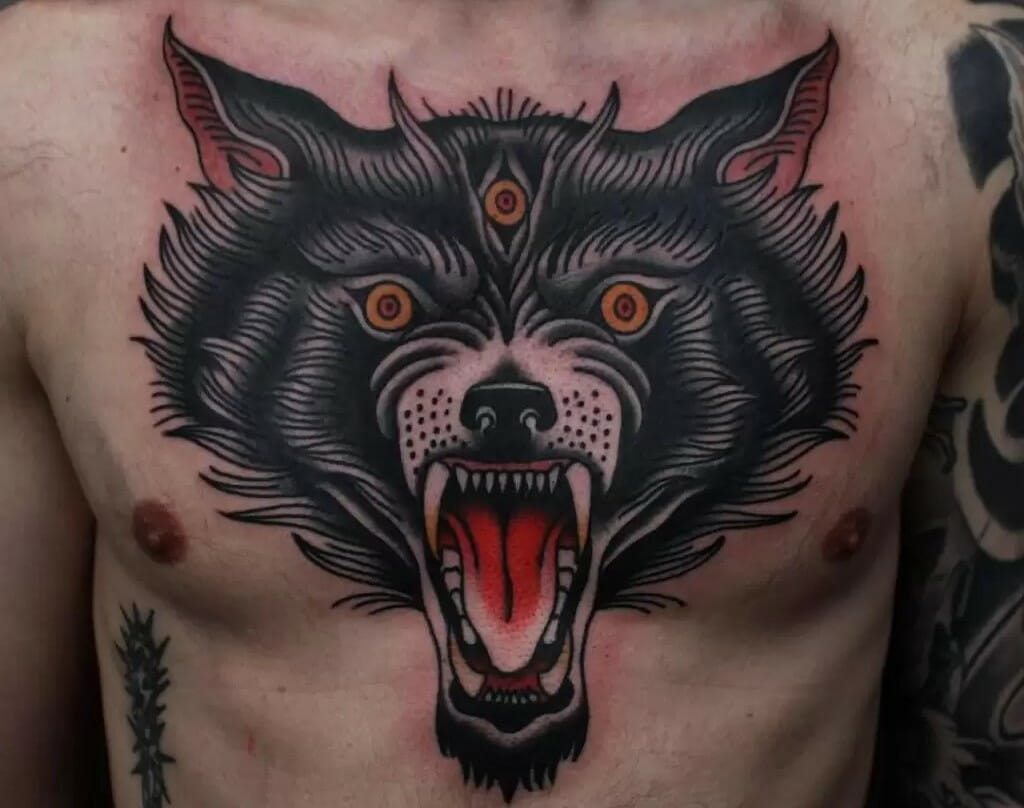 If you are looking for a traditional tattoo that promotes the idea of unity and harmony, then the traditional wolf tattoo is definitely for you.

Traditional tattoos have been gaining quite a prominence in the tattoo circuit lately.

Owing to their bold black borders and limited but vibrant colour palette, traditional tattoos are becoming a popular choice for most tattoo enthusiasts. The wolf is a favourite choice of a subject when it comes to traditional tattoos.

The wolf has many different meanings across many cultures around the globe. This wild animal occupies a central position in various customs and traditions from the jungles of India to the rituals of the Native Americans to the tropical forests of China. In Norse mythology, we come across a monster wolf called Fenrir that threatens mortals and even gods, while the Chinese folklore, ‘The Wolf of Zhongshan’, revolves around how an evil wolf tries to outwit a Chinese scholar only to be beaten to death in the end. Turkish mythology narrates how the Turkish God, Tengri, but the only two surviving children of the vanquished Turks in the care of a she-wolf which conceived 10 pups in subsequent years who were to become the future Turkish rulers. Indians attribute the wolf symbol to certain intellectuals only and generally associate great respect with the animal. The Japanese deem the wolves as spiritual messengers of Shinto gods and divine protectors of travellers. The folktales of Siberia and Rome consider the wolves as guardians of infants and sacred creatures that protected Remus and Romulus who were the founders of the city of Rome.

However, wolves are generally considered evil creatures in European and Scandinavian fairy tales and legends. The most popular example of this type of representation is found in fairy tales of Medieval Germany, such as ‘The Three Little Pigs’ and ‘Little Red Riding Hood’.

Once upon a time, the wolves were indigenous to Ireland and commonly made their way into Celtic mythology with many Celtic tribes claiming themselves to be descendants of the wolves. They did not pose as a threat but were generally perceived as a symbolism of power, transformation, protection, and acted as some sort of a spiritual guide. A Celtic wolf represents loyalty and pride and consists of twists and knots in the tattoo designs akin to the traditional style of Celtic tattoos. This Celtic traditional wolf tattoo is a work of beauty that also comprises the traditional Celtic knots that symbolise eternity. This traditional wolf tattoo is a compelling symbol of eternal power, life, and glory and can be a necessary addition to your arsenal of body tattoos.

In Japanese culture, the wolves are seen as a symbol of power and protection. They are specifically said to watch over travellers and act as a protective totem during hard times. These wolves that are indigenous to the country of Japan are relatively much smaller in size when compared to the wolves in America or Europe and look much like wild dogs. As tattoo designs, the Japanese wolf symbolises kinship and respect for spiritual powers and are thought of as heavenly messengers of the kami spirits. For this, the Japanese traditional wolf tattoos portray wolves wearing bells which is a traditional ritual practice to catch the attention of Shinto gods. You can still come across traditional wolf shrines in Japan even though the Japanese wolves have ceased to exist more than a century ago. If you are looking to get a Japanese traditional wolf tattoo, you can opt for a modern tattoo style or the traditional Irezumi style.

Various Native American tribes have a special place for wolves in their religious rituals and cultural practices. The animal is often seen as a symbol of power, loyalty, inspiration, hunting, and courage. Staying true to the American traditional style, this traditional wolf tattoo makes use of a restricted colour palette that consists of largely black as well as red and yellow hues. The wild wolf head is shown to be snarling and violent with its baring teeth and long whiskers and makes for a stunning wolf tattoo choice. You can also couple this traditional wolf tattoo with other Native American tribal symbols such as the moon, war bonnet, sun, or feathers.

The wolf tattoo stands for an appetite for complete freedom, sharp instincts, and deep intellect. On the other hand, crimson, like the wolf tattoo, has a number of symbolic meanings in different societies across the world. The colour is generally related to excitement, romance, and intense passion. It can also stand for sensuality and a determination to succeed. Hence, a crimson traditional wolf tattoo might be perfect for all those individuals out there who are determined to beat all odds and succeed no matter what.

While the howling wolf and the moon are generally romanticised in popular culture, the snarling wolf poses more of a threat. A wolf is usually not a threat to humans and is indifferent to us as it considers us neither prey nor conspecifics. Reports of wolves attacking humans are very low in recorded history and are only found on very rare occasions involving extreme conditions and circumstances. This traditional wolf tattoo makes use of strong bold lines and black and red hues to draw a lone wolf baring its sharp teeth moments before an attack. Go for this American traditional wolf tattoo if you want to symbolise your wild and carefree spirit and a sense of indifference and independence.

We have all heard of the legends of the howling wolf and the moon and the myths surrounding the wolf moon and werewolves. The werewolves are human beings cursed to turn into wolves when there is a full moon. Ancient Greek myths are the source of how we today picture the werewolves – Zeus, the Greek God of Thunder was so displeased with Lycaon that he turned the mortal into a wolf. The oldest recorded chronicle of a man turning into a wolf can however be found in the Epic of Gilgamesh which dates back to 2,100 BC. The eery legends of werewolves can be found in popular culture with the most famous examples being Professor Remus Lupin in the immensely popular ‘Harry Potter’ series, Jacob Black (played by Taylor Lautner) in the youth sensational series ‘Twilight’, or horror maestro Stephen King’s ‘Cycle of the Werewolf’. This traditional howling wolf tattoo uses black and red colours to create an immensely eye-catching piece of body art.

In many cultures and traditions worldwide, the eagle serves as a figure of dominance, strength, focus, good luck, and freedom. The eagle tattoo is a very popular choice and has been found as a totem across various myths and legends of China, India, ancient Egypt, Aztec, Native American, Sumerian, and Hun. The majestic bird has even found its way in many national flags and military symbols, most notably being that of the United States. The prey bird is a sworn enemy of the vicious snake and this tattoo couples the eagle, with a snake inside a human skull and a wolf. This traditional wolf tattoo shows the inner conflict present within all of us as we go through life and tries to pictorially represent that with various images of animals found in Nature that are famous for surviving by beating all odds.

What does a traditional wolf tattoo mean?

A traditional wolf tattoo typically represents strength and courage, as well as a respect for nature. It can be seen as a sign of protection and loyalty to those around you. The wolf has long been associated with family and community, so it is also seen as a symbol of unity. In some cultures, the wolf is even thought to represent leadership and intelligence. The wolf is also a symbol of freedom and independence, so it can be seen as a reminder to stay true to yourself. Overall, the traditional wolf tattoo is a representation of strength, courage, protection, unity, leadership, intelligence, freedom and loyalty.

What are the different elements of a traditional wolf tattoo?

Many traditional wolf tattoos incorporate several different elements into the design. Common elements include howling wolves, mountains, trees, feathers, and arrows. Other popular items to include in a wolf tattoo are dreamcatchers, stars, or crescent moons. Additionally, some people opt for a more abstract approach such as lines and shapes that represent the various aspects of the wolf. In short, a traditional wolf tattoo could include anything from howling wolves to abstract elements that symbolize strength and courage.

How can I customise my traditional wolf tattoo?

When it comes to customizing your traditional wolf tattoo, the possibilities are endless. Depending on what you want to symbolize in your tattoo, you can choose colors, symbols, and shapes that have personal meaning for you. For example, if you want to represent strength or courage, you could incorporate items like arrows or feathers into your design.

How much does a traditional wolf tattoo cost?

The cost of a traditional wolf tattoo can vary greatly depending on the size, complexity, and artist. Generally, smaller tattoos cost less than larger ones due to the amount of detail involved in their design. Additionally, the skill level of your chosen artist will also affect the price of your tattoo. In general, you should expect to pay anywhere from $50 to $1000 for a traditional wolf tattoo.