10 Best Traditional Sparrow Tattoo Ideas You Have To See To Believe! 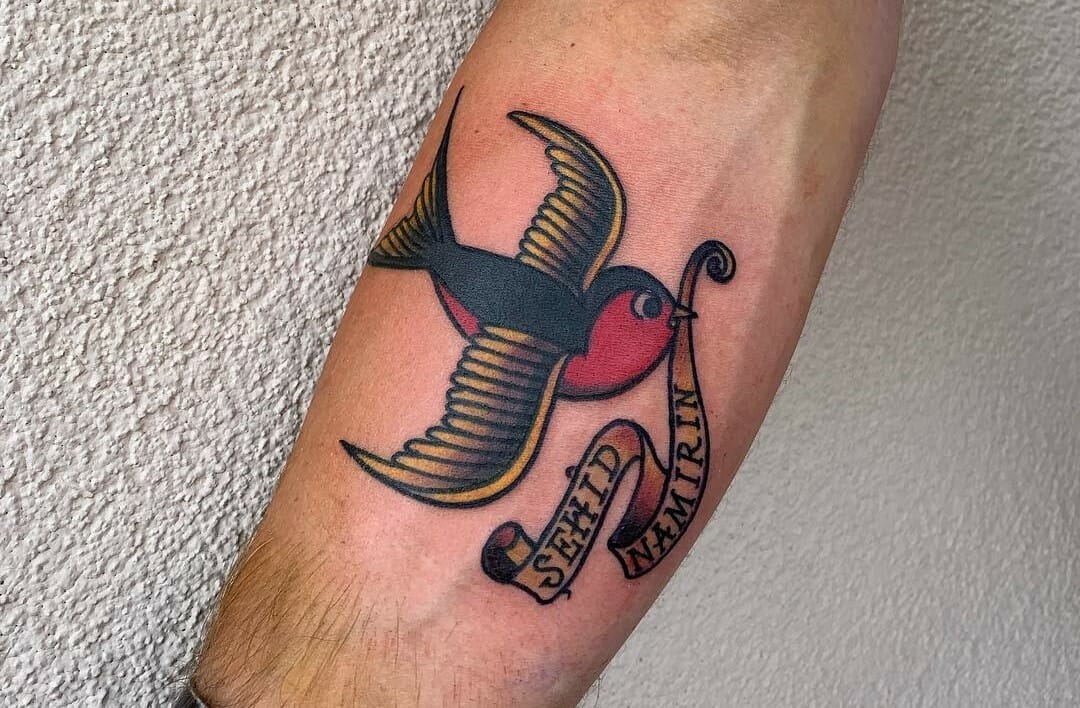 Choose from this list of traditional sparrow tattoo ideas to celebrate the resilient spirit of all things small and tiny, in this large universe!

Sparrows are wonderful creatures. Small but springy, these fluttering little birds had once been heralded as chariot-bearers of Aphrodite, the Greek goddess of sexual love and beauty.

Sappho, the archaic Greek poet from the island of Lesbos has time and again invoked sparrows in her poetry to commemorate the feminine virtues of gentleness and compassion, she believed, these birds possessed. Besides, sparrows are also revered in many parts of the world as fierce protectors of sacred and ancestral knowledge.

Most terraces and balconies across the world are frequented by sparrows on a daily basis and their carefree chirp weaves around us a cocoon of comfort and familiarity. Sparrows are an inextricable feature of the modern cityscape. This has led poets and filmmakers to conceptualize their presence in art as a metaphor for the physical and intellectual inertia, the sheer monotony that life in a city breeds at the heart of every individual. Current studies have shown that sparrows are one of the most sexually active birds with a fertility rate as high as 2.2, which is one reason why sparrow tattoos have come to symbolize love, copulation, and carnal indulgence.

When it comes to sparrow tattoo designs, there is a wide range of options to choose from. Be it a minimalist black and white sparrow that signifies liberty or a grand and elaborate design incorporating the universal within the personal, traditional sparrow tattoo designs are a great way to experiment with motifs and tropes ranging from sexual to cosmopolitan. Therefore, without further ado, let us go through these ten amazing designs where each bird tattoo tells a unique tale.

In Pirates of the Caribbean, Captain Jack’s arm tattoo resembling a flying sparrow is a popular choice among tattoo lovers, especially since Johnny Depp decided to get it done in real life to pay tribute to his cult character.

This signature Captain Jack Sparrow tattoo has come to be regarded as a paradigm of relentless freedom, free will, and the wild spirit of man. It is a minimalistic tattoo design that can be worn anywhere on the body. The classic simplicity of the artwork prevents it from ending up as a symbol too esoteric for the one who is not a great fan of the movie series.

This is a bohemian design featuring two identical sparrow tattoos facing each other. The vibrant colour code complements the tribal theme, and the use of floral motifs lend the whole thing an Oriental charm that is at once compelling and exuberant.

They can be inked in the same way as shown in the picture, or you can choose a different spot on your body where the exposure is better. These bird tattoos can be interpreted either as symbols of communal spirit, joy, and indigeneity or, they can be treated simply as art that serves little purpose besides aesthetics.

This one here is a signature take on the tribal sparrow tattoo theme. The design features two flying sparrows whose posture exudes a sense of exhilaration and freedom.

You can get this one done from a local tattoo shop. It recasts the quintessential animal tattoo imagery by allowing the artwork to focus primarily on the essence rather than the structure. What it feels like to fly uninhibited without external aid is something as humans we would never know, and this sense of missing out on an experience is exactly what this tattoo simulates for the viewer.

A larger-than-life design that mesmerizes with its clarifying originality, here we have a tattoo that celebrates the symbiotic relationship between man and the wild.

The tattoo portrays a ribbon whose both ends are held up by sparrows in their beaks and the ribbon passes through a human face thereby dissecting it into two halves. It can be interpreted as a commentary on the Nature-Culture binary which is more often than not, at war with each other in this world run by steam and coal. It conveys the message of peace and harmony while subtly addressing the dualism invested in human nature.

A tour de force collection of sparrow tattoo images aligned with the themes of space, transience, and temporality, this one is an immediate eye-catcher.

It can be inked across the forearm or the calf. The design combines aesthetics that are at once vibrant and poignant. The imagery of the compass echoes the longing of the sailor at sea for home. It also brings to the surface the implicit threat of losing directions and getting lost forever, which a sailor’s life entails. The sheer ephemerality of life is juxtaposed to the human faith in things constant and certain, for example- clocks and compasses.

A realistic, life-like sparrow tattoo that blends in the white and black ink in such finesse that the artwork pulsates with energy and vigour.

This little sparrow design seems to symbolize freedom and free will since its physique is drawn into a taut state, as is often found in birds before a piercing flight. The size and simplicity of the design allow it to be sported by anyone on any part of their body. You can also team it up with a small quote or your loved one’s name in an archaic font.

The more you try to reach out for meaning, the further it gets away from you. This idea seems to be the pivotal theme of this artwork.

The design implies but does not explain; it suggests but never attempts to clarify. Even the use of tropes is implicit. Aphrodite’s porcelain hands and the sparrow’s tails are all we see before it gets lost in the chaos of artworks. The subtle handling of profound themes renders this tattoo something of the touch of a René Magritte painting. In most of his works, he focuses on the unattainable distance between what we see and what we wish to see.

This is a bird tattoo featuring a sparrow design that strikes a fine balance between traditional style and personal style.

You can get this small bird tattoo inked on your wrist or ankle, which will complement the built-in luminosity of this artwork or tattoo it on your hand as in the image. The use of shades deep and dark accentuates the conceptualization of both the profundity and the idiosyncrasy of the tattoo. Unlike most sparrow tattoos, this one blurs the line of distinction between a sparrow and a swallow tattoo which serves the purpose of challenging the notion of clarity in any art.

An elaborate artwork that seamlessly interweaves fantasy and fusion into a rich tapestry of sparrow tattoos.

The perfect spot for this sparrow tattoo is the one shown in the above picture. The reason is, the slope of the shoulder and the contours along the collar bone add dimension to the design, thereby inducing maximum colour pay-off. This is a fusion tattoo that brings together multiple artistic elements to whip up a magical concoction. The stars, flower motifs, and the big orange dahlia are drawn with such artistic ingenuity that instead of stealing the show, they work in tandem to focus the spotlight on the pale blue sparrow. Inferring from the use of colours, here, the sparrow can be read as a symbol of hope and innocence which also accounts for the unmistakable feminine touch to the entire design.

You can opt for these swallow tattoos if you are looking for something simple and chic. The colours used here are a tad too pale to complement any skin tone whatsoever, so you can experiment with different shades of your preference.

This design features a pair of matching sparrows caught up in a mirror image which can be interpreted as a take on the Self-Other discourse or simply as an aesthetic manifestation. The sparrow tattoo meaning ranges from the cliché to the absurd. As simple and open-ended as this, the design is subjected to an end number of perceptions depending on how an observer is likely to perceive it.

Dead sparrow tattoo or the motif of the dead sparrow is also an extremely popular choice among tattoo lovers. The symbolism of the dead sparrow has been subjected to much debate and controversy. Some say that seeing a dead sparrow signifies impending doom, while others claim that such a sight entails bad luck for the viewer. The dead sparrow is symbolic of the human cycle of life and death, reminding us how minuscule we are in the face of fate. They are often found near humans because they represent humans’ connection with nature.

In general, sparrow symbolism urges you to embrace the little things in life and indulge in its evanescent beauty. In other words, to sport a sparrow tattoo, is to give up on materialism and embrace simplicity in life. Such tattoos drive you to focus your time and energy on only those things that contribute to your inner peace. Furthermore, sparrow tattoos exude positive vibes which are at once compelling and reassuring. No matter how grand your dreams are in life, sparrow tattoos urge you to start small, set immediate goals, and work your way slowly but steadily towards the end. Also, this power animal teaches you to connect with your inner strength and carve your destiny through hard work and loyalty and say no to procrastination.

Apart from the sparrow tattoos included in this list, you can also check out some more designs on this theme here-

10 Best Travel Tattoo Ideas You Have To...

10 Best Tooth Tattoo Ideas You Have to...