101 Best Traditional Skull Tattoo Ideas You Have To See To Believe! 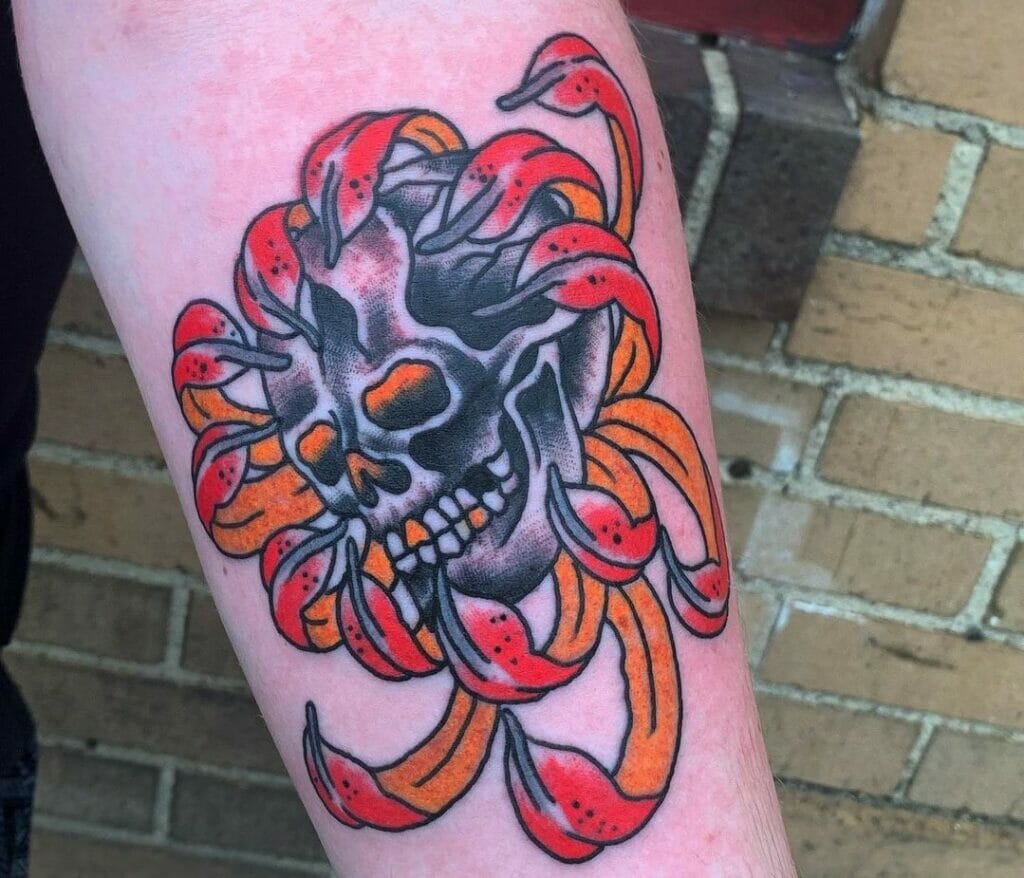 Nothing can go wrong with an enchanting skull tattoo improvised to perfection. Read on for some of the prime and most popular traditional skull tattoo designs.

A skull may represent a fascination with the unknown, magical powers of the afterlife.

The skull is an integral part of every vertebrate that has a bone structure forming its head. So, we all have a skull underneath our flesh, but it’s only visible after our body decomposes, after death.

There is a long history of skulls being used as both a positive and a negative symbol. The skull could represent the return of someone from the dead. The skull tattoo represents death, the acceptance of death, and rebirth and can be seen as an expression of individuality, courage, bravery, an embodiment of victory over death, or as a sacred symbol of protection against evil. It has always been associated with the need for someone to fight their way through something difficult to get to a higher place. If you have experienced something near to death and felt reincarnated after that, you might consider getting a skull tattoo to symbolise that. Traditional skull tattoos are seen by many as a way to portray the darker aspects of the human soul and consciousness. By doing this, people can channel these things into their lives rather than letting them consume themselves. Choose from our range of traditional skull tattoos and you won’t repent.

Not all skulls are meant to be scary. Unlike the pale or discoloured, morbid skulls associated with horror, there is a certain type of skull that is meant to bring joy, remembrance, and happy memories. We’re talking about sugar skulls here. It originated from the Mexican culture, representing the Day of the Dead. In Mexico, families get together on this day to remember their loved ones who have left the mortal world. They make candy skulls in honour of the deceased and decorate them with colourful flowers, butterflies, and doodles. Irrespective of your cultural origins, you can get inked with this traditional skull tattoo displaying flowery patterns instead of just the raw bone structure. Sugar skulls reflect the colours of life and the afterlife. You can get a sugar skull tattoo to remember your loved ones. And you can always request your tattoo artist to put some vivid colours in your skull tattoo instead of going with the monochrome way.

An ancient symbol of rebellion and non-conformity, a traditional skull and crossbones tattoo will send a message loud and clear. Since ancient times, the skull and crossbones has been a sign of danger in many cultures. Although it was a popular symbol for pirates in the past, many biker groups have used this image to represent their toughness, ruggedness, fearlessness, and the fact that they are not afraid to get in fights.

Traditional Skull And Dagger Tattoo Wrapped By The Serpent

If you’re fascinated with symbolism and want your body art to be replete with it, you might consider having three unique elements clubbed together in one single tattoo. The serpent, the dagger, and the skull – each of them have their individual meanings that fall mostly on the negative side.

The serpent is a prominent symbol of temptation and evil. But that’s not its sole representation. The emblem of a snake can signify rebirth or transformation as well.

Daggers bear the symbol of betrayal and violence as well as the bravery and sacrifice of a person. The skull symbol is associated with death. When these three elements are merged, it not only makes quite a formidable tattoo but also opens several doors of interpretation. It may be symbolic of the wearer’s defeat against betrayal, temptation, and death. It can also denote that the wearer did actually fall prey to one such betrayal that nearly led them to death, and this tattoo acts as a reminder of that phase of life so that the same mistakes do not get repeated. This traditional skull tattoo is not for the timid and definitely lives up to its bold reputation through sheer size alone.

A traditional skull tattoo with a dagger can have certain negative implications, but when roses are added to it, the tattoo radiates a different meaning. The rose is an emblem of love and beauty. This particular tattoo depicts a rose and leaves growing around the skull after a dagger is run through it. This skull tattoo may symbolise a rejuvenated life full of love and good things after some dark phase.

Usually, a skull with wings tattoo would suggest that the wearer has inked it to honour someone close, who has died and is thought to have gone to heaven, among the angels. But instead of angel wings, when you ink bat wings, the meaning of your traditional skull tattoo changes. The symbols of death and reincarnation, bats are animals of the dark; they stand for the perception of things unseen by others. So, if you consider yourself to have greater prudence than most people, and if you’re a braveheart who isn’t threatened by the unpredictable nature of death, the skull with bat-wings tattoo is the perfect choice for you.

A crab spider is a symbol of longevity. And a red skull placed above it may signify long life, untouched by death. The piece of green leaf is symbolising life itself. If you wish to expand your lifetime, then you might consider getting this fiery red traditional skull tattoo for spiritual upliftment.

For centuries, Jolly Roger or the skull-and-crossbones flag has been attributed to pirates. It symbolises terror and pride. If you couple this with a swallow tattoo, it’s the perfect way to create an essence related to the sea, journeys, and the hurdles that come with it. Ask your tattoo artist to go creative with these skull tattoo designs.

If you want nothing more than a clean and subtle skull tattoo, then this blackwork tattoo would blow your mind. It’s a little different in its structure than the usual skull tattoos, which makes it rather stand out from the rest. This design is quite mellow compared to the generic scary and gothic skull designs. This traditional skull tattoo gives out a bold and loud message that the wearer harbours an undaunted spirit, and yet has space for a certain tenderness.

It is quite common for mythologies to feature the concept of death as a sentient character. The Grim Reaper is that very personified force of death in some mythologies. Although ominous, it signifies the inevitable circle of life, and that life and death is an inescapable phenomenon that will eventually happen to us all. The Grim Reaper skull tattoo symbolises that the wearer is realistic enough to understand and accept this natural order, and is not afraid to meet his fate.

The idea of a skull tattoo is compelling, a reminder of our mortality. Whether you’re looking for a classic style, a colourful, abstract motif, or wanting to create a “bad boy” personality, there’s a skull tattoo design for everyone. Skulls can be portrayed in various ways. A skull may be completely realistic in appearance, or it can be cartoonish and humorous. Apart from these ten skull tattoo designs, there are many other cool tattoo illustrations under different categories that you can explore:

What is the meaning of a traditional skull tattoo?

A traditional skull tattoo usually symbolizes mortality, death, and the fragility of life. It also has a deeper meaning of using death as a reminder to live life to its fullest and make the most out of every moment. Skull tattoos are often used as a sign of protection from harm and bad luck. These bold symbols have been popular for centuries and are still seen as a popular tattoo choice today.

What are the origins of the traditional skull tattoo?

The traditional skull tattoo has its origins in the early 18th century when it was used by sailors and soldiers to remind them of their mortality should they face danger or death. This tattoo was then adopted by the public, becoming an icon for those who chose to live a life of adventure, courage and risk-taking. It is also associated with the idea of “memento mori” which is Latin for “remember that you will die.” This phrase was used to remind people to make the most out of life and not take it for granted. Today, a traditional skull tattoo can symbolize strength, courage, and the power to overcome obstacles in life.

How do I choose a traditional skull tattoo design?

When choosing a traditional skull tattoo design, it is important to think about the meaning you want to convey with your tattoo. Consider the symbolism of each element and how they fit into your overall vision for your tattoo. If you are looking for something more unique or abstract, consider incorporating other elements such as roses, hourglasses, banners or wings. It is also important to choose an experienced and skilled tattoo artist who can bring your design to life. Finally, make sure whatever design you choose is something that resonates with you and reflects your values and beliefs.

What are some of the most popular traditional skull tattoo designs?

Some of the most popular traditional skull tattoo designs include a simple black-and-white design, an intricately detailed sugar skull, and a more abstract version featuring flowers, banners or other elements. Other popular options include a pirate-style tattoo with a Jolly Roger flag, crossed swords, and a banner that reads “Abandon all hope ye who enter here”; a burning skull, which symbolizes the power of life and death; and a day-of-the-dead style tattoo which usually features brightly colored flowers, skulls, and other decorations. Whatever design you choose, make sure it conveys your personal meaning to you.