10 Best Traditional Ship Tattoo Ideas You Have To See To Believe! 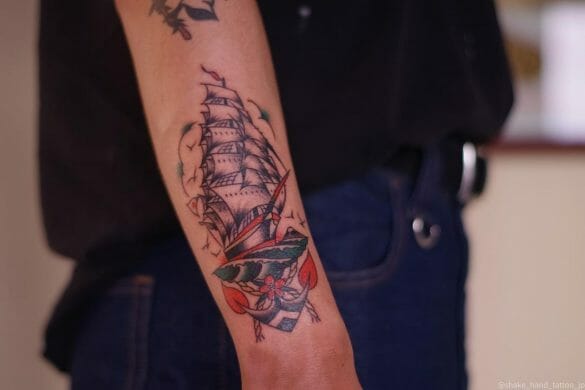 People who love to go on adventures in the sea would surely be fans of ships and voyages.

Traditional ship tattoos symbolize good luck, new beginnings, and journeys through unique designs. Clipper ship tattoos of Sailor Jerry represent and shows the meaning of determination to be a ‘homeward bound’ and invoke a call to adventure in people.

Traditional tattoos are often called old-school tattoo styles. By getting these traditional style tattoos, you honor the ancient history of the artwork by getting a piece of that robust representative design or symbols in your body. The traditional Japanese tattooing is called Tebori, while it is known as Pacha kuthal in South India, particularly in Kerala. It takes nearly 4-6 hours to complete the tattooing process of traditional ship tattoos. Let’s explore some stunning ship tattoo designs to steer you in the right direction.

Ship Tattoos Under The Red Sky

This traditional tattoo of billowing sails represents images from many cultures. Japanese tattoo masters use these designs often to show the style of freedom and the long history of their culture. Navy style mainstream design of the traditional ship tattoo black and grey has images of flowers at the ship wheels. The most common meanings that the images of these many ship tattoos try to show is of the old pirates’ nature of fighting. Many symbolic purposes are meant through these nautical tattoos and sailor jerry and pirate ghost ship tattoos. These old school tattoos use images of pirates and sailors’ ships to bring out a symbol style meaning to these old school tattoo designs. Also, a re d lotus flower is drawn at the end of the ship vessel area. Lotus or lily-like flower is one of the holy spiritual flowers used in India, China, Vietnam, etc. These nautical tattoos are traditionally worn by people who relate with these cultures or are sailors themselves!

Pirate Ship Tattoo And The Kraken

A dope monster tattoo that brings out chills through your arms. This traditional ship tattoo with a sailor jerry is a creative twist. These tattoo designs show a green monster with huge, orange eyes and long tentacles grabbing the sailing ship in the deep dark regions of the ocean. The sailing ship with a bit of the sea is given a dark grey color. And the green monster and its orange eyes and tentacle parts highlight the traditional pirate ship tattoo design on the arms. You can also get these pirate ship tattoos anywhere in your body, like legs, back, and shoulders. Two red flags are shown in this pirate vessel ship. This decorative body art has become more popularized tattoos than swallow tattoos. The idea of these sailor jerry pirate ship tattoos comes from various symbols and sailing stories like the old man and the sea, etc.

American traditional ship tattoo is made with a considerable navy style body of the ship and a rose made as a pin at the bottom of the ship tattoo. The whole tattoo is in black and red. The American traditional tattoo ship is shown as sailing through the sea or ocean with birds flying nearby and considerable clouds in the background. Also, rays of lines are created in the ship tattoo design to show the ship’s greatness. A tiny bit of red coloring is also given to the background of the ship. The bottom pin rose is bright and bold red. Four leaves are drawn as an extension from the rose holding the ship tattoo above it. The overall tattoo symbols the meaning of boldness and confidence. The red color boosts energy and belief, and the rose represents the bright and bold feel of the voyage.

This traditional tattoo of a pirate ship is given a background of setting sun into the sea or the ocean. With five layers of height, a red flag is seen at the top of the ship tattoo. These ship tattoos have birds flying at both sides of the ship. This navy-style ship tattoo is shown as sailing through the vast ocean with the tides marking its world of water. Like palm trees, these tattoos are of high lengths. A small tattoo design of the same can be done as a heart tattoo. These traditional American tattoos of the sailor jerry show the essence of tattoo culture. Common meanings of good luck are demonstrated through this old-school traditional tattoo. Such a classic American style of a sailing ship or anchor tattoos are now getting popularity among voyage-loving people. This traditional navy ship old-school tattoos provide a sense of the sea world and ships.

A clipper ship is a merchant sailing ship that come about in the 19th century. The blue sea with vintage shaded ships is given a frame of red sky clouds and a floral rose design. The tattoos of ships with a floral border design make it more presentable. For most vintage ships’ tattoos, a red rose is drawn at the bottom of the ship’s tattoos. The sailor jerry ships are given brownish color and grey color with an articulation of golden. Most sailor jerry ships have red or green flags at the top mastiff. The designs of green-yellow shaded leaves have accompanied the red rose. And the side floral design or pattern given to the ship tattoos are of black color leaves pattern. This tattoo looks wonderful placed on the biceps.

The Kraken featured here looks like an artistic and scary monster. The sailor jerry ships are perfectly done and given the right colors with a red flag at the top. A curly cloud pattern has been drawn in this ship tattoo design. Also, a vast moon of silver color is included as a background to the ship in these tattoos. The highlight of this tattoo is the snake monster. This snake monster with long more than one tail in the green waters captures the sailor jerry ship in the seas. A scary but simple face is given for the snake monster in these ship tattoos. A color mix-up of brown, orange, yellow, and red-maroon is used for the beast. The white colour of the ship’s sails and clouds contrast with the kraken quite well. You can get this tattoo on your arms, legs, thighs, or even on your chest.

Ship Tattoo In A Skull

Pirate ships in these tattoos are scribbled in the outline of a skull. These tattoos are often famous as pirate skull tattoos. You can spot pirate ships in the sea with pirate flag on it, as shown in the image here. A sunset setting is given for this skull tattoo of the pirate ship. This traditional ship tattoo has a lightning pattern in the skull outline of the tattoo. The dark grey clouds and dark grey sea shows the solemn dark atmosphere in these pirate ship tattoos. Along with the yellow flag at the ship mastiff, a white flag is also held at the front of the pirate ship in the tattoo. You can get this tattoo on your legs, arms, back, chest, etc.

This black and white traditional ship tattoo is inked neatly and placed on the throat. The big clouds behind the big ship, the crows flying near the ship, and the setting sun in the sea are scenes that we always imagine with the colors, even if it is a black and white picture. In a simple black outline, this tattoo features many nautical elements with minimal design. If you are looking for a bolder design, you may choose to add colours to this simple ship tattoo. However, do keep in mind that the throat is a sensitive area and it is tricky to get an accurate design on this area. These black and white traditional ship tattoos would look great on your shoulders, as well.

This traditional ship tattoo is a colorful treat to the eyes and the body. The design and layout are perfectly done with apt colors in this tattoo. Also, the ferocious unsteady nature of the sea is shown through the blue waves through which the ship is sailing in this tattoo. Above the sailing ship, are hints of a cloudy sky and birds soaring alongside it. This tattoo would absolutely stunning placed on your arms or shoulder.

If you are looking for more examples of traditional ship tattoos, check these out.