10 Best Traditional Owl Tattoo Ideas You Have To See To Believe! 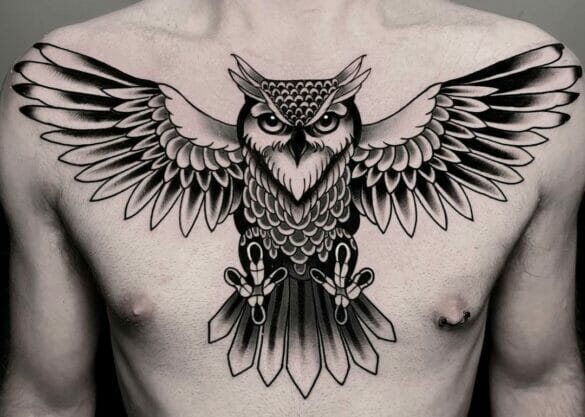 Planning for a new owl tattoo but want it to be traditional and meaningful? Here is the chosen list of eye-catching traditional owl tattoo ideas just for you!

Owls in general have a lot of mythological significance all around the world.

Few cultures believe owls to be a symbol of positivity like the Mongolians believe owls as creatures that stand for kindness, something gentle and mild. Japanese culture regards an owl to be a lucky charm, modern western culture depicts owls as the carriers of wisdom and vigilance, and a couple of Native American tribes like the Pawnee tribes and the Yakama tribes relate owls to protection and also as a totem of guidance.

But there are many cultures believing owls to be negative creatures and a few with both positive and negative beliefs. Africans till this day believe seeing owls lead to a person’s death. Most of the Native Americans like the Apache, Seminole, Aztecs, the Mayas, Hopi, Ojibwe, and the Puebloan people associate owls with death, destruction, danger, and evil powers. The Hindu culture represents the owl as a token of wealth, wisdom, prosperity, good fortune, and good luck and also as a messenger of death.

Now many people would wonder what does an owl tattoo mean? A traditional owl tattoo meaning differs based on the variation of the tattoo or even the owl species you are selecting. On a positive note, the tattoo can be a symbol of hope or something radiant in pitch darkness, wisdom, mystery, and something magical. The negative side of owl tattoos is usually derived from various cultures which include evil powers, bad luck, and even death. Here is the ultimate list of traditional owl tattoos.

Neo-traditional owl tattoo is made by keeping in mind that the purity of the old school owl tattoo design is made visible but with a modern effect. The awesome modern effect is brought by giving the tattoo a kind of natural look with a wider colour range so this is absolutely not for the people who love black tattoos. This tattoo is exclusively meant for the people with cool and badass attitudes who love to show off. The tattoo should be made taking care of the maximum precision over the lines and absolutely do make sure a range of vibrant and contrasting colours are used for the shading. This tattoo will not look good if made very small or very big. So it is meant to be a medium-sized tattoo. The tattoo is best suited for your upper arm but might also look fabulous on your back.

Owl head tattoos are one of the most loved in the world and so it is a classic tattoo. Although owl head tattoos can be made in various styles traditional tattoo lovers should always go for bold black ink lines with a traditionally limited colour palette. This tattoo has been made with simple straightforward strokes and prominent colour shading. So this tattoo looks simple but pretty cool. People most of the time tend to go for owl tattoos which show the full body of the owls, so owl head tattoos always look unique. This tattoo is best for anyone who is getting their very first tattoo, or those who want a small owl tattoo with big eyes and meanings attached to it, or someone who wants the half-sleeve tattoo to be complete. This type of tattoo is small in size and can be tattooed on most areas of your body.

An owl tattoo always has a few elements that should always be taken care of like the perfectly shaped scary large eyes. And the various other elements would be the proper colour coordination and the different backgrounds used other than the owl. Since owls are mostly considered to be a symbol of dead or departed souls so anyone who wants to honour a loved one can get this tattoo design done. This tattoo consists of a perfectly simple and scary traditional owl tattoo design made with bold black outlines and coordinated colour shades accompanied by a skull and flowers. This can be made in varied sizes and will look visually striking on your forearm, thighs, or on the side of your stomach. If needed you can get this tattoo done to complete a part of your half sleeve tattoo.

This is also a massive chest tattoo and probably might look good on your back. This tattoo shows a flying owl with a skull being ripped off. Since an owl is considered to be a bad omen and a connection to the dead world in different cultures all around the earth, people like to get owl tattoos with surrounding elements like a skull tattoo and sometimes even a graveyard. This tattoo is a difficult piece of art. In this tattoo, every single line and shade should be highly detailed. The choice of colour should also be very simple but perfectly matching and beautiful. This owl traditional tattoo does perfect justice to the concept of neo-traditional tattoos by maintaining a proper realistic look, awesome colour selection and shading, and the most important of all maintaining the owl symbolism or owl meaning.

Anyone looking for a cute owl tattoo design? Then this is what you have been looking for all this time. This is a classic barn owl tattoo made with impressive precise strokes. Although there are only a few colours used in the tattoo the colours which have been selected are subtle and at the same time just perfect for this owl tattoo design. The tattoo has been made to look lively. The owl’s eyes in this tattoo have to be made with ultimate clarity because that is the most important feature for liveliness. The colours have blended with each other so well that the entire tattoo just looks smooth and unreal. Barn owl tattoos can be made in a multitude of variations this being the cutest. Owls do have multiple meanings attached but this cute tattoo will always bring in all positive vibes in your life. The tattoo is best suited on your forearm or your upper arm but can also turn out to be good on your thighs.

Harry Potter as a movie and as a single character has numerous fans all around the world. All Harry Potter fans do know that Hedwig portrays a very important role in the movie series. There are tons of people who want cool ideas for a cute snowy owl tattoo or a one owl tattoo with night sky and moon in the background. I would say what better than a Hedwig owl tattoo with the background showing the Hogwarts school blended in with some clouds and if needed, a moon giving the nighttime effect. Anyone who wants an owl tattoo on their body as a symbol of mystery there could be nothing better than this tattoo. The entire tattoo is reflecting major mysterious vibes. The tattoo is a big and extremely difficult piece of art all made using black ink. The tattoo artist clearly needs to be experienced to make the perfect and precise lines and shades. This tattoo will cover a lot of skin, hence it is better tattooed on your back or on the side covering your lower torso, hips, and thighs.

There are owl tattoo designs like this one in particular which are just meant to be made using radiant colours so it could just pop out as a spectacular art piece. This owl tattoo is a perfect combination of a neo-traditional tattoo and a modern artistic tattoo. So anyone looking for bright, colourful, and radiant owl tattoo ideas with large eyes or any birds tattoo here is the one you should select because this owl tattoo design will do ultimate justice to your body and money. The body and feathers of the owl have been made with seriously precise lines and strokes and the gazing eye, in simple words, is just dreamy. The selection of background colours has to be done thoughtfully and creatively because that is what gives this owl tattoo prominence and life. This owl tattoo design is something everyone should be able to see so will be the best on your forearm or your upper arm.

Owl in specific is considered to be a very mysterious animal and also does symbolize the same. An owl tattoo design if made in a mysterious look needs to be dark and scary. But this owl tattoo design has been thought creatively. The owl has been made in a traditional method with bold black outlines and using only necessary colours. The artist has given the owl a detective look with a hat and a monocle. So anyone looking for ideas of the traditional owl designs or any sort of birds tattoo designs that have attached meanings and a creative comic look and is absolutely not dark and scary in nature, this would be the perfect option. This tattoo also looks the best on your forearm or upper arm but will not look terrible on your thighs or your chest. This owl tattoo design can also be used to complete an empty spot in your half sleeve or full sleeve tattoo.

Owls have been used as symbols for a long time and do have multiple meanings attached, one of them being wisdom. On the other hand, the all-seeing eye is considered to be the eye of god and is a symbol that means protection, awakening, and much more. So people who want precise and beautiful customized owl tattoo designs with a divine and positive meaning this is just for you. This owl tattoo design is best suited for your forearm but will also look good on your upper arm and your back.

As we all know now that owl as a tattoo is something that has many different meanings attached and always looks bright, good, and eye-catching. For this very reason, there has been a visible increase in the popularity of different variations of owl tattoos. So here are a few more owl tattoo ideas just for you.