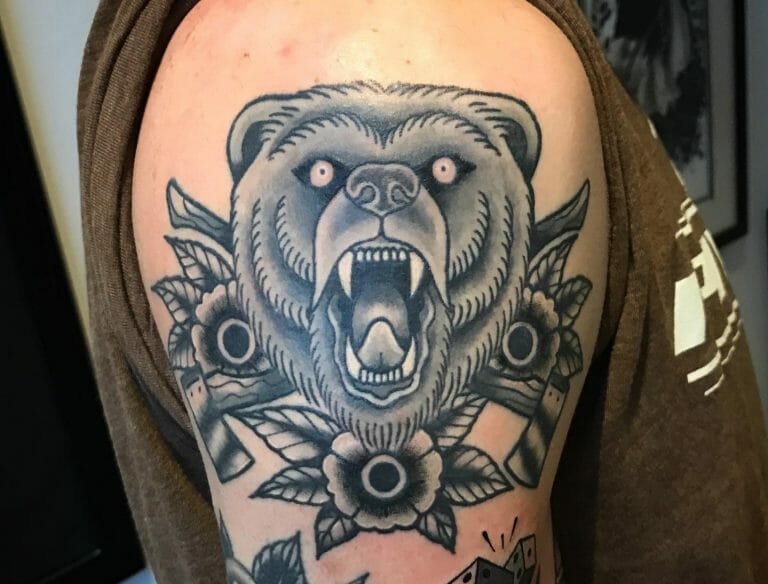 Bears are ferocious animals that live in the wild and can be very dangerous if you happen to encounter one.

Traditional tattoos generally have bold designs and bright colors. The wide and pointed teeth of a bear and its thick fur make for some amazing traditional tattoos. The contrast in their colors can be really striking. These tattoos are definitely cool, but apart from that, they also hold deep meanings behind it. Especially in the area of traditional art designs, tattoos of wild bears hold great symbolism. According to some ancient cultures, people considered bears to be a connection to the spiritual world, and they symbolize strength, healing, ferociousness, and bravery. The people of Sioux believed that there used to be a bear who wandered the Earth and taught people about the arts of healing. According to Norse Mythology, Odin, the God of healing, battle, death, knowledge, death, and sorcery was accompanied by a bear when he wandered the Earth. Bears can be seen as wise animals but they are also warriors who are ferocious. Traditional bear tattoos can be great for your next body art.

A neo-traditional tattoo is a different style of body art. It looks awsome because it usually has bold lines and modern colors. It sometimes also has a 3D effect with a look that is very illustrative.

This particular tattoo is made on the back of the arm of the wearer. The bear looks ferocious as though it was roaring. This outline of this tattoo is made from thin strokes of black ink. The eyes are bright yellow in color and the teeth is pointed and wide to make it look realistic. The fur of the bear is brown with shades of black. There is a rope that is around the mouth, trying to restrict the bear. The interpretation of this tattoo could vary from one person to another.

Ferocious Roar Of A Bear

Bears are species that are sometimes predicted as wisdomous sages. They are also seen as warriors who have qualities of protection, care about their people, have powerful characteristics, and have strength.

This kind of traditional tattoo gets a lot of meaning when bold colors are used to fill it. The thick fur of the bear is brown and red. The eyes of the bear are yellow and blue to show the ferociousness. The mouth is wide open like the bear is roaring at its prey. if you look carefully, there are some blood splatter marks made on the right of the bear to give the vibe that it is ready to attack its prey.

Traditional artwork has gained a lot of popularity over the years. A lot of people like to get traditional animal tattoos in the form of body art. Among these tattoos, the bear tattoo is the most popular one.

This traditional bear tattoo is made with thick black strokes of black. The eyes of the bear are red to show anger. The teeth are pointy and the bear is roaring. The fur of the bear is made with black and red ink. This tattoo is situated on the back of the arm of the wearer, but this tattoo will look perfect anywhere on the body. It looks great as a chest tattoo or a back tattoo as well!

Many people consider the bear to be their spirit animal. They are considered to have wisdom and when ferocious, they instill fear in their enemies. This tattoo is common for men and women alike when they want to show that they can be wise and ferocious or they want to be the one to protect their family.

This tattoo has a little fun side to it. The tattoo is of a black bear which is considered the most dangerous of them all. The mouth of the bear is open as if it were roaring. The eyes are yellow and blue. The fun elements of the tattoo are a cap on the head and a gold chain around the neck. They tried to give a rapper-like look to the bear. The interpretation of this tattoo can vary according to different people.

The most common design among bear tattoos is the face of the bear making it look like it is roaring. These tattoos look ferocious and bold, but they also mean something deep. Roaring bears are a symbol of strength, tenacity, and courage. There are many cultures that believe that bears are docile creatures and are often connected to a teddy bear whose love for honey makes it even more lovable. However, the most common belief about bears, in general, is that they are a symbol of dignity and power and will do anything to keep their family, especially their cubs safe from any harm.

According to pictures of this tattoo, the bear that is drawn appears to be a black bear. They are considered extremely dangerous. This tattoo is made on the back of the leg. The mouth of the bear is open and the yellow eyes make the bear look ferocious. The tattoo is made with thick and thin strokes of black ink. It is colored black, red, white and yellow.

A bear is often seen as a spiritual symbol among people. According to the culture of Native America, the bear symbolizes power. These tattoos are generally worn by people who think they have a deep connection with animals or want to show off their animalistic side. In the tribal culture, the tattoo of a bear paw is also considered a symbol of protection.

Legend has it that a mama bear just like any other mother will do anything to protect her cubs from harm. Any human or other animal comes comes near a bear cub, the mama bear will jump to save her baby. This kind of characteristics makes the tattoo design a symbolism of protection.

A bear tattoo design is very common among people who think bear is their spirit animal.

This tattoo has been given a fun touch to it. This tattoo is of a circus bear. A circus bear is considered to be a fun loving animal who makes up words of his own and has a big heart of gold. He understands that his friends are like family and he likes to entertain them all. This tattoo design is made with thick and thin strokes of black ink. There are different shades of black, brown, yellow, and red. This tattoo is made on the back of the person, but it would look great as a chest tattoo, arm tattoo, and leg tattoo as well.

This particular design is made with thick and thin strokes of black ink. There are hues of black, white, yellow, red, and orange.

A ferocious bear is like a symbol of power and security.

This tattoo is made on the side of the hip of the person. It is of a black bear that two arrows going through it. It is not clear whether the bear is roaring in agony or is being ferocious. This tattoo could have a different interpretation for every person. The colors of this tattoo are in a contrast, with colors like black and yellow on the face of the bear. To give a more realistic effect, the tattoo artist has made splatters of blood around it. An amazing design for your next tattoo!