10 Best Totem Pole Tattoo Ideas You Have to See to Believe! 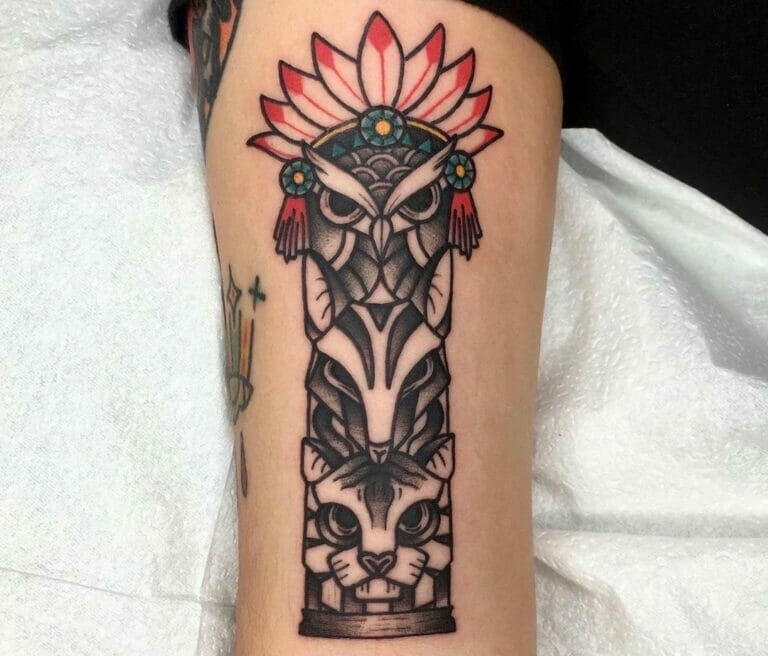 If you are looking for ideas on your next tattoo, here are some brilliant totem pole tattoo designs handpicked for you to check out.

Totem poles are monumental carvings on poles usually found in native American culture consisting of symbols considered sacred to Native Americans and their different tribes, like animals and other interesting creatures, food and other visuals related to the tribal tradition.

Totem pole tattoo meaning hence ranges from being rooted in tradition to exploring tradition in modern styles and mixing it with a totem pole design. In addition, the different visuals and images inscribed in the totem poles depict different images of family pride, significant obituary for ancestors and of course, the idea of prehistoric worship.

Most totem pole tattoos and designs have crest animals like eagle, owl, bear, wolf and other animals or powerful beings as the “totem” of certain tribes or families. Many heritage totem pole tattoos also seek to create an amazing return to traditions of nature and explore the process of loyalty in the challenging game of the survival of the fittest in many tribal communities. We have some totally cool totem pole design ideas to choose from.

This totem pole tattoo is a pretty cool fashion statement to opt for a bold and loud tattoo idea. This can be inked as a totem pole leg tattoo. It includes, as images, the eagle with its wings spread out and the growling black bear, both depicted as maleficent and ready to attack. The eagle in totem poles stands for the meaning of power, prestige and strength. The bear is always found on the base of totem poles and represents the detailed health of the family, needs of the body and vitality. In addition to the animals, it has a seemingly disjoint bunch of hands and legs but without any body shape or form to be attached to.

Coloured with bold, deep red and black ink, the artist has really sealed the body art with amazing needlework, not to mention the detailed elements in the facial expressions of the eagle and the bear. Red ink was interestingly also one of the first inks to be used since prehistoric times and represents war, fear, anger as well as love and joy when used in different life contexts. This awesome totem pole tattoo almost brings the wooden pole back to life.

Often spiritual tattoo ideas or the designs of totem pole drawing are supposed to be dark and teach the truth about meanings represented in the poles and indulge in a sense of the crude traditional return to muscle power and war. However, this colourfully elegant totem pole tattoo inspired by different totem pole tattoo drawings is here to prove the opposite. This tattoo features the owl with its brightly coloured wings wide open and the fish trying to eat up the animals along with other minion-like beings at the base of the totem pole tattoo. The owl usually is a symbol of security, protection and enjoyable wisdom in life, while the fish connects the zeal to discover things in life to the significant heritage of the subconscious and human knowledge.

The colourful designs and the detailing in deep and light pink, blue, red and white and black inks for shading are impressive. The artist creates a sense of fun along with being bold in moving away from the traditional totem pole tattoos in native American culture. We are as interested as you are! This tattoo would surely be an attention-grabber for your friends.

Many a time, totem poles in Native American culture make use of the animal motif and use the animal’s strengths as an example to represent the tribe itself. This uniquely cool tattoo can, however, not be traditionally called a “totem” per se, but nevertheless, through this tattoo, the artist has created a mixture of modernity along with a traditional worship method. This totem pole tattoo includes the faces of three animals and a human skull on top, forming a “pole” shape. The base of the totem is the elephant with an awesome tribal design on its face and ears. Elephants are often examples of elements of production, fertility and courage. Prehistoric people chose to draw elephants on their cave walls to commemorate the animal. The next is the leopard, with its black spots intricately inked, and eyes coloured in pale yellow- an ideal symbol of strength, elusiveness and cunning. Next is the chimpanzee, and lastly we have the human-animal and its head; the human skull with the brain sits on the top with veins spreading out like the roots of a tree.

This totem pole tattoo also successfully depicts the food chain of biological beings in an awesome way. What is more precise a way to describe the ascent in the survival-of-the-fittest ladder than this? We recommend you create this look in colour with a little bit of research here and there on photos of totem pole designs, instead of the usual bit of black and white.

Totem pole tattoos like these deserve all the likes. This totem pole tattoo is often represented as the totem of native Americans, but it is inked here in bright colours. However colourful it is, the indigenous and traditional roots of the totem are maintained here. We have here a mouse at the base, followed by a horse, a cat and an eagle at the top of the totem pole. Our search tells us horses usually act as a totem animal for finding the courage when you are intimidated to do something and complete it. Mice as totem animals are pretty rare, and folks say that a mouse, as a spirit animal, represents the search for peace and innocence as well as attention to great detail in life. The journey from the mouse to the eagle and hence the journey from looking at things from the ground to the aerial view is explicitly visible in this design. The deep, bright colours are, however, the ultimate show-stealer.

Given a matte touch and muddy vibe, the totem pole tattoo looks like it has been created by a potter. If inked carefully, the symbolic design in such totem pole tattoos almost provides a site for heritage exploration about the tribe or its culture.

Totem pole tattoos inked on the entire arm, otherwise called sleeve tattoos, are extremely in vogue nowadays. This tattoo, for example, can be flaunted while you are humming away casually on your guitar. Featuring three humanoid beings, but demonized in form and shape, these totem pole tattoos are unique because of their size. These are often called totem masks that were carved onto the poles and are now widely inked in the form of pole tattoos. Totem masks often work equally in both empowering the tribe as well as hiding their faces and giving protection in war. Most totem masks allude mainly to animals, birds and human figures and are vastly detailed, decorated, coloured and heavily inscribed onto the totem poles. The detailing of black and grey ink on the skin gives a shaded effect on the demonized human forms and the elements of fear they represent. The design is traditional and yet contemporary in style.

One of the biggest takeaways of this extremely traditional totem pole tattoo is its native American headdress at the top, along with the native horn kept aligned at the bottom. These totem pole tattoos and this unique design truly captures the entire ethos of native American cultures by adding elegant headdresses and the native horn used as a signal for war or to ward off predators by the tribes. Richly detailed grey and black inkwork in this design surely steal the show. Many tribal communities use native headdresses to showcase their power and honour. Eagle feathers, again a representative of the animal’s vigour, are used to decorate these headdresses, and hence the totem pole tattoos would incorporate these ideals as well. It also features the owl along with detailed totem masks, an entirely traditional approach to the idea of totems.

This tattoo design happens to be one of our most loved sleeves: it is an interesting take on the idea of totem tattoos represented only by animals and birds like the eagle, wolf and shark. All three are symbols of strength, vigour and crude force. Interestingly the three animals cover the three spaces of the earth: the sky, land and ocean and reign these spaces. This mixture is truly tribal symbolism induced with modern symbolism to create a brand new vertical totem design.

With yet another totem pole design with wild animals, this tattoo features the deer, wolf and bear. Inked with black ink and grey fill, this awesome design also seems to indicate the natural food chain of the jungle. However, the natural prey is placed at the top and the predators below. It is mainly a representation of the individual animal’s strengths and power that dominates over the other animals. The shading of the fur on all the three animals by the artist is extremely commendable and surely bound to be an attention-grabber.

This massive tattoo is inked through the entire circumference of the arm, and is as loud and bold a fashion statement as any design can be! The rich fill and the appropriate shading of grey and blueish black, featuring the elephant, wolf, tiger, lion and the owl create a fantastic collection of beasts representing crude strength, power, and the classic prey and predator relationship. These tattoos often seem like a part of some cult in featuring the human’s physical powers through an animal’s physical powers.

Finally, among all coloured tattoos, this one steals the attention. A vertical totem pole design featuring the owl, wolf and tiger yet again; this tattoo differs from the others in respect to its neat geometric shape and design. Not only this, there is a complete feeling of a wooden texture present inside the beasts’ facial expressions that seem like a realistic wood inscription totem pole has been inked on the hand. Additionally, it also features a headdress inked in deep, bright red with ornamented jewellery embracing both sides of the owl. The grey fill, once again, in these tattoos, is ideal for flaunting.

The totem pole tattoos act as an awesome display of power and pride the family held in the past, and they also happen to hold crude rationality and muscle power with a mix of modernity rooted in traditions. With a myriad of new totem pole tattoos and design ideas to choose from, we have you covered for the best ones at hand.

Here are some more tattoo suggestions not on the list, you could try out: