101 Best Tokyo Revengers Tattoo Ideas That Will Blow Your Mind! 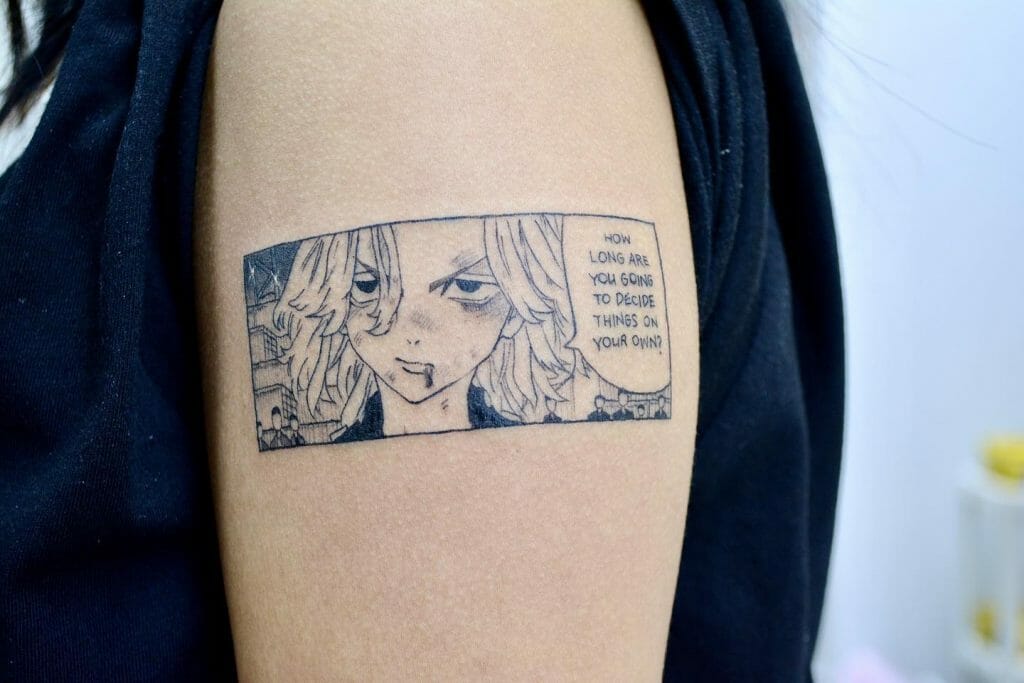 Are you an anime fan? If yes, then do not miss out on these amazing and unique ideas for your next Tokyo Revenger tattoo.

Written by the infamous manga artist, Ken Wakui, Tokyo Revengers is a Japanese manga series that was released in the year 2017.

The storyline of Tokyo Revengers manga revolves around the adventures of some of the biggest gangs of Tokyo. One interesting fact to note here is that almost every gang that is featured in Tokyo Revengers, has a unique tattoo that represents their ideals and attributes.

Within just months of its release, Tokyo Revengers became a well-known name among manga readers as well as anime lovers. One of the main reasons behind this is the unique representation of the various characters in this show. Almost every character in Tokyo Revengers has a tattoo that not only looks cool but also provides deeper meanings about their character. A very common example to substantiate this claim would be the cool dragon that we can see on Mikey Kun. Just like a dragon that represents wisdom and strength, Mikey Kun is also known for these characteristics of his personality. Here are some more examples of Tokyo Revengers tattoos that you can use as an inspiration for your next tattoo.

Remember Chifuyu from Tokyo Revengers? He is known for his utmost loyalty toward his friends, and his logical attitude. If you are a person, who adheres to these above-mentioned qualities, then you should try this one out. The artist of this particular design has created the side look of this unique character from Tokyo Revengers. It looks both cool and chic and is a must-have for all Chifuyu lovers.

Kazutora is one of the dark characters of Tokyo Revengers. Apart from a violent and sadistic personality, Kazutora is also known for the distinctive tiger tattoo that is engraved on his neck. There are various interpretations of this tattoo. While some believe that the tiger is a representation of the strength, and fearlessness of Kazutora, others think that it is a representation of his name. Kazutora translates into ‘one tiger’. This bold tattoo of this character has inspired many tattoo lovers, to replicate a similar one on their bodies. One such example is in the above-mentioned image. The artist has so intricately used pure black ink to create this design on the body of the person. Although in the manga series, the tattoo extends from the neck, up to the chest of Kazutora, in this design, the artist has chosen a smaller version of the same.

The tattoo on their neck of Mikey is Draken’s tattoo, one of the other characters of this anime, with whom, Mikey shares a very close bond. As a mark of their friendship, Mikey got this tattoo in the Bonten timeline. Draken was one of the most intimidating characters of Tokyo Revengers, and also a core member of the famous Japan Manji gang. In this picture, the artist has recreated the same design on the neck of the individual. It is a very unique representation of strength and wisdom. If you are a fan of such qualities, then definitely use this one as a recommendation for your next tattoo design. Some of the most daring places to get these types of tattoos include the chest or even the throat.

Hinata Tachibana features as their girlfriend of Hanagaki in this anime show. She is known for her bubbly and optimistic personality. She is the kind of friend, who always tries to cheer you up when you are feeling low, and motivates you at every stage of your life.

The tattoo artist in this particular design has created a very cute and adorable replica of her face. If you look closely, then you can see how he has used mild orange color to highlight his beautiful eyes of Hinata. Furthermore, he has used white ink, to add that sparkle to her eyes. You can try out such similar designs for your next Tokyo Revengers tattoo.

Sanzu is one of the most badass characters of this anime. He is known for his ruthless form, and some fans even describe him as a psychopath. For those, who are looking for some dark characters to include in their next tattoo design, this can be a great idea. The true wickedness of this character is reflected well in this picture. Needless to say, the artist has done an incredible job. Just by using black and orange ink, he has been able to create this beautiful design on the arm of this individual. Some of the best places to get these tattoos to include the shoulder, neck, and arm.

Mikey is one of the most fun-loving characters in this anime show. He is extremely loyal and can go up to great lengths to ensure protection for his friends. The same emotion has been reflected in the design of this particular tattoo that is imprinted on the arm of this individual. If you are among those, who has a quirky and fun personality, then go for this one. The different shades of black ink used to highlight his hair and shirt are marvelous. You can also personalize this design by adding colors of your choice or changing the size of this tattoo.

For those, who love the character of Mitsuya, this one right here is a must-have. The personality of Takashi Mitsuya is described to be that of an idealist. Despite all the obstacles, that he has faced in his childhood, he is very optimistic as a person, and always tries to generate positivity wherever he goes. If you are looking for some motivational designs for your next tattoo, you can take this one as a recommendation.

The artist here has mainly used black ink to deliver this design and used white color to highlight the outline of some of the body features of this character, like his hand. It is a very unique design and will surely look great on both men and women alike.

How can one forget Baji and his iconic grin from Tokyo Revengers? He is one of the most interesting characters in this anime and is known for his wild personality. He is always looking for adventure, even if it means that he has to engage in fighting with random people on the street. If you love this character, then you should get this design done on your shoulder or arm. The long hair and the grin, two of the characteristics for which Baji is known, have been accurately depicted through this design. You can also go for a smaller shape if you like, but ensure that you go to an experienced artist for your design to avoid any kind of goof-ups.

If you are one of those who loves to read manga, instead of watching an anime, then this design right here is the perfect one for you. The design here is a scene that has been taken from the original manga of Tokyo Revengers, featuring Mikey and one of his iconic dialogues. These kinds of artwork require a lot of time and patience and are not at all easy to make. Irrespective of all these struggles, the artist has been able to deliver the perfect replica of the scene. If you have any such favorite scenes, you can also go for similar designs. However, make sure that you go to the right artist with proper experience and knowledge, of these kinds of body arts.

If you have seen the anime, or even read the manga, then you know who I am talking about. Takemichi Hanagaki is none other than the main protagonist of this particular show. He is one of the most beloved characters in this anime. You need to get this one done if you love this anime. The design in the above picture is indeed marvelous. The artist has chosen a ravishing shade of red, to mark the blood on the character. Furthermore, the use of strokes to mark the fine lines of his hair is brilliant. The mixture of red and black colors was indeed a bold choice, and the artist has successfully managed to pull off this piece. If you are looking for large-sized tattoos, you should consider this for your next tattoo design.

There are several other unique personalities in this show, that have been an inspiration for many tattoo lovers. One of them might include, Hanma and his infamous hand tattoo. The two kanji tattoos on the left and right hands of Hanma depict two meanings, sin and punishment. There are such similar deep meanings in tattoos in this show. Given below are a few other suggestions for your next tattoo.

What does the Tokyo Revengers tattoo mean?

The Tokyo Revengers tattoo is a symbol of the group’s bond and loyalty to one another. It also represents their shared goal of vengeance against those who wronged them in the past.

Who designed the Tokyo Revengers tattoo?

The Tokyo Revengers tattoo was designed by the group’s leader, Takemichi Hanagaki.

How much does the Tokyo Revengers tattoo cost?