10 Best Thunderbird Tattoo Ideas You Have To See To Believe! 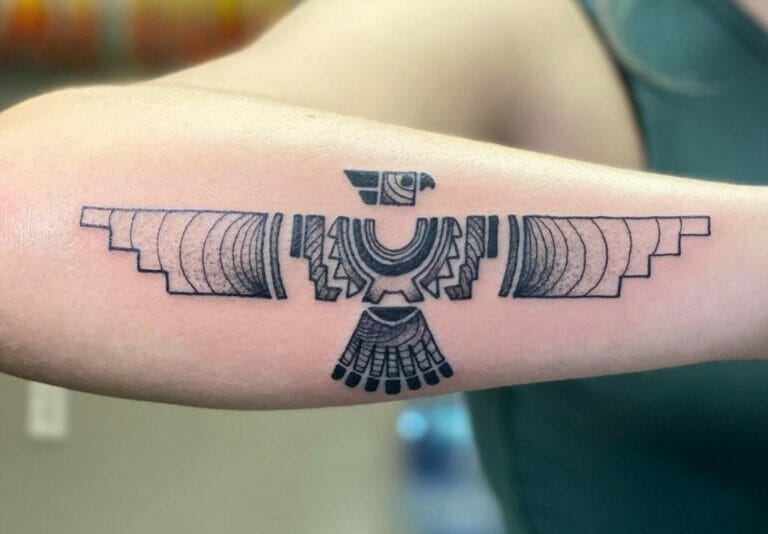 If you’re looking to pay respect to the native American culture and want to get a native thunderbird tattoo, this list would be perfect for you.

Native Americans have struggled long and hard to make an impact on the world and eventually the thunderbird, the mythical creature meant to create thunder by just flapping its wings, was chosen as a native American symbol to represent power, divinity, strength, and might.

If you’re still left wondering what does a thunderbird tattoo mean, or the philosophical thunderbird meaning, then the main thunderbird tattoo meaning lies in representing the undefeatable fighting spirit of any native American tribe and that of a noble warrior. The thunderbird symbol comes from the eagles living in the sacred cedar forests and thus symbolise power, dominance, and courage.

Among the native American cultural landscape, some tribes (like Haida) create elaborate masks to highlight the thunderbird’s importance while some others (Iroquois) organise highly ritualized warrior dances to celebrate the connection of the Great Spirit to the thunderbird. The bird’s spirit stands as a symbol of all the traits of its cultural background and a tattoo design of this noble creature on your body will stand high to present your fighting spirit, your dedication to your culture, and serve to protect you.

One of the most popular thunderbird tattoos, this blackwork across the arm would definitely look cool. This is done in a cool design to depict the bird spreading its wings and is worked entirely in fine lines and clean-cut geometric design besides the beautiful shading on the wings and a hint of the same on the head and tail. This would be a perfect and simple tattoo design to pay your respect to the Supreme Being that is believed to rule over our cosmos and is connected to the thunderbird and serves as a symbol of spiritual power.

This design portrays the real thunderbird, that is the eagle and it brings forth the thunderbird’s sacred gifts of majesty and power related to the Great Spirit. Living among magnificent trees, the eagle is just a sign of courage and immortality and this blackwork eagle tattoo is mirroring exactly that- the stunning gradient shading on the feathers, the detailing of the claws and the multicoloured border silhouette of the bird really makes this an attractive piece on the legs but you can get this as back or arm tattoos as well.

This design can go anywhere in your body and you can get this in any size. It portrays the thunderbird in all its glory and it is a classic idea that will be deeply revered by everyone. Primarily in blackwork, the gradient shading on the body of the bird, the rectangles on the wings as well as the tail really stand out. The colouring of certain bands and boxes on this design in a little lighter shade than the stark black in the rest of the tattoo and the bright orange sun behind makes this one of the best thunderbird tattoo designs you will come across.

Accompanying the usual blackwork here are the usual vibrant colours associated with thunderbirds which are red and blue. The body of the bird remains in black while there is a light blackish shading present in the wings and tail. The red at the upper edge of the wing and at the bottom of the tail and the deep fading red from the eye to the neck is stunning. The bright blue rhombus in the middle as well as the blue ends of the wings add life to this classic blackwork. If this is your first time getting a tattoo, coloured pigments shouldn’t be recommended but you can still go for it if your skin is not prone to allergies.

Symbolising the thunderbird spirit in totality, surely this bird acts to portray a fighting spirit. These designs tend to be in similar geometric patterns forming the shape of the thunderbird. The design stretches across the chest and the splash of colours- from the black borders and the great gradient shading in the wings and tails to the brown in the head and wings of the bird, the red in the beak, body, wings, and tail complete with the blue in the eye, breast tail and the alternate blue and brown combination in the wings, stand really attractive and leaves very little room for further improvement. Although not recommended as your very first tattoo, if you’re looking to get a thunderbird tattooed, this concept will be quite valued.

If you want to go for a minimal arm tattoo, then this line art pattern can be a great choice. The black lines become highlighted with the contrasting light blue and make for a great idea. The gradient of black and blue in the head of the bird mix well with the unique but simplistic geometric design. Keeping the design same, you can replace the blue with any other colour if you want, like red or yellow to add your own creative touch. If you want to opt out of getting coloured pigments for the first time, this simple fine line blackwork would work out great as well.

Many people decide to add other ideas to magnify their native American thunderbird tattoo, like cedar trees, the home of the bird or totem poles representing the bird that are universally revered. In this line art blackwork tattoo, the customization was the addition of the evil eye that is a symbol of protection from anything sinful, Picasso’s constellation and the phases of the moon. This unique idea makes this thunderbird look even cooler and highlights the tattoo itself with greater meaning.

This blackwork tattoo remains a timeless classic and will never get boring-from the simplistic designs of gradient blackwork, for example, the slow fading of the dark black into grey with leaving a bit of skin exposed on the head and feathers of the bird and the sweet addition of flowers add a great touch and makes this design stand out among all the thunderbird tattoos. Blackwork tattoos are also known to cause the least amount of complications and do not require that much of a sincere after-care.

As common as these thunderbird designs get, it still never gets old. If you’re looking for a big sized arm tattoo that represents your indomitable fighting spirit, then this blackwork would be a great choice. With the large wings and a simple black ink gradient shading, this effortless design would always look cool topped with the fact that blackwork tattoos are the easiest to take care of and hence, perfect for first-timers.

This smooth thunderbird design pops out because of the bright splash of red in the middle contrasting beautifully with the steel done with grey, complete with clean white highlights and a black border, making it look like a car plate in a thunderbird design. While respecting your culture you could also make your tattoo personal, like getting birthdates or anniversary dates to liven up the design as well as make a special gesture towards your family, friends or a loved one like this one has.

To commemorate the native American symbol and your heritage, your own thunderbird designed tattoo may bring forth new opportunities coming down, much like the bird itself and guide you forward despite your hardships by becoming your personal emblem of strength and will undoubtedly be a respected concept.

Thunderbird tattoos are sure to set you apart and make you just as much of a warrior as the rest of your ancestors and heighten your own power and confidence.

If you’re looking for more ideas, it is said in certain myths and tales that the mythical bird’s spirit spends its days smoking tobacco from ornate cedar pipes, which makes for a very creative design and will be just as powerful. Besides the ones already mentioned, these tattoos too will make for great ideas:

Choose to your heart’s content and go for the one you like and get your long-awaited design permanently etched on your skin!