10 Best Terminator Tattoo Ideas You Have To See To Believe! 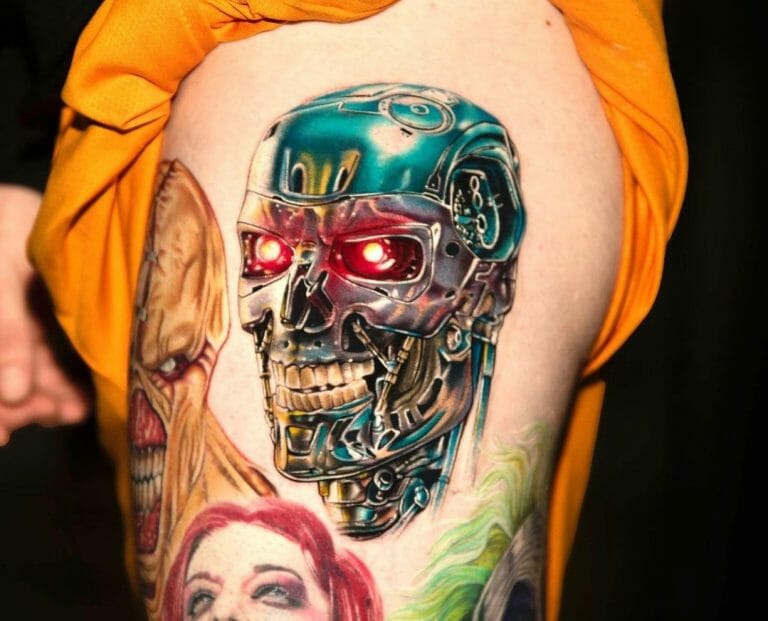 Come have a look at some of the coolest T-800 tattoos we have curated for you. Are you up for a ride down memory lane with the one and only Schwarzenegger?

The awesomely awesome and grandly sensational but explosive world of the Terminator is universally appealing.

When you are a hard-core Schwarzenegger fan, you cannot miss out on his role as an endoskeleton assassinator. His brooding, his stone-cold face, and the hard-core actions have had the audiences hooked since the first film was released in 1984.

While his awesome role as a Terminator has seen massive success ever since its release, making it one of the most iconic characters and the films, one of the most-watched sci-fi franchises in the world. The hellacious and delicious combination of Schwarzenegger as a cyborg, the idea of time-travelling, and science fiction credibility have both interested film addicts and critics around the globe.

There isn’t just Schwarzenegger but also the caricatures of his face, or that of a cyborg has become a fan favourite when it comes to tattoos, representing the bliss of a robotic and dystopian society that controls all the films plots. There are images of caricatures made by artists who give the terminator its own twist, creating quality art people who would love nothing more than to share their interest in both the films and tattoos with the rest of the world. Specifically, when body art is expressive, dazzling, or even electrifying, nothing can compare to the ferocious and demented charm of a Terminator Tattoo. The smooth yet disturbing blend of flesh and mechanical equipment, some amount of blood innovatively features the swagger of a cyborg ready to set things ablaze. Likewise, time-travelling is also a favorite among the tattoo community who choose a much lighter path than the otherwise destructive film franchise, revealing the fondness for the idea of time-travelling through ink that contains depth rather than flesh and blood. Not to mention, some of the most iconic lines make for awesome terminator tattoos that add depth to the ink. Some of the iconic lines include “I’ll be back!” and “Hasta la Vista, Baby!”. Men around the world are awed by the fearless and awesome harbinger of doom!

We have curated a tasteful collection of terminator tattoos that will definitely sway you to get one of your own. Not that Schwarzenneger and his iconic swagger hasn’t captured people’s ever since the first film. We are pretty sure some of these colourful, quirky, and electrifying body art will tickle your fancy!

If you are a tattoo artist or even a tattoo enthusiast then you are probably very familiar with Blackwork style tattoos. A blackwork style work is when a tattoo is inked solely with black ink and no other colour is included in the art. This sort of style is very popular among the tattoo community and is rendered in solid planes of black. While most blackwork is done with geometric shapes, there are many who prefer other subjects such as an iconic scene or an iconic character. This piece of ink features the Terminator in his quintessential all-black clothes which include the black leather jacket that he, very calmly, acquires from a gang, in the first film. This trademarks his legendary Terminator clothing.

This tattoo has an animated look to it and it still manages to keep its fierceness intact with Schwarzenegger signature look.

This terminator masterpiece of the endoskeleton head is absolutely breathtaking in its colourful glory. Every detail of the cyborg is styled with colourful ink and every cyborg tattoo enthusiast’s ultimate dream. It is, undoubtedly, one of the most sought-after designs for a terminator leg tattoo. While people enjoy all things Schwarzenegger, the cyborgs that feature in the films are also popular for creating a rave among the tattoo community. Those who love the films, will most definitely appreciate the vibrancy and realistic look of the tattoo.

It is, however, advised that one get their ink services done from a store that offer quality work. Seeing as such masterpieces need a certain amount of expertise and professionalism in order for the tattoo to look as well done as an original piece.

Portrait Tattoos are massively popular when it comes to films and their fandoms seeing as these styles capture the images of the characters’ faces best. As much as we love Schwarzenegger, his swagger, his iconic clothes, we share the same amount of great love for the other characters including Sarah Connor. This piece of art is another tattoo done in blackwork and has a realistic look to it, like any other portrait based on any character or faces.

Sleeve Tattoos are all rage in the tattoo community and while some are made with a compilation of small tattoos others cover an entire sleeve with one single tattoo, as seen in this piece. The T-800 endoskeleton is inked in hues of blue and metallic silver which is required for a great terminator tattoo. The art also has small details including an overhead light that shines a light on the cyborg giving it a realistic look, capturing a scene from the film. It makes for a perfect full-sleeve tattoo and looks majestic and vibrant.

This realistic piece of artwork is ideal for those who are looking for a more reference approach. Rather than getting Schwarzenegger tattooed, you can always have something like this Thumbs Up tattoo that highlights his leather-gloved hands. The artist creates a unique design by drawing focus on the hands only and a little peek of the endoskeleton can be seen in the lower portion of the gloves. It is edgy and apt for someone looking for something a little quirky but nothing too large.

This huge tattoo highlights the endoskeleton arm inside human flesh, something you are quite familiar with if you are a terminator die-hard fan. The tattoo provides an almost realistic look with the red edges created in the ripped flesh. The biomechanical arm is coloured with a dark shade of grey that replicates the exact shade of a machine. The tattoo has an almost 3D look and if you find such gory and edgy-looking tattoos appealing, this piece is sure to tickle your fancy.

When you think about an ideal terminator tattoo, it quintessentially includes Schwarzenneger, the T-800 endoskeleton or the cyborg, and the most popular of them all, the ripped-flesh mechanic arm. This 3D look that the artist gives the tattoo makes it all the more realistic. 3D terminator tattoo is a major hit among tattoo enthusiasts who appreciate one of many iconic scenes where the terminator rips off its flesh to reveal its endoskeleton to Miles Dyson. That gory scene makes for beautiful artwork for the body, especially for one forearm.

Another take on the ripped-flesh terminator tattoos also includes a biomechanic shoulder tattoo that makes for unexceptional body art. In this piece, the artist covers the front portion of the shoulder with an endoskeleton’s shoulder beneath human flesh. Tattoo enthusiasts who appreciate the terminator’s endoskeletons with all its flaws that capture the reality of what lies beneath the human skin will definitely appreciate this great piece.

All terminator tattoos are largely popular as we have already discussed the craze that links the tattoo community with the terminator fandom and if you are a terminator fan then you surely appreciate Arnold Schwarzenneger and his stone-cold swagger, something no other could have pulled off. Therefore, portrait tattoos of his face as the T-800 is every tattoo enthusiast’s dream body art. While it is a huge commitment to have such a large portrait tattooed to oneself, nothing else compares to a realistic body art than the quintessential half-burned face of Schwarzenneger, showcasing the terminator beneath. The red colouring used on one side of the tattoo gives it a beautiful glowing look and highlights the realistic aspect of the tattoo.

“I’ll Be Back” Terminator Tattoo

Last but definitely not least, this iconic neo-traditional style tattoo draws its inspiration from the iconic line from the terminator film “I’ll be back!”. This huge terminator hand tattoo carries a colorful and animated look for those who want to commemorate the catchphrase from the film, featuring Schwarzenegger, his ever-green swagger, and a stone-cold glare. It never gets old, does it? It also features other characters including Sarah Connor with a cartoon-like twist and a cartoon version of an endoskeleton. This once again links the fandom with the tattoo community where people share their devotion for the films or the comics or the web series through these small tattoos and catchphrases that provide an immense thrill.

Since we appreciate and adore or even glorify this sci-fi franchise, it is understandable that one would be thrilled to pay homage to the eminent creation of a world and share their fondness for the films and their characters and the stars. Some of us have grown up watching the whole franchise gain immense box office success. However, it is advised that you think twice and contemplate such huge commitments seeing as body art is permanent and it is required that one maintains hygiene while getting tattooed so as to avoid any complications in the future. On this note, we will also highlight that some of the terminator tattoos, specifically the portraits or the realistic ripped-flesh tattoos hold a certain level of depth and dimensionality that is otherwise not required or seen in other tattoos. Many of the images look like peeled flesh at first glance, making them ultimate images of inspiration and popular choice for terminator tattoos.

Listed below is another small curation of terminator tattoos that we have for you, you are welcome to go ahead and find inspiration from these pieces as well: