10 Best Tebori Tattoo Ideas You Have To See To Believe! 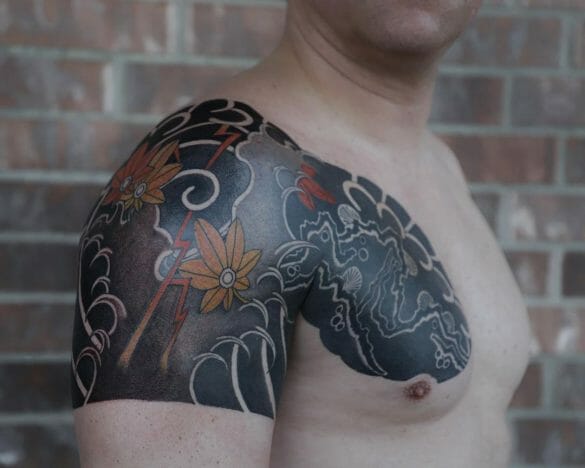 Here is your chance to take your pick from some of the trendiest Tebori Irezumi curated just for you. Explore with us 10 Tebori Tattoos that will blow your mind!

Traditional Japanese Tattoos are the most commonly and easily identified in the Tattoo community.

The artwork utilized in Japanese tattooing is unique, integrating cultural relevance with intricate line work. Tattoo enthusiasts looking to get a tattoo, there are few better alternatives than Japanese tattoos for something that sticks out as intricate and meaningful.

However, it is of utmost significance to understand the relevance and the severity of traditional tattoos before one can decide to get tattooed. Specifically, Traditional Japanese Tattoos, seeing as they are one of the oldest styles of tattoos to ever exist, spanning back to over five thousand years to the Edo Period. The history of Japanese Traditional Tattoos is intriguing, starting with the fact that while they were an expression of an art form, later on, they were used to mark criminals and delinquents, like the Japanʼs mafia or the Yazuka, and are infamously known as Yakuza Tattoo.

Several characters and symbols are used and there are two different methods of tattooing: traditional and modern. While modern tattooing is done with a tattoo machine, traditional Japanese tattooing is done using traditional methods like Tebori. “Te” translates to hand while “Bori” translates to “to carve”. Tebori tattooing has become immensely popular among young adults of this generation as they embrace their culture and globalize a beautiful tradition. Irezumi (Tattoos) were known to protect the receivers from evil spirits and it now pays homage to the culture and its traditions.

Tebori tattoos are a significant part of Japanese tattoo culture. Tebori artists have a name of their own called “Horishi” which translates to “carvers”. The title of a Horishi is a serious responsibility and has to be passed down by a Horishi mentor for one to become a Horishi themselves.

Tebori Tattoo tools are comprised of two parts: a metal or bamboo rod and a needle bundle. So, how long does a tebori tattoo take? Well, compared to modern machine techniques, the tebori method of tattooing usually takes longer than a regular tattoo.

We have curated a list that will introduce you to some of the most exotic and beautiful Tebori Tattoos. Read on and discover a gorgeous collection.

One of the most common and sought-after tebori tattoo designs among tattoo enthusiasts and the Japanese people is the Dragon. It is so because Dragon Tebori Tattoos are symbolically profound, representing Yin and Yang. The feminine energy of the Dragon is symbolic of strength, kindness, creativity, and patience. This Tebori Dragon Irezumi might not cover the entirety of the shoulder, but it is big enough to stand out. Many people choose to have their tattoos tattooed on their chest, close to their shoulders, some large tattoos even cover the shoulders. Tebori tattooists rhythmically move their hands to create a tattoo with the tebori needles.

Some of the tebori tattoo designs are said to tell stories that the Japanese culture regard with a lot of significance. Such small designs or a particular design of an animal are usually used to highlight the symbols and brands associated with it.

So, if you are looking to get a dragon-themed tebori tattoo and something not too loud then this one is yours to pick.

A full-sleeve tattoo is a huge commitment to have. So, it is only fitting if one spends a significant amount of time deciding on which design to get tattooed. Especially if you are looking to get it hand-carved by a tattoo artist. In this piece, the artist creates a full sleeve with florals and the dominant is black with scattered pinks and reddish hues in the flowers. Such Japanese tattoos are usually referred to as decorative tattoos or western style tattoos.

Tebori Irezumis like such are always vibrant in colour so, if you get a tebori tattoo of any design, itʼs most likely going to have a variety of colours, making it look vibrant and bright. Plus, colours in a Tebori tattoo hold a lot of importance, each colour has a history of its own linked with the Japanese tradition.

If you are looking to get a tebori that isnʼt a typical traditional irezumi then you will definitely choose a design that has a more westernized touch to it, however, the method of tattooing will remain tebori.

Koi Fishes are popular designs for Japanese Tattoos. They hold a lot of significance for the Japanese people and their culture, therefore, it is only obvious that they are used in traditional tattooing including hand tattooing. They symbolize transformation and the capacity to overcome misfortune. Not only that, it is said to bring good fortune and is associated with a long and deep history in Japan. If you are looking for a beautiful tattoo that is also symbolically meaningful then this is Koi Fish Tebori Tattoo is ideal for you.

The blue colour makes it vibrant and is placed in the forearm, while they can also be found in the small style, the larger ones are more popular around the world. Tebori tattoo needles create beautiful and accurate lines and are less painful, despite the fact that they take a longer time, it is worth it when the result is as gorgeous as this Koi.

Like Dragons and Koi Fishes, Tigers are also popular choices when it comes to Japanese art and ink. In Japan, people pay homage to the rich history of Irezumis with the traditional method as they embrace the art history from the Edo period. Tigers represent strength and are said to be protectors who drive away bad luck and evil spirits.

In this piece of art, the artist uses tebori needles to ink a simple tiger in a vertical position. It has a minimalistic look with off-white covering the entirety of the tattoo, while black stripes are used to highlight the rest of the tigerʼs little details. Reds and yellows are used to ink the teeth and eyes of the Tiger.

It is an ideal style if you prefer minimalistic, meaningful tattoos.

Hebi is a Japanese word that signifies serpent. In most situations, the cunning snake in the Western world carries with it negative connotations. However, it is stated in ancient Japan that if you come across a snake, especially a white one, you will be rewarded with good luck; nevertheless, stumbling across a dead snake is a very negative omen. Even their colours hold significant meanings, making them a very sought-after style in Japan and around the world too.

In this artwork, the artist has created a half sleeve and tattoo covering snake tebori and used dark-toned colours to highlight the snake and the peonies. The snake is coloured in a dark shade of Green and the Peonies are done in blues. Black has also been used to cover a lot of areas in the tattoo, giving the overall tattoo a traditional and exotic look.

The origin of the Oni comes from the belief systems of the Hindus and the Buddhists. Oni is masculine demons that punish evildoers while also spreading sickness. While Oni is often seen as malevolent, certain Oni are regarded as guardians of the innocent and virtuous. Samurai frequently donned an Oni, or devil mask, which has made its way into tattoo culture.

In this tebori work, the tattoo artist uses the bold red colour to create an Oni Mask, sticking to the traditional look of red, demonic look. People might be tempted to get an Oni tattoo because they are exotically vibrant and speak of rich folklore, something people often find intriguing.

If you are looking for something quirky and preferably something small then this can be your choice of tattoo. Japanese artists are usually more used to creating Oni tattoos with the Tebori method, so it will definitely add to the professional look of a tattoo.

Consider having a large-scale tattoo on your back if you aren’t scared to make a statement. If you want to highlight the fine intricacies of Japanese tattoos, your back is the ideal canvas. While it will probably take a very long time if a tattoo artist uses a traditional tebori tattoo instrument like the bamboo rods and silk threads, the whole process and the wait will definitely be worth it if itʼs anything like this gorgeous piece of art.

It is one of the most intricate and beautiful pieces of work and to think it has been entirely hand-carved. The beauty of the tattoo is enough to convince a tattoo enthusiast to find artists who can create such magical art.

While this might look like a huge commitment, it will also make up for the time spent.

This little tattoo is probably one of the quirkiest ink ones can get done. Like many of our beloved Japanese characters, Hyottoko rose to prominence as a masked character in Noh Theatre. Since Noh Theatre is still running actively in Japan, the character of Hyottoko continues to be a favourite style of ink to get for the irezumi admirers.

Tattoo artists or Irezumi artists as the Japanese call them are often found inking Hyottoko Masks for people however, most of the lines are done with tattoo machines while the colouring is filled with Tebori. Like this particular Hyottoko tattoo, it is simple, funny-looking, and has the bare minimum colours used.

Lotus flowers, Chrysanthemums, Peonies, etc. are commonly found in designs in Japan and its tattoo culture. However, Japanʼs favourite Cherry Blossoms or the Sakura Flowers are almost all Japanese tattoo artistsʼ easiest and favourite things to ink. In this simple Sakura tattoo, the artist draws the lines with coils however, the shading and colouring are done with tebori.

If you like Sakura flowers as much as the rest of the world, then this sweet little tattoo featuring an arrow passing through the flowers will definitely tickle your fancy.

While some of the tebori tattoos in this list are simplistic in design, nothing compares to the simplicity and the beauty of this small, cute little piece. Completely done in black with the tebori method, the tattoo is ideal for those who prefer simple one-toned and small tattoos. It is tasteful, cute, and will probably take up lesser time than other large tebori tattoos.

Tattoos are a large part of Japanese culture as well as the world. While many artists are good at what they do, it is highly recommended that you visit Japanese tattoo artists or a Horishi seeing as they specialize in Tebori work. Tattooists today use a blend of tattoo machines and tebori bamboo rods to create beautiful artwork, however, tattoo artists believe that a purely tebori method heal faster than modern-day tattoo machines seeing as the process is slow unlike the rapid digging motion of a tattoo machine. You might also want to know how much does tebori tattoo cost? Well, due to the number of sessions required to complete a tattoo and the intense hard work, Tebori is more expensive than a regular tattoo, ranging from somewhere around 90-130 USD.

We hope you are ready enough to get your first tebori tattoo or have found your choice of design from our collection of tebori artwork.