10 Best Tea Cup Tattoo Ideas That Will Blow Your Mind! 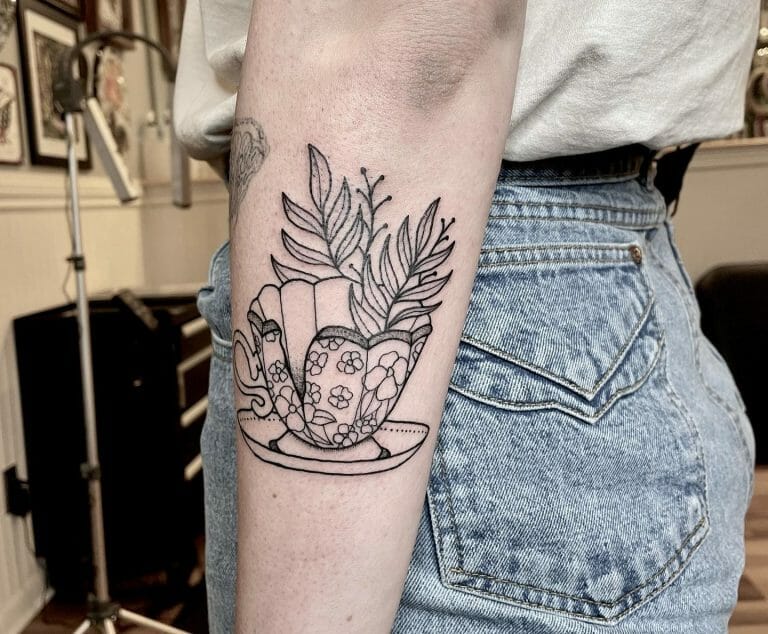 Are you in search of new and innovative tea cup tattoo ideas? Here are a few handpicked amazing teacup tattoo designs you will love.

Tea is a popular drink among people all over the world.

Tea is made from the leaves of the tea plant. Tea is made and stored in a tea pot and is drunk by people during tea time.

Some of the early drinkers of tea were the Chinese and the Japanese and it was drunk as a medicine. Slowly it became a cultural drink as people gathered in groups to drink tea and chat among themselves. Then tea got famous in various other parts of the world. Teacups are made from porcelain and fine clay and are majorly manufactured in the country of China. With the change in time, the fashion in teacups also evolved and different types of designs were printed on the teacups. However, the most famous designs still remain to be floral patterns.

Tea lovers have now made teacup tattoos a thing, though it is a fairly new tattoo idea variety. In a less span of time, this tattoo idea has become quite popular. People ink teacups of various shapes, sizes, and with different patterns according to their liking. Innovating and inspired tattoo artists also combine other elements with a teacup tattoo, creating new featured designs.

This is a colourful miniature tattoo of a hot cup of tea on a saucer with elaborate details. The rim of the saucer, the upper and lower edge of the teacup along with the handle are done with a bright shimmer of golden. The floral patterns are inked in blue with modest black shading. The vapour coming from the teacup is shown with dispersed dots in formations of spiral curves. The tattoo is done in a 3D style with the lighting shown with white ink at just the right places which gives it a realistic touch.

Toad In A Teacup Tattoo

A teacup toad tattoo is a unique tattoo design. A crescent moon and a few blades of grass are the extra add-ons put into the tattoo design. The teacup is decorated with ornamental circular patterns at the foot in a combination of white, grey, and black. The body of the teacup has a rose imprinted on it with a trio of three mature leaves and 3 to 4 branches of small baby leaves. One particular leaf at the bottom of the main branch is done in black bold dots with a grey background surfacing out its structure.

Thunderstorm In A Teacup tattoo

This tattoo of a thunderstorm in a teacup, inked in bold rich deep colours holds a profound meaning. A storm in a teacup is a symbol of anger and frustration about an unimportant topic. A flash of thunder filled with white, yellow, and red polka dots, is blazing out of a thick single cloud. The cloud has a cartoon effect with a black shade at the centre and bottom. The cloud is adorned with white polka dots along its entire inner edge and seven raindrops are pouring out of it. The water current in the teacup is in an uproar and is giving the impression as if the waves are about to touch the clouds. The white stars on both sides of the crescent moon on the body of the teacup and the tri-dots in black throughout the entire tattoo design is wrapping up the tattoo beautifully. If you are looking for an out-of-the-box teacup tattoo design, assume your search is over as this is the perfect tattoo for you.

A cracked teacup with mushrooms adorning its sides and a snail crawling out of it is quite a unique tattoo design idea. This tattoo represents something broken on which nature has taken over. There are three mushrooms with a few leaf-like structures here and there. The teacup has a rich texture and a fairly exhaustive handle. The slightly broken lip of the teacup and minute cracks along the sides outcasted it from its other teacup partners’ circle but nature accepts it and makes it look beautiful just the way it is. This is thus the perfect tattoo for someone who was broken and is right now on the path of healing, as a symbol of the eccentric journey of the person.

This is an elegant tattoo of a teacup on a saucer with floral patterns on it. The tattoo artist used the skin as the base for this traditional tea cup tattoo design and has inked the tattoo design with great precision and expertise. There are red, yellow, and pink roses with patterns of leaf inked all around the rim of the saucer as well as the body of the teacup. It is a perfect tattoo for an all-time tea lover. Here it is done on the forearm but this tattoo design can be done on any part of the body and still look good.

Mushrooms In A Teacup Tattoo

This is a unique and crafty tattoo design done on the lower leg of the tattoo bearer. Done with rich black ink, the tattoo has come out to be very neat and petite. The tattoo shows mushrooms of all sizes, tall, medium, and short, coming out of a teacup on a saucer. The teacup has small leaves drawn all over the body, while the teacup is put on a saucer with a tall edge and an uplifted centre. The thread of a tea bag is visible coming out of the lip of the teacup and falling on the body of the teacup. The tread has a handle attached to it that has “tea” written on it. This is a perfect tattoo for someone who is both a tea and mushroom lover.

This is a minimalist tea cup tattoo design that is done with a 3D effect. The base of the tattoo is a colour similar to the skin shade and the technique used by the artist makes the tattoo look as if real. It is a classic tea cup tattoo with a flower on the body of the tea cup and on opposite sides of the saucer. All the rims and edges have been marked with golden, which could be seen in the traditional tea cup designs. The lip on the cup and the edge of the saucer is uneven and has a slight wave-like pattern. This will be a favourite choice of tattoo for all tea lovers.

Cat In A Teacup Tatoo

This is one of the most unique tattoo ideas of all time. This tattoo design has a black cat inside a teabag, the string of which is wrapped around the handle of the tea cup and the handle attached to the string extends to the body. The teacup is tilted and the tea is splashing upwards, while the dark black cat is staring with vivid eyes from the teabag that is entering the teacup. The entire tattoo is done in black except for the patterns drawn in green. This is a perfect tattoo for a tea and a cat lover who is looking for a tattoo idea combining the two.

This tattoo has a magical aura to it. Vibrant and bold colours have been used with crafty designs. The magical smoke coming out of the teacup with a purple background is quite an innovative teacup tattoo idea. There are purple flowers drawn at the end of the tattoo. The body of the teacup has a black base with blue flowers and a crescent moon drawn on it. The magical tea is shown in brown while touches of orange spread her and there. This is the tattoo for someone who has a taste in magic and supernatural stuff, or someone who is looking for vibrant use of colours with a dark base can also go for this tattoo.

This is a tattoo of three stacked teacups with different designs inked on each one, but have the same base of colours used. Such tattoos of stacked teacups are many times done, where each teacup represents someone or something. Here, the teacups are stacked in an uneven manner, while all three teacups look similar in shape and size, they have different floral and ornamental patterns. Such a tattoo design idea is best if one wants to ink a tattoo as a tribute to their family members or friends.

If you loved the teacup tattoo ideas mentioned above, here are a few other related tattoo design ideas that you might want to explore.