10 Best Taurus Constellation Tattoo Ideas You Have To See To Believe! 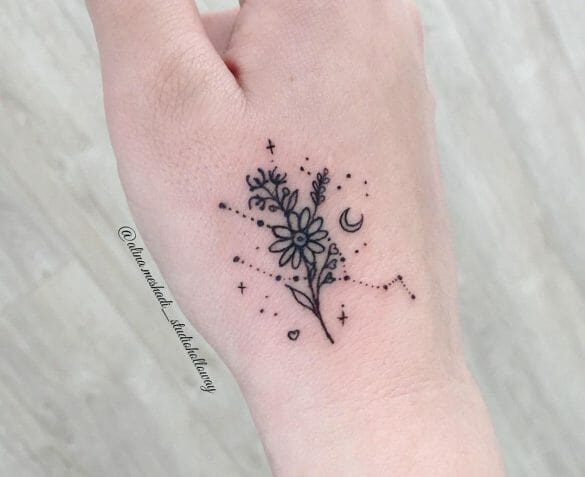 Are you looking for some cool Taurus constellation tattoo ideas? Well, you have come to the right place. Browse down to take your pick.

The term ‘Taurus’ is a Latin word meaning bull. The constellation consists of nineteen main stars and has Auriga, Aries, Cetus, Orion, Perseus, Eridanus and Gemini as the bordering constellations. As a zodiac sign, Taurus is the second astrological sign in the modern zodiac calendar, ruled by Venus and is the fixed modality of three earth signs including Virgo and Capricorn. Taurus people are identified as ones being determined, straightforward, loyal and stubborn personalities. They are both physically and mentally strong. They are easily prone to anger and can be terrifying when provoked. They do not open their hearts for anybody, but when they do, they love intensely. People born between April 20 to May 20 fall under this category and are called Taureans. Famous personalities like Queen Elizabeth II, Dwayne Johnson, Megan Fox, Adele, Mark Zuckerberg, Sachin Tendulkar, Andy Murray share the same zodiac sign. Zodiac signs like Capricorn, Virgo, Pisces, Cancer are considered as the soulmates for Taurus. Libra is treated as the best match for the bulls since they both are ruled by Venus, but beware of Scorpio and Aquarius! They are destined enemies!

The popularity of the Taurus zodiac tattoo or the Taurus symbol tattoo or even any Taurus constellation tattoo designs might be limited within the Taureans only, but the bull skull and bull tattoos are extremely popular among tattoo lovers. Bulls generally symbolise strength. Strong-minded people get easily attracted to such symbolic beasts, regardless of their gender, though only women are said to be keen to get a Taurus zodiac symbol on their skin. However one must remember that style has no gender and anyone can pull up any style if that person is confident enough. This list contains ten handpicked Taurus constellation tattoos for all kinds of Taurus personality traits. So let’s dive in!

Topping this list is a small Taurus tattoo with a flower in between the constellation. A perfect Taurus tattoo design for the first tattoo experience. The design is extremely popular among women, nonetheless, it is imperative that we mention that not only Taurus females but also males can go for this Taurus sign; because style is not restricted to a particular gender.

The main stars are defined with dots, linked with each other by smaller dots forming lines while the adjacent stars are given the typical star motif. Though the flower and the buds and leaves in the middle draw the main attraction towards themselves, the Taurus here does not lose its relevance. The crescent moon adds to the serenity of the tattoo. Taurus people are often said to have calm and composed personalities. Thus, the addition of flowers and the moon elevate the personality traits of the Taureans.

What can be better than a splash of colours to express your colourful personality through tattoo designs! This piece of art not only highlights the Taurus constellation but also portrays the Leo constellation within it, though the two constellations do not lie adjacent to each other. The distinctive use of different colours without making it a disastrous representation of a night sky clearly shows the sheer talent and patience of the artist. Notice the mixing of colours of the night sky above; the grey, blue and dark blue together create the mystic night sky and the white dots add more vibrance to the landscape.

If minimalism were an art, then this artist would be the Picasso of it! Small tattoos, like Taurus tattoos or Taurus zodiac tattoos, are more popular among women than men. Flowers are often associated with Taurus constellation tattoos and you will not find a single design repetitive or monotonous. Taurus people are usually known for their generosity, loyalty and kindness, though they can be fierce if you mess with them. Hence the flowers and leaves inked into the Taurus zodiac tattoo and the Taurus constellation underline the personality traits of a Taurus person. The white and light blue tint of the flowers adds a minimalistic charm to the tattoo. You can easily personalise this tattoo by adding your birth date in roman numerals distinguishing it from any other constellation Taurus tattoo.

The bull, being associated with the Taurus zodiac sign, can be inked in any way according to his/her choice. Unlike the other tattoo designs, this Taurus tattoo does not intend to exude calmness or serenity but a fierce and angry vibe is prominent here. Bulls are generally angry and stubborn beasts and can be extremely terrifying when provoked. One of the major personality traits of Taurus people is that they are extremely stubborn. The Cretan bull in this tattoo resonates with the stubbornness of a straightforward and blunt Taurus person.

This Taurus tattoo is not a typical tattoo outline. The entire bull has been drawn skillfully by using dotwork technique. Both light and dark shadings are done by the dots. The bull is kept unfinished and beneath it, the tattoo artist has drawn the Taurus constellation to complete the picture. The entire tattoo covers minimal skin but can easily be enlarged and inked as a back tattoo.

The inclusion of roses in every tattoo idea is a common game in any tattoo shop in the universe. One might not like roses in every tattoo design but again there are people who absolutely love such tattoo ideas. Hence, the rose in a Taurus constellation tattoo is not at all an off-beat choice. Rose defines love and Taurus people are believed to be the believers of intense sensual love.

The rose in this tattoo is a bold outline work with dotted details in the petals and leaves. What catches the eyes is the alternate inking of black and a slightly whitish colour in the Taurus constellation. The stars are drawn by numerous minute strokes of diagonal lines. The forearm is the best place to flaunt this tattoo.

Nothing is cuter than showing off your love for your pets! Being the first earth sign holders, Taurus people’s love for animals is known to all. No wonder Taurus tattoo lovers would also like to imprint their pet’s signature on their skin. This tattoo explicitly shows the owner’s immense love for her dog. The tattoo is quite simple- a clean dot work to link all the stars. But those nine bright stars are replaced with nine cute, little paws of dogs. It is the best choice for dog-loving Taureans. If you like animals and prefer such Taurus tattoo ideas, you can definitely go for such designs with some other animals’ imprints on them. Draw oohs and aahs with this cute small Taurus constellation tattoo.

Apparently, Taurus tattoo designs with flowers in them are some of the very common designs in the tattoo industry. But the distinctive ways how those flowers are being included make the difference in every case. In this instance, the tattoo may be more appropriately termed ‘Taurus flower constellation tattoo’ instead of ‘Taurus star constellation tattoo’ as the stars are replaced with small flowers.

This tattoo is a ‘carefully careless’ artwork with thick hyphens that are drawn to link those small simple floral motifs together to give them the structure of the Taurus sign. The artist has shown how plain black artwork with bare minimum effort can draw much attention towards itself. This girly Taurus tattoo is all about minimum effort, maximum effect.

The Mythical Bull And Star Tattoo

A complex design adds variety to a tattoo list. Here is the one! According to Greek mythology, only the upper body of the Cretan bull is shown because it shows Zeus crossing the Mediterranean Sea carrying Europa on his back. Hence, his lower body is submerged in the sea.

This tattoo at its first glance appears to be a complex bull tattoo. The stars, the planet behind it and the astronaut below might look irrelevant and even exceptionally crowded to some. But actually, the bull stands as the symbol of the constellation. A close observation will reveal those extremely fine dots connecting those big stars in the bull’s horns, nose, legs and hooves. The stars and the dotted lines make a very vague but nevertheless complete picture of the Taurus constellation.

A minimalist design is a must to complete the circle. This tattoo artist must have mastered the definition of minimalism. A remarkably fine dot work anybody can ask for, this tattoo is just here to fulfil one’s coveted simple, small and bare minimum tattoo ideas. The first two stars are drawn as two crosses, the next three stars including the one on the left are made by three bigger mole-sized dots and the rest three are conventional star patterns. The fine dots join the nine stars and form a cute Taurus constellation. This super cool tattoo blends perfectly with the freckles of the owner’s skin to make it more adorable. This one will draw more attention if anyone gets it on his/her wrists as a permanent bracelet idea.

The last one in this list has to be the most obvious looking Taurus constellation tattoo with its zodiac sign in it. This tattoo, unlike other ones in this list, does not contain the prominent nine stars that make the basic skeleton of the constellation, but some nine dots are there to mark the line breakings making it simple and clear linework. The stars are drawn but as neighbouring figures of the Taurus constellation. The two smaller dots outside the constellation blends with the skin as two perfect moles whereas the entire sketch sets perfectly on the given space. A small Taurus zodiac sign has also been inked, though it could be used separately as a different one.

According to Greek mythology, Greek God Zeus fell in love with Europa, daughter of the Phoenician king, Agenor. In order to catch her attention, Zeus turned himself into an impressive while bull and got mingled with the herd. Attracted by his beauty, Europa hopped onto the back of the bull and Zeus abducted her immediately to the island of Crete, crossing the Mediterranean Sea. Since then he is also called the Cretan Bull. In other Greek tales, it is said that Zeus turned his mistress Io into a bull to hide her from his wife, Hera when they were about to get caught by her.

The Mesopotamians considered Taurus as the first among the zodiac signs during the Bronze age. They called it ‘the Great Bull of Heaven’. Bull is connected to many mythological tales of different religions across several cultures where they are all worshipped equally as Gods.

Here are some other suggestions for you. Happy inking!