101 Best Tattoo Calavera Ideas That Will Blow Your Mind! 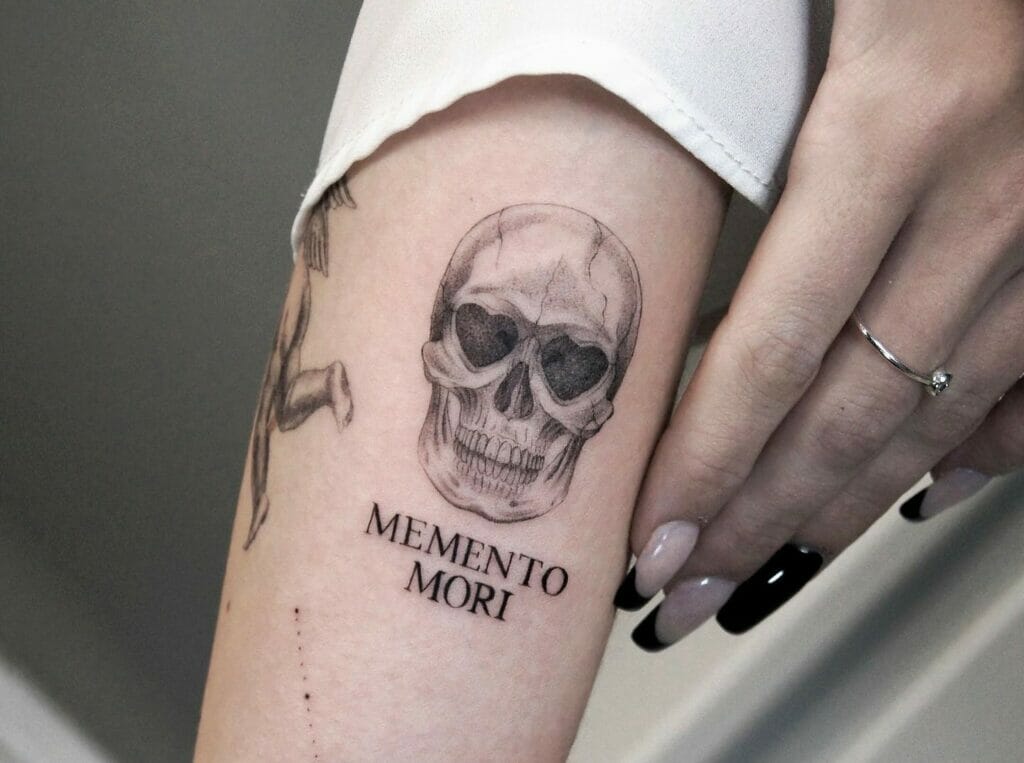 If the tattoo Calavera is your most cherished tattoo design, then these cool sugar skull tattoo ideas will impress you easily.

The history of the Calavera tattoos goes a long and old way. These tattoos bear a traditional and cultural significance to them.

It all started in Mexico when they invented a way of honoring Death in the form of a ritualistic tradition. Since the 1630s, these decorative skulls have been produced for cultural and entertainment purposes. But their source lies in the good old tradition of the Day of the Dead, All Soul’s Day, and All Hallow’s Day. Paying tribute to the deceased souls but playfully was the main motto of the Mexican Day of the Dead or what they call Día de Los Muertosin Spanish.

The Day of the Dead is widely known for its unusual rituals like offering an altar full of food and beverages to the departed souls of the beloved people known as ofrendas or offering decorative skulls made of sugar or clay to the near and dear ones remembering the dead souls. Where Death is to be avoided and feared, these people have made life simpler by accepting the inevitability of death and seeing it as a way to another life. So Calavera skulls have this amazing symbolism associated with them. Getting a Calavera tattoo will be an excellent choice for those who respect this popular tradition and also believe in something similar.

Calaveras are almost always colorful. So this Calavera skull tattoo with colorful flowers is not a surprise. This is a sleeve tattoo of Calavera gorgeously decorated with designs of different flowers. There are floral designs on the face of the skull as well. The contrasting shading of bright and dark colors makes it pop out more.

Sugar skulls or Calaveras are often decorated with symbolic Aztec marigold flowers. Although these are not the typical flowers used in the ceremony, the tattoo symbolizes rebirth or reincarnation. Flowers are thought to be powerfully active in bringing deceased souls to the Earth. Also, the dominant colors like red, blue, pink, and violet in the sugar skull tattoo mostly mean passionate love and mourning for a beloved. If you are suffering from heart-wrenching mourning for someone you love dearly, this type of skull tattoo can bring you peace from within.

Etched with black ink, the skull tattoo design has a floral crown on top of its head. The sugar skull tattoos on the leg will attract the gaze of any onlooker with their contrasting shades. The hollow lifelessness of the eyes is juxtaposed with the lively colors of the flowers. The dotwork with black ink has created the perfect shadows here they are needed.

Female skulls are popularly used as Calaveras for the celebration of Día de Los Muertos. The contrasting images of a scary skull and bright colored flowers have mixed so well together in the tattoo to create a meaningful symbolism. Flower crowns have always been a representation of eternity. The skull symbolizing death and the flower crown representing eternity has an opposing effect.

Day Of The Dead Calavera Tattoo

This skull tattoo is the most creative and fascinating of all the Day of the Dead tattoos on this list. The colorful strokes of blue and purple are clearly noticeable in the black ink tattoo. The clear distinction between the two skeletal representations of the ritual of the Day of the Dead is cleverly put together to mean the same thing.

The image of La Catrina on the left side is from the Mexican illustrations of José Guadalupe Posada, who brought this iconic image of the wealthy and beautiful skeletal woman into this world. Her image threw an upheaval among the Mexican people who started making her skull as Calaveras or into artistic expressions like makeup or tattoos. On the other hand, the generic Calavera skull is popular as sugar skulls all around the world. These two skulls symbolize the same thing, the need to put an end to the fear of Death and to accept Life as it is.

This calf muscle skull tattoo snatches everyone’s attention to itself. This tattoo is wonderfully colored with the purple color used for the skull. The Calavera is decorated with mandala and floral designs and some beautiful flowers on the head of the skull. The aesthetic sense of the tattoo artists is amazing as they have done such a cool job.

As always, decorated Calaveras allude to the tribute to the departed souls and the afterlife. The rose within the skull symbolizes everlasting love for a soulmate who has passed away, but the mourning for that person still lingers on in the heart.

This artistic creation of a beautifully decked Calavera tattoo meaning is quite simple, but the design and the decorations amaze us. The black ink glides through the ink and forms pretty flowers. The gorgeous mandala art of the tattoo Calavera is an inspiration to many artists.

This tattoo could be done anywhere on the body, be it the back, the thighs, the waist, or the chest. But wherever you put this design, it will look elegant. If you have faced a near-death experience, this skull tattoo is the one for you.

Small skull tattoos are apt for etching onto the nack area or on the feet. This tattoo is cute and tiny, perfect for neck or leg tattoos. Posited perfectly on the inner side of the ankle, this aesthetic and small tattoo brings joy to the tattoo bearer.

If someone loses a beloved, they might select this design for their tattoo art. The skull’s eyes look like sunflowers and those rotten teeth are out in a laughing manner making the tattoo look intriguing.

This skull tattoo in black ink inflicts an aesthetic pleasure in your mind through its beauty and art. This is again a sleeve tattoo for those tattoo lovers who like to show off their artistic sense by tattooing on their arms.

This tattoo is in the memory of the tattoo owner’s aunt. Similarly, you can also get a tattoo that will remind you of someone who was once a huge part of your life.

An elegant piece of body art on the back catches the attention of many onlookers. People might stop and gawk at this skull tattoo with flowers and butterflies all around it. The colorful tattoo has red roses and blue butterflies, which form a striking effect on the black ink skull tattooed on the white skin. It is one of the most gorgeous skull tattoos.

Blue butterflies signify liberation, and red roses often bear the connotation of eternal love for a loved one. Together with the decorated skull, they represent the freedom to live life without worrying about loss while also loving the late souls as long as possible. If you have lost your beloved and want to gain nirvana from the pain and sorrow, this tattoo might be medicine for you.

This is a vibrant and fancy tattoo on the thigh based on the figure of Mexican La Catrina. The striking blue color of the hair is so bright that it attracts anyone and everyone. Simultaneously, the other colors like pink, yellow, red, and violet bring life to the art, making the face of Catrina Calavera look beautiful and innocent.

The image of Catrina La Calavera Garbancerawas originally created by the Mexican Lithographer and cartoonist José Guadalupe Posada. Her face or skull mostly represents the Day of the Dead ritual. In fact, this figure is the very reason why female skulls are used for Calavera designs and decorations. To accept the brutal truth of mortality and live life to the fullest is the real meaning of this icon. Getting the Mexican Calavera tattoo of La Catrina will make you look more lively and attractive.

Tribal tattoos have a smooth way of winning hearts. This particular tribal Calavera tattoo on the calf muscle has so many things going on within it. There is a heart, a flower, a butterfly on the skull, and so many dark and light black tribal designs. The sugar skull tattoos are so skilfully drawn as to promote a symbolic essence to them.

The butterfly is often considered to be a symbol of the swift transition from life to death. The flower and the heart bring us the image of rebirth and reincarnation even though these are just the decorations for the Calavera skull. The image of the skull often means that the spirits of the dead ones are near us, looking out for us. If you have a life-changing loss, maybe a loss of a beloved one, you may opt for this beautiful tattoo.

Calavera Skull tattoos are a way of externalizing your grief through art and inhaling the sweet realization that everyone must leave at one point or another. Death is just a part of living. There is something beyond the threshold of life, maybe an afterlife or a reincarnation. So it is a wise contemplation that remembering our ancestors or deceased loved ones is a way of keeping their memories intact. What the Mexicans do as a festival or ritual is actually a spiritual medium of communicating with those who cannot be seen or touched. Calavera is a great inspiration for diligent tattoo artists and tattoo lovers all around the world. This is an archive of the best tattoo Calavera ideas for you, with their meaning and symbolization explained.

What is a tattoo calavera?

Tattoo calaveras, also known as sugar skulls, are a popular form of body art originating from Mexico. The designs can range from simple black outlines to intricate and colorful works of art. They usually feature the image of a human skull, decorated with vivid colors and often adorned with flowers, feathers and other festive decorations. Calaveras, which can be seen in traditional Day of the Dead celebrations, are said to represent death and rebirth. They often symbolize remembrance and personal transformation.

What does a tattoo calavera represent?

Tattoo calaveras are often associated with the Day of the Dead, a Mexican holiday which celebrates departed loved ones. They represent remembrance and personal transformation, celebrating death as part of life. The designs usually feature festive colors such as pink and orange, along with decorations like flowers, feathers and other symbols of joy. Calaveras also represent the cycle of life, with the sugar skull signifying death and representing a new beginning.

What are some of the most popular calavera tattoo designs?

The most popular calavera tattoo designs include traditional sugar skulls, which feature a human skull surrounded by colorful decorations. Other popular designs may incorporate elements such as geometric shapes, flowers, hearts, stars and other symbols of life and death. Some people also choose to add personal touches such as their own name or the names of their loved ones to their calavera tattoos.