10 Best Switchblade Tattoo Ideas You Have To See To Believe! 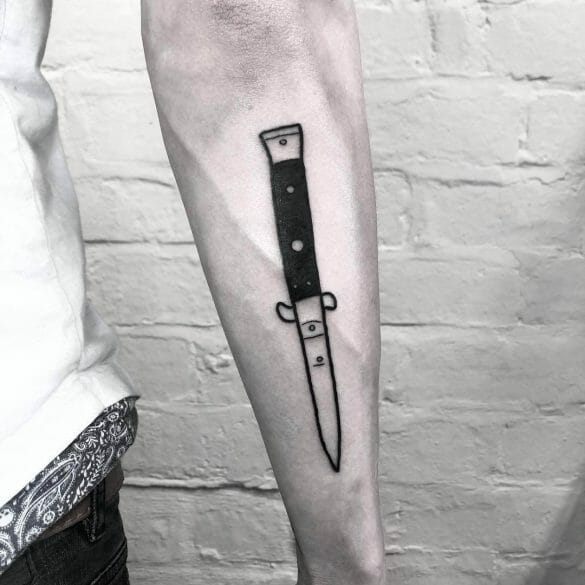 Looking for some razor-sharp switchblade tattoo ideas? Here’s is a list of some of the best tattoos that are cut out for your taste!

It was first created in the 1700s and was widely used because of how convenient these knives were for their classic foldable design with a classic or customized handle which prevented people from accidentally stabbing themselves while carrying them. It was also greatly feared knives because criminals often used these knives as weapons and use them to commit many crimes.

Switchblades despite being banned in many places are still viewed as the coolest popular knives ever and a switchblade tattoo also holds a very personal meaning. A popular switchblade tattoo meaning is related to military service. They were not only deemed the coolest knives for how they looked but they were widely used as the more feared knives in World War II and other multiple wars in the past. Therefore, as per this context, a popular switchblade tattoo meaning can also refer to the protection against evil which is one of the great meanings amongst most tattoos.

If you are interested in knives and are thinking about getting a knife tattoo, you can check out a few of the designs of switchblade tattoos and consider getting one because not only is it a cool and classic knife design but there are many reasons and interesting meanings and other elements to choose from. It can represent your sharp and quick-witted character as well as someone who has no fear. Classic and modern switchblade tattoos are also pretty easy to get.

If you are looking for a simple and minimalistic black and white tattoo of a switchblade, this one is a great choice. For starters, switchblade tattoos also represent a new beginning after cutting ties with an old past. This particular design might be simple but it has a customized heart design on the handle. It can be symbolic if you’re planning to get a break-up tattoo or a tattoo to remind you about the tough love that you’ve received from someone. The design is crisp, neat, and quite minimal and will look good almost anywhere on your body. But if you want it to be starkly visible, you can opt for this design on your hand. It can also be a great tattoo for starts who want to show a rebellious streak. Overall, this is a great unisex monochromatic version of this tattoo that will look badass on anybody looking for a tattoo with a meaning attached to it.

This black and white tattoo is a perfect choice if you want a meaningful tattoo to remind you of pain and strength. It is perfectly designed with a switchblade stabbing an eye. The tears which can also be symbolized as blood add to the dramatic effect. The switchblade design is that of any normal or random switchblade. With the eye as an added element to the design, it can symbolize a plethora of meanings that you can choose from which is all up to your discretion. Firstly, it can symbolize a painful event someone has witnessed and recovered from. It also gives off an eye for an eye vibe which is symbolic of revenge which is greatly signified by the switchblade. Thirdly, it can also be a permanent reminder of an important event in your life that has left you broken but you’ve risen from the ashes and will always make you remember how strong you are as a person.

Switchblades were early symbols of bloody crime and murder. They were greatly feared as weapons as the crime rate rose considerably after they were invented. This bloody switchblade design can be a cool addition to your tattoo collection if you are a sucker for the history of weaponry. Even if you are not, it can also symbolize hard work through blood, sweat, and tears which helped you achieve something worthwhile in your life. It is a great tattoo addition to a tattoo sleeve and also a good first tattoo idea if you want to rebel out and scare your parents. This design highlights the blood which is the only coloured element here and emphasizes it making its meaning stand out further. It can be symbolic of a tough time that made a person bleed mentally after which they have survived and recovered.

This switchblade tattoo is an iconic one especially if you are into the gang aesthetic. It can be a cool design to have permanently inked in your body especially if you are looking for a full-sized one to display on your entire arm. it is a simple, minimalistic, yet quite elegant design that is bound to turn heads what will ask you for its significance. What makes it all the more unique is its subtle snake design customised on the handle. It can have a great symbolic meaning behind it, such as literally being bitten by a snake at some point in your life and recovering from it, or having cut off an important person in your life who acted more like a snake to you than a real person. It will also go great if you have a snake obsession and can be a great pairing with a snake bite piercing if you are into piercings and body modifications.

If you are looking for a bit of colour with a bit of revenge on the side for a tattoo design idea, this is one of the best choices you will ever find. The most unique feature of a switchblade is that it can be folded and stored so it doesn’t hurt anybody, thereby literally making it ‘pocket’ friendly. This design of the folded switchblade can also be symbolic of one’s character especially if they constantly remain closed up so as to not potentially hurt them if they open up. The colours can be symbolic of your selfless personality but also act as a reminder that you are a razor-sharp rainbow. You can most definitely do away with the webs, but you cannot deny that they do add some dramatic and meaningful effect as well. Colourful tattoos can be tricky to get and this ombre design can be a hit or miss depending on the tattoo artist. You can opt-out from getting a coloured version of this tattoo and go for a black and white version of it as well as it will make it equally meaningful.

Abstract tattoos are always in vogue. This tattoo also emanates a similar sort of vibe. While a switchblade is supposed to be pointed and shard, this one has a firm handle with a distorted blade which can be left for conjecture. One of the best interpretations of this can be the failure of doing something bad and realizing it afterwards thereby turning over a new leaf. It is also a great tattoo for people who have survived near-death events as the distorted blade may symbolise how they cheated the sharp blade of death because it wasn’t their time of dying.

This is the most common and cliched tattoo that most tattoo artists have inked on someone. A switchblade through a heart tattoo is mostly symbolic of a broken heart or someone who is a proud heartbreaker. It is a simple and minimalist design, but a common one nonetheless which a majority have on their arms. It is one of the most common tattoo designs that most high schoolers or college students get during the years they spend battling with their hormones. It can also have deeper and more layered meanings later on with experience and age which is why they are not removed most of the time and can be the subject of a good chat.

This is one of the most beautiful floral switchblade tattoos you can ever get for yourself with a personalised message. Despite being two contrary elements, a switchblade and a rose are allowed to coexist with each other. This tattoo has a very humbling effect with its beautiful and intricate design, minimalist typography as well as subtle black and white shading. It is elegant in its own minimalist way. The best place to get this tattoo is on your arms, calf muscles or thighs. It can be symbolic of a relationship where one is as sharp as a switchblade whereas the other is as soft as a rose.

A traditional switchblade tattoo is one of the most common first tattoo ideas that most teenagers get especially if they are cutting ties with their family and moving out once they are 18. While it can be quite a cliche idea because of how common it is, it should not be judged because it holds great meaning for whoever gets it. This one is a very common switchblade tattoo design with drops of blood. It also almost reminds me of the dagger scene from Shakespeare’s ‘Macbeth’. It is also open to interpretation from person to person. Many may love the design idea because they love knives and might want something minimal yet meaningful inked in their skin.

They say to save the best for the last and this black and white design switchblade eagle tattoo indeed takes the cake. This intricate and beautiful neck tattoo idea is bound to steal anybody’s thunder if someone walks in donning this design on their neck. Neck tattoos are not amongst very common tattoos, but people still do get them sometimes. This design will also look great on anybody’s back or chest with both a personal or a generic meaning too.

Switchblade tattoos can be a meaningful addition to your tattoo sleeve and can also be a great idea for your first tattoo if you are looking for a meaningful one. It is a generic tattoo idea with a great and deep meaning which people don’t generally regret having later on and may even have great stories to say about it as well.