101 Best Superman Tattoo Ideas You Have to See to Believe! 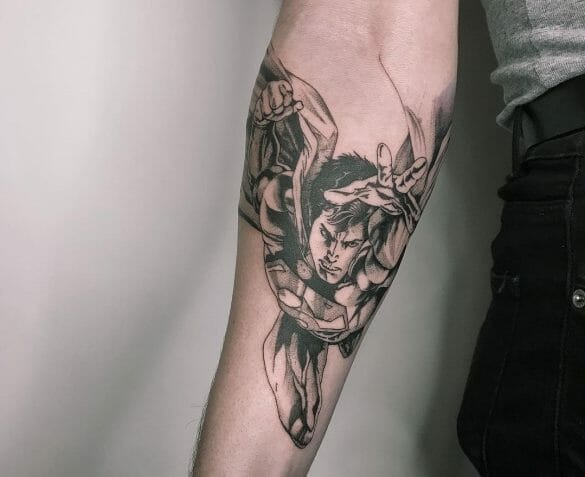 Looking for the best Superman tattoo ideas? You’ve come to the right place then! Find some of the best tattoos and designs right here!

Superman was created by Jerry Siegel and Joe Shuster in 1938 and has garnered a huge following in the world of DC superheroes and is often termed as the most popular superhero to date.

As most comics readers and moviegoers will know, the story follows Kal-El, who is given the name Clark Kent by the human couple who find him on Earth after Kal has seen sent to the planet by his parents as Krypton is destroyed. After growing up, Clark Kent takes up the mantle of Superman and spends his life protecting Earth from danger alone and with the help of other superheroes like Batman, Wonder Woman, The Flash, and others.

Tribal tattoo designs are one of the most popular tattoo forms and are known for their exotic patterns and abstract designs that are just badass to look at.

This superman tribal tattoo is one such instance that makes the best use of the flying man by adding it to the mix with the tribal design to change the basic style as it gives a new form to the design as it creates a mix of Superman logo tattoo designs and a small Superman tattoo to create the best rendition of the character in a tribal Superman tattoo design.

A Superman portrait tattoo like this design is best suited for the chest as it carries over to the arm to give the skin a solid look.

The Superman logo is as famous as logos can get and is the most renowned logo or symbol in the world of superheroes. As comic books and Superman movies have already made it clear, the Superman ‘S’ symbol is that of hope and perseverance and this tattoo will help you become more confident in day-to-day life.

This blackwork tattoo is among the few cool tattoo designs that add a dark tone to the character which the Man of Steel has been seen donning in certain DC Comics that have shown him in a darker tone.

If you are in the search of a different style of a Superman logo tattoo then this style will suit you. As usual, if you are not satisfied with the base design, feel free to ask your tattoo artist to change the placement site from the chest to the arm or leg or add Lois Lane, or another Justice League character to change the tattoo idea according to your preference.

What happens when baby Kal-El lands in Ukraine instead of Kansas? Well, you will know if you have watched the recently released Superman Red Son animated movie!

This cool superman tattoo makes use of the different approaches that movies like these bring in to change the hero as we know him and brings a twist to the story of the Man of Steel.

This Superman tattoo is badass to the core as it portrays a cool-looking silhouette of the hero as he watches on the futuristic landscape that lies in front of him. The use of colours like red and yellow give the tattoo a great look that is visually stunning to look at.

Superman tattoos like this design as best used as an upper arm tattoo but can also be inked on other parts of the body like the chest or the back.

Superman and Batman are two of the noteworthy heroes in the world of DC Comics and have had a soft spot for one another throughout their history. They are the founding members of the Justice League along with characters like Wonder Woman and Green Lantern to name a few.

This cool yet simple Superman tattoo is a great way to showcase the animosity of the two heroes that were pitched against each other in the comics as well as the Batman V Superman movie.

The tattoo brings together the Son of Krypton and the Caped Crusader in an attempt to create the perfect tribute that one can pay to these symbols of hope.

The logo behind the characters is the combination of their symbols but can also be altered to create a different approach to the Batman and Superman logos all the while serving as a great arm tattoo idea.

Single needle tattoo ideas feature mostly black work tattoo ideas and are created using the finest of fine lines which in turn creates a tattoo idea that is super thin and dainty with detailed pieces of information in the tattoo.

This simple and neat design is the perfect definition of a clean tattoo that you are pair with your already existing tattoos like the Batman tattoo, or you can pair it up with a simple cute lego Superman tattoo or marvel superheroes tattoos like the one below.

The Superman symbol is easy to recognize because of its popularity and has been at the center of the world of superhero tattoos ever since tattoos become popular.

This colourful tattoo is stunning to look at because of the perfect use of colours and the flawless representation of the Superman symbol.

Tattoos designs like this can be a great Superman tattoo for females and males as it makes good of the symbol to create a great tribute piece if you are looking to pay tribute to Superman.

You can also pair this with an already existing tattoo on your body like a DC comics tattoo or a Justice League tattoo, as well as add an extra element like the kryptonite to hype yourself up in the face of struggle.

Superman flying tattoo designs are a common rendition of the superhero and are often created as an imaginative piece that tries to do justice to the grace that Superman has to his character.

This tattoo is one such design that makes great use of the flying pose of the superhero and creates an aesthetic design that is neat and clean.

The colour work is on point with the portrait being flaunt-worthy! The cape shrouding the daily planet symbol adds a bit of realism to the tattoo as it makes use of Superman’s normal life as a journalist.

With the introduction of Zack Synder as the brains behind the Superman reboot, DC took on a dark approach to the superhero with Henry Cavill giving a great performance as the Man of Steel. The movie has a great number of fans who loved the dark approach and have used Superman tattoos like this to pay tribute to the hero.

This design takes inspiration from the Man of Steel series where Superman is shown to be using his heat ray to bring down General Zod and thus, creating a symbolic scene that has etched its way into the many Superman tattoos and ideas.

If you are someone who doesn’t like complicated tattoo designs, then this tattoo will be a perfect fit for you as it portrays Superman in a minimalistic way.

The tattoo drawing portrays Superman in his renowned taking-off pose as the hero prepares to take a flight to save the world from evil!

Designs like this are on the low-key since they don’t show off Superman’s figure properly and leave a sense of discovery, hence this can also be paired with a Black Superman tattoo.

This astonishing tattoo idea is one of the best Superman tattoos out there with its intricately designed portraits of the hero as well as a Superman symbol that is close to perfection with its usage of an embroidery-based style.

The hero is shown off striking three poses all around the symbol and is just stunning to look at! This tattoo is a guaranteed head-turner and will attract a lot of prying eyes!

What is the Superman tattoo?

The Superman tattoo is a classic and iconic body art symbol that originated from comic books in 1938. It features the red and blue “S” logo as part of the Superman suit, as well as a large cape draped around its back. This tattoo symbolizes strength, courage, and unwavering heroism for many people who choose to get this ink. It is also often paired with other superhero-inspired designs, such as the Batman logo or Captain America shield. Whether you are a fan of Superman or not, this tattoo can represent many different things to different people.

What makes the Superman tattoo so popular?

How much does the Superman tattoo cost?

The cost of a Superman tattoo will depend on various factors, such as the size, detail, and artist’s experience. Smaller pieces can range anywhere from $50 to $200, while larger tattoos can cost upwards of $500 or more. Additionally, some artists may charge extra for complex designs or use of vibrant colors. It’s best to discuss your budget with the artist beforehand to ensure you get the perfect tattoo.

How big should a Superman tattoo be?

The size of your Superman tattoo will ultimately depend on personal preference and the area in which you plan to get it. Smaller tattoos are usually better suited for more delicate areas, such as the wrists or ankles. If you want a larger tattoo, then consider getting it on the chest, arm, back, or thigh. It’s important to keep in mind that the size of your tattoo should be proportionate to the body part it is on. Consult with your artist for advice and guidance on choosing the perfect size for your Superman tattoo.