10 Best Sun Moon And Stars Tattoo Ideas You Have To See To Believe! 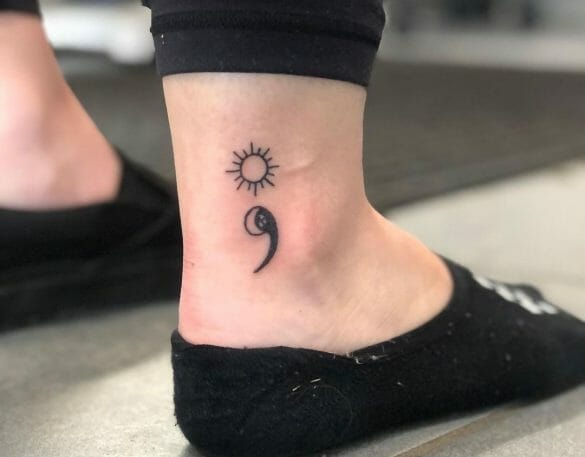 Looking for ‘Sun Moon and Stars’ tattoo? You’ve come to the right place. Here we have compiled some of our best picks just to suit your individual styles.

The sun, moon, and stars tattoo is a great combination for a beautiful tattoo if you are into astrology and cosmology.

Not only crescent moon designs but also stars and galaxies are great ideas to fuse in a cosmic tattoo. These designs take relatively longer tattoo sessions to be completed because they contain a lot of minute details.

The figure of sun and moon tattoo along with stars are very symbolic. These simple designs have the various in-depth meanings of the tribal sun, night sky, celestial body, full moon, etc. The reason why people are so fascinated by these designs. Also, due to their simplicity and natural beauty, these designs are loved by many women and various people of all ages. These designs can be executed as large as well as a tiny tattoo.

The moon and sun are the opposite forms of nature; one omits light whereas the other absorbs light. Such fascinations draw a huge audience to get moon tattoos and sun tattoos. Not to forget, stars are very well-loved among people. It represents hope and light in the form of beauty which inspires people. The tattoo artist mostly takes individual opinions into consideration because even though these designs are simple and almost the same thing, each individual has a different take on them. Some people only like the moon tattoo designs, some like the kissing sun design whereas most people like sun and moon tattoos combined topped with stars around them.

The sun, moon, and stars have a specific pattern on them. Most tattoo artists try to achieve the right texture to portray different meanings of a simple sun, crescent moon, and bold stars. These figures can be modified into various creative progress. These tattoos can be simple, mythical, spiritual, c0mical, etc.

My Sun And Moon

This sun and moon tattoo holds a very special place for mothers and also other women. This tattoo is very intimate yet homely. The details of the tattoo are remarkable. What makes this tattoo special is the facial features that have been executed so well. The tattoo artist has used various methods in drawing this design. He has used dark and light shading and also the most famous dot-like texture.

The sun and moon have been shown in a very glorious manner and they have been portrayed as if they are hugging each other. Surrounding the entire tattoo are a couple of stars hanging from the frame which gives it a very nice crisp detail.

Last but not least what makes this tattoo stand out from the rest is the name that is written under the figures. People can choose to write the names of people whom they love and admire since the tattoo symbolises love and care.

This tattoo is one of the most fun and exciting celestial tattoo. This tattoo is lovely due to its playfulness and cheerful appearance. There are various stars, a moon, a sun, and a planet surrounded by a wide range of colours.

The tattoo is although a little tiny but that gives it more of an edge since it can be placed on any part of the body and it will look incredible. Coming to the colour scheme that has been used in the tattoo, it is very exciting and unique.

The tattoo artist has not just filled colours inside the figures but has also used colours to make outlines and borders; to give shading effects; to create backgrounds and also to give motion-like direction and shine. The tattoo is more simple and comical which is good for people who like to get light tattoos. You should definitely give this a try.

The Dust Of Magic

This tattoo right here is our own Galaxy. The moon, the planets, the sun in the centre, the spaceship and various stars are being shown here in this tattoo. This tattoo is more mysterious and shaded rather than crisp and detailed.

However, the tattoo artist has made sincere efforts in drawing every dot in the best proportion that the tattoo needs. The size of each planet and sun and the moon on the top have been drawn accurately. If you see it closely the centre of the tattoo which looks like a cluster of dots is actually the focal point where the sun exists.

One of the most requested tattoo designs that we received is specifically for the palms and wrist region. Therefore this is the best tattoo that we could find to suit your individuality. This tattoo is an absolutely fun one. The tattoo artist has drawn the sun in the right bottom of the thumb finger.

The sun has been given a good spacious size and it has been shaded inside so that it gives it more depth. On the left side of the hand is the moon which is again shaded close to the outlines to make it look edgy. The moon tattoo has been drawn in its crescent form which is one of the most beautiful phases of the moon. Moon represents femininity. It adds charm to the solar system.

This tattoo design is very unique and none like others. In the extreme left we have the crescent moon, then next to it we have the star and as the palm keeps rotating we see that there are other celestial bodies that have been drawn here.

Continuing the star is the sun and then another planet. There has been a colour scheme that is going on in the tattoo. The tattoo artist has used shades of black and grey. The fact that the tattoo keeps on continuing as the palm is rotated, the tattoo gets more and more interesting to the person.

It is visually very aesthetic and fun. The gradient colours of black and white make the tattoo more special and basic rather than making it more loud and colourful. A good tattoo design for people who like creativity in the simplest manner.

This tattoo style is quite different from what we usually see. This tattoo is inspired by a very famous game known as ‘Cat’s Cradle’, where a string is used to make various figures using both hands. What is more stunning in this tattoo is the fact that the tattoo artist has combined that game into an intricate design using the figures of sun, moon, and stars.

The sun, moon, stars, and various other planets are being shown as if they are hanging on the strings that are being played by the hands. The design of the tattoo is very simple yet the inspiration of this and the execution of it makes it more worthy and fun. The details of the hands are very admirable. The tattoo artist has successfully executed to make the hands appear realistic.

Various stars, sun, moon, and other planets have been drawn in a very detailed manner. Overall the tattoo artist has used a simple jet black ink and has used thin lines to make this tattoo more elegant.

This monochromatic tattoo is loved by all. There is so much to look forward to in this tattoo. Not only are the details very crisp and clear but the entire design has been made in such a way that it looks chaotic. The top and bottom of the tattoo have been given a structure like that of a honeycomb which makes it more interesting and puzzled.

It appears as if the pieces are falling from the sky to the ground. There is a massive sun, earth, and the moon orbiting it. This entire tattoo is filled with lots of stars. However, this tattoo gives a clear picture of what the space actually looks like, which is more destructive.

We love how the tattoo artist has used only black and shades of light and dark black to make everything look so realistic and to add depth to the figures of the tattoo. Each figure has been detailed very sharply and when everything has been put together it looks like a real space.

Another remarkable and proud tattoo design that we have selected for you is this one. The colour scheme used in the tattoo is splendid and adds punch and creativity and makes it more artistic. In the very right corner, we see that there is a massive red hot burning sun. On the extreme left, we see the moon with its pale shade of light.

Looking closely you will notice that in this tattoo the stars have been astronomically arranged in various shapes. Every person can choose their specific astrological star sign to portray in the tattoo that they choose. The colours of the star figures are blue, giving it enough emphasis in this tattoo.

The background of the tattoo is outer space which is black, red, and purple. The fact that this tattoo has been continued from one shoulder to the middle of the back and has been left open-endedly makes it more interesting and fun to look at. It is complete in its own way and is none like other.

One of our most popular tattoo designs is the shoulder patch. In this tattoo, the color scheme has been portrayed very brightly. The background of the tattoo is outer space which comprises the Milky Way on the top, then the sun in the center, and then the moon at the bottom.

The motion of the Milky Way has been portrayed beautifully as it appears to be rotating which makes it realistic. The sun has been given a good thought and execution, as the brightness that it exhibits is just perfect.

The moon is appearing as if the bottom portion of it is crumbling down which makes it very artistic. The approach towards the tattoo is to bring fantasy into reality. The colours used in the tattoo are very apt and complementary to each other.

The Universe Of Water-Colours

Last but not the least, we have selected a design that is very colourful and very aesthetic to the eyes. Each element in this tattoo has been executed with utmost detail. There is the Milky Way, various planets, the sun, the moon, the meteors, stars etc. The celestial bodies that have been drawn in the tattoo are many in number which makes this tattoo more realistic.

The colour approach that has been taken towards the tattoo is remarkable. Each element has been given good details and apt colours to express them. Overall if you look closely, you will find that the background of this tattoo has been made in a shaded way which gives it a water colour styled effect.

It is very unique and the shades that have been used are blending very well into each other which is bringing out more beauty in the tattoo. The entire tattoo has been filled with stars and blings to give it the right Bunch of glitters that this tattoo needs.

If you’ve not found the right design that suits your style then here are some other options for you to choose from.