101 Best Stomach Tattoo Men Ideas That Will Blow Your Mind! 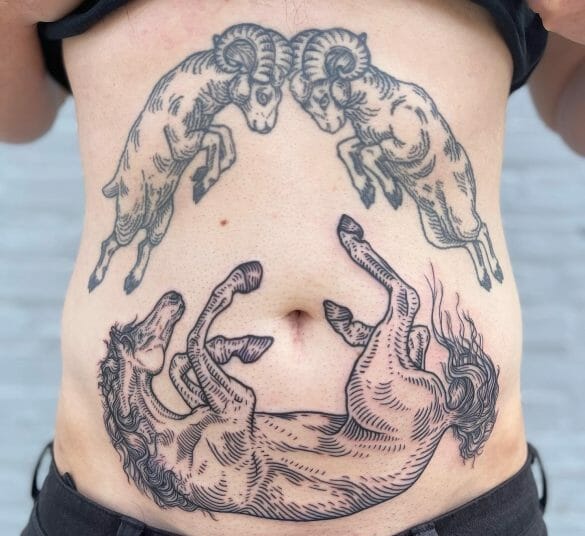 Are you looking for stomach tattoo men ideas? Here is a list of best stomach tattoos for men that you will definitely fall in love with,

Stomach tattoos are a great variety of tattoo options.

The stomach offers a lot of space for tattoos. This makes the stomach an awesome area to get large-sized and well-detailed tattoos.

Men’s tattoos are usually well-detailed and with extensive shading. Some of the usual places for men’s tattoos are hip bones, upper body, chest, stomach, etc. Men love getting tattoos that have good detail and which make their bodies look good in appearance. Stomach tattoos are great as they help guys to many times cover stretch marks and other imperfections in their appearance. When a former fat person goes through any weight reduction process and gets into a new shape after a long time, he/she usually gets certain marks on their abdomen region. In such times good stomach tattoos can be their savior helping them out of a crucial and sensitive situation by literally taking care of their vulnerabilities.

A Jesus tattoo on the stomach, just above the belly button. The tattoo is done using black and grey, using the skin as the base for the tattoo. Jesus is looking upwards with his mouth gaping and there is a distressed expression on his face. He is wearing a crown of leaves and thorns. A tattoo extending from the face to the neck of Jesus is drawn and the tattoo ends with a circular curve towards the neck. The tattoo above Jesus is of a heart with four daggers on one side and a bunch of roses wrapping the heart in a linear line. A few blood drops oozing out of the bleeding heart extending to the center of the Jesus tattoo. Whether or not you want to incorporate the heart design in your tattoo alongside Jesus is your individual choice.

This is an owl tattoo done right above the belly button. The entire tattoo has been outlined with a thin fine black line. Every feather of the bird has been shown with great detailing and the shading is meticulously done. The tattoo design has the letterings above the owl, ‘Better to speak than die’ in Roman style. There is a branch with two leaves on opposite sides and a central round fruit attached to it, drawn near the back of the owl. A crescent moon also accompanies this branch. Owls are nocturnal creatures and this owl tattoo is perfect for anyone who can vibe with this unique creature.

This is a trippy tattoo consisting of an eagle and a snake. The eagle is in attack position and on its way to catching its prey. The snake looks in a defensive position, aggressively waiting to fight for its own life. There is a rising sun-like structure, inked with orange and black, in the background of the eagle, visible on three sides of the eagle.

The emotions and nature of both the animals in this hunting scene are very well depicted in this tattoo. The color combination used is trippy and brings a jolly vibe to the tattoo. The tattoo extends from the upper stomach to the lower belly, below the belly button. If anyone is looking for a full stomach tattoo design, they should go for this tattoo.

The first image is of a horseshoe magnet tattoo that has the label ‘never lucky’ attached to it. The tattoo is done on the side of the lower stomach. The entire tattoo is done with black ink and there are patterns drawn at the body of the magnet with darkened edges.

The second tattoo is of two hands holding each other in shake hand style. The tattoo is very simple and is done on the side of the upper region of the stomach. The two tattoos are done on opposite sides. This tattoo is done with dark black ink and has a thick-lined outline.

Both tattoos are simple but independent designs. One can do these tattoos separately as given in the images or they can ask their tattoo artists to find a way to incorporate the two designs into a single tattoo.

Dancing In A Ring Stomach Tattoo

This is a side stomach tattoo where a group of four girls or angles are dancing by holding each other’s hands, making a circular ring. Each girl is holding a different posture and each posture is looking equally elegant. This magnificent tattoo symbolizes woman of the previous generation and their elegance and beauty.

The tattoo is outlined with thin lines with minimum shading while the skin is used as the base of the tattoo. The tattoo is of a reasonable size and covers the entire side stomach. If you are a lover of classics, then this free spirit, simple yet elegant classic tattoo is the perfect choice for you.

This is a stomach sick tattoo that covers the entire stomach including parts of the belly button. This is a tattoo of the scenery in New York City, including buildings in the background, The Brooklyn Bridge on the East River, and also the Statue of Liberty with a twist. The tattoo is down with great caution, including the details of aircraft, ships, and clouds. The tattoo is done in three-dimension making it look very realistic.

This is a really good cover-up stomach tattoo. The shading is extensive and detailed. This tattoo is best for people who have had tattoos before because this tattoo covers a huge amount of skin and thus the person needs to have a good amount of pain tolerance. If you are a Newyoker or someone who loves the city, this tattoo is a cherry on the top coverup tattoo design for you.

In this tattoo design, there is a little fairy with a rifle in hand and she is in a ready-to-attack position, aiming with the rifle. The tattoo design also includes the number 1997 inked at the center of the stomach. The number is of sizeable font and it is outlined but has no shading. The fairy is drawn at the side of the stomach below the number font.

The fairy is adorning a red dress and has a pair of cute little outstretched wings at the back. The entire tattoo otherwise is done in black. The overall tattoo is very simple and can be done by anyone. One can change the number according to their wish or can omit it as well.

Eyes In A Circle Tattoo

This is a tattoo of six eyes drawn in a circle. Two eyes have some sort of message inked at the inner circle while the other four eyes have a similar fire ball-like design at the center. This is an innovative tattoo design done with the belly button as the center. The two eyes with messages were done earlier and the other four eyes were added later. If you like the design but aren’t willing to go for all the pieces, you can go for the two-eye combination. Otherwise, you can get the entire tattoo tattooed in the stomach area.

This is a Traditional Japanese mask tattoo design done on the abdomen of a man. Japanese women love masks and this tattoo is a symbol of that. The tattoo has a woman’s face, staring with a look of disgust, and also has a dagger going through her face. The design also has a rope with a bookmark attached to it. The shading is precise and detailed and the tattoo extends all over the stomach. This is a perfect tattoo for someone who is looking for a traditional-style men’s stomach tattoo.

This fine line tattoo is an innovative and creative tattoo idea. Though it does not symbolize one thing distinctly, it represents many cultures in a perfect way. The tattoo is done on the middle stomach and has minimum shading. The design looks like it came directly out of a fairy tale which makes it a real treat to the eyes. Though the collective look of the tattoo suggests it to be a skeletal head, it is actually a tiny landmass with strange thick branches of trees. The branches have a spider hanging from its cobweb on one side and three hearts hanging on the other side. There are mushrooms and other herbs on the landmass, that in this tattoo, look like a part of the landmass itself. If you are looking for a tattoo that represents art and is a little different from the rest of the tattoo designs, this is the perfect tattoo for you.

If you are willing to discover more, here are a few other related tattoo ideas you can have a look at-

Male Tattoos On The Abdomen

What are stomach tattoos for men?

There are a number of different reasons why men might get stomach tattoos. For some, it may be a way to show off their muscles or body type. Others may use it as a form of self-expression or as a way to attract attention from the opposite sex. Whatever the reason, stomach tattoos for men can be quite striking and can really make a statement.

What are the benefits of stomach tattoos for men?

How can I cover up my stomach tattoo?

If you’re not ready to show off your stomach tattoo to the world, there are a few ways that you can cover it up. One option is to wear clothing that covers the stomach area. This includes shirts, tank tops, and even bathing suits. Another option is to use make-up to cover up the tattoo. This can be done by using a foundation that is one or two shades darker than your skin tone. Finally, you can also get a temporary tattoo that will last for a few days or weeks. This can be a great way to test out a design before you commit to it permanently.

How do I care for my stomach tattoo for men?

After you get your stomach tattoo, it’s important to take care of it properly. This includes keeping the area clean and dry. You should also avoid scratching or picking at the tattoo. If you do this, it could cause the tattoo to become infected. Finally, you should avoid exposure to the sun for long periods of time.