10 Best Statue Of Liberty Tattoo Ideas You Have To See To Believe! 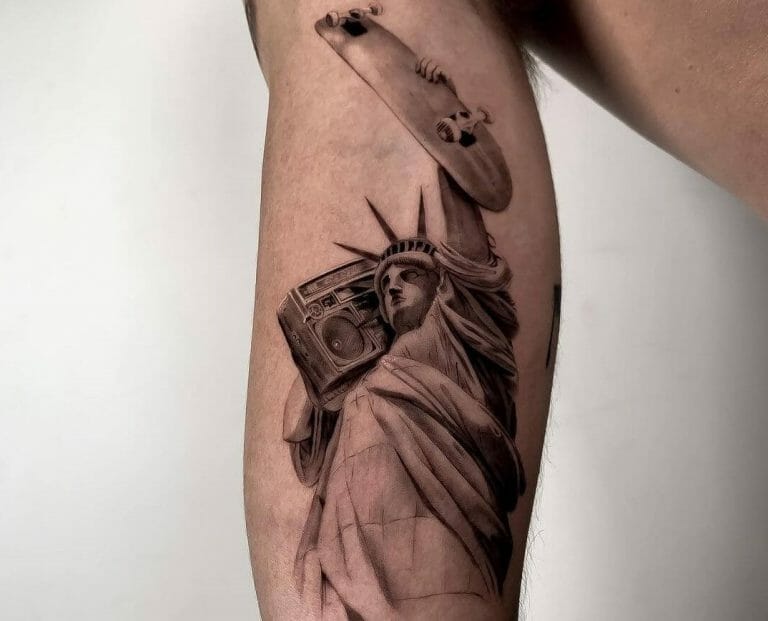 Though uncommon, monument tattoos are becoming a trend these days.

The Statue of Liberty, also known as Liberty Enlightening the World, was a gift from the French nation to the United States that stands tall on Liberty Island, in New York City. The statue is a figure of the Roman goddess of freedom, Libertas (who was worshipped by freed slaves). The Lady Liberty mainly stands for hope, freedom, justice and friendship (between France and the USA). The torchlight that she is upholding in her right hand symbolizes enlightenment, the 25 windows of the crown on the Statue of Liberty head represent the gemstones of the earth and the 7 spikes are said to represent either the seven oceans or the seven continents. The tablet she holds in her left hand is inscribed with the date of the American Declaration of Independence in Roman numerals, whereas, the sandals with broken chains around her ankles represent breaking free from tyranny. Hence, a Statue of Liberty tattoo could mean everything the actual statue itself portrays. Here are 10 amazing Statue of Liberty tattoo designs you will absolutely want to get inked:

Statue Of Liberty And NYC Tattoo

Statue of Liberty tattoos often has the New York Skyline or/and other American monuments. Adding other elements like the flag, the bald eagle, and important buildings to the Lady Liberty tattoo not only increases its beauty but also adds up to the symbolism of the tattoo. This tattoo design is an exceptional inspiration for immigrants who arrive in America to pursue their dreams and holds up a classic image of Americanism.

The American flag always goes well with Statue of Liberty tattoos. Lady Liberty tattoos and United States Flag tattoos uphold a sense of patriotism and nationalism. This tattoo would be a perfect fit for any person who feels strongly for the country and its culture. Recreating this realistic, intricate tattoo might be difficult but not as much as sculpting the actual statue. This Statue of Liberty tattoo design will only require a set of experienced hands and some dedication.

One can look at this as a Statue of Liberty tattoo meaning freedom and justice, but there is much more to it than just that. A bridge tattoo is usually a symbol and inspiration for the journey of life. But this Lady Liberty and Brooklyn Bridge tattoo is a collective symbol of a pathway to American opportunities, i.e. the scopes that the land of dreams provides to its citizens or even immigrants. For this dark ink Statue tattoo, the forearm, calf or upper arm of any skin complexion will be suitable.

Even though some people choose to believe in the idea that anarchy is an extended version of liberty, a lot of people don’t. To the latter, the anarchy that leads to entropy is what is capable of belittling the entire history of American liberty. And this tattoo of the Statue crying in the hands of anarchy and entropy captures that essence really well. If your views on this topic are as strong as this tattoo, then you would not regret going for this one.

This one is a great tattoo depicting Lady Liberty’s fight against the three heads that represent repression and its friends, injustice, and pessimism. The skeleton figures give the tattoo a spooky, zombie-like flavour. If your opinion matches that of the tattoo, wait no more. All you need to do now is look for good artists and get started with the procedure.

The Statue of Liberty and Empire State Building Tattoo

The Statue of Liberty and the Empire State Building from New York City are both powerful symbols of Americanism. If your love for NYC or America is as great as this tattoo, not choosing this one would be a waste of a good opportunity to upgrade your appearance with this amazing forearm tattoo.

Tattoos of the Statue of Liberty and elements such as the country flag express and stand for freedom from oppression and independence. This tattoo design is an extremely intricate and classy one. If your love for America or your hatred against tyranny is real, what could be better than this sleeve tattoo? With some light and dark ink shading done with expertise, this tattoo will look super cool.

This tattoo of Lady Liberty’s skeleton is symbolic of the slow death of liberalism. It is one creative tattoo depicting the murder of everything that the Statue represents in the hands of new-age tyrants. The minute detailing in this greyscale tattoo demands some effort from a skilled artist and some care from the bearer for it to heal.

This colourful tattoo is another variant of some of the other tattoos you saw on the list. This artwork is a powerful metaphor for freedom, desire and equity. The colours and the black and white shading are the features that bring out the essence of the tattoo. Hence, spending some money to get this inked on your forearm or calf would not be a very bad choice after all.

Last but not the least, this two-faced Statue of Liberty portrays the good and bad sides of Americanism. This greyscale tattoo would suit anyone regardless of gender, age, or race. With a few sessions of tattooing, the results will be dope.

We believe you have enjoyed going through our list of Statue of Liberty tattoos. By now, you should be able to choose or personalise one for yourself. The Statue tattoos are a great option that will stick out among a bunch of other ones. If you still have not been able to make up your mind but are sure about getting the Statue inked, here are a few more designs that you might wanna lookup: