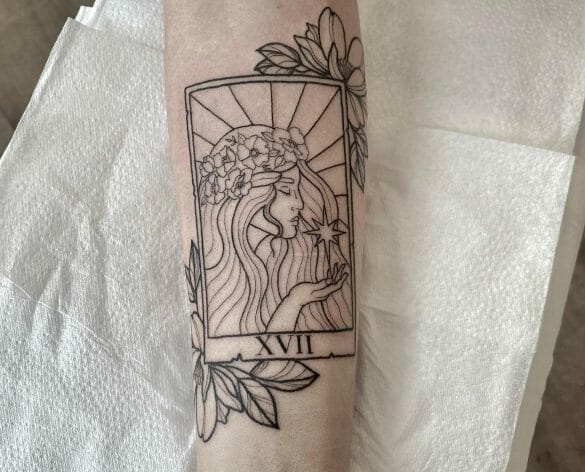 Do you need a tattoo to signify your strength, power and gratitude? Check out the star tarot tattoo ideas to harness your inner self!

Tarot card tattoo ideas are so much in fashion these days.

Tarot card tattoos are a way to celebrate one’s connection with the spiritual world. The Star tarot card is a Strength card which signifies the importance of hope and faith in one’s life.

Belonging to the major arcana tarot deck, the star tarot card represents new beginnings, inspiration, hope, courage and better meanings for the future. The star tarot card tattoo is much more than just a fashion statement nowadays. This tattoo beholds the message of one’s sense of hope and optimism. Tarot cards have an individualistic approach to the happenings in a person’s life, slightly different from traditional astrology. People often use tarot cards for better insight and understanding of their personal growth and connection to the universe.

The stars in the star tarot card act as a guiding light for an individual in need of positive affirmations. The beautiful lady surrounded by the seven stars depicts the meaning of the seven chakras. A Star tarot in reading reflects the change of a person in a positive direction after a great loss and suffering in reality. The power sign suggests exciting opportunities awaiting in the future. The star tarot brings out a sense of serenity, tranquillity and gratitude toward the universe

Tattoos are a way to reflect one’s personality. Tarot card tattoos go way back to the 19th century. The moon card, star, justice card, the lovers, and the court cards are some of the common tattoos having different life symbolism. The star tattoo tarot designs are an absolute bliss to look at. Pertaining to its connection to intuition, individuals with a powerful sense of spirituality can very well have a Star tarot card tattoo to celebrate their journey.

The traditional Star Tarot Card Tattoo is majestic and one of a kind. This simple upright tattoo depicts the divine and pure energy that is being welcomed. It symbolises the person has gone through a lot of suffering and is finally free of all the limited thoughts. The upright deck card signifies good fortune and a deep astral connection with the light.

The simple design honours the originality and imparts the message of traditional beliefs. The plants around her behold the fertility symbolism. There are two containers in her hand, of which she pours water into a stream to replenish the earth and keep the life cycle going. She pours the other container onto the dry land which splits into five rivulets, depicting the five senses of the mortal world.

Tattoo is all about art and experimenting with traditional ideas. This beautiful tattoo design is a digression of the traditional idea. The black sketch is simple yet so elegant to look at. The damsel is the embodiment of hope and positivity.

The seven stars depict the seven chakras in the body and the perfect alignment of the stars imparts the meaning of balance. The big star symbolises the guiding light. Anyone in search of a simple yet elegant star tattoo can go for it without a second thought

This beautiful Star Tarot Tattoo is indeed a huge one. People who would love to experiment with the big tattoo can go for it. This star tarot tattoo has a similarity to the Rider Waite deck of tarots.

The woman depicted here is clothed, which is a speciality of the new age deck. The trees, vegetation and the birds around her depicts fertility. The water pitcher depicts the cycle of life. The details of this tattoo are truly mesmerizing.

This Etsy inspired card tattoo is extremely intricate and unique. Paired with the temperance tarot card, this star design is perfect for your shoulders or thighs.

The black ink detailing is stunning and the traditional idea is being depicted with perfection. The lady in the card is seen holding two water pitchers pouring into a stream, which imparts the traditional meaning. This design can be flaunted by anyone.

The Unicorn and Stars

A Tarot card tattoo doesn’t necessarily mean it has to be simple and monochromatic. This colourful star tarot tattoo is extremely cute and stunning. The idea of a Unicorn in the setting immediately captures the attention. This beautiful tattoo has magical colours, favourite for girls. The blue hue is serene to look at.

Though this tattoo does not follow the traditional ideas, what’s the harm in being experimental? As a matter of fact, this tattoo is ideal for women who are self-dependent and self-sufficient. Digressing from the originality depicts a powerful and independent spiritual connection in their own way.

The beautiful tattoo is ideal for women. The simple and light design is perfect for any age. The blank background with the eight distinctive stars really brings out the meanings of the images. The small bird is a nice touch to reflect the subject matter. This in fact is one of the traditional ink art with the highest number of reviews.

According to traditional astrology and numerology, people with the zodiac sign Aquarius belong to the Star Tarot family. Rooting to the traditional tarot card design, this Aquarius tarot tattoo has almost the same elements. The seven stars depict the seven chakras in a human, and the big star depicts guidance.

This ink work is simple yet so unique with the subtle details depicting the journey of life. This unisex tattoo can be flaunted on any part of the body.

Heavily inspired by the death Eater tattoo designs, this unique tattoo is one of a kind in the star tarot designs. The skulled woman with a rogue veil adds a gothic tinge to the whole tattoo. The accurate detailing in this tattoo is worth mentioning too. The skeletal frame really adds to the twist in the idea. Such a unique tattoo demands a good place indeed. The arm and the legs can be a great canvas for this fun work of art.

This unique tattoo design is heavily inspired by the Wiccan tattoos. The floral detailing at the edge with the single hand is a beautiful concept mingling with the original ideas. The seven stars are perfectly aligned with the guiding star here.

This unisex tattoo tarot is bound to charm anyone. So if anyone is looking for an intricate floral design with star tarot elements, this tattoo can be a wonderful option in the store.

Women, as the symbol of womanhood, a fresh start and fertility are the main attraction of this Yggdrasil tattoo. All of the elements are subtly connected to pay tribute to the traditional tarot card. With the gradient shading on the dark corners of the stars and the intricate floral and leaf designs on the figure, this tattoo highlights the beautiful elements. This tattoo can be a great option for both men and women.

From a death tarot card tattoo to the lovers’ tarot card tattoo, the options in the major arcana deck cards are endless. Perfect for the people born with an air element, the star tarot card symbolises intuition, inner resources and the ability to harness one’s inner voice. Each star in the tarot card depicts different meanings. They can depict a welcome respite at the moment, upward progress in a career or a new beginning in love and relationships. The star is one of the Major Arcana Cards to completely dominate any reading as it appears. A star tarot helps a human being be aware of the renewed faith, hope and positivity in the future. As a member of the eight of coins tattoo tarot, the star brings in additional insight, intuition and access to one’s spiritual being.’

Almost all the cards can be turned into different works of art. Tattoos are a way to showcase one’s uniqueness. The art of the Tattoo has been prevailing for a long time. From being used as a sign of status to just flaunting the ink art, the history of tattoos has come a long way. Rooting back to ancient times, tattoos were used as mere communication tools by the ancient Greeks.

Tattoos nowadays have a deeper meaning with the wearer’s self-expression. And what can be better than adding a little bit of you to it? This ink art is so much more than just booklet ideas. Some parts of the world still signify tattoos as a manifestation of their self-identity. One can very well ask a professional tattoo artist to curate something unique, something new for themselves. And as far as tarot card tattoo ideas are concerned, any card can make a great tattoo. A little deviation from booklet ideas and a little search can result in some amazing ink arts. Some more ideas to put these reading cards on the body are :