101 Best Stag Tattoo Ideas You Have to See to Believe! 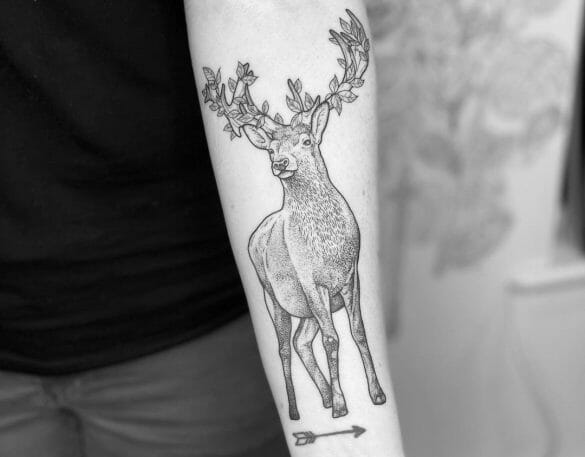 Looking for stag tattoo ideas to ink on yourself? Find the best stag tattoos, deer skull, deer tattoo design, and much more right here on this list compiled by us!

Deers are one of nature’s most majestic creatures and the genders are divided into doe (female) and the stag (male).

Throughout history, stags have been a part of art and have come in many shapes, sizes, and styles in various collections of old and new art styles. These animals are known as the King of the forest and can represent fertility, beauty, and intelligence among various other symbols.

In Native American culture, the deer is believed to be the messenger of God as it is connected to nature and is a symbol of power and wisdom too. In various cultures, these animals have meanings to their existence and carry a positive approach to life. With the rise in popularity of tattoo art, tattoos with meaning have become quite a thing of beauty and have incorporated various animals that are part of the forest and nature in general. Stag tattoos have become one of the most popular deer tattoo designs and continue to grow as they are stunning to look at!

Harry Potter is one of the most famous pieces of literature that has made its way to the mainstream media and has cemented its position as one of the best fantasy stories in recent years.

In the world of Harry Potter, a Patronus is an advanced form of magic that most experienced wizards struggle with. However, as we already know, Harry is the youngest wizard to summon a Patronus, and it took the form of a beautiful stag when it appeared to save Harry from the Dementors.

This beautiful stag tattoo pays tribute to the Patronus symbol by showing off a stag with grace and style.

Geometric tattoos have gained popularity over the years and are full of grace as they determine the growth of the tattooing prowess of artists.

This geometric stag tattoo design incorporates a beautifully created portrait of the stag and frames it within flowers to give the stag tattoo an artistic appeal.

If you already have a collection of animal tattoos on your body then this cute stag tattoo will be a perfect addition to your tattoos. As usual, tattoos are flexible which means you can change the placement of this tattoo from the legs to other parts of your body.

The stag head tattoo design is one of the most popular ideas that are based on the animal, and in most cases, the shape and design of such tattoos are often fierce to look at.

This stag tattoo adds a dark tone to the animal and creates a design that oozes power. Tattoos like this are often preferred by hunters who use this tattoo style to remember their past hunt by putting it on their skin.

If you are one of the hunters, you can get this tattoo inked on yourself to mark an important moment in your life, or you can add a doe tattoo on your shoulder, leg, or neck to keep this badass tattoo company.

The full-sized style of tattoos is used to bring out the best of the design of the stags by using the animal in all its grace.

This full-sized stag tattoo incorporates nature into the body by creating a tattoo that shows off the stag in all its glory with trees, the sun, and a mountain in the background.

The shading is top-notch, and you can add your meaning to the tattoo by adding your ideas to the design to create your rendition of such stag tattoos.

Stag tattoos are often created in a way that makes them feel closer to nature as they are seen as a docile animal that minds its own business in the wild.

However, you can put your twist to the tattoo, just like this tattoo that creates a fierce stag design that portrays the ideas of how aggressive these animals can become when they are angry!

Stag tattoos like this design can also be used as a Celtic stag tattoo to show their symbolism in the Celtic culture.

Skulls tattoos are badass in themselves and are often inked by people who have fierce personalities and want to give meaning to said personality.

A stag tattoo like this design will fulfil your need for a badass-looking tattoo that you can flaunt with or without getting too much into the meaning hiding behind the designs and can be a great addition if you are already sporting a deer skull tattoo.

You can add the sun or the moon as the backdrop of this tattoo to give it a better look, or can add more antlers to make it even more badass.

The stag is known as the protector of the forest as it is considered to be the ruler. These animals have been part of legends in several cultures in Europe, like in Celtic culture, where they are portrayed as all-seeing.

This tattoo makes use of the Celtic legends of the stag being the ruler and adds a certain magical element to it with its unique design with the crescent moon adding a mysterious aura to this stag or deer tattoo design.

Neo-traditional tattoos are a popular choice among people who want to get a tattoo inked on their bodies that is aesthetic to look at and portray rich in detail tattoo designs.

Designs like this tattoo make the best use of the art style with intricate detailing and a well-thought-out portrait as we can see in this tattoo.

The stag is the focus tattoos like these and in this case, the antlers house acorns with hunting shed above it. The use of colours on the antlers, house, and the face of the stag makes this design a guaranteed head-turner.

Realistic or 3D tattoo designs have become a part of the ever-growing business of tattoos by making an impression on the tattoo world with the use of realistic shading and portraits that give the designs a life-like feeling.

This tattoo might look simple in simple in design, but it shows off a great deal of detail that has gone into its creation. The stag portrait is lifelike and it is held in place with minute vegetation around it to portray the creature in its natural habitat.

As usual, we have saved the best for last! This stunning tattoo is an amazing example of how the art nouveau designs have made a huge impact in the tattoo industry as it creates a design that is visually stunning and is full of small elements that are just pretty to look at.

The stag is the focus of the design and it is surrounded by intricately created flowers, leaves, and jewellery that gives this stag tattoo meaning and brings it closer to its symbolism of fertility, grace, and spiritual enlightenment.

Here are some recommendations that are similar to these tattoos