101 Best SPQR Tattoo Ideas You Have To See To Believe! 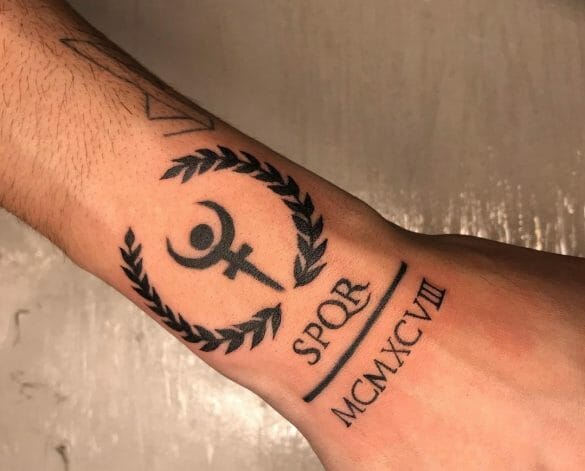 Channel your inner warrior by getting an epic SPQR tattoo. Find the 10 best ancient Roman SPQR tattoos, curated just for you!

One of the most powerful civilizations in history, the ancient Roman republic had an official seal that contained the letters SPQR.

SPQR is an abbreviation for Senatus Populusque Romanus, meaning The Roman Senate and People. The seal was found everywhere, including curries, public buildings, and documents published by the government.

The SPQR branding is a symbol of pride. Roman soldiers and gladiators wore SPQR tattoos to distinguish themselves from others. The SPQR mark set aside a Roman from a barbarian. Even the slaves of the roman republic were branded with SPQR to distinguish them from other slaves. Tattooing was practiced in ancient Rome but SPQR was not a common tattoo among the soldiers, in-fact it was a symbol for the masses that was politically used when required.

Nowadays, SPQR tattoos are in demand as Percy Jackson spread the iconic seal throughout pop culture. In Camp Jupiter, the symbol was burnt on a full member’s body as a permanent mark. We tried to figure out the SPQR tattoo, what does it mean and the answer is that it represents pride and honor and is also a mark of a toughened warrior. It is also popular among white supremacists, white nationalists, neo-nazis, and other hate groups that portray themselves as warriors for a noble cause. You can use SPQR tattoos to send a message about fighting against social issues, or political battles in general. Such tattoos are a great way to get something stylish and meaningful at the same time.

The Wolf And SPQR Tattoo Sleeve

This tattoo features the iconic motto of the Roman republic. It features a gladiator, who were ancient Roman fighters who fought against men or animals to entertain the king, standing in front of a colosseum wielding a sword. This tattoo sleeve will definitely inspire a lot of folks to get tattooed. We can also find a portrait of a wolf, which is also seen as a symbol of the Roman Republic. Wolves also signify family, friendship, and courage. These values were an integral part of the Romans. This makes it a badass and meaningful SPQR tattoo for everyone.

The Tattoo of Roman Army Armor

This upper arm tattoo features a metallic shield with the letters SPQR on it. The shield also features a roman helmet and swords. The Roman army was one of the most powerful armies in the ancient world. The shading work is immaculate, as the surface of the shield and the edges look realistic. The SPQR motto features on the shield as well. It was probably inspired by actual shields carried by the soldiers of Rome. This Roman SPQR tattoo idea is great as a medium-sized arm tattoo.

Senatus Populusque Romanus means “The Senate and People of Rome” was the motto in ancient Rome. The abbreviation itself holds a lot of gravity to it. If you are looking to keep things simple, this is one of the cleanest SPQR tattoo designs for you. Such tattoos keep the subject in focus without having too many elements. This idea of SPQR written in bold is simple to execute and would make sense for both minimalist enthusiasts and tattoo beginners. Of course, the font and the style can be changed by discussing with your tattoo artist. A really powerful and minimalistic tattoo in this list of SPQR tattoos.

The Portrait Of Hercules Tattoo

Channel your inner Mary Beard and get this stunning paneled portrait tattoo of Hercules, the fabled hero of the Roman State. His popularity in Rome and the world is unmatched. His strength and status as the protector of Rome makes him a figure worthy of a tattoo. Here we have a statue of Hercules inked on the client’s skin. The artist has put in a lot of practice and mastered his craft. You can see the amazing work and details which give this tattoo life. Hercules stands for everything that the SPQR motto stands for and you can definitely add the initials around the tattoo if you want. If you want to get Roman tattoos, SPQR tattoo designs surely should make the cut.

The Tattoo Of The Great Dictator

How can you discuss Rome and not mention Julius Caesar? The great dictator was critical in the demolition of the Roman Republic which gave way for the Roman Empire. He was immortalized by Shakespeare in his play, Julius Caesar. Caesar led Rome to victory in the Gallic Wars and was a mighty and powerful leader. Tattooing statues is really difficult and is a separate art form in itself. A mighty contender for an SPQR tattoo idea, you can add the initials or the entire phrase “Senatus Populusque Romanus” below Caesar for a truly magnificent sleeve SPQR tattoo.

Rick Riordan was responsible for one of the biggest storms in pop culture, as he fused teen drama with Greek/Roman mythology. The Percy Jackson books have been international bestsellers and they also gave way to a movie series. We get to see the logo in this SPQR tattoo, Percy Jackson and the Olympians. At Camp Jupiter, the SPQR logo was branded on the skin of the members along with lines that indicate the number of years that the member has spent in the camp. Getting this tattoo means you are a hardcore fan of Percy Jackson and it is also one of the simplest SPQR tattoo designs out there.

We have all seen and loved the iconic armor of Roman soldiers. They were the backbone of their formidable legion and the reason why Rome was a feared state. The Roman people were really proud of their warriors and gladiators. This is a tattoo that shows a full view of a Roman soldier wielding a javelin. The SPQR motto can be added in the background with the other texts. You can even add the Roman flag with the other motifs. This is not a big tattoo and surely can be considered by someone who doesn’t want a large tattoo on their body.

The Back Tattoo of A Gladiator

Show off your courage by getting this magnificent back tattoo of a gladiator arena. For SPQR tattoo, gladiator tattoo ideas are perfect as they are iconic and look badass. This gladiator is fighting a lion in what seems to be the colosseum. The moment is captured perfectly and the posture and other details are well taken care of. Making tattoos is hard work and it surely pays off if the result is this magnificent. The Emperor of Rome and the gladiator can also be seen overwatching the battle. The details in the tattoo are on point and it is a treat to look at. SPQR stands for the valor and grandeur of Rome and the Roman legion, and this tattoo idea shows exactly that.

This is one of the cutest and smallest SPQR tattoo designs on this list. It’s a stained glass-style tattoo of the colosseum. The sun rising in the background signifies the dawn of a new day, and together with the colosseum, it signifies strength as the colosseum has stood the test of time. We are in love with the color selection, how the orange and yellow blend together. The SPQR logo is seen on top of the tattoo. We also have a Lilly flower at the bottom which is the symbol of purity. In the past, Roman people dressed brides with Lillies to signify a pure and amazing life. This is a cute and colorful stained glass art style SPQR tattoo, and such tattoos are perfect for newbies.

The Portrait of Maximus Tattoo

Gladiator is one of the most iconic movies ever made in Hollywood. Maximus, played by Russell Crowe, is a character that has been inscribed in our hearts forever. In this SPQR tattoo, Maximus is seen wearing a helmet with a fierce and determined look on his face. This is also like the roman soldier tattoo (SPQR), that we have mentioned earlier in this list. Although a fictional character, Maximus won the hearts of Romans and others around the world. This is a great tattoo to get on your body if you are a fan of the epic movie. This is a sleeve SPQR tattoo, meaning it will require a significant amount of space and time so make sure you are mentally and physically prepared.

When you think of Rome, you automatically think of powerful figures, magnificent architecture, and a legacy that transcends history. The Roman republic was truly one of the most amazing civilizations on earth. Getting a classy tattoo inspired by ancient Rome would make you feel like a king. SPQR was the motto of Roman society and it holds a special meaning when used in a Roman empire tattoo. Hope this curated list eased your decision-making process and made you content on getting the SPQR tattoo of your dreams.

What is SPQR tattoo?

SPQR tattoos are a popular type of body art that feature the Roman Empire’s famous motto, Senatus Populusque Romanus. SPQR stands for “The Senate and People of Rome,” representing the city-state’s official name and its citizens. The phrase is often seen on flags, banners, and coins from the Roman Empire, as well as in historical documents. SPQR tattoos typically feature the words “SPQR” surrounded by laurel branches or a stylized eagle. Some designs also include symbols such as wolves, eagles, swords, and shields to represent Rome’s strength and power. The popularity of SPQR tattoos stems from the deep reverence for Roman culture and its long-standing legacy. For many people, the tattoo is a way of connecting to their roots or honoring their cultural heritage. Additionally, it can be seen as a symbol of strength and courage in the face of adversity. Whatever the reason, SPQR tattoos are truly one-of-a-kind pieces of body art.

How did SPQR tattoo start?

The SPQR tattoo has its roots in the ancient Roman Empire. The letters, which stand for Senatus Populusque Romanus (“The Senate and People of Rome”), have been a part of Roman culture since at least the fifth century BC. Over time, these words became associated with strength, courage, and resilience. As Roman culture spread across the world, so did the SPQR motto. The phrase was featured on flags, banners, coins, and other objects to show Rome’s power and influence. Later on, SPQR tattoos emerged as a way for people to show their dedication to the Roman Empire and its legacy. Today, SPQR tattoos are a popular form of body art around the world and have come to represent strength, courage, and perseverance.

What does SPQR tattoo mean?

The letters “SPQR” are an acronym for Senatus Populusque Romanus, which translates to “The Senate and People of Rome.” This phrase was used by the ancient Romans as a symbol of their power and influence. Over time, it came to represent strength and courage in the face of adversity.

How much does a SPQR tattoo cost?

The cost of a SPQR tattoo will depend on the size and complexity of the design. Smaller, simpler designs might cost as little as $50-$100, while larger or more detailed pieces could be upwards of several hundred dollars. The location you choose to get your tattoo can also affect the price; some studios may offer discounts for specific types of tattoos or for repeat customers. It’s always a good idea to shop around and compare prices before making your final decision.