10 Best Spider Tattoo Ideas You Have to See to Believe! 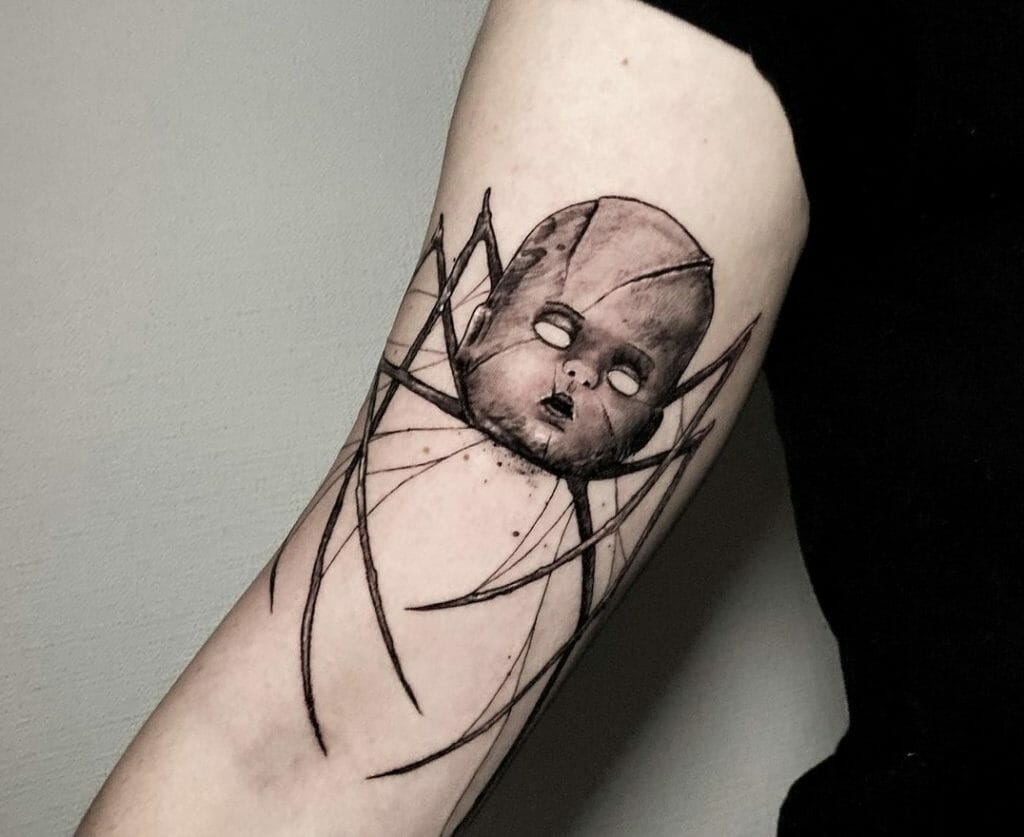 Looking for the best spider tattoo ideas? Discover some of the best tattoos right here on this list compiled by us!

Spiders are unique in nature and are known for creating unique webs to capture insects or other prey.

Spider tattoos, as is the case with most animal tattoos, portray both the positive side and the negative side of these wall-crawlers. Spiders have been a part of popular culture as is seen in the case of the famous Marvel superhero Spider-Man and have been used like an old-school tattoo design.

Spiders have held a place in the human world since ancient times and in many cultures, are considered to bring both positive and negatives impacts on life. In most cases, spider tattoo symbolizes deception, endurance, and wilderness, and can also symbolize creativity, goodness, good fortune, vigour, and intuition. In the native American culture, the mark of the spider is seen as a protection against natural disasters with the web being similar in design to a dreamcatcher. Anishinaabe, also known as ‘Spider Woman’ was believed to weave her magical web to offer protection to infants. As the tribe grew, the workload of the Anishinaabe grew, women began to create their own dreamcatchers to protect their children from bad dreams and to bring good dreams to their children.

Spiders also played a huge role in Greek mythology, as the story of Arachne is a quite popular one. Arachne, a woman spider, was great at weaving, and the goddess Athena was jealous of Arachne’s talents, and wish bad things on her which made Arachne’s life tough. After Arachne passed away, Athena regretted her actions and turned Arachne into a spider once again.

In European culture, the spider is seen in a negative light and is considered to be an aggressive animal that was to be blamed for The Black Plague. Another negative sense of the spider is it being used by white supremacist groups like the KKK that use the web of the spider as a symbol.

Among all these negative and positive implications, the symbolic meaning of the spider stands for beauty, female power, perseverance, despair, and life. As it stands, only the person, i.e., respective owners of spider tattoos or spider web tattoos can elaborate the great idea and implication hidden behind spider tattoos.

Realistic or 3D tattoo designs have become prominent with the passage of time as tattoo artists adapt to the new technologies that they can implement in designs nowadays.

This spider tattoo draws inspiration from the realistic method of tattooing as it portrays amazing usage of colour and intricate detailing to create a tattoo design that has the feel of a real spider crawling on the face of the wearer.

If you don’t like the placement of this tattoo, you can ask your tattoo artist to ink it on the neck or some other part of the body, as per your preference.

In many parts of the world, the spider is seen as the bearer of negativity in life and an eerie animal that looks creepy with its body structure and multiple eyes. This look is used as a symbol of creepiness and hence can be approached with a sinister design.

This eerie spider tattoo design is one such idea that uses the concept of spiders being evil entities. The black ink work is marvellous to look at and the design of the spider is perfectly drawn to give it an evil look as a human figure dangles on the spider’s webs.

If you are not sold on this design then you can take a look at the spider tattoo below to get an even more sinister design in which the tattoo symbolizes death.

Spider tattoos like this design take a different approach from the traditional spider tattoo designs and give the design a haunting look that is perfectly suited to people who have like to flaunt dark ideas on their bodies!

Rest assured, you can get these spider tattoos inked on your body in any size, as they can be altered and inked as smaller tattoos or larger tattoos that can fit on your neck or legs.

In Japanese culture, the Hannya is the female equivalent of the Oni, which are the forms evil people take after death as they become demons trapped in hell.

However, the Hannya has both negative and positive impacts on people’s lives as the Hannya mask is used to promote good luck and ward off evil. They are used as talismans against spirits, and negative energies and are often used as a protective talisman by Japanese people.

This Hannya spider tattoo is one of its kind as it takes the idea of folklore and creates a tattoo that is both eerie and stunning to look at! Designs like this spider tattoo will fit your body perfectly if you are someone who has an interest in eerie or unique things.

Oni, the male equivalent of the Hannya, is another popular design that has been used in art and literature over the years and is drawn in various methods to get the best experience out of the dark tone behind the origins of such creatures in Japanese folklore.

If you are in the search of a frightful and evil design, then this Oni spider tattoo will be a perfect fit for you.

These designs can also be paired up with other tattoos like a spider web tattoo design to get the best out of the design.

Hunter x Hunter is one of the most well-known anime in recent years, and it is adored by fans worldwide for its action-packed sequences and well-thought-out characters and stories. Hisoka Morrow is one such character.

Hisoka is portrayed as a peculiar character who is constantly on the lookout for strong people to satisfy his thirst for bloodlust. Hisoka is a former member of the Phantom troupe, which wears spider tattoos on their bodies, and Hisoka, being a former member, has a spider tattoo with the number #4 engraved on it, but it is shown as a fake one, as he removes the tattoo so that he can fight the troupe’s leader, Chrollo, as internal conflicts are frowned upon in the troupe.

If you’re a fan of Hisoka, this spider tattoo design will be a great way to pay tribute to the character!

If you want to look as badass as possible, then the hand tattoo design is a great way to flaunt your badassness as the hand is on the higher end of the pain scale and getting tattoos on the part is ridiculously painful because of the lack of padding and the risk of infection that can be caused as the hand is one of the most used parts of the human body.

Hand tattoos don’t really have a meaning and are usually just a lifestyle choice. Spider tattoos are one of the most suitable tattoo designs as they can take up the entire hand by making the limbs of the spider long to cover enough skin space just as seen in this tattoo design.

If you don’t like the base design, you can add your own elements to it by adding spider webs, or tiny spiders crawling around it, or by adding elements that resonant with your life.

Spiders are known to be predators of the highest order and use their sharp senses to wait for their prey to get entangled in their webs.

The spider with butterfly tattoo is in most cases used to symbolize mystery, spiritual growth, and mystic powers, and also portrays the resourceful nature of the wearer.

The jumping spider is quite literally one of the cutest spider species and is famous for its quirky behaviours which include dancing to attract females as they beat their abdomens on the ground and wave their legs in the air. As a result of this quirky nature, these spiders are often the subject of various cute art designs and this cute jumping spider tattoo is a perfect example of such a design.

The tattoo has a cute approach to it as it portrays a friendly spider with its cute little eyes and a cute frame into which the spider is drawn.

If you are a fan of cute tattoo designs then this tattoo is something that you should consider!

Spider tattoos are often created using a twisted idea of ferocity and mystery but in rare cases, they can be combined with beautiful objects like flowers and cute things to create a design that is a combination of both the spider’s mysterious nature and the beauty of nature.

This simple spider tattoo manages to get the best out of both elements and creates a design that is visually aesthetic. The design is based on the neo-traditional tattoo idea that uses aesthetic patterns and designs to combine more than one element to create a visually stunning tattoo design. The flowers and the spider hanging by the web are shaded to perfection and come together to form a harmonious design.

If you are a fan of tribal tattoos then spider tats like then till design will fit your preference.

Dagger tattoos are often used to symbolize purpose, ambition, heartbreak, danger, or intimidation and can turn any tattoo design into a badass idea. Daggers can be combined with various elements to bring out a different meaning to them and in this case, the dagger is combined with a spider.

The spider is shown to be a part of the dagger, giving it a sinister look that can be interpreted as the idea of a looming danger. The use of the yellow colour in a completely black design helps the tattoo pop, giving it an appealing look that is gonna turn some heads!

Neo-traditional tattoos are known for their bright colour usage that helps in bringing a certain swagger to the base design. These designs have been a part of various cultures and have had held their position in the world of bright and colourful tattoo ideas.

This tattoo makes the best use of the idea of a spider tattoo as it put the spider in the center of the design and surrounds it with a frame of the web. The brightly coloured spider fits perfectly in the all-black web and is astounding to look at!

Designs like these ideas use more than just spiders, as they can be used to portray a wide range of elements from day-to-day life!

Here are some recommendations similar to spider tattoos: