101 Best Spartan Warrior Tattoo Ideas That Will Blow Your Mind 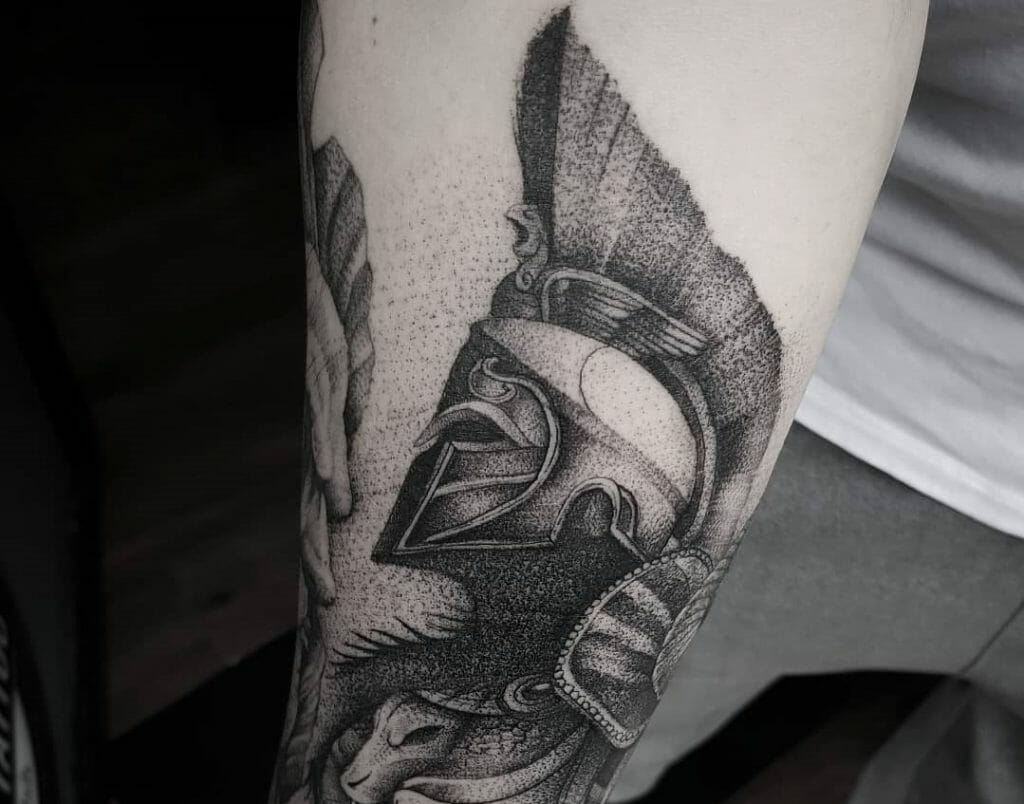 If you are looking for some badass tattoo ideas, this article is for you. We have some amazing Spartan warrior tattoo ideas that will blow your mind.

According to ancient culture, the Spartan army belonging to the Greek Empire used to be undefeatable.

Enemies of the Greek Empire met their defeat as soon as they came in contact with the Spartan army. Their amazing skills in battle and warfare, along with their combat strength, is what made them legendary.

Several battles, like the Battle of Leuctra and the Battle of Thermopylae, proved the strength of the army. These brave soldiers were also the most efficient warriors of that time. There are several movies that have depicted in detail how the army trained and how they won so many wars. Although there was no comparison of their strength, they did not always win. However, they did leave a considerable amount of enemy blood behind.

During wars, they geared themselves with a spear, chest plate, cuirasses, and a helmet. For combat, they also carried a sword with them. Their strength made them feared warriors amongst their rivals.

Spartan Tattoo designs are masculine and usually made in black ink. They represent the honor and strength of the Warriors, also reflecting on the personality of the wearer. They help the person look confident and badass.

In the famous Greek Warrior Society, the Spartans always showed the height of strength and bravery. The military prowess was feared and they were feared by all the enemies. So many years later, even today, the Spartan soldiers are a symbol of strength.

The Spartan warrior tattoo can be edgy and compelling. With the right kind of black and gray shading, the tattoo can look very realistic.

This particular tattoo is made on the calf of the person. It is wrapped around the leg and it looks like a sleeve Spartan tattoo. It is made with black and white shading. The thin strokes of black ink make this tattoo look very beautiful, almost like a sketch. If you’re looking for a bold and brave look, this tattoo is perfect for you.

Brave Spartans were known for their fearlessness and their wit. Their reputation in Greek society made them elite and high society. These spartan soldiers were raised to be ruthless and protect their country and their spartan king no matter who attacks them.

The Spartan helmet is one of the most iconic helmets among all soldiers of ancient times. This helmet partly became famous because of the famous movie, 300. The helmet of a Spartan is a symbol of strength and courage. There are several designs available that showcase the helmet of the Spartan warrior, However, only the helmet tattoo is also very popular. People like to get this design tattooed either on their chest or on the back, where it is easily visible if they want.

This particular tattoo is made with black and white shading. It shows the main Gears of the Spartan warrior, the sword and the helmet. Behind the design, there are some red strokes that symbolize blood. Desplat symbolizes the enemy of the blood and the bravery of the warrior.

The fierce spartan people considered their shield to be a part of their body. According to the ancient Greek culture, the spartan women and mothers of these warriors asked them to either have the shield on their return or ride it. If the warrior lost the shield on the battlefield, he was punished more than the people who lost other parts of their body. Shields were considered a sign of pride and unity during battle, losing the shield meant losing the line, and that was not acceptable.

This beautiful piece of artwork is made very intricately by the tattoo artist. The artist’s clean shading with black and grey makes this tattoo look realistic. This tattoo is from the scene in the movie, 300. A beautiful and bold design that will represent your inner strength.

The Spartan warriors had an honor code for which they were popular. They had a strict code under which they treated every soldier equally no matter what background they came from. Spartan warrior tattoos represent honor which we all long for in our lives. This trait is one of the main reasons why this tattoo is popular among people.

This spartan warrior tattoo is worn by the wearer as a sleeve tattoo. The helmet and the shield of the warrior are prominently visible in this tattoo. It is made with shades of black and grey with white as the highlights. The feathers of the helmet, which is the key spartan element is made with red ink which makes it more notable. The other details of this tattoo design is very well established.

The first and only role spartan boys knew about while growing up was being a soldier. Every other role in their life revolved around this role. The code of honor forbade them from being a coward and recklessly. The Greek warriors are an inspiration for many people across the globe even today.

A Spartan warrior tattoo can be of various designs, like a full-body tattoo or a helmet tattoo. Any such tattoo will be the perfect tattoo design. This tattoo appears to be of a soldier on the battlefield with his helmet and spear. The accurate and realistic shading of the tattoo makes this design stand out. This big spartan tattoo is situated on the forearm of the person, however, this tattoo is versatile and can be placed on any part of the body.

One of the main spartan symbols was their bravery. It was the characteristic apart from the honor that made them powerful. There have been stories of the brave soldiers being outnumbered during the war, but they never backed out. The spartan armies won most of the time due to their wit and strategies. The tattoos of the great spartan soldiers could be a testament to them or just reflect your inner desires.

Spartan warrior tattoos are the perfect designs for those people who have the spirit of the warrior. They never missed a chance of showing off their bravery to their enemies. These warriors were always brave till the end of their times. They placed themselves in dangerous and difficult situations and were always willing to protect one another from the face of evil. Their military training taught each of them to be courageous which they showed every day on the battlefield.

This tattoo is placed on the forearm of the person and made with fully saturated black ink. This design looks like a beautiful sketch and the tattoo artist has done a tremendous job in portraying it. This is one of the most unique spartan tattoos which could make the perfect design for you!

One of the most popular tattoos that are still stylish and trendy is of the spartan warrior from the movie, 300.

This particular tattoo is a beautiful design that is made with shades of black and green. It very clearly depicts a Spartan warrior wearing his helmet, probably standing on a battlefield. The use of black and Gray in the background made the tattoo more prominent. The detailing of the tattoo is very beautiful and would make of great design for your next body art.

This is one of the best tattoos that you will find of the Spartan warrior. It shows the main Spartan symbol, which is the helmet and the shield very clearly. The helmet, although made with hues of black and grey with white highlights some parts of it. The red feathers on top make the helmet more prominent and visible. The detailing of this tattoo is marvelous. Such tattoos usually take more than one sitting to make. This beautiful design is made on the upper arm of the person. Other parts of the body where this tattoo would look great are the chest or the back.

If you liked these designs and are looking for some more similar designs, then you can have a look at the following –

What is the meaning of a spartan warrior tattoo?

A spartan warrior tattoo generally symbolizes strength, courage, and power. Spartan warriors were known for their bravery in battle, and their tattoos often reflected this. The most popular design was the lambda, which represented the spartan shield. Other common designs included swords, spears, and helmets. Spartans also sometimes got tattoos of their gods, such as Zeus or Apollo.

What is the history behind the spartan warrior tattoo?

The spartan warrior tattoo has a long and fascinating history. Spartan warriors were some of the most feared and respected soldiers in the ancient world. They were known for their bravery, strength, and discipline. Spartans often got tattoos to show their dedication to their gods and their city-state. The most popular design was the lambda, which represented the spartan shield. Other common designs included swords, spears, and helmets.

How did the spartan warrior tattoo become popular?

The spartan warrior tattoo became popular in the late 20th century, thanks in part to the movie “300.” The film, which is based on the graphic novel of the same name, tells the story of the famous Battle of Thermopylae. In the movie, Spartan warriors are shown with a variety of different tattoos, including the lambda. The film helped to popularize the spartan warrior tattoo, and it has since become a popular choice for people who want to show their strength and courage.

What are the different designs of spartan warrior tattoos?

There are a variety of different designs of spartan warrior tattoos. The most popular design is the lambda, which represents the spartan shield. Other common designs include swords, spears, and helmets. Spartans also sometimes got tattoos of their gods, such as Zeus or Apollo.

What are some of the best places to get a spartan warrior tattoo?

There are a variety of different places to get a spartan warrior tattoo. Some people choose to get them on their arms, legs, or back. Others opt for more hidden locations, such as the inside of their wrist or ankle. No matter where you choose to get your tattoo, be sure to find an experienced and reputable artist who can create a design that you will be happy with.

How much does a spartan warrior tattoo cost?

The cost of a spartan warrior tattoo will vary depending on the size, complexity, and location of the tattoo. Generally, smaller tattoos will cost less than larger ones. Tattoos that are located on more visible parts of the body, such as the arm or leg, will also generally cost more than those that are located in hidden areas.