101 Best Snake Thigh Tattoo Ideas That Will Blow Your Mind! 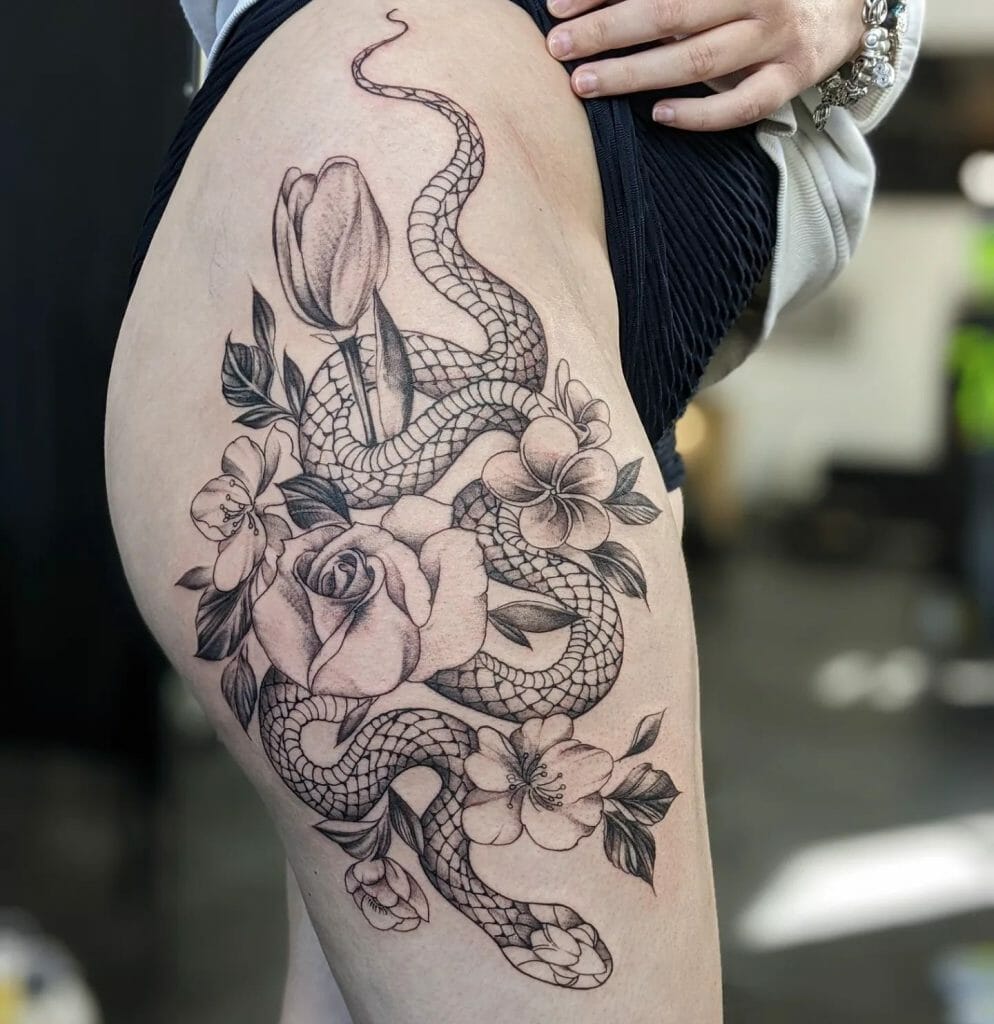 Present in different cultures through different meanings, snakes are symbolic of deep meanings related to life and beyond.

As vicious as snakes appear to be, their artistic depth is not hidden from the artist. Probably why they are heavily included in artistic pieces as a symbol carrying different meanings or simply enhancing the artwork with its unique, wrapping body shape.

Being present in native cultures as a revered animal, snakes have been a part of artistic creations since the beginning of the human settlement. Their predatory nature is not unknown to people, yet its deep symbolism has been passed through many years of cultural practices. Incorporating snake structure in art is a popular practice. Among many other animals, the snake also happens to be one of the most prioritized animals by tattoo artists, making snake tattoos a leading choice among tattoo enthusiasts.

From tricking Eve into eating an apple to implying the unending growth of a human and the beginning of a new life through rebirth, snakes carry contrasting symbolism in different cultures. Therefore, people have to sieve through difficult choices to find the perfect snake tattoo design that matches their implied meaning. Whether a snake shoulder tattoo or a snake wrapped around chest tattoo, choosing the right design and place is essential to deliver the right impact.

The snake tattoo idea above replicates its living environment using the floral inclusions on the snake’s scale. Rather than opting for a realistic snake tattoo artist has incorporated natural elements to elevate what could’ve been a simple snake tattoo to something very elegant and unique.

The tattoo doesn’t have to be too complicated to leave a visual impact, and the tattoo artist has proved to illustrate the same through the given simple snake tattoo. This tattoo style can be your savior for people who would love to get a snake tattoo but fear its shiny, scaly appearance. Go for a snake design without actually replicating the scary part; isn’t it fun!

Going ahead with traditional tattoo pieces is often a popular choice among tattoo lovers, and this one is dedicated to all those who enjoy getting traditional black and white tattoos. The detailed snake tattoo uses bold black color and thick outlines to emphasize the illustration and its components.

Instead of using the snake’s entire body, the artwork incorporated creativity by including chopped pieces of the snake’s body. The chopped parts also seem to emit blood, though to keep the artwork as less gory as possible, the colors stay black for the blood as well. This simple touch elevates the simple design to something not unusual.

The snake and rose tattoo together is a timeless combination used to depict the vicious and gentle nature of a thing simultaneously. As the snake represents sin or temptation, the rose implements a sign of elegance. Together, these two create a beautiful contrast and deliver a deep meaning of beauty, succumbing to temptation or implying that real beauty can grow through unfavorable circumstances and evil intentions.

The tattoo artist kept the art as basic as possible, adding a very gentle contrast in artwork through rose petals carrying a lighter shade of red. Illustration manages to put the snake in an ideal placement, wrapped around the rose elegantly, making the artwork beautiful yet scary.

The Greek goddess of philosophy, and art, Medusa is a widely known figure for her connection with snakes. The philosophies describe her as a vicious, monstrous figure who turned people into stone as they looked into her eyes; women across the world also perceive her as a power icon.

The realistic Medusa portrait with a hound of snakes on her head is an excellent style to incorporate for people fond of mythological legends and their components. The detailed illustration simply uses black ink to create intricate scaly figures and several snakes without confusing their build. Women and men can all go for this tattoo in a few different ways; that must star a head full of snakes on an extensive canvas like your arm, thigh, forearm, or shoulder muscles.

Japanese style tattoos are known for their intricate designs and vibrant colors, depicting every detail and story behind the tattoo vividly. The Japanese snake tattoo above follows the same route and illustrates a battle between a snake and a wolf. The snake tattoo meaning can differ from long-lasting rivalry to putting up a great fight, highlighting the trait of resilience.

Snake fights feature in some of the most popular designs opted by tattoo artists due to the added thrill factor in its illustration. The above tattoo replicates the same thrill and can be tattooed on the skin of your forearm, chest, or as a shoulder tattoo.

Taking another thrilling fight between a snake and a roadrunner bird, the tattoo illustrates the vicious scene through black and white colors, emphasizing the classic bold-color touch. The snake thigh tattoo describes a wicked batter between the two animals who appear extremely vicious through their stance and eyes.

The detailed tattoo deserves a broader canvas; therefore, keeping it as a back tattoo on a woman’s body or thigh tattoo is an excellent choice. Highlights and shades are what blow life into the illustration. Hence, the tattoo depicted also appears to be alive. If wicked tattoos suit your taste, this one must help you get inspiration for your next snake tattoo thigh.

The tattoo stars a dilapidated skull with a snake wrapped around its entirety, perfect to style on your forearm or thigh. You can seek inspiration to explore the darker themes of snake tattoos through this artwork. You can also include a two-headed snake instead of one or a snake eating its prey for a little switch.

The small snake tattoo design plays with the traditional tattoo style, following its bold black lines and vibrant colors to create a simple yet impactful snake tattoo. When getting snake tattoos, people usually feel inclined towards realistic tattoo styles, though traditional style tattoos are hard to beat with their old-style charm.

The tattoo, being surrounded by flowers, does not make the snake any less vicious, thanks to its vividly colored scales and brutal fangs. Tattoo lovers can find inspiration from this snake tattoo on the thigh by tweaking its position just a little. Instead of keeping the curved snake body entirely on the front of your thigh, try and get the design to wrap around the thigh, covering more area and appearing more visually compelling equally from the back and front.

Intricate snake tattoo ideas can appear exceptionally good on the wearer when pulled off successfully. The tattoo above delivers a non-traditional image of a snake with peonies though it has opted for a color combination that makes it appear mysterious and fierce. Such tattoo ideas are best suited for big spaces on your skin; hence, choose the right skin space if you wish to have a similar illustration.

The tattoo artist has used deeper shades of red, green, and grays to extend a darker theme of the tattoo, which you can tweak in your own creation with either vibrant colors or by keeping the illustration entirely black and white.

The detailed tattoo design, taking up the entire side of the pelvis and thighs, is an excellent piece depicting several different features combined to build a large tattoo artwork. The tattoo features flowers, a dagger, a raven, a compass, and a snake, creating a masterpiece from which you must take inspiration.

Besides creating a detailed illustration, the artist has also included vibrant colors with highlighting different shades and shadows. The tattoo demands a large space to spread its majestic look, so either choose your thigh or chest to get the illustration done. You can also replace a few objects from the illustration to personalize them. For example, an eagle can replace the raven, while roses can be replaced with lotuses to signify rebirth.

Snake tattoo has been a crucial part of tattoo culture for years and would continue to be with improved designs, and innovative takes by newer artists. Make sure you find the right illustration that suits you the most!

Snake tattoos can never be enough, so why not take a look at a few more to find inspiration!

What is a snake thigh tattoo?

A snake thigh tattoo is a tattoo of a snake wrapped around the upper thigh. It is a popular choice for both men and women and can be customized to suit the individual’s taste.

How much does a snake thigh tattoo cost?

The price of a snake thigh tattoo will vary depending on the artist, the size and complexity of the design, and the location of the tattoo. Generally, however, you can expect to pay between $200 and $500 for this type of tattoo.

How do I choose a design for my snake thigh tattoo?

When choosing a design for your snake thigh tattoo, it is important to consider the meaning that you want the tattoo to convey. Snake tattoos can symbolize power, strength, and danger, or they can be more light-hearted and fun. You should also think about the size of the tattoo and where on your thigh you would like it to be placed. The options are endless, so take your time and find a design that is perfect for you.

How do I care for my snake thigh tattoo?

After you have your snake thigh tattoo, it is important to take care of it so that it heals properly and looks its best. Follow your artist’s instructions for how to clean and moisturize the tattoo. Avoid sun exposure and hot tubs or pools for at least two weeks. And, be sure to keep an eye on the tattoo for any signs of infection, such as redness, swelling, or discharge. If you have any concerns, be sure to contact your artist or a medical professional.