10 Best Snake Eyes Tattoo Ideas That Will Blow Your Mind! 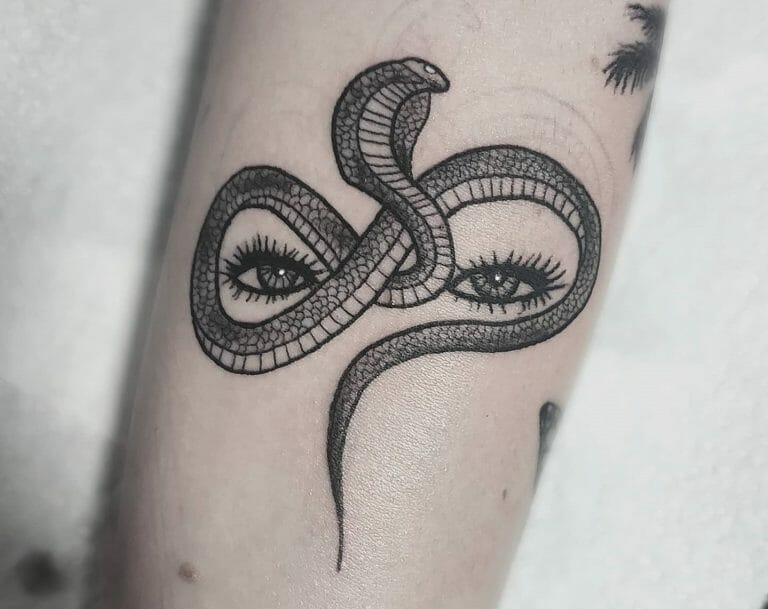 Do you want to get the tattoo of a dangerous symbol that creates fear? Then go ahead and check out the best snake eyes tattoo designs!

A snake eyes tattoo meaning can differ for people depending on how they interpret it.

For some, the snake eyes tattoo can be simply a tattoo of the eyes of the snake. However, for people who often engage in gambling, snake eyes can refer to a particular dice formation.

Snakes are considered to be a symbol for danger, temptation and suspicion. A pair of glowing snake eyes in the dark will strike fear into the hearts of the bravest man or animal. As a result, a lot of men and women choose to get snake eyes tattoo in order to get an awesome tattoo design that will stand apart in the crowd. People who often gamble or play games with cards and dice also consider a pip or 1 circle on each dice to be a snake eye. As the two single dots on both the dice remind them of snake’s eyes. In addition to that, a snake eyes dice during a game is never lucky for the player and often signals disadvantage and loss.

Therefore, if you are looking for a unique tattoo design that will represent your inner, darker side, then the snake eyes tattoo in whichever form will be perfect for you!

Snake tattoos are usually more masculine as men are seen to carry around huge tattoos on different parts of their bodies. However, with enough creativity and innovation, women can also get amazing snake tattoos on their body which are feminine and elegant enough. Just ask your tattoo artist to draw the snakes with dainty, smooth and curved lines. The figure of an elegant serpent along with two mysterious eyes will definitely draw attention wherever you go.

Not all tattoo designs will look great on whichever part of the body you choose to get it tattooed on. Hence, you should always discuss your tattoo idea with your tattoo artist and ask them how the design would look after completion. Snake eyes tattoo is one of those tattoos which will look great regardless of where you choose to get it. While most people prefer to get it on the upper half or lower half of their arm, you can also get it on your back or your chest. If you have a high pain tolerance, you can also get these tattoos on your stomach, below your ear or below your chest on the rib cage area.

If you don’t like monochromatic, black-colored tattoos, then a more colorful style will definitely suit you. As can be seen in the picture, you can also ask your tattoo artist to add some vividly colorful ink to the tattoo. The tattoo artist has also changed the pair of pip or the single dots on the dice to small hearts to make it more fun and cute.

Here are some more amazing dice tattoo ideas if you want to look at some more designs!

If you want a bold, eye-catching tattoo that will draw attention wherever you go, your hand might be the best place to put that tattoo. A snake eyes tattoo can have different meanings based on which interpretation people are familiar with, but you can put the tattoo on your hand for a menacing effect nonetheless. After all, a snake is known for spewing venom on its prey or predators to save itself. From the stories of old religious texts to popular culture, a snake has also come to symbolize a traitorous person in our life. You can also ask your tattoo artist to customize a small snake tattoo for you on your hand.

A blackwork tattoo is a tattoo design that is entirely done using dark black ink for the tattoo on the skin. Some tattoo artists also frequently use slight shading using other colors like white or silver to add to the beauty of the tattoo. Therefore, if you are in the search for a bold tattoo, then you can choose the blackwork style for your snake eyes tattoo.

While snake eyes dice usually means bad luck or a disadvantageous outcome for the player, you can definitely opt for a fun and quirky design for it. Just like the wearer in the picture above, you can have some fun with your tattoo designs and add your own personal touches to it to create a unique and cool snake tattoo.

If you want a unique and unconventional tattoo that is very different from the rest, you can draw some inspiration from the elements in the photo above. Here, the wearer has gotten a really awesome and graceful snake tattoo where they have added several eyes. With such an awesome and attractive tattoo, you can expect several people asking you “What does the tattoo on snake eyes mean?” You can also add a sword or other motifs to the snake tattoo according to your wishes.

A snake tattoo meaning usually refers to the negative qualities associated with snakes such as temptation or betrayal from a close loved one or friend. In the stories in old religious texts, they are also a sign of rebirth after death and fertility. Snakes are infamous for their bright yellow or green eyes that can be seen in the dark. They use their powerful seeing abilities to focus on prey at night by sensing their location and to also save themselves from predators. They also have a graceful, slithering movement. If you are particularly inspired by the eyes of a snake, why not get a cool tattoo of it as well?

If you are looking for ideas for more snake tattoos, check out these awesome tattoo ideas with snakes!

Snake Eyes Tattoos With Other Motifs

If you are someone who lives to defy expectations and have a strange sense of humor in life, then you can also find a snake eyes tattoo to be lucky for you! While others consider the snake eyes dice tattoo meaning to be unfortunate as it can only mean that they will lose in the game, some also embrace it as a sign of good luck. Thus, if you like to go against the wave, then you can get a snake eyes tattoo with a positive connotation. You can also add other motifs or tattoos to your snake eyes tattoo dice like the wearer has done in the picture above by adding flowers with the dice.

Snake Eyes is a popular character connected to the GI Joe action dolls and movies franchise. Even though Snake Eyes is not directly connected to the GI Joe characters, he is still a very popular action hero among the fans especially in Japan. He also has a unique costume with an all-black outfit, mask and googles that hide his face. A movie about Snake Eyes was also released with Henry Golding playing the character of the brave and mysterious loner. Consequently, if you are a fan of the series or the character, you can also get a large and awesome Snake Eyes tattoo GI Joe on your forearm.

A tattoo is a sign of our personality. We use these pieces of art to express more about ourselves, likes, and interests. Consequently, if you feel like you want a tattoo that has a dangerous and fearsome meaning, go ahead and get a snake eyes tattoo!