101 Best Snake And Flower Tattoo Ideas You Have To See To Believe! 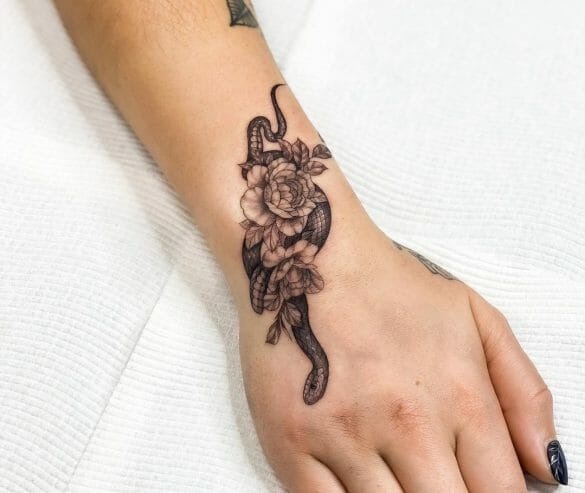 Snakes have traditionally had a wide range of symbolic connotations, both positive and evil.

Snakes have symbolic meaning in many ancient societies, and they frequently appear in ancient myths, folklore, mysticism, and sacred teachings. The snake has been represented as a metaphor for evil across centuries but has also been regarded as favourable, moral, and benevolent.

The snake, whether evil or good, is a force to be reckoned with. Snakes are among the most misinterpreted animals on the planet. While some are hazardous to people, the vast majority are not known to bite people. They usually avoid confrontations with humans whenever they can. When a snake bites a human, it usually does so as a retaliation. This is because the snake will usually feel threatened when it attacks. It carries out an attack only to protect itself or to feed itself. Usually, all snake species wait before striking and understands that perseverance will be rewarded when it searches for prey.

Predators live in the shadows and only come out now to prey around dusk. The bulk of snake bites happen just before sunset. There are numerous meanings behind snake tattoos, either favourable and unfavourable. Security, Healthcare, Evolution, Lifespan, Learning, Understanding, Mystery, Strength, Control, Intellect, Seduction, Death, Resurrection, Consciousness, Tolerance, Harmony, Cleansing, Mercy, or Structure: snake tattoos can be connected with any of these concepts.

Nevertheless, in the ending, your tattoo should symbolize whatever you want it to convey. When the snake wraps around a flower, it leads to corruption of its innocence and elegance with its vicious nature. On the other hand, flowers represent different emotions as well. They can stand for vitality, beauty, passion, and love. Sometimes, a snake curled around a flower might represent overwhelming passion, seduction, and corruption. All over the world, a detailed snake around a flower, for example, a lotus flower, can be one of the best snake tattoos!

Let’s take a look at some of the amazing snake and flower tattoo designs:

This upper arm snake and flower tattoo give the snake a great look. The way the snake slithers around the shoulder gives it a fantastic look. The snake is made with black ink and brings out the snake and flower tattoo meaning well. The tail of the snake is hidden with flowers that are made with red ink. The flowers at the tail are red only at the borders and do not cover the whole of the flowers. Every animal is scared of the snake because of its vicious nature; however, the red flowers give a sense of playfulness to the snake, and maybe an animal won’t be scared of it if it saw the snake that way.

This is a pretty big tattoo. In this art tattoo, The animal is seen hiding behind a bunch of peonies. The whole tattoo is drawn with only black ink. Even the flowers are marked with black ink except for a single strip on the snake’s back, which is a bright red colour. The tattoo artist probably chose this colour so the snake would stand out and catch the person’s attention looking at it. The red colour does a great job of highlighting the snake. Even though it is a coiled snake between the flowers, you can differentiate the snake from the flowers because of the iconic red stripe. This small snake tattoo is perfect for minimalists.

Snakes are the symbol of life and ferocity. It could be a meaning of the hardships you had in life, or some obstacle you overcame in life, or new beginnings in your life. If you do a newsletter subscribe, you can get more of this popular tattoo design. This snake and flower tattoo drawing is impressive because it is simple and brings out the meaning you want it to show. A flower and snake tattoo would usually have a bold meaning and symbol. In different cultures, they mean other things. In Christianity, snakes are considered the devil and bad luck as the snake tempted Eve to eat the forbidden apple in the garden of Eden, which is why Adam and Eve were banished from the garden of Eden.

In this tattoo art, more emphasis is given to the flower art rather than the snake tattoo. The tattoo artist makes the dahlias big and beautiful with plain black ink while the snake is tiny and thin only to give meaning and not overpower flower tattoos. Another popular tattoo design is the snake eating its tail. The snake eating or snake biting his tail can mean the end of everything or death and rebirth. In many cultures, such as ancient Egypt, the popular motif was that snakes represent healing. Even without a vibrant colour, the snake gives a meaning that you would want it to show. The snake looks non-venomous. This would also make for a great idea for excellent back tattoo designs.

This snake tattoo design can easily cover your forearm. Even though the tattoo is black and white, it gives you a contemporary look at those with coloured tattoos. Snakes shed their skin while moulting and grow because their skin does not grow along with them. Snakes are known to be a symbol and meaning of good luck in Greek mythology. In Roman mythology, snakes also have a meaning close to luck. The snake in this tattoo is surrounded by leaves and buds of flowers but not the actual flowers that have bloomed. The snake can be seen slithering among the leaves in this tattoo. This tattoo can also be made as a snake chest tattoo.

A snake tattoo is made on the stomach, but it can also be made on the chest. The tattoo shows one giant flower, which is surrounded by smaller flowers. The lotus flower tattoo covers most of the enormous snake tattoos, which the tattoo artist makes. There is only one snake in this tattoo which is the Scarlet Kingsnake. It is a snake that is feared by all because of its deadly nature. The snake’s head is protruding upwards and looks dangerous as it slithers its tongue.

This small snake tattoo is made on the rest. It looks both cute and dangerous as the snake coils around the branch where the flowers are growing. The flowers can be a rose tattoo or any flowers of your choice which you relate to. Roses give an added look of beauty to the tattoo and make it look prettier. A snake and flower tattoo for women would look good if the flower is a rose tattoo. The serpent is an equivocal sign; it is not simply wicked. Therefore a snake curled around a rose would not only have negative connotations, but it also represents eternal life and embracing a passion for a skill.

The snake drawn in this tattoo is a Japanese pit viper that looks dangerous and scary with its vast head and piercing eyes. The tattoo is made on the thigh of this woman and looks brilliant and stunning. The tattoo design is made diagonal and covers most of the thigh area to give the tattoo a clear and proper finish. The tattoo shows a snake hiding underneath flowers that look beautiful even they are made in black ink. The emergence of dynamic forces, the genius of all growing things, is symbolized by a snake wrapped around a tree or other axial figure.

This tattoo is made on the woman’s upper arm, which shows a snake on top of a bunch of flowers and leaves, which are made with geometrical designs. The snake has patches all over its skin. Near the snake’s head, there is a circle made which is also near the tail area. The tattoo looks complete because of these two circles, which start and end the tattoo. The combination of snakes and flowers seems to be the most excellent emblem of enticement. Flowers represent naivety, whereas the snake represents devastation and the damage of purity.

A snake and flowers tattoo is unique and personal to each person. It should be made different and memorable according to every person’s taste and style. Here are a few ideas that you can use to play around with to decide which tattoo suits you the best.

What is the meaning of a snake and flower tattoo?

A snake and flower tattoo is a popular design that often symbolizes the duality of life and death. The snake, often a cobra or other venomous reptile, represents mortality while the flower can represent renewal, hope, and beauty in spite of all odds. This type of tattoo may also be used to express rebirth or to commemorate a special occasion. Some may also opt for this design to represent their connection with the serpent in various cultures and religious traditions. Ultimately, it is up to the individual to decide what meaning the tattoo has for them.

What are some popular designs for a snake and flower tattoo?

Popular designs for a snake and flower tattoo include intertwining serpents, with the flower being held in their mouths or coiling around it. Another popular design is of a single snake surrounded by several flowers. Some people also opt for depictions of multiple snakes intertwined with vines and flowers. Other popular designs may feature a skull within the center of the flower, which brings in a darker element to the tattoo. Ultimately, there are no limits to what kind of design a person can come up with and it’s all about creativity and personal expression.

How much does a snake and flower tattoo cost?

The cost of a snake and flower tattoo depends on the size, complexity of design, and placement on the body. Generally speaking, smaller tattoos will cost around $50-$100 while larger ones can range from $100 up to several thousand dollars. Other factors such as location, color palette, and artist reputation will also contribute to the overall cost. It is always best to consult with the artist prior to getting a tattoo in order to get an accurate price estimate.

What are some snake and flower tattoo aftercare tips?

When it comes to taking care of a snake and flower tattoo, the most important thing is to keep it clean. This means washing the area twice a day with warm water and mild soap and then patting it dry with a clean towel. It’s also essential to apply an ointment or lotion designed specifically for tattoos in order to keep it properly moisturized. It’s important to avoid swimming or soaking the tattoo in water, as this can cause fading and other damage. Additionally, it’s best to keep the area out of direct sunlight and out of reach from any abrasive materials. Lastly, make sure to follow up with the artist for any additional aftercare instructions that may be necessary.