10 Best Small Snake Tattoo Ideas You Have To See To Believe! 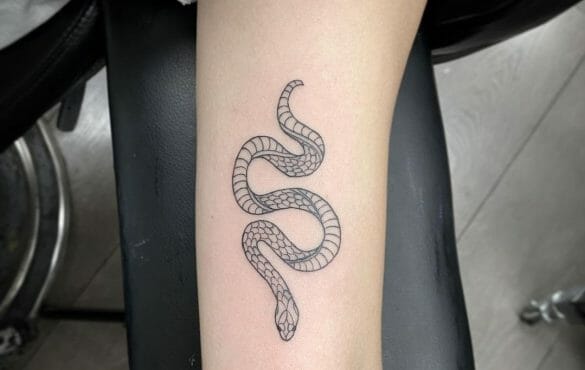 Snake tattoo designs are loved by people as a symbol of protecition and to ward off evil.

Snakes are ancient symbols of a creative life force and fertility. People get snake tattoos to represent these beliefs.

Snakes are very misunderstood creatures of the earth. Snakes are feared all across the globe for the venomous bites of certain sub-species. However, not all snakes are poisonous and lethal. There are some traditional cultures that accept snakes as they symbolize life, death, rebirth, healing, fertility, masculine power, protection from evil, and spiritual well-being. In this way, getting a small snake tattoo meaning inked can show your boldness and belief in the greater force of life. For all the snake lovers we have gathered the best tattoo ideas that have small snakes. You can also combine a snake tattoo with a skull, rose, or other flowers. So what are you waiting for? Dive in and take your pick of snake tattoo ideas with meaning that matches your beliefs.

Tattoo artists have come up with many variations and tattoo ideas involving snakes. A small snake tattoo design, like this, looks very aesthetic. This snake tattoo is inked in black fine lines with minimal shading to reflect the spots on snake’s skin. The intricate design on its entire body makes it look impressive. The head also has some minute design that adds to the character. Some people might resist getting snake tattoos because they are associated with death in some cultures. But, more people are adapting subtle designs like this backed with strong symbolism. This tattoo is placed in the center of the chest, however, it can be created on the wrist as well.

Ever heard about traditional stick and poke tattoos? Stick and poke tattoos are drawn with hands, by the tattoo artists, without the use of any machinery. They use simple needles to poke your skin with ink. Don’t worry! It is not as scary as it sounds. It wouldn’t feel any different than a tattoo machine, but can add a more aesthetic appeal to your tattoo. Hand poked tattoos are easy to customize and the best option for small tattoos. This small snake tattoo design gives ancient and evil vibes. This snake has dark oval-shaped patches on the length of its entire body. The ovals are surrounded by transparent ovals but otherwise, the entire body is black. This tattoo is placed on the upper arm.

This small snake tattoo looks charming as well as deadly! The head and tail part of this snake tattoo is covered with black-colored highlights. It gives the effect that the snake is moving. The middle portion of the snake’s body is covered in horizontal lines. These lines divide the belly into small segments. This tattoo is placed on the upper thigh. The delicate pattern and smooth shading on the sides sets this snake work tattoo apart from the rest. If you want a cool black ink small snake tattoo, then try this one.

Thinking of getting a wrist tattoo? Check out this design! This small snake wrist tattoo is drawn with black ink. The tattoo artist has done excellent linework on the body of the snake. You can see quite clearly that the entire body of this snake is covered in criss-cross lines. Even the head of the snake has line work on it. It looks like the snake has entwined itself around the wrist of the wearer. The skin pattern on this snake art tattoo is evenly placed throughout the design. Even though we cannot see the backside of the design in this image, we can imagine that it looks exactly like the remaining body. If you want a bigger, more prominent snake tattoo, you can get a similar design inked around the upper arm or thigh.

This type of tattoo, from the image, is called a black and white tattoo. It gets this name from the appearance that only the ink outline looks black, while the empty transparent inside area is considered to be white. This is a minimalist tattoo design, very simple and exquisite. The fine line work done by the tattoo artist for drawing the outline of the snake’s body is perfect. The snake is poking out its tiny tongue from its mouth. You can get this snake tattoo design on any site on the body. Snake tattoos are symbols of healing and rebirth. If you carry the same beliefs, a snake tattoo would be great idea for you.

It’s surprising how something as simple as this snake tattoo design can look so striking and cool. If you are looking for a small snake tattoo for men and women, then this is an excellent choice. This snake tattoo design is a hand-poked one. That is why it looks so stunning. The entire snake body is filled in solid black ink. This snake’s body will fit anywhere on your body. In the picture, the tattoo is drawn on the shoulder but you draw it on the side of your arm, back, and even your leg. It’s bound to stand out wherever you go.

Finger tattoos have recently come in trend. Often women and some men love getting boho-style tattoo designs on their fingers. This tattoo is lying at the base of the index finger. This design is very similar to the Hand Poked Solid Black Small Snake Tattoo but in miniature size. The snake tattoo is filled in black ink and takes up very little space on the finger. You can pick any finger to create this small black snake tattoo. A finger tattoo need not be located on a single finger. It looks best when combined on two or more fingers, as per your preferred tattoo design.

Of all the small snake tattoos on our list, this is the most captivating design! This serpent tattoo has a realistic look that makes its appealing. It is a three-dimensional Japanese snake tattoo. The snake in this tattoo design is a cobra, as identified by the pattern on the skin. The transformation of the snake amongst the folds of the collar bone looks very real. It gives an effect of the cobra sliding smoothly between the narrow branch of a tree. This is a unisex tattoo that you can flaunt perfectly by wearing a collarless t-shirt. If you want a memorable snake tattoo, this 3D cobra tattoo will impress you and everyone who sees it!

Our list of small snake tattoos is full of hand-poked, minimalist, and solid tattoos. This solid snake tattoo design has a dotted tongue coming out of its mouth. The entire body is looped are curved and it looks like the snake is perched peacefully. Some ancient cultures tell us that a snake represents fertility and strength. This is why snake tattoos are popular even today. This adorable tattoo is placed on the side of the torso. But, you can get this small snake tattoo on your arm, leg, or wrist as well.

The Gucci snake is famous in the fashion industry. The fashion store Gucci introduced it to the world. This snake is outlined in fine red ink with no colour fill inside it. This snake tattoo has loops and curves on the body and beady little eyes on its head. Many versions of this snake have been derived and spotted in the tattoo market ever since. The snake looks to be ready to take whatever comes its way. So if you are looking for a tattoo to reflect your mental strength, you can try this stunning snake tattoo. Some other ideas are a small snake skull tattoo or an Ouroboros (snake eating its own tail) tattoo.

In your search for the ideal snake tattoo, you can look for the one that you most identify with. This can refer to the artistic design, pattern, colours or the meaning that you want to portray. Snake tattoos also have deep religious connotations in many countries and are often worn by tattoo lovers as a symbol of these religious and spiritual beliefs. A snake tattoo idea that tells your story with beauty and spiritual depth is the best one! If you are looking more striking designs, check out our suggestions below.