10 Best Small Moon And Sun Tattoo Ideas That Will Blow Your Mind! 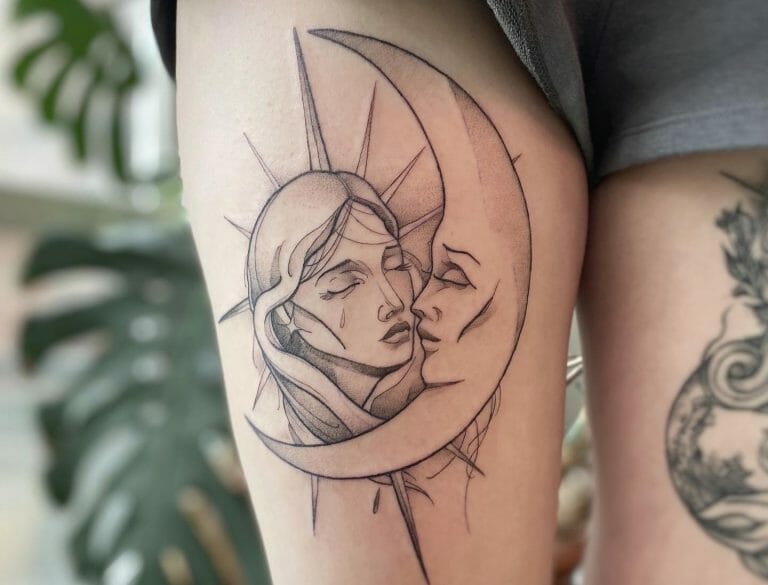 Are you an admirer of constellations and wish to get inked with the beautiful moon and sun tattoo? Here are some sun and moon tattoo ideas for your next ink!

The small moon and sun tattoo carry a variety of meanings – symbolic of femininity and masculinity, life and death, good and evil.

Evident from its symbolism, the sun and moon tattoo represent two opposing forces, and the duality in their meaning is what makes them unique. These tattoos can be recreated in a variety of artistic ways, making them a sought-after design for tattoo lovers.

The sun, situated at the centre of our solar system, is the source of energy for all living beings on our planet. It is also the source of light for the earth and all the other planets located in the galaxy. Representation of the sun in the form of a tattoo usually symbolizes the guiding force of light. It can also be interpreted as a sign of rebirth since life wouldn’t have existed without the presence of the sun. The Celtic sun symbolism is related to the power of healing and the source of life. In ancient Egypt, the sun was worshipped as a deity. Moon is the only satellite of our planet and its gravitational pull results in the formation of high tides and low tides on earth. The moon represents the feminine energy of motherhood and fertility. It changes its appearance through the different stages of the lunar cycle and the stunning moon phases tattoo is representative of the endless cycle of life and eternity. The moon tattoo meaning is also associated with wisdom and hidden power. The union of these two celestial bodies in the form of a tattoo stands as a symbol of cooperation and balance in life similar to the way they reside together in outer space.

The sun and the moon tattoo is enriched with powerful meanings but it is up to the individual wearer how they would like to interpret the union of these two celestial bodies or as part of a whole constellation of heavenly bodies. These tattoos can be beautifully drawn on the skin using different inking techniques. Thus, it gives the tattoo artist the perfect reason to explore their creativity on the canvas of the skin. Take a look at the following sun and moon tattoo ideas!

Here is a beautiful thigh piece of the sun and moon tattoo in monochrome. The tattoo artist has given a face to the sun and the moon, making it visually enticing. It personifies the celestial bodies and gives them powerful imagery. The rays emerging out of the sun are shaded with dot work detailing using black ink. The crescent moon is illuminated by the rays of the sun. Apart from your thighs, this detailed design can also be placed on your arms.

Here is a great alternative to the sun and moon tattoo if you want to bring a colourful glow to your tattoo. The minimal detailing with fluorescent ink gives it an impressive look. The moon is personified as an old man with a beard. The green hue on the back highlights the entire design. The dot work detailing at the bottom gives it a mandala effect and further enhances the beauty of the tattoo art. In this moon and sun small tattoo, the celestial objects are shown to be as old as time.

As a kid, many of us made the sun look like a flower. Almost, in a similar nostalgic memory tour, the sun is placed at the centre of the design with its rays drawn like the petals of a flower. The bright shades of orange and yellow bring striking contrast to the design. The eyes drawn on the sun and moon are detailed with blue. The mandala designs at the bottom are creatively inked with dot work detailing. The mandala design along with the sun and moon tattoo creates a beautiful blend representing balance in the universe.

If you are looking for colourful sun and moon design ideas then here is the perfect choice for you! The simple yet stunning design shows the sun and the moon intertwined together on the arm of the wearer. The contrasting shades of yellow and blue used in inking the celestial bodies make the design even more eye-catching. The tattoo is outlined in black ink to create a contrast.

Here is a beautiful sun and moon tattoo design illuminated with the vibrant colours of the rainbow. The celestial bodies are kept simple in black and have minimal detailing. The rainbow is drawn in a watercolour inking style. The subtle flow of colours connects the sun and the crescent moon tattoo. It seems like a representation of a rainbow-lit sky. You can also incorporate clouds or stars to make the design even more detailed.

Sun And Crescent Moon Tattoo With The Third Eye

Here is an amalgamation of different symbols and celestial bodies in one frame. The third eye tattoo is placed at the center of the design with the rays of the sun emerging outward. The waxing crescent moon, highlighted in a shade of yellow, outlines the eye. The different phases of the moon are beautifully inked in a simplistic way at the bottom of the design.

Sun And Moon Tattoo Inside An Hourglass

The upper globe of the hourglass portrays an image of a sun-lit sky and splashing waves. It is detailed with dot work. The bottom globe paints a picture of a moon-lit night along with twinkling stars. The moon, stars, and clouds are placed on a black backdrop to create a beautiful play of contrast. The celestial bodies placed inside an hourglass depict the passage of time and the endless cycle of life and death. The flowers and the leaves placed adjacent to the hourglass add to the beauty of this design.

Here is another great alternative to the hourglass tattoo featuring the celestial bodies. The simple yet detailed design portrays the sun and half moon on the two globes of the hourglass. The striking shades of colours used in the design give it a remarkable appearance. Moreover, the third eye, inked on the top, brings an air of mystery to the body art. It also symbolizes the intuitive instincts of the wearer.

Here is a simple sun and half moon tattoo inked with a dark tone of colours. It seems like half of the moon’s surface is illuminated by sunlight, giving it a golden hue. The sun, inked in the classic orange hue of the sunset, has its eyes closed. The tattoo artist has portrayed a scenic beauty of a sunset in the form of body art. The stars, inked in a sparkling shade of gold, add a charm to the tattoo design. The dark clouds, shaded with white, create a striking contrast. You can place this detailed sun and moon design on your shoulder or thigh where there is enough space to ink the details.

If you wish to combine your sun and moon tattoos with other designs then take a look at this one. The sun seems to give a passionate kiss of affection to the moon while the clouds surround them in the background. The sun is shaded in orange and yellow ink and highlighted with white dots. The waning moon tattoo is inked in a shade of blue and outlined in white to create a contrast. The clouds are beautifully coloured in a bright pink shade representing a celestial realm while the twinkling stars popping out of the clouds are inked in blue.

If you are in search of a unique sun and moon tattoo idea then an eclipse tattoo can be a great idea for your next ink! Here, the moon appears between the sun and the earth, blocking a part of the sun’s rays. The artist has inked a partial solar eclipse where the sun is partially covered. The moon is filled with black ink and the rays of the sun are also emboldened in black. You can incorporate colours to your eclipse tattoo to make it even more appealing.

Sun And Moon Back Tattoo

Back tattoos are quite in vogue since it can be placed on a wider surface area and offers a lot of creative options to explore. Here is a beautiful back tattoo design in a watercolour inking style with subtle floral detailing. This fine line tattoo is inked with a lot of precision and the blend of colours gives it the appearance of canvas art. The sleeping moon rests on the side of the design while the sun is placed at the centre. The rays of the sun are detailed with black and white stripes creating a beautiful contrast.

The incorporation of the Yin Yang concept to the sun and full moon tattoo enriches the meaning of the design. Sun is inked in black on a white backdrop while the full moon is beautifully shaded in white on a dark backdrop. The silhouette of two giant wolves represents Skoll and Hati, the two giant wolves that chase the sun and the moon according to Norse mythology. The stunning play of contrast adds to the beauty of the tattoo. In Chinese philosophy, the concept of yin and yang describes how two opposites or contrary forces are interconnected in the natural world. Thus, it aligns with the interpretation of the sun and moon tattoo design.

A matching sun and moon tattoo, representing the union of the two celestial bodies, can be a unique tattoo idea to celebrate the bond between two lovers or best friends. The sun is emboldened in black and shaded in red. The moon, on the other hand, is inked in blue to create a contrasting duo.

The sun and moon tattoos are a top pick for many owing to the variety of designs along with their deep interpretation and meaning. Both the sun and moon symbolize two defying forces and have different meanings across different cultures. Their association represents harmony or balance in nature. You can add a couple of stars tattoo or incorporate a beautiful galaxy as the backdrop of your design to enhance its look. Here is a curated list of sun and moon tattoo designs to get you inspired for your next ink!